The C7 team has now released the second preview of the "Carthage" milestone. This is a general enhancement over the "Babylon" release, and recommended for all newcomers.

You can download Carthage Preview 2 from this link, for Windows, Mac, and Linux.

There are significantly more behind-the-scenes updates in Preview 2 than in previous releases, and this in part reflects the maturing of the project and the need to start building more solid foundations for the project to build upon. Thus, while it has been too long since the last release (just over three months), there aren't as many highly-visible improvements as in previous releases.

Nonetheless, there still are some user-visible improvements. I'll break down the improvements in Preview 2 by theme.

The first main theme in this release is improved combat mechanics, added by @Flintlock .

These include defensive bombard, retreating and retreat probability, terrain-based and river defensive bonuses, healing while resting, and experience levels/promotions. Combined, this means that a significant part of the combat mechanics present in the Ancient Age in Civ III are now present in C7.

Another significant update is that city production is now based on actual tile yields. This means that grassland with cows is more valuable than tundra. The AI will take this into account when deciding where to build their second and subsequent cities.

AI improvements are another theme of Preview 2. In addition to the AI taking terrain into account when building cities, there are several other improvements:
I'll be posting a more detailed dev diary on this later, but in general we are trying to build the AI in a way that will be amenable to extension at a later point, and in which different aspects of the AI can interact with each other, as seen with the strategic priorities affecting what is built.

There is still a lot of work to do to build a compelling AI opponent. It will need instruction in many more topics. The way I've been thinking of these is as "education modules". In this preview, we've taught the AI how to explore, but it still has no education modules on how to deal with barbarians, or how to engage in combat in general. In future releases, the AI will have more and more education modules, and eventually it should become competent at playing the game, at least some of the time.

Most of the AI changes were made by Quintillus, but the pathing improvements were by pcen.

New contributor kright has improved city placement. Now, instead of only mountains forbidding cities, which terrains allow cities is looked up in the scenario configuration.

Flintlock has also added the smoke effect to animations.

Here's a screenshot of a Carthage Preview 2 game from two days ago, featuring three AI and one human player on the same continent. The cities are spaced at a similar cadence to a Civ III game, and the AI has left the most desert and tundra heavy areas for last when settling. 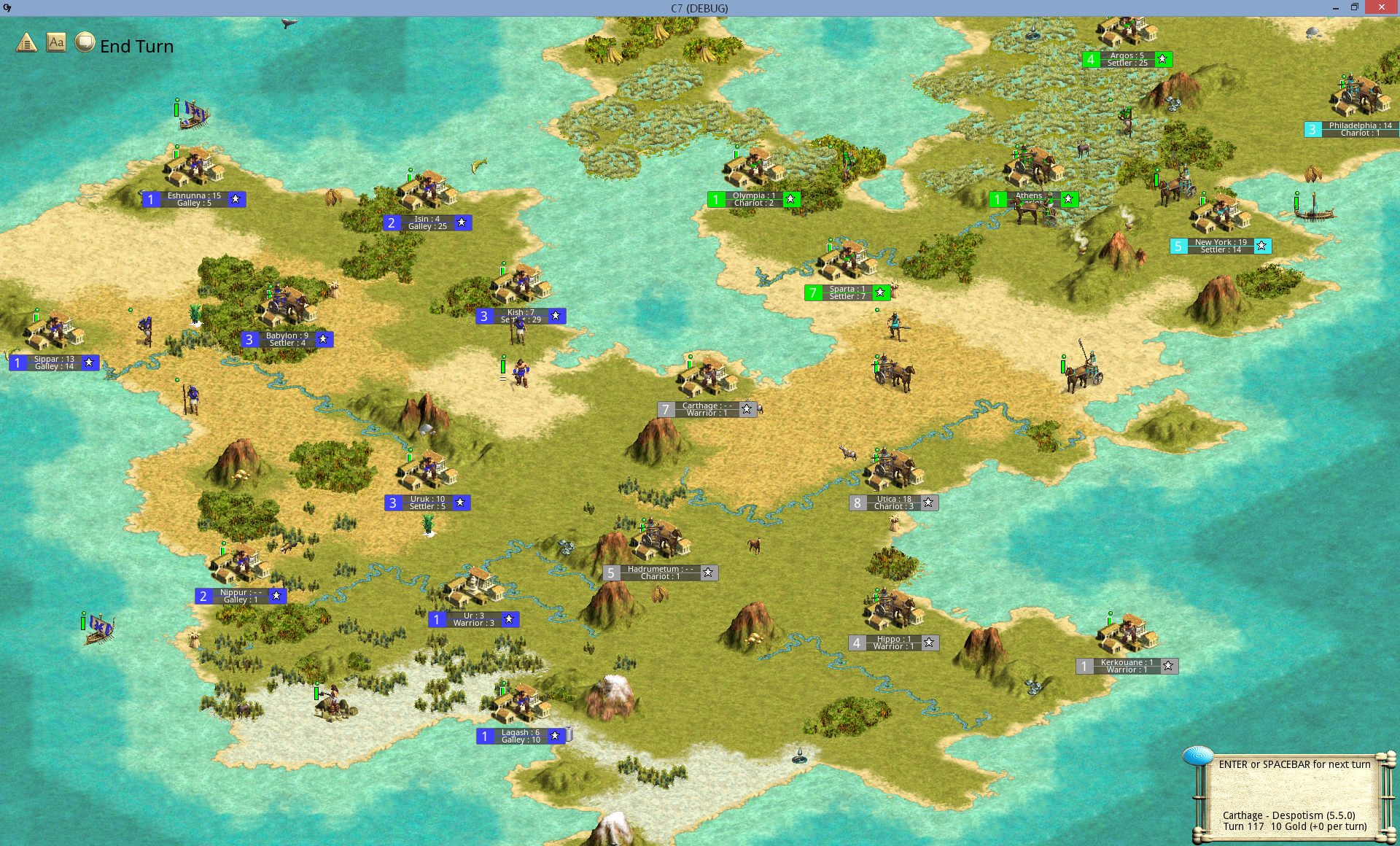 Quintillus snuck in a could bug fixes before the release:
Behind-the-Scenes Changes

In addition, a large number of behind-the-scenes changes have been made. Some of the less technical ones include:
Statistics

Broken down by category, our progress is:
At a lower level, Carthage Preview 2 contains a total of 182 changes, by @Flintlock , @Quintillus , @WildWeazel , pcen, and kright (we're still trying to convince the last two to join CFC

As always, it depends somewhat on what the contributors find most interesting. However, two particular goals are worth mentioning.

One is reducing the bug count, which thanks to more zealous documentation has now reached 20. There may be an update in a few weeks that reduces this. It is sometimes a blurry line between what's a bug and what's a not-yet-implemented feature at this point, but part of becoming a more mature project is making sure the bugs don't stick around forever.

The other is integrating the first community art. We've been in contact with Plotinus and Kyriakos about this, and will be featuring some of their unit and PCX work, respectively, as the first art outside of the title screen to ship with C7.

Excellent!!
Try the Anglo-Saxon scenario... Or can you build an empire of Africa? A list of units. Sensible religion discussion.

A magnificently enlightening update, in both form and content


An Intro To & An Encyclopedia Of Modding
FUBAR Editor Documentation
The Big Question - How Does The AI Choose Which Units To Build?​

Just to note that I created a thread for previews of the new graphics, at https://forums.civfanatics.com/thre...city-sets-for-the-civ3-future-project.678102/
"A life without festivity is a long road without an inn"
Demokritos of Abdera