(AOM) said:
Thanks for the feedback, it's great to know you're interested in the mod! That's a great idea for Observe Fasts, it makes more sense with the name of it, for sure. We can change it. I'd like to know what you think of the balance of the tenets after playing with it for awhile, if you have time to post again

Would it be possible for you to add Tier 0 beliefs like Monotheism for example or any others that people could suggest.

The More Religious Tenets mod is updated now. The update includes Tier 5 religious tenets, a religious deed, tech requirements that tie the tenet tiers to the era system, and modifications to many of the tenets we added in the first version. The mod has been tested in games with and without the most current patch, it works in single- and multiplayer games, and on Mac and Windows. You can download it here: https://gc2021.com/showthread.php?tid=59

The download post includes a list of tech requirements, a description of the deed, and all the tenets (including those which have been modified from the last version). 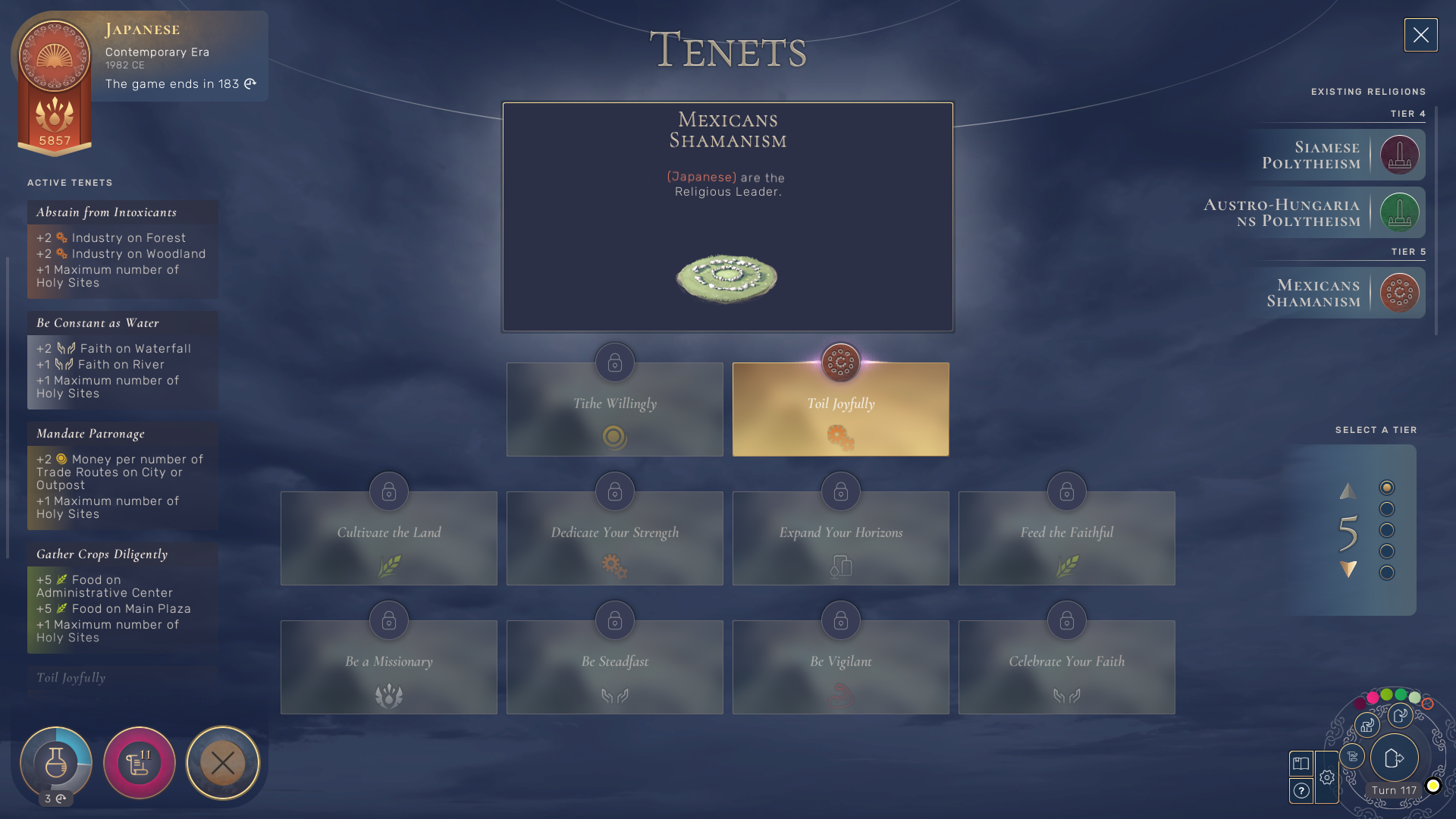 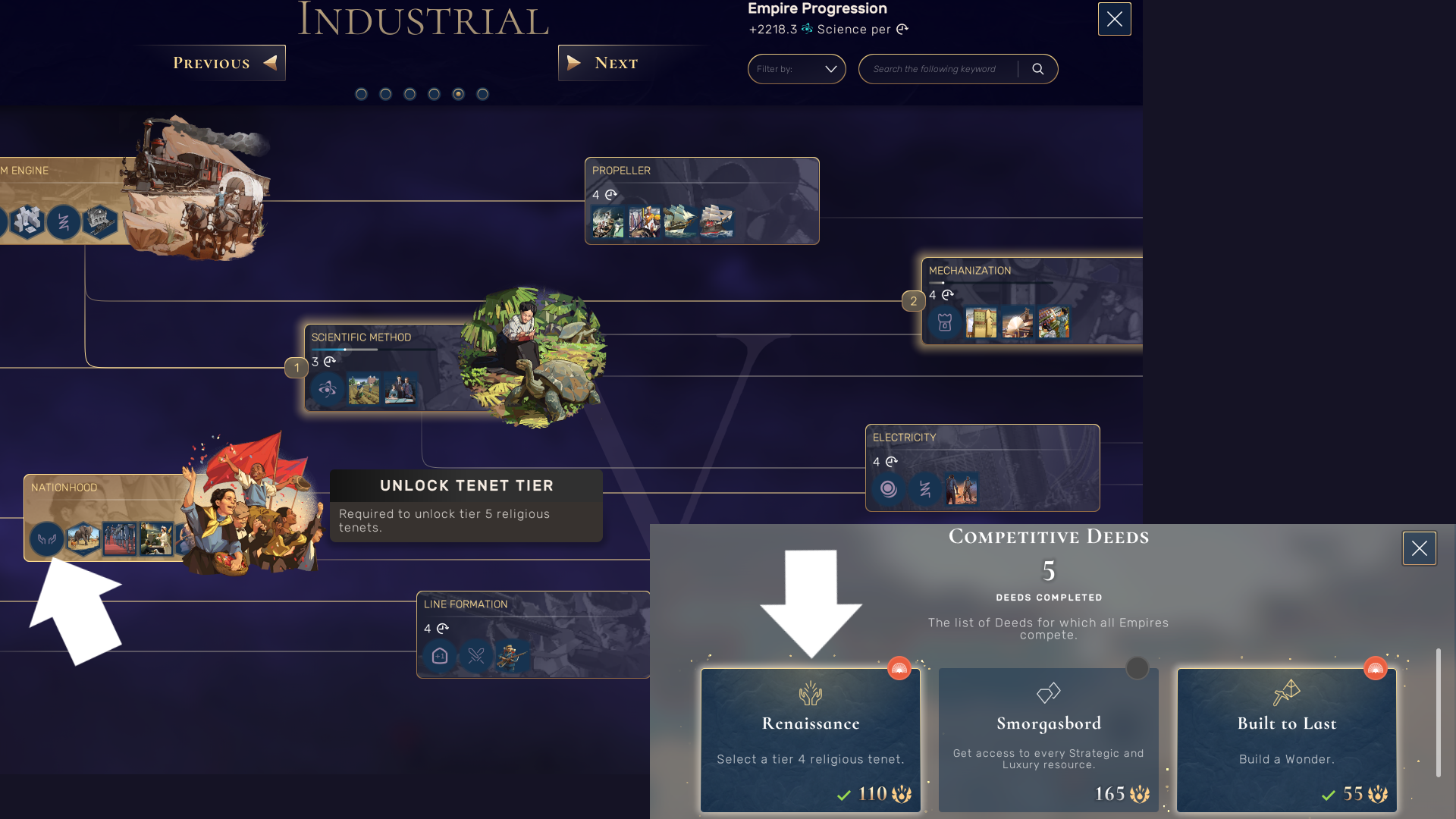 @Golden Falcon We could probably add new Tier 0 beliefs, although we haven't yet attempted to.

I think adding it to Tier 0 is better because it gives more options from the beginning and can be a stepping stone to some of those other tenets and religions that will make more sense playthrough wise.

Congrats on the new update! Can't wait to try it out!
T

I just entered the last era and there i unlocked a tenet tier 6 ; but there is no tier 6 in the religion window.
Is that from your exellent mod ?
N

from a historical standpoint, monotheism shouldn't be an option until the late ancient era
G

NombreyApellido said:
from a historical standpoint, monotheism shouldn't be an option until the late ancient era
Click to expand...

Except this is not a historically accurate game as all of these cultures did not exist at the same time, nor did they combine in any combinations that we come up with. Additionally, many of these cultures placed in the game were not polytheistic or shamanistic either so, having it there at the beginning does make sense. Additionally, those other religious beliefs and tenets from ancient times are already in the game, while this one is not.
Last edited: Nov 29, 2021
N

i can't deal with this much wrongness, sry. please don't quote me ever again. thanks bye

Hi all, sorry for the delayed reply, my spouse and I were a bit under the weather and have some catching up to do.
@TaylorItaly, yes, code to unlock Tier 6 was added as we started looking at new tenets for this tier, and it was accidentally left in when we shared the Tier 5 tenet update. We will upload a version of the Tier 5 update that doesn't have a Tier 6 unlock with no Tier 6 tenets. Thank you for pointing this out.
Re: Monotheism. Obviously, the simplest route to including Monotheism would be to add it as a choice at the point when players currently can select Polytheism or Shamanism. However, as pointed out, this could be construed as jarringly ahistorical in a game that already has some fairly jarringly ahistorical elements. Further, doing so would cause religion to work differently than other HK systems work (such as the military and infrastructure systems) which tend to flow in a fairly historical fashion (i.e., you can't develop crossbows or grain silos in the Ancient era). We're still reading more about the development of religion and thinking about how best to incorporate its various strands while we plan the 6th tier tenets. At this point, it isn't even clear whether Polytheism and Shamanism should appear at the same time (there is at least some evidence that Shamanism significantly predated Polytheism).

Hope you feel well again before too long!

On the whole Polytheism/Shamanism/Monotheism debate, the least I can say is it's been fun to read up on the evolution of religion. Polytheism makes the most sense to me as a documented, historical practice. Even Shamanism seems a bit more extrapolated. As for Monotheism, it appears to be a later development rather than a core longstanding belief. From the gameplay perspective, I interpret Polytheism as representing an organized state religion and Shamanism as a more autonomous collection of beliefs. In practice, this translates to whether my cities will have more than two attached administrative centers.

One idea to incorporate Monotheism in the same category could be restricting the number of religions that can be founded in each era up through the Early Modern or so. For example, one culture takes Polytheism, another takes Shamanism, all other religions are deferred one era. Monotheism could start with a Tier 1 Tenet choice and the fanatical +50% faith modifier for 10 turns to establish the new religion. Not sure what the other choices would be!

For whatever user error, I ended up with the old version during my most recent play-through. That said, I've noticed some trends. There's a good balance between a plurality of Tier 4 religions and the rise of a One True Faith scenario. In both cases, it helps illustrate how the tiers should scale. For huge maps with 800-1500 believers, the burden on upper tiers is to keep pace with larger numbers of believers and the challenge of representing global reach. This is were televangelism seems to really fit in. This suggests that the upper tiers ought to scale with population, map size, and concentration of beliefs, whereas the medium tiers have the challenge of accommodating both early and late peaks on smaller maps.

Thanks again for you and your spouse's hard work!
N

if a new choice is being considered for the early game, let's not forget about animism which is the creed of the independent factions

i mostly go with zoroastrianism, accepted to be one of the earliest monotheistic religions. it goes neatly with my usual achaemenid empire selection. also there's an eternal flame

Thoughts based on play-through of update (with sixth tier):

Tiers are much more competitive! First game where I tailored tenets to a strategy rather than just choosing optimal beliefs. Observe Fasts is great. It makes just that much difference early on and then scales well through the mid-game. Tier 5 is very powerful!

Personally, I would prefer that tenets manipulating terrain yields be exclusively on the early side, including T3 Seek the Earth's Bounty and Purge Idleness, T4 Gather Crops Diligently, and T5 Cultivate the Land.

While I asked for more holy sites, I'm conflicted! It's unclear to me whether they are too powerful or even if they accelerate the snowball. In my game, I didn't trade, which helped keep religious blocs distinct.

The follower thresholds did not appear to scale beyond ~225. After the Medieval Era, all the beliefs were fairly automatic in terms of having enough followers.

Tying religious tenets to tech works well to pace religious development, but then it also rewards a fast tech rate, hence snowball. It occurs to me that maybe tenets need to be independent of holy sites, especially if more tenets are to be added.

On that note, some other techs that seemed candidates for tenets include the following:

Ancient:
Irrigation: role of religion in organization of river cultures.
Writing: religion as tied to impact of writing.

(2-46a) Counterproposal: Integrate Tourism process as an Order Ideology
2