​
The Woodland was in the middle of internal struggle. The ancient Eerie Dynasties lost control over majority of their traditional territory after warring each other in eternal hunger for more power. Now, they have a civil war among them, invading armies of Marquise de Cat of the Feline Empire and rebelling inhabitants of woods, who united themself in Woodland Alliance. These outcast hide their forces deep in woods, but they need to expand to clearings in order to control the Woodland. Clearings used to be places of civilization and safety among woods filled with vile beasts, but with the violence endangering the very existence of many of them they became a place for various riff raff to thrive. The adventures traveling from clearing to clearing with no obvious agenda has become known as Vagabonds.
Will it be you, who will manage to return peace to the Woodland?

Setup
The game is inspired with asymmetrical popular board game Root. That means there will be multiple factions, each with their own goals. These factions are all mentioned in the flavour text. Other mechanics of this game will be fairly standard. Some characters might have special abilities and there will be two phases. You can discuss with other players in the thread during daytime and character or faction powers will take place during evening. Daytime ends with a brawl, which should lead to elimination of one or more players (in case of a tie). 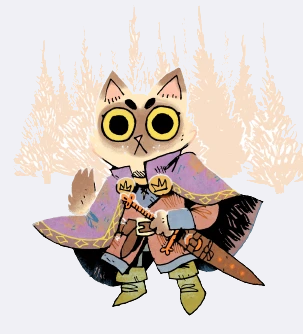 Under the wise command of Marquise de Cat, you arrived at a clearing to burn and rage. At the end of day, this will be your new stronghold, from which you can continue the conquest. Forest animals lack iron discipline of your legion and while it won't be an easy task to take control, you have all means necessary to accomplish it.

Your powers: Your vote is your sword and shield.
Your faction: Feline Empire
Your win condition: Eliminate all other factions.

Standard mafia rules
-Plurality elimination only
-Private communications outside of chats provided by the host are not allowed
- Do not edit your posts
- Use Vote: Player to vote and Unvote or Cancel to cancel your vote
-Post at least once every phase or you'll get replaced
-Most other standard mafia rules apply.

Basic Info
-Days are 48 hours long, nights 24. You can post at night, unless specified otherwise.
-The game will start in 3-5 days after filled
-SOD/EOD at 9 PM GMT
-17 players

You can post now. If you have any questions, send me a pm. Day 1 ends in roughly 50 hours.

READ THE OP FOR THE VANILLA PM!

No pressure but this game will probably be amazing.

I guess since the felines are vanilla town, I am the cat cop. Meow meow.
"You fools I am not the Town Cop/Mason/Tracker/Doctor/Jailor!" -LordArgon

Wassup fellow catfriends and evil guys, I have arrived!

In other news, can I just make sure I got this correct:

The Nyaat-so-heroic hero has arrived!

Guys I would like to share my n0 peek: Pzelda is a GM. Do with that what you will.
"You fools I am not the Town Cop/Mason/Tracker/Doctor/Jailor!" -LordArgon

How are we all on this fine meowrning?

Awww, I love it already! All the art is so adorable.


LordArgon said:
I guess since the felines are vanilla town, I am the cat cop. Meow meow.
Click to expand...

And yet, you are a raccoon. How interesting.
"You're worth more than what you can give to other people. You deserve love, too." - Mara, She-Ra and the Princesses of Power

"I am a Catalan" -Pau Casals. Visca Catalunya lliure!
Robert Can't has the most adorable avatar on CFC

In a word: Illyria

Morning everybody! How we doing today?

Vote: JohannaK
Outed, there is no art yet, unless you got a pm, which would not make you not town.
Winner of

Hey leave no alone. They are my mason partner that I get as town cop.
"You fools I am not the Town Cop/Mason/Tracker/Doctor/Jailor!" -LordArgon

Okay be honest guys - have I made a huge mistake coming here to play?

LordArgon said:
Hey leave no alone. They are my mason partner that I get as town cop.
Click to expand...

A town cop who is also a mason, you say?

Ace Marvel said:
Vote: JohannaK
Outed, there is no art yet, unless you got a pm, which would not make you not town.
Click to expand...

there is in the op

Master Radishes said:
Okay be honest guys - have I made a huge mistake coming here to play?
Click to expand...

What could go wrong?

Vote: Lord Argon
you can't just steal my gimmick like that
otherwise the only gimmick i'll have left is making cat noises
You must log in or register to reply here.

Invitation to the Mafia Championship