Welcome to your BtS SGOTM 26 Team Thread. Please use it for all internal team communication, turn logs and discussions. Subscribe to it to receive notifications, and do not visit the other team threads for this game until you have finished.

The Maintenance Thread is now open for this game, where teams and staff may post non-spoiler information of general interest. You will find the Game Details in the Pre-Game Annoouncement Thread. If any changes occur in the game settings or rules, they will be posted in that thread.

Please wait until your team leader/administrator/scribe has reserved a couple of top posts in this thread for game admin information. Then post here to let your team know you have arrived.

A reminder.
We are not allowed to visit other teams threads.
Please bookmark this thread to avoid any misclicks.
At some point we will have a test game.
We are not allowed to open other team's save. Albeit I am not sure that is now possible.
I think there is a new version of Buffy out.
Try to leave game in Pause mode when you upload. This avoids any accidenttal moves.
No reloads allowed. If we accidentally delete/lose a settler that is in effect game over here.

My love for you civ 4 burns like a dying phoenix

Buildings we need to build in every city:
Dun
Temple

Buildings we need to build in specialized cities:

The following cities absolutely need to be coastal:
Prophet City

Added starting pic in my first post (in spoiler).

Before seeing more scouting, i would say cap should be founded with the settler around gems, sheep, rice etc.
Looks more central than the furs spot, and we need palace culture more urgently. It's also stronger long-term with those gems (furs are actually pretty crappy besides early commerce).
2nd city already has it's best tile (cows) in first ring.

Quick test game shows the 2 cities will not be connected (1 tile culture gap on river).
Starting with Agri, hunting and fishing..gems city could at least improve rice before AH.
If cap goes west, deer and more furs could be improved (+ culture on crab), but gems city looks much better long term.
+ gems city would be worthless until monument culture.
Last edited: Apr 28, 2020
Beginner help guide for Civ IV

Starting saves are up, i will pause and have a look (uploading new with pause soon).
Okay done

There are 770 land tiles i think, last number not showing correctly on my screen.
Demo:
Spoiler : 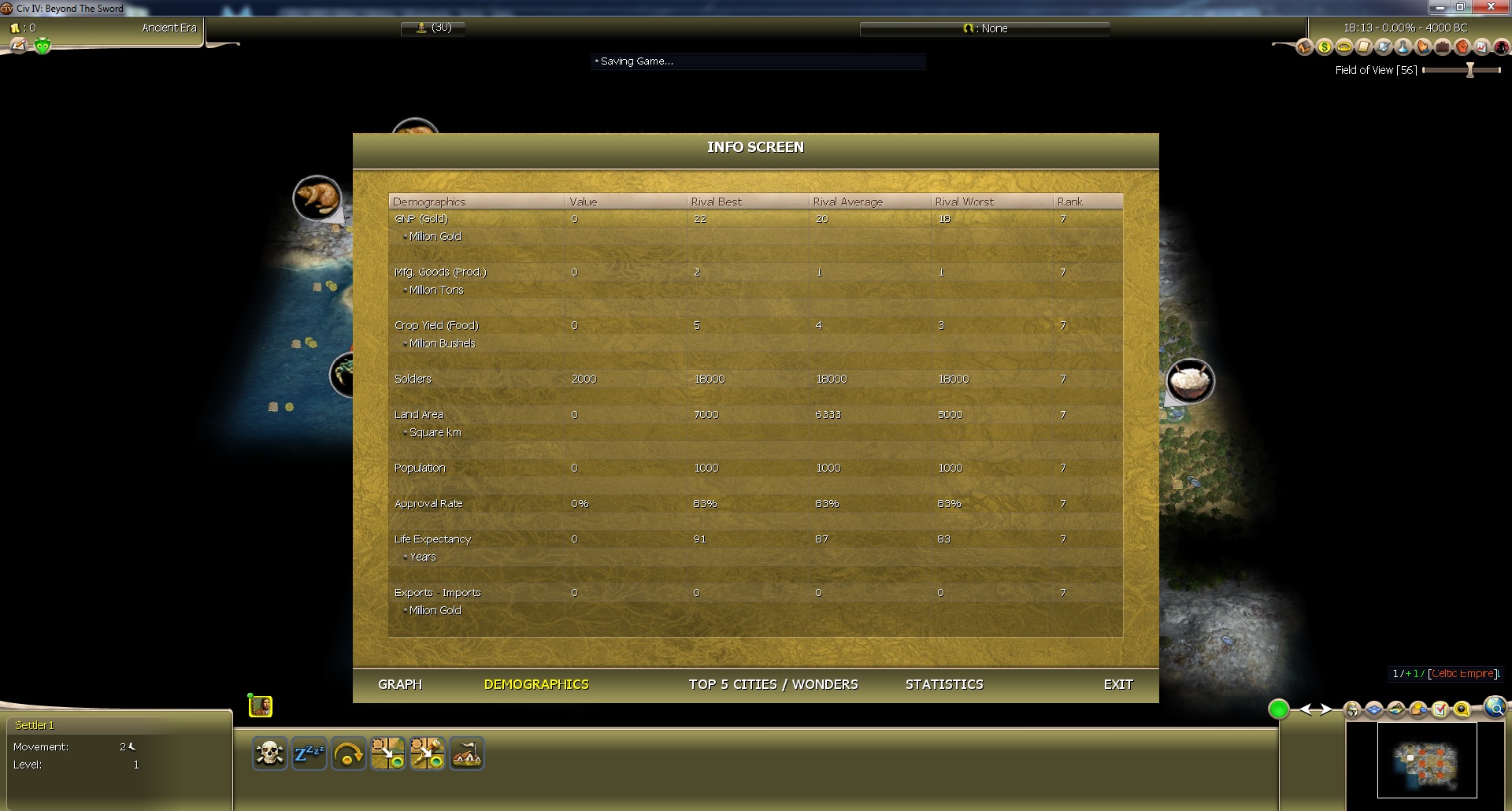 AI caps have been pre-settled. Just to confirm, we start with Fishing, Hunting and Agri (means bit cheaper AH).
Nothing suspicious on Relis or Corps that i can see. Unit costs are 1gpt for us currently, so 0 when settled.

Started work on a test game.

Uploaded, Buffy and AIs are locked in peaks to not disturb.
(i added test game markers, but forgot them in the real game)

While already there, i tested that AH would take 13t with 2 cities..not so bad, worker in coastal city 1t too soon and we can pick if we want food or

overflow by delaying him (and working commerce for 1t), or not.
If gems spot is made our cap, worker could head to sheep first.

Note the GNP figures here. Look high. Guessing each Ai starts with an improved resource. Looks like most AI already have city settled. 1 pop. Could have free buildings I guess.

5k land area could indicates a coastal start. Wonder how many settlers the AI might have?
My love for you civ 4 burns like a dying phoenix

I saw NZ recent post about the difference between the starting shot of the original announcement and the new one. Really just the amount of visible tiles, with the old screenshot revealing quite a few more tiles in the North which is basically a whole lotta nothing...more sea tiles to the N and tundra/ice to the NW..no resources. The original thread is still available a few post below. 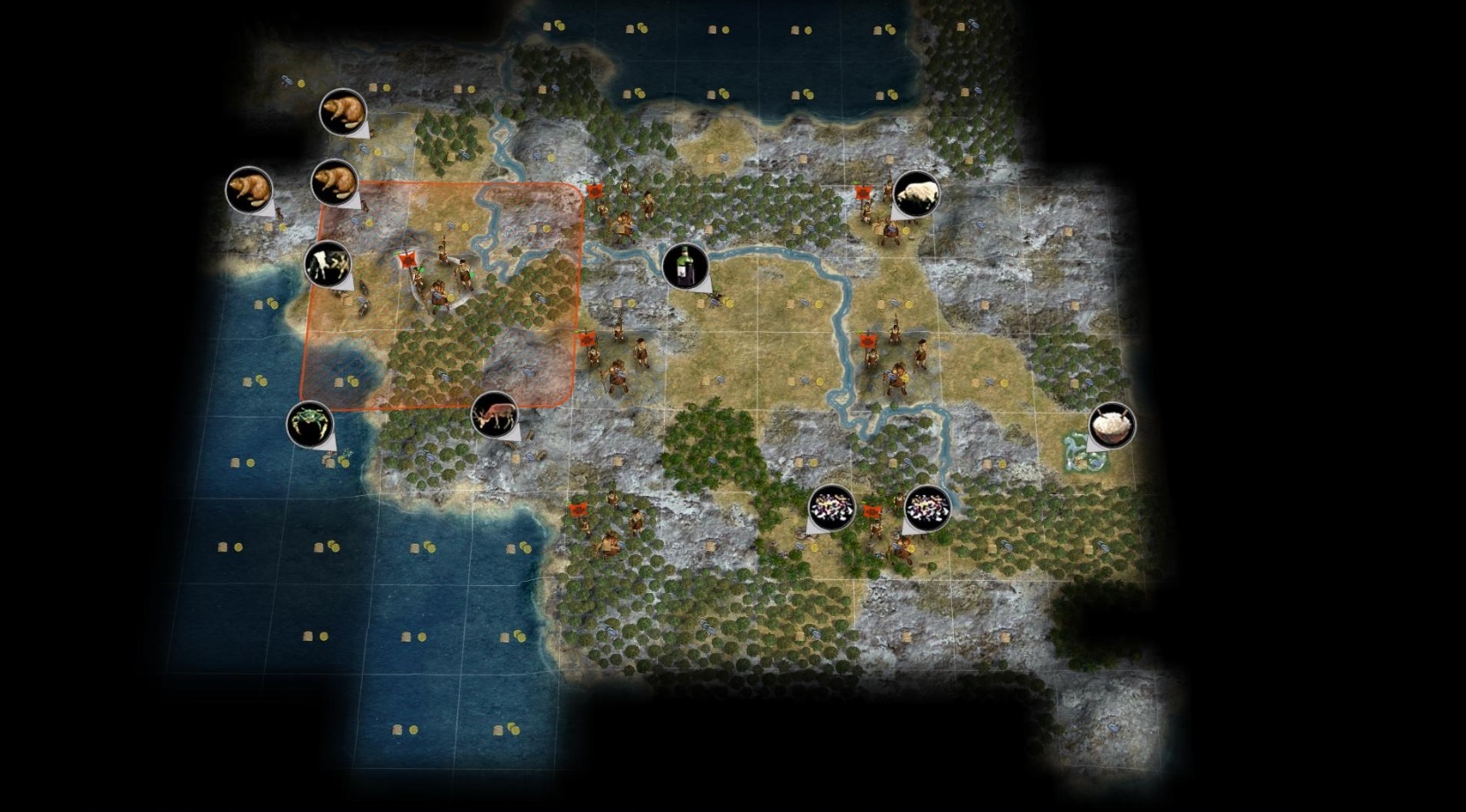 Our first decision is scouting, we have 5 settlers that should head out while 2 are in okay spots to settle.
Since we have time until we really need them for cities, we could send 2 west (looks small now, but could get bigger) and 3 south/east.
Something like this
Spoiler : 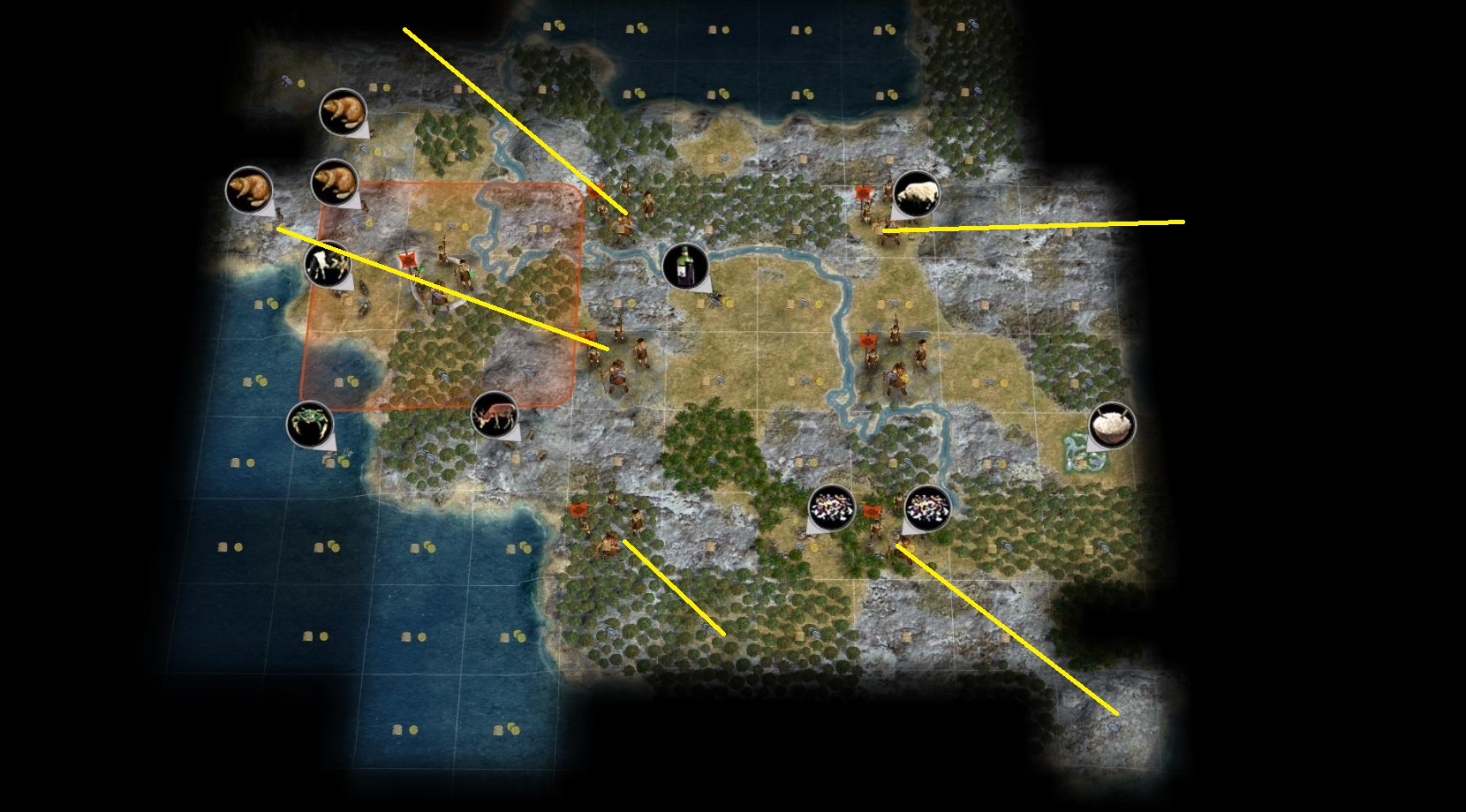 Hi y'all! Reporting in.
Thoughts on settlement:
I like the idea of settling the gems city first and thus making it our capital. I also agree to settle cows 2nd.
Absolutely use the other settlers as scouts (just like any other game) first
Last edited: May 1, 2020
PR jester

Hiya, yup my thoughts.
But we can scout first.
Beginner help guide for Civ IV

Yep..food sucks, but given this map it's best we can do.

I did not realize the saves were already up. Looks like the Homies have already played a turn. We probably need some testing before we even think of that, but we could designate someone to open the save, pause it, examine fog a bit more, and upload.

The two cities should be connected I think, but we will be in deficit research from the start. Question is how many cities can we sustain so early.

Ofc,right now I don't really see any other city spots.

I see now. that it shows a "score", but the "start" link threw me off.

Ah..I did read it yesterday but missed that bit...need to read through again and the rules.

Assuming we will move extra settlers and whatever units before settling anything, I suggest that the settler NE moves 2XSE first. The far NE looks pretty crap in immediate area, but moving 2XSE reveals some coast and land tiles that may provide some insight on turn 0

Settler on the Gems? I assume we would move him as you already outlined, My...seems fine to me.

To confirm, we have no other units but settlers on the map?

Not that we would not settle another coastal city but why is a 2nd a must?

I already uploaded with pause

But no real game markers yet.

Please read all my posts Lymo, i did some tests on AH, no river connection (culture gap) and so on.

First we should decide on initial scouting with 5 settlers, thoughts on my arrows map?

Agree Tonny, i assume you mean the gems settler too Lymo?
Oh i see, yep we can move that one too.
Okay on 1S deer. 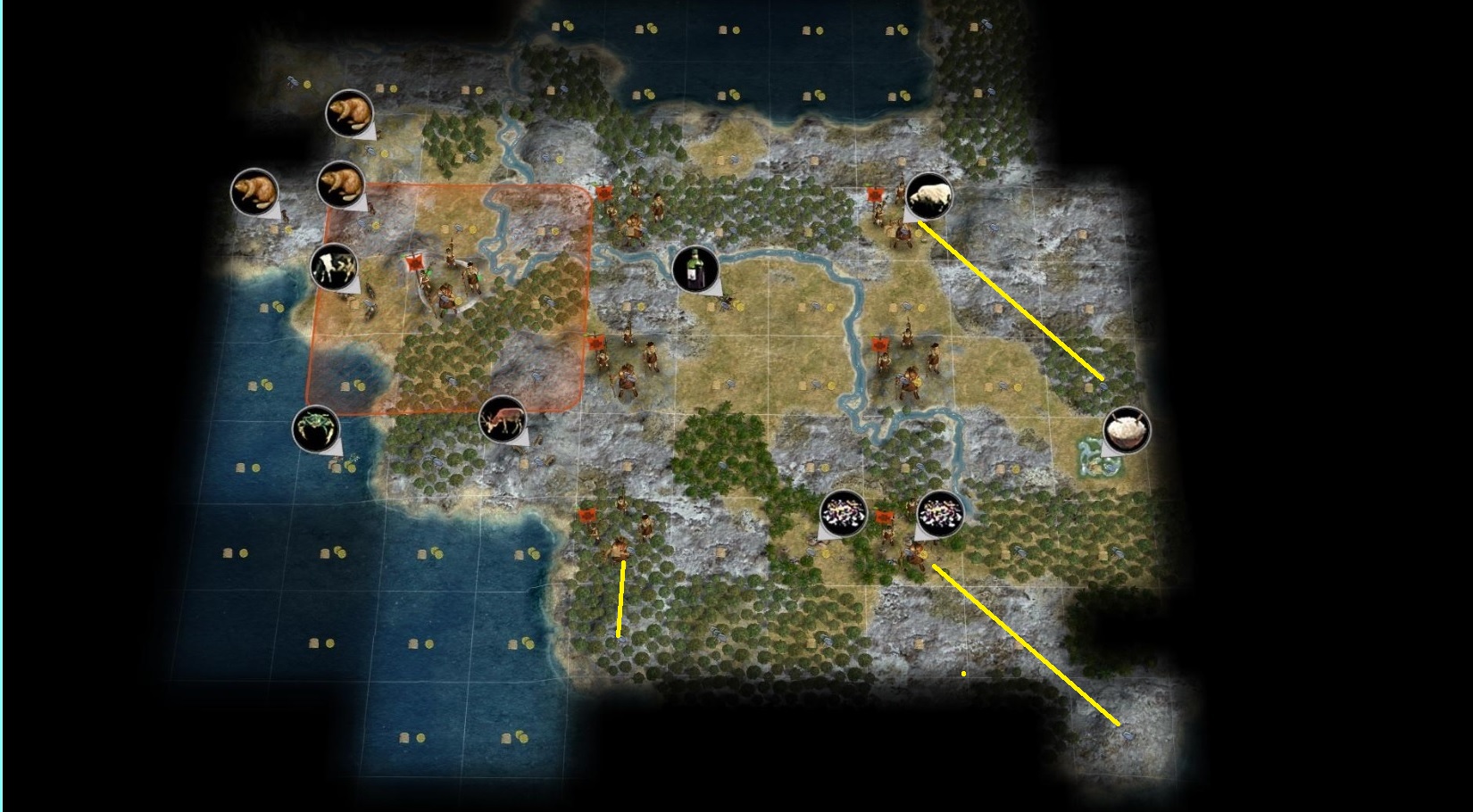 Updated map with moves we have so far. Yep only 7 settlers.
No gold cost for 5 scouting settlers, just checked on test game.
But imo the remaining 2 will not help us with settling on T0, and could be moved after cities are founded.
Yep no barbs.

Main concern is def. how we will do that, all else looks like details for now.

No vassals in options, Tonny. Research will all be ours or tech trading.
Having some trading partners could be crucial.

Anyways we should think about all that later, early we can only keep in mind that
a) wars are pointless with auto-raze until we need to unlock HE/WP, or if we need that space
b) we cannot afford any bad or even just average cities if we settle those 2

Imo, we should only scout with the gems settler and see what (s)he will reveal.
I'm okay with deer settler 1S
I agree with Lymond to send the sheep settler 2xSE first, will reveal more close to the Rice

Just a reminder, we need to find at least 1 more spot for a coastal city.
There are no barbs in this game, right?

I can't see any moves for the remaining 2 to help at t0 as well.
I do have suggestions for them. Settler nw of wine heading nw and settler sw of wine 2xne.
Last edited: May 1, 2020
PR jester

Broadcast Tower - Mass Media or Eifel Tower (via Radio) ....Mass Media is later than Radio but quite cheaper

I think that captures everything of note. Superconductors is the latest of all required techs and most expensive. (edit: Industrialism and Superconductors have relative same base cost though Ind is sightly early)

How likely is it that an AI could vassal to us? We could go conquer the world and go for conquest through vassaling. forgot that vassaling is turned off
West Point is a pain to get. We need a lvl 6 unit.

you do the honors fippy

conquest is indeed not an option now with vassaling turned off.

GG guy can get lvl 6 easy..not worried about that

Corps could possibly become of great import here like Sushi/Mining....or simply not. Only 3 resources visible now but maybe NZ left us a Mecca somewhere

Too bad Gumbo not here, but I'm up for making the initial settler moves now just so we have that information.

I agree that each city must count and be valuable. Total crap visible now other than the 2 starting cities.

Wars probably will have the primary purpose of ransoming techs and gold from the AI. We won't gain cities and ; therefore, no land or pop for score or to improve overall research. I don't think Conquest VC is even prudent to consider here. We want AI friends to trade with/trade routes and a clown or two to pick on.

You've already opened the save so go ahead and move the Settlers, My

I'm full Green on that. Just don't settle yet, ofc.

and an exciting pic for us too

NZ could have at least made those Gems grassland for us

Okay who wants to start and make those moves?
Okay, our new glorious lands
Spoiler : 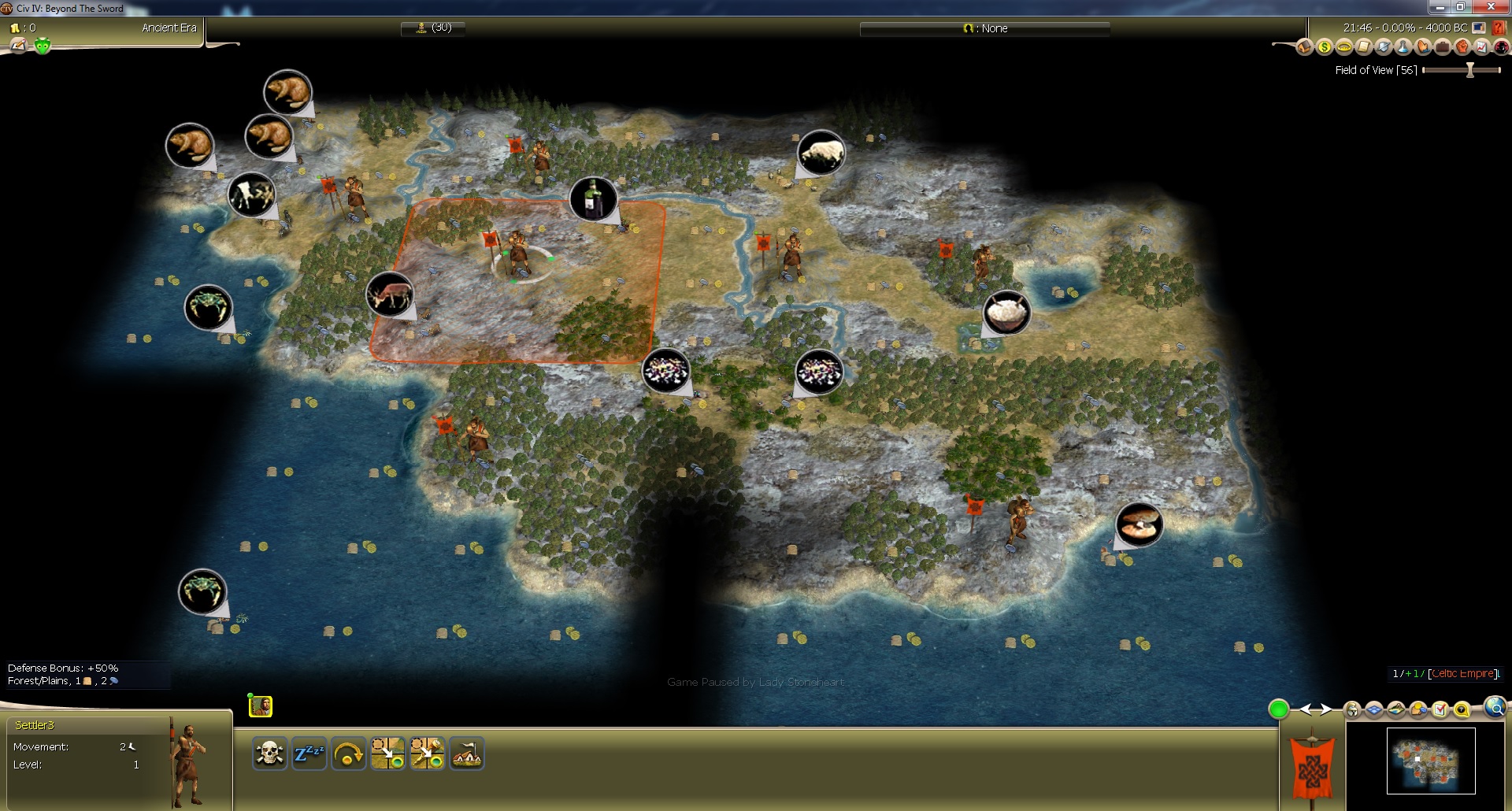 Rice wet favors our thoughts of picking gems city as cap.
We on new page Lymo.

Last edited: May 1, 2020
Beginner help guide for Civ IV
You must log in or register to reply here.