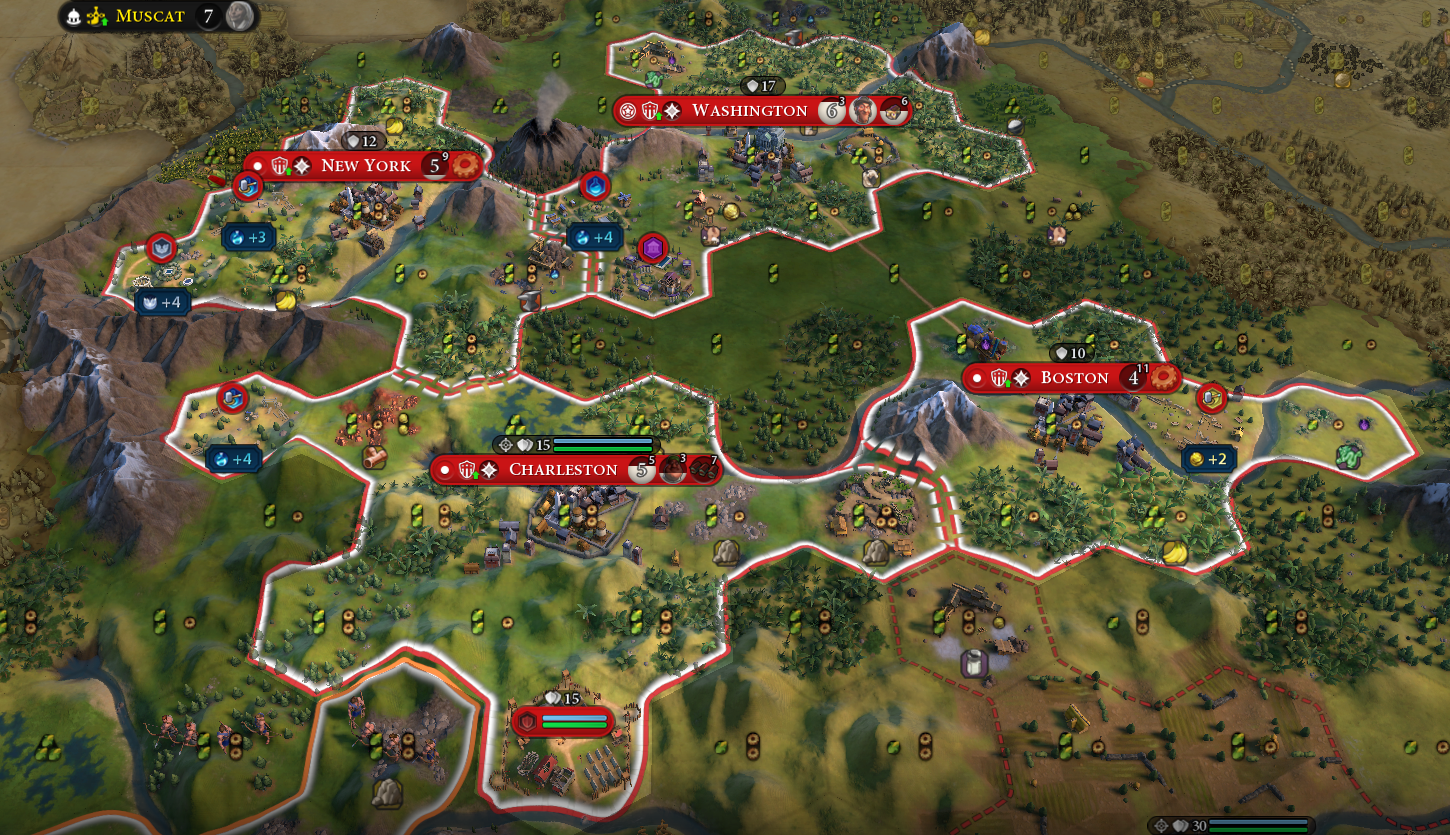 I'm currently at war with Korea and was able to pillage a lot of science off of them; completed all of bottom pre-medieval tech tree and almost done with apprenticeship. I'm also researching feudalism atm. Capital city has a campus and a government plaza, second city has encampment, third holy site (failed to get a religion, thought I could), fourth nothing. I want to start construction of second specialty districts to fixate the construction cost, but if I place them on good adjacency tiles I'll run out of good 4+ tiles to work, and if I place them on bad tiles adjacency's ruined (I did already put down a few but I want to know what I should've done).

Another problem is that I have too many things to do. I want to improve my tiles, build buildings for my first districts, build second districts, get more settlers to expand, build basic infrastructure buildings as my cities reach population limit.

What should I focus on? What could I have done better?

I got Magnus (groundbreaker, surplus logistics, provision) and Pingala (librarian) btw. Also have a level 2 warrior, a level 2 archer, and two level 3 archers.

From the looks of it, your cities have a surplus of decent tiles to work, so I don't think you lost anything by placing down your second specialty Districts. Losing a tile isn't going to hurt your cities that much, since they can just work a different one instead. If you have a good adjacency bonus on a District, you should almost always place it there, even if it crushes a good tile. You can always create a good tile yourself by placing down Improvements, but it's really difficult to create a good adjacency District - you'll need to spend a large amount of Production surrounding that District with other Districts, all of which likely won't have the greatest adjacency.

As for what you can do, I'd vote for focusing on getting Settlers. Once your capital finishes the Ancestral Hall, just start spamming Settlers out it, and probably chop out all that Rainforest to get several more. As long as there's half-decent land left to settle in, an extra city is always a good investment this early in the game.
While your capital is building Settlers, I think you should start building up the Campuses in Charleston and New York, since they have a very good adjacency bonus. I don't think the Commercial Hub in Boston is good enough to start building up immediately unless you have a very low Gold income, so you can use Boston to instead create Builders for the rest of your cities. Alternatively, you can go full throttle on Settlers and have every one of your cities build some, and delay infrastructure for later.

Calm as a Coma

You should rename your cities after different cultivars of potato. <-- that's not meant to be taken seriously.

Maybe convert that swamp in Charleston to population and buy / build a settler there (if you have the gold).
Have one builder mine the jade (Boston) and copper (Charleston) and plantation the bananas in Boston.

Looks like decent terrain over to the east of you. Go get it!
Relax

To the house of a friend the road is never long.

Outch.. too bad that SALT tile was picked up via border growth by the City-State south of Boston .. while Charleston lost a third STONE-Quarry opportunity to the Orange Major near the Encampment.
Hurry up and grab that IRON (with one Tech Yield) north of Washington which also has some precious growth idled by that RICE east.

All Turns below 100/125 should always optimally benefit from fast(est) development tricks, asap if possible.

Looks like you've got room for at least one, maybe two more cities to the east, and maybe another north. I'd get Washington on a settler (once ancestral hall is built) and Boston too - particularly once you mine the jade and get apprenticeship. For the others, Charleston looks like it's nicely set up for EC/Colosseum in the center of your empire - assuming you settle another city by the river to the east, you could have Colosseum hitting at minimum 5 cities, which is good. Moving Magnus there and chopping rainforest will get you to 7 pop for the district, and there is plenty of choppable greenery and stone to help with the building and wonder. Also, if you place the EC well, you can leave an empty space for a Theatre Square adjacent to EC, Colosseum, and Gov Plaza, which would give you a +6.
You must log in or register to reply here.