Stranger in a Strange Land - A Realism Invictus Story

Chapter 1​
He heard the sound of waves nearby. Soft, peaceful, and soothing. While he couldn't see his surroundings for now, it was clear that it was a bright, sunny day, and there was a cool, gentle breeze. It felt... nice. Almost like he could just lay here forever, feeling the breeze, hearing the waves crash softly onto the shore. Like he was on the beach, near his home. His home...

Ioannis jolted up in alarm. His home! His home wasn't here, he shouldn't be here! He lived in a house in the outlying districts of Constantinople, in the interior of the city, not here on the beach! And for that matter, he shouldn't be at home anyway; he should be on the walls, defending the city from the onslaught of the Turks! Why was he here on this beach?

Ioannis looked around. He was certainly on the beach, but the city, his home was nowhere to be found. How in the world was that possible? Constantinople was one of the largest cities on Earth; how could it be missing?

Panicked thoughts began to crowd in his mind, unanswered questions filling him with dread and confusion. What had happened to him? Where was Constantinople? Where was the City of the World's Desire, and the thousands of men who defended it when it needed them the most? And for that matter, where was the Turks' army, that tens, maybe hundreds of thousands strong army that threatened to bring down the last bastion of the Roman world? Where was everyone?

At first, Ioannis was overcome by panic and confusion. However, before long, his training as a soldier kicked in, and he began to calm down, if only so he could think about his predicament rationally. So much was unknown, but if he could just think about what had happened, perhaps he could piece together what had happened – and where he was now.

So Ioannis began to walk down the beach, sword and shield in hand, as he began to try to figure what had happened to him, and why he was... wherever he was now. It took him a while, but he was able to piece together some of what had happened. 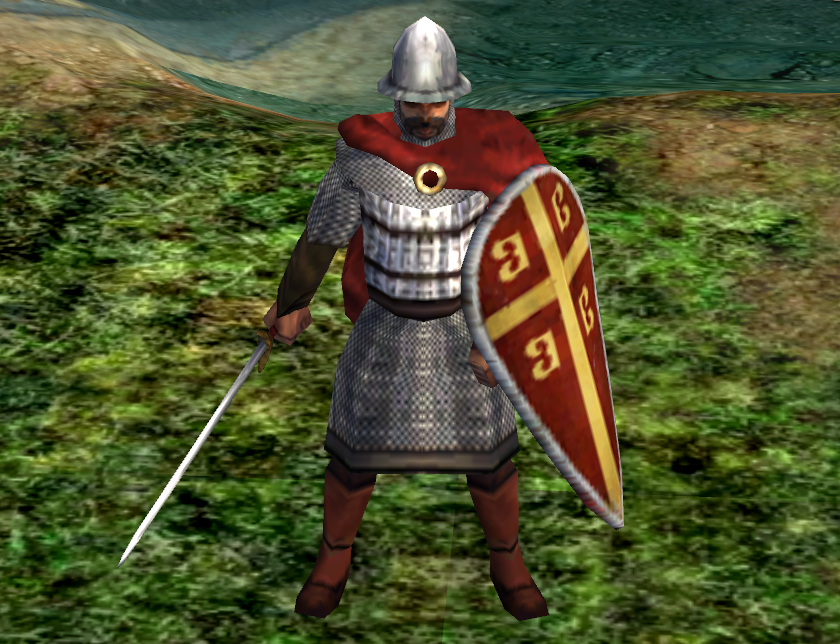 The great, near-impregnable walls of Constantinople were battered, having taken pounding after pounding by the great cannons in that heathen Mehmed's army. The Turks had then launched an all-out assault with seemingly everything they had. The first wave was beaten back by the City's defenders, but the second attack managed to get through the badly damaged walls briefly before being pushed back out by the defenders, led personally by the Basileus, Constantine XI himself. For a moment, it looked as though the City and its defenders would live to fight another day.

And then it all fell through. The Genoese, - “cowards!” Ioannis thought – fighting alongside the Romans, fled to the harbor once their commander was wounded in battle. Without their help, there weren't enough Romans to defend the entire length of the walls, and little by little, the walls fell to the Turks.

Constantine, in a last ditch effort, gathered every man he could – not many, given how many of his soldiers had already fallen, and how many were fleeing into the city to protect their own families – and prepared for a final counterattack, to push the Turks outside of the walls once again.

And that was what Ioannis remembered – a final charge, straight into the center of the enemy that had already breached their final defenses. A brief moment of insane, desperate battle, the sight of the Basileus, the last Basileus, falling just like the soldiers, both Roman and Turk, surrounding him. A horde of enemy soldiers charging his own position, and then...

Nothing. He could not remember what happened from there. It was as if God Himself had just plucked Ioannis away from his own death, and placed him... here. Wherever here was. Perhaps –

Did he die? He must have, there was no way he could have survived the ocean of Turkish soldiers coming at him, aiming to kill. So did that mean he was in Heaven? Had God taken notice of his bravery, his willingness to fight for Him even in hopeless circumstances, and brought him to Paradise as his reward? This place, wherever it was, seemed pleasant enough. Perhaps he was in Heaven, with the Lord after all.

He began to think that, perhaps this wasn't Heaven after all; perhaps he was actually still alive. He mused that this could possibly be Hell, but it seemed far too pleasant for that. He quickly drove the thought out of his mind.

Another thought – did God save him from certain doom, and place him here – wherever here was – directly? If so, why? Why would he be so special to be worth direct, divine intervention from the Lord Himself, instead of someone like Constantine, who Ioannis had seen be cut down right in front of him?

No answers seemed to be forthcoming. Ioannis could no more answer that question than answer the question of where he was at the moment. He looked around, taking in his surroundings. The sun was rising to his left, what he assumed to be the east. To his left was the shore, and the water beyond. Whether this was an ocean or just a large lake, he could not be sure, but he could not see land over the horizon. Grassland stretched inland, and Ioannis could make out a hill off to the southwest, covered with a loose covering of trees. He made the decision to begin a trek off in that direction, to climb to the top of that hill and get a better handle on his surroundings. Perhaps then, he could actually think about what to do next. Ioannis grabbed his shield from the sand, sheathed his sword, and began marching, hoping that answers would eventually come.

Hello and welcome to Stranger in a Strange Land, a narrative story set in the game Civilization IV. For those who don't know and remember (which is probably everyone at this point), a few years back, I attempted to write a narrative story about an immortal, amnesiac wanderer, who found himself in an unknown world with no idea how he got there – or how to get back home.

Unfortunately, around the time I started that story, my interest in Civilization IV had begun to wane, and I dropped the story after only 2-3 chapters. I plan to do different in this story, which has a similar premise, although a few things are different:

I hope you enjoy Chapter 1 of Stranger in a Strange Land!

It's about three years too late, but subbed.
"One is my dove, my perfect one is but one, she is the only one of her mother, the chosen of her that bore her. The daughters saw her, and declared her most blessed: the queens and concubines, and they praised her. Who is she that cometh forth as the morning rising, fair as the moon, bright as the sun, terrible as an army set in array?"
The Canticle of Canticles, 6:8-9
You must log in or register to reply here.

Phantom Piper in the Sky

I
[BTS] Realism Invictus - Need advice on my bad gameplay