The Test Of Time Patch Project

EnglishEdward said:
I just had a rather strange thing happening, playing ToT Fantasy world with an earlier version of the patch.

I (Merman) was wiping out the Goblins and discovered there was one more Goblin city on their F3 city list than I could see on the maps.

I did a search for it, and it centred me at the undeworld square where I had destroyed it (Twistn'Turn) earlier.

I could move a dragon into it, with no message raised, but it was still there.

In the end I founded a city where the search reported the Goblin city was, and
on exiting the city centre access map, it was visible as a size 8 city in Goblin blue.

I moved a dragon onto that square again and captured it.

I then got the message that the Goblin civilization had been wiped out.

I then had two cities on the global city list at the same location.

If you're destroying capitals in the Midgard version of the fantasy scenario then you're playing with fire as so many story events seem to connect to capitals so things start falling apart pretty quickly. However if you're just playing regular fantasy mode then that's interesting as I didn't think that was event heavy.

I think I have encountered your city not there but still there bug when I played @Kestrel18 's excellent Mars Now Expanded scenario for ToT a few years back. The Ukranians get the best start however it's a trap as Kestrel set up a giant meteor crash event in the late game that obliterated my capital and a nearby city. However while my capital was truly gone and had to be rebuilt I quickly noticed that my nearby city New Canberra was still 'sort of' there. If you look at the screenshot below you'll see there's no city graphic yet the city name "New Canberra" is still there. Should anyone wish to load the attached savegame with Kestrel's mod installed you'll also notice that you can't enter the city on the main map as double clicking it just loads the units, however if you hit F1 and go to the city list and click on it there you can still enter the city and find that it's alive & well lol! So I suppose if some weird event trigger city bug like what happened to me is happening to AI cities in your game (which is VERY possible in midgard) then it might create the strange events you describe! 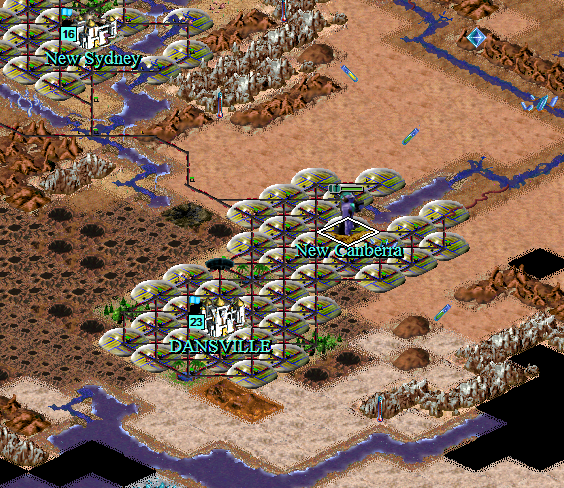 Thank you for your reply.

And yes, I got the name outline but without the city size type icon.

Maybe someone can help me with this. In the Civ Score, it shows -70 for Pollution. Where is that pollution? Or is it a bug?

Last edited: Wednesday at 10:24 AM
Colonization Image Viewer/Extractor
Colonization Hot-Seat Multiplayer
You must log in or register to reply here.

[TOT] The patches of TOTPP