Other mods enacted are:

UC's Iran can buy policies via faith, but I did not meet the issue mentioned before I played as North Yuan. Actually I was allowed to buy Chongzu via faith only in the cities following a religion. I did not have such issue in cities without any religion.

What were the beliefs of that religion? Did it have the one that allows you to spend Faith on pre-Industrial land units?
TopHatPaladin's Civilizations (Civ V)
Most Recent Releases: Aztec (Tlacaelel), Rome (Romulus), Guge​

I believe I did not select any belief related to purchase units. Also, Chungzo was the only unit has such issue and I counld not buy other units with faith

Is it not just gonna be that RequireeBeliefFaithPurchase or w/e is set to false?
Chrisy15's Civilisations (C15C) - From the Fertile Crescent to the Cold War, and beyond! NEW: Prora and Kremlin, reworked! Qajar Update
Chrisy15's Civilisations (C16C) - Also the home of Civitas on CFC I guess... Sumer Rework updated for GS.
Other Stuff - Top Panel Extension (v4) V Modding Helpline Colonial City Names JFDDLC! Civ Modders Monthly Guides 1000 posts! 2000 posts!

Chrisy15 said:
Is it not just gonna be that RequireeBeliefFaithPurchase or w/e is set to false?
Click to expand...

Just started a game with The Chamorro and like the design and abilities. Also since they're Oceanic culture which is bit unexplored still. Just a few minor things I noticed for a future update:
- The WLTKD you get from the UA and UU ÅCHO' ATUPAT are both 20 turns which feels a bit long especially as they will appear regularly. Might be better to bring it back to 10-12, which I believe is also the standard length for a WLTKD?
- The UU Sakman didn't get extra movement vs the trireme (only had 3 movement). Also as I was playing with JFDLC it wasn't the first naval unit as description mentions (which is the galley)
- The UU Sakman healed 10 when starting the turn on a tile next to a sea resource in neutral territory. Believe it should work when only on the tile with the sea resource? Perhaps there was a hidden one (oil?), but not sure if those could be disregarded for the purpose of the UU Sakman ability?
- Some formatting of the decisions with a few blank lines in the requirements sections.

Thanks for the feedback! I'll look into these issues.

(The default WLTKD is 20 turns, according to the wiki, but you're not the first person to mention that it feels long— I'll do some longer-term playtesting with the Chamorro and see how it feels in action.)
TopHatPaladin's Civilizations (Civ V)
Most Recent Releases: Aztec (Tlacaelel), Rome (Romulus), Guge​
B

First I tried the Aleut, but the Barabara wasn't working and then I tried the Anangu, but the Warmala only spawned a settler about 50% of the time.

Then I learned the workshop -still- doesn't have the latest versions so I downloaded them from here and wanted to check if it is working now.

To get a coastal start, I started many different games with the Aleut, but learned that never happens anymore in the newest version, it's got an avoid coast bias now.
Imo that's like giving Brazil an avoid jungle bias or Morocco avoid desert, etc. it downgrades the special ability and makes them a lot less fun to play.

Spoiler Aleut v6 Changelog :
* Added a popup notification to show when embarked units generate food for the nearest city
* Corrected the camp count to only include worked camps
* Fixed a bug where number of camps was not reset when checking a new city
* Fixed text error causing the civilopedia entries for the Aleut and Agugux not to load
* Updated Decision formatting

I decided to continue allowing lake tiles to count toward the Barabara's production bonus, so that part will continue to function as before.

The Anangu fixes look like they're going to be a bit more complicated to resolve, but I'll post an update when I get everything wrangled.

(Also, since you mention the Steam version, I should add: I only have sporadic access to the Steam Workshop, so for now, this update is only live here on CFC. Steam will have the updated version eventually, but for convenience I'd suggest downloading the CFC version.)
Click to expand...

Small glitch I noticed in Aleut v6, not sure if intended: the Iqyax has 1 movement less than the trireme (2 vs 3). Didn't see anywhere that this was part of design. Am using JFDLC v55 (public version).

Thanks for the heads-up! That's not as intended, I'll look into it.
TopHatPaladin's Civilizations (Civ V)
Most Recent Releases: Aztec (Tlacaelel), Rome (Romulus), Guge​

Playing with the Ket, I got a CTD when a Fish-Oil Bowman killed a Barbarian Warrior in its Encampment (earlier attacks no problem). Mods used: JFDLC v55, HR v45

It's been a while, but I'm back! Usman dan Fodio leads the Sokoto Caliphate! 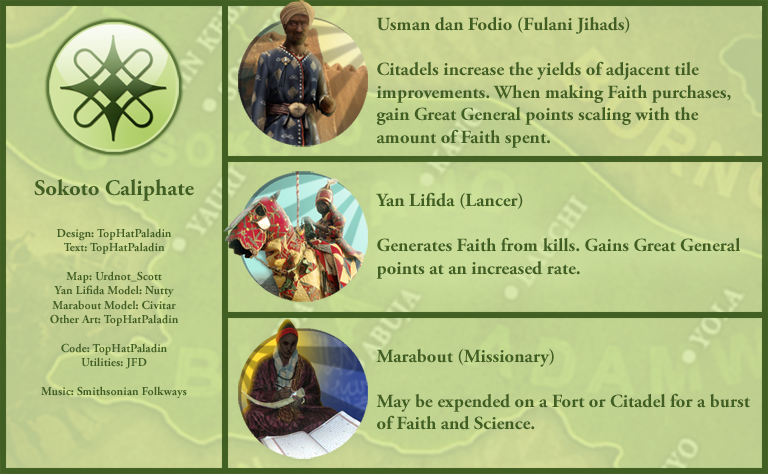 This release is also part of the 12 Days of Africa event, where a group of Civ V modders is releasing an African civ for each of 12 days! Check out the other mods released thus far as part of the event:

Thanks for the release of Sokoto! Took it for a quick spin and noticed a few things:
- UA: yield increase of adjacent tile improvements seem to work for production (e.g. +1 for each mine), but food seems to be getting too much: have just 1 sheep pasture but get an extra +5 food. Not sure why but perhaps the logic is taking every food improvement in city radius?
- The Marabout doesn't show in the 'spend' screen so no way to acquire it. The inquisitor is showing though.

Thanks for the report! I'll take a look at the Lua and see what could be going on re: the tile improvements. On a first pass, things looked okay, so it may have something to do with the way my code intersects with JFDLC.

For the Marabout issue— does the vanilla Missionary show in the menu, or is there nothing at all? Civ tends to be finicky about replacing religious units, so I've included some code that automatically replaces newly purchased missionaries with the Marabout.
TopHatPaladin's Civilizations (Civ V)
Most Recent Releases: Aztec (Tlacaelel), Rome (Romulus), Guge​

TopHatPaladin said:
Thanks for the report! I'll take a look at the Lua and see what could be going on re: the tile improvements. On a first pass, things looked okay, so it may have something to do with the way my code intersects with JFDLC.

For the Marabout issue— does the vanilla Missionary show in the menu, or is there nothing at all? Civ tends to be finicky about replacing religious units, so I've included some code that automatically replaces newly purchased missionaries with the Marabout.
Click to expand...

No, the vanilla missionary is also not showing; only inquisitor appeared when I enhanced my religion. I saw the Marabout in Civpedia under regular units (so not under religious) which might be related... in other mods replacing the missionary I believe I did see the unique unit mentioned under religious.

Arbiter of the Sword

Pretty cool to have an event, and also pretty cool to choose Africa as to theme. Very little understood and unappreciated continent with so many interesting peoples, cultures etc. Thanks for being a part of this.
Majesty, an epic mod based on Avain's classic Quot Capita:http://forums.civfanatics.com/showthread.php?t=498840B]

Stef09 said:
No, the vanilla missionary is also not showing; only inquisitor appeared when I enhanced my religion.
Click to expand...

The 12 Days of Africa continue with Ghana under Kwame Nkrumah! 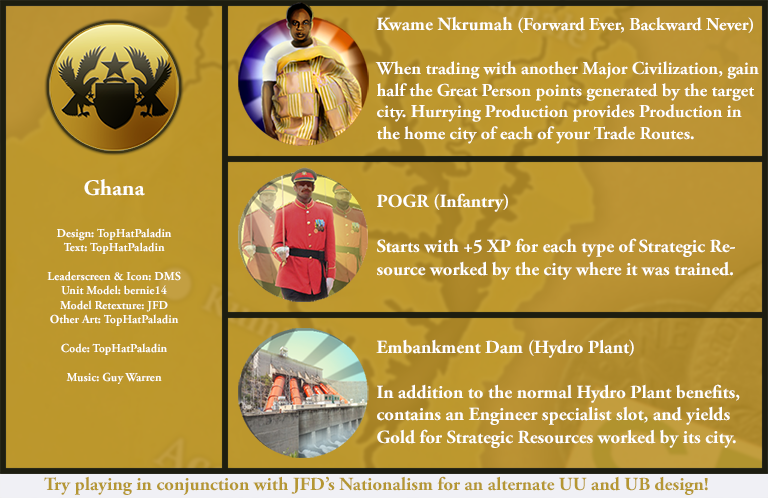 If you're playing with JFD's Nationalism enabled, the design changes as follows (under spoiler): 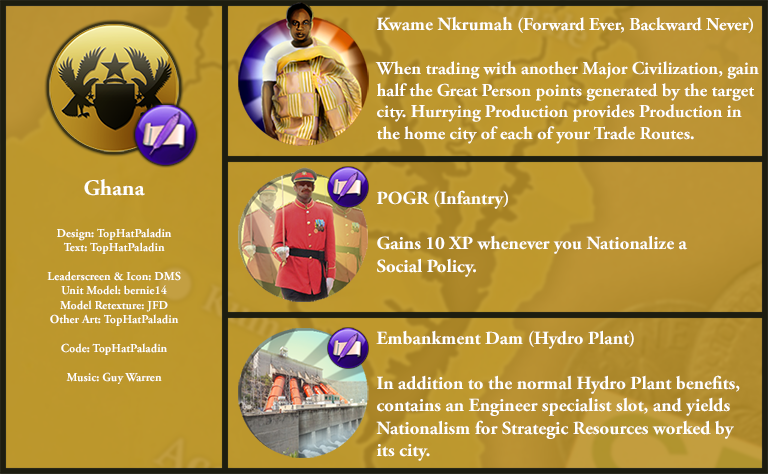 Just played a game with the Ghaznavids but there a few things not working in the game:

UB Saraparda:
- No button or anything to rebase garrisoned GG; how should this work?

As always, thanks for the report (and thanks for always including logs, it's definitely a big help to have!)

The intended function of the Saraparda is that a button should appear on the side of the screen, alongside other unit buttons such as Move/Fortify/etc; this button, when pressed, relocates a unit to the next city with a Saraparda. It's been some time since I cobbled together that code, though; time permitting, I think I'd like to go as far as to rewrite that whole section, and create a submenu allowing you to freely choose the destination city.

I'll take a look into the other reported errors as well; I don't currently have much to say about them, but hopefully they'll turn out to be easy fixes :b

Edit: Just noticed there was an error in the IsCivilizationActive function, without which none of the other Lua would load; I've uploaded a fix to that problem now, and with any luck that'll resolve all of the other bugs. I still do want to rewrite the Saraparda stuff though :b
Last edited: Sep 6, 2019
TopHatPaladin's Civilizations (Civ V)
Most Recent Releases: Aztec (Tlacaelel), Rome (Romulus), Guge​
You must log in or register to reply here.

What is the real limit of expanding solar+wind power?