Welcome to the TSG_213 Opening Actions thread.​
STOP - Please do not continue reading this thread until you have completed at least 80 to 100 turns in your game.

This thread is used to discuss the game once you've started playing through your first 100 turns. Apart from normal decency, the only posting restrictions are to please not post videos until the deadline is finished and to use the spoiler tags for screenshots. Here you can post questions related to the game and share your achievements/anger/frustration/victories while you play (but please remember --- it is a family-friendly site, so express anger or frustration with this in mind.

Please use this thread to discuss your goals for the game and your opening moves through the first 100 turns. Anything after that should be posted in the After Action thread once you have completed your game.

Here are some talking-point suggestions:
- What did you think about before starting the game?
- Where did you settle (and why)?
- Anything specific about your build / tech / so-pol order?
- How did the terrain and map settings affect your early decisions?
- What were your initial priorities?
- What Wonders did you try to get and did you get them?
- What surprises did you encounter?
si guerre soit, et a faire le bien q'il poet
(... if there is war, do the best you can)
Henry, Earl of Derby's orders at Battle of Auberoche, 1345
R

Well…I was too greedy and it cost me.

Settled the SE sugar. Worked growth, which meant a longer scout and monument. This meant t42 for my settler in Liberty, which is slow obv. And, I decided to be greedy with the shrine and granary before GL. 2 turns short on GL as it turns out. And…with all those hammers wasted, pushed back my third city. Decided to focus on growth and stockpile cash for upgrades.

Ended up with t108 Chiv. Wanted 90-95. Oh well…8 camels and 2 horse headed in separate directions with 2 more camels in 2 turns and more horses in Carthage to add. Dido has been riding the Struggle Bus the whole game. She’s on 1 city and I’ve retrieved 3 of her settlers from barbs.

Wow, T108 Chivalry; I'm on T100 and nowhere close to Chivalry. I did get Petra though! But that's about the only bright spot in my game so far.

Before starting I had dreams of DF and Petra in the midst of all those lovely desert hills. But its been a pretty disastrous first 100 turns. First of all, I settled in the wrong place - on the hill to the NE of the starting location. Should have settled on the FP one tile to the West, that would have spaced out my cities access to luxes better. I took the hill because I hadn't seen the two Sugar to the NW yet.

Then on T14 Persia took DF - Aaarrrrggghhh! Oh well, Darius will be the first to die I thought. However, things are going much slower than I had hoped and I'm nowhere near Camels and don't have any kind of army to threaten him, although I did manage to steal a worker. With DF gone, I took Fertility Rights to grow a massive Petra city. And I decided to go Piety so I could get the pantheon of the second most popular religion - after I take out Darius I'll spread his religion to me just enough for it to be second. However, Piety is really weak and its slowing me down a lot. It seems the bonus Reformations are actually not very good, especially on lower levels, I took Jesuit Education but am probably not going to get to use it very much.

My Social Policies went back and forth. I opened Tradition as usual, then went Piety. Then when I had about 10 turns until I could start building Petra I took Aristocracy for the 15% wonder bonus. And still Nebby is beating me to wonders.

T60ish. Got my 3rd city late, and its not in the best location but I needed a coastal city.
T84. Took me until 266/200 faith needed to spawn a GPr; took Tithe and +1 food from Shrines and Temples to boost FR.
T85. Got the Reformation, Jesuit Ed.; darn, I thought there was one I could buy camels with faith. 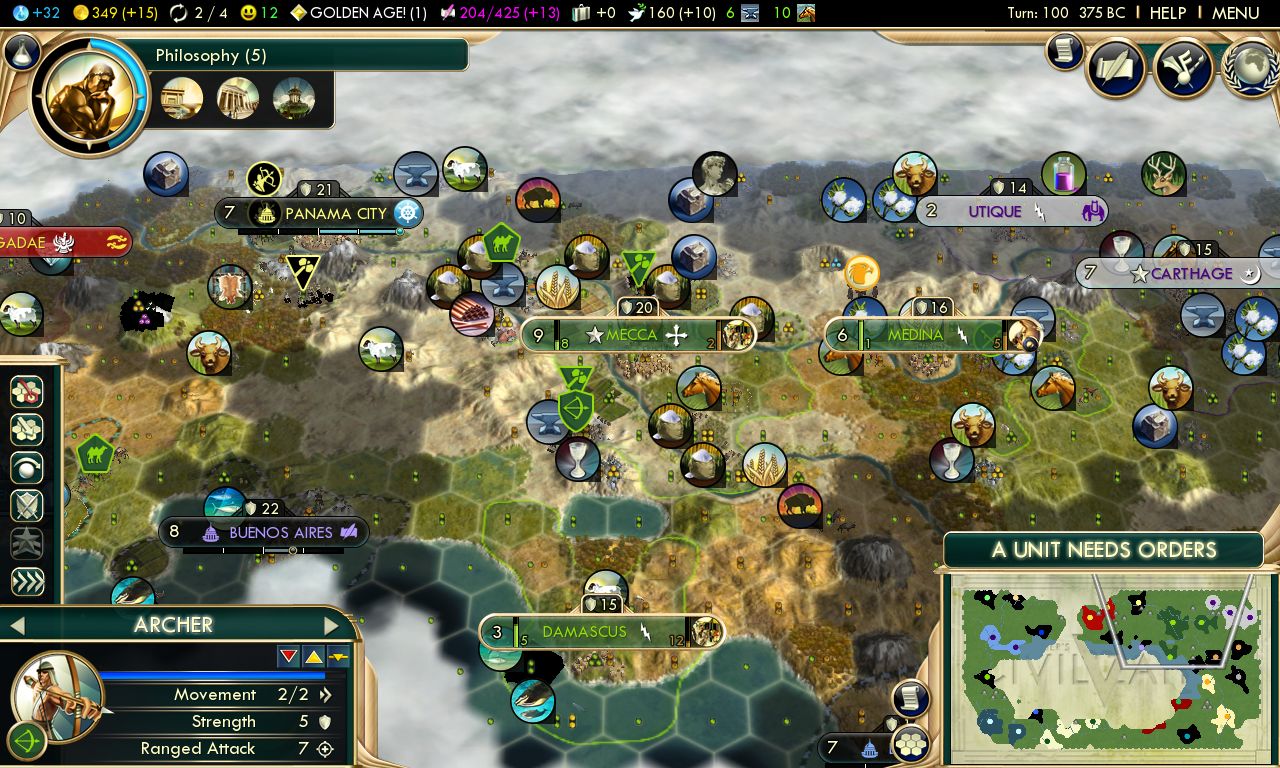 My first 100 turns went much better than my practice game! Playing that practice game really helped, as I now knew what to focus on.

I didn't go for any wonders (except for a very late Oracle, see below), and made sure my capital had decent production. So I moved the settler from the starting location, and settled two to the south-east.

So my capital was next to a silver tile, lots of hills, and in the second ring we had some convenient wheat, sheep, and bison.

My scouts were quite lucky: The one exploring the north coast got 8 faith from La Venta, so when I finished the shrine it took only 2 turns to Desert Folklore Pantheon.
Founded Islam turn 55, with Initiation rites (100g/converted city) and Pagodas. Later added Itinerant Preachers and happiness from shrines.

Funny coincidence: The scout exploring the southern coast eventually stumbled upon a barb camp with some Moroccan units next to it. The next turn, the barb camp was empty, and 3 Moroccan units were just standing around it, scratching their heads. My scout was two tiles away from the barb camp. First step towards it, it encountered a religious CS with a quest to destroy just that barb camp. So with its second movement point it stepped into the empty camp, and got the gold and the influence for free

Policy-wise, I took liberty. Went left side first, and with the free settler I founded my first and only expo NNW of the capital, on a hill next to some copper and near another wheat.

I might have built more expos, but Dido forward settled me and put a city right next to mine. DOWed her and took that city with 5 chariot archers. Then went on to her capital, which fell in turn 98.

I dind't make peace with Dido so she didn't get any ideas of putting any more of her crappy cities next to me.

Turn 101 - finished Oracle, my only wonder. Two city states wanted it. Finished liberty with the free policy, and took a Great Scientist to eventually bulb Chivalry.
Turn 112 - Chivalry
Turn 124 - Conquered Assur with my glorious Camel Archer army.
Last edited: Aug 20, 2022
You must log in or register to reply here.