For as poor as this map seemed to be, I think this would have been a lot more playable at Emperor, maybe even King. Whaddayathink?
si guerre soit, et a faire le bien q'il poet
(... if there is war, do the best you can)
Henry, Earl of Derby's orders at Battle of Auberoche, 1345
V

I won on turn 201. Sloppy endgame with the Aztecs attacking me and plundering trade routes to the culture leaders, and I made a bunch of other mistakes that probably cost me 5-10 turns.

I reached Education on turn 110, built Hagia Sophia and Borobudur and started spreading my religion, which had Tithe, +15% production, +2 faith from wonders and Itinerant Preachers. Eventually I converted two quadrants to my religion, Home and Morocco-Japan. Tithe yielded something like 80 gpt in the late game.

The Aztecs had top culture at the time, so it seemed natural to go capture their Petra capital. Went for Physics & Machinery after Education and captured Tenochtitlan with Pikes, XBs and a couple of Trebuchets. I should've probably taken more capitals to win faster, but at that point it would've felt more like a Domination victory, plus it's a bit tedious. So I played peacefully after taking the Aztec capital.

Founded Congress on turn 141, proposed Culture Heritage Sites for the extra culture and Hotel tourism later. The plan was to propose IG on the second congress, so I went for Radio next. In the end I won before finishing IG, so perhaps the better play was to just propose World Religion on the first congress. 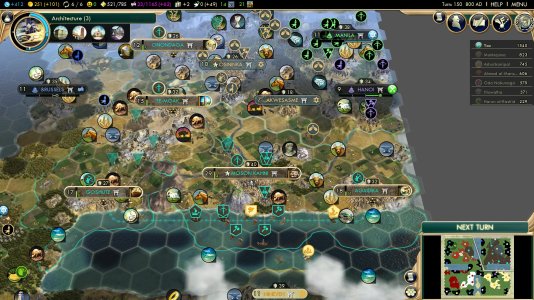 I adopted Autocracy for Futurism and happiness from national wonders. Unfortunately my capital spawned a Great Artist one turn before I got Futurism. I trusted the game's Great Person menu, but it gave me the wrong info because it doesn't account for decimal parts of your GA points, so I lost 250 tourism there. Didn't take any other tenets in Autocracy and just focused on Rationalism and Aesthetics instead.

Refrigeration after Radio, focused on building Archaeologists and Museums and purchased a few Hotels. Figured I didn't have enough science to get Internet before victory, so I went for Radar next, purchased a couple of Airports, gifted a city to Morocco and Musician-bombed them. Just one Musician was enough, and I didn't have the faith for the second one yet anyway, so I bought a Writer for the Futurism bonus instead.

I probably shouldn't have spent 1000 faith on an engineer to rush Eiffel Tower. That would've allowed me to do 2 concert tours, one for Morocco and one for the Aztecs. World Religion plus not losing a missionary to barbs would've given me the modifier for shared religion with several civs earlier too. And I should've kept bribing Montezuma to attack others so that he'd leave me alone. 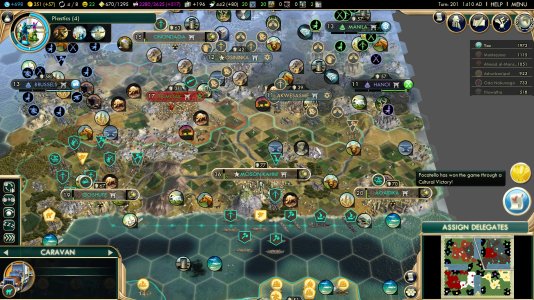 I played a lazy 3-city approach that ended with a turn 265 culture victory.

Build order was Pathfinder x2, granary, caravan, settler, (bought a settler). I eventually built Stonehenge, Oracle, Hagia Sophia and Borodubur, and with cheap missionaries I converted a lot of the map before Hiawatha started converting our quadrant to his religion. I was able to pass world religion pretty easily this way since Japan and Morocco had adopted my religion. On the second round, I lost out on the International games to the Aztecs by a lot.

Assyria attacked once, but had terrible positions to attack form and just threw units away.

In retrospect, I never grew the population required to get enough science for a quicker win. I eventually bulbed my way to telecommunications, then got that tech with the free tech from finishing Rationalism, then Oxford for the Internet.

In the end, I rammed through 4 great musician tours - first by founding and gifting Goshute to Morocco (Tour x2 by faith purchases), then I captured it and gave it to Japan (+1 tour from natural GM) and then DoW'ed Hiawatha with the final GM from Broadway.

Like I said in the Opening Action thread, I put my capital and two coastal cities in the same place as everyone else, and a fourth city to the south, on the coast next to Cerro de Potosi.

Chose Freedom as an ideology and got the Foreign Legion trait (with 6 free units) to take out the Iroquois, but before I was ready to start the attack the Assyrians DOWed me. I had a great defensive position in and around my southern city, and just chewed up their units. I think I lost just one Gatling Gun in that war.

I resurrected the Chinese by liberating Shanghai, and then Assyria sued for peace. I took 3 luxes and lots of gold from them, but left them their coastal city as it made for a lucrative sea trade route.

Then I attacked and took out the Iroquois. Took two of their cities, and razed the other two. Their last city was in the center of the map and it got conquered by none other than Budapest (who were allies with the Aztec, whom I had paid to DOW Iroquois as well). So I didn't get the diplomatic penalty of exterminating a rival Civ.

The rest of the game was peaceful. I built hotels and airports everwhere and then teched to Satellites before going internet. I thought the two GS's from Hubble would make up for the delay, but in the end I somehow had one GS leftover.

Got Internet with the Rationalism finisher. Faith bought a GM, sent him to Aztec lands and became influential. Two turns later I was influential over Japan as well and won the game.

Not having a religion did slow me down in this one. Also skipping Satellites/Hubble might have shaved off a few turns.

I've been away, just learning that there is (or has been) a problem. I'm checking on it, and I will ultimately be extending the end-date to make sure we get everybody's game in. So, for now, just check back here from time to time.
si guerre soit, et a faire le bien q'il poet
(... if there is war, do the best you can)
Henry, Earl of Derby's orders at Battle of Auberoche, 1345
V

I've uploaded my game, but it says "Culture Wrong VC" in the game status.
U

Lost to a Japanese cultural victory 1971AD :-( Was playing for domination, and controlled half the board, looking good for an eventual win, but couldn't stop them. Tried to submit game today but server tells me submissions for game 214 have closed.

vadalaz said:
I've uploaded my game, but it says "Culture Wrong VC" in the game status.
Click to expand...

With the server being up/down, and with my limited time here recently (and for at least through December), I have not had a chance to check this out. But it is on my radar...
si guerre soit, et a faire le bien q'il poet
(... if there is war, do the best you can)
Henry, Earl of Derby's orders at Battle of Auberoche, 1345

vadalaz said:
I've uploaded my game, but it says "Culture Wrong VC" in the game status.
Click to expand...

I believe the most recent fixes to the server has this corrected.
si guerre soit, et a faire le bien q'il poet
(... if there is war, do the best you can)
Henry, Earl of Derby's orders at Battle of Auberoche, 1345
You must log in or register to reply here.