My bad, should have had this here right away.
si guerre soit, et a faire le bien q'il poet
(... if there is war, do the best you can)
Henry, Earl of Derby's orders at Battle of Auberoche, 1345
V

I've played to turn 160. Japan has beaten me to Colossus and Notre Dame, both by one turn if I remember correctly. I also lost a missionary to barbs, then Oda cleared the camp one turn before I could do it myself. We may have a DOF, but my hatred for the guy is profound.

Other than that, the game's been going well. Here are the first 100 turns:

My first CB killed an Iroquois scout, and I also stole two workers from Hiawatha. I saw that Onondaga was 10 tiles away from Moson Kahni, so I built a quick caravan and sent it to Hiawatha on turn 25. I felt the science boost was necessary here due to having to research Trapping and Sailing early. I wanted to attack Hiawatha around turn 55 as soon as the trade route ended, but I didn't make it to Construction that fast. I ended up attacking on turn 65.

Wasn't sure what pantheon to pick here. Camp food would've been good eventually, but I prefer pantheons that are immediately useful, so I simply took God-King.

I purchased a Pathfinder early and managed to demand a worker from Hanoi, then steal a few more from them. I also demanded gold from Manila and Brussels, plundered a Japanese caravan and sold Truffles to Oda in the peace deal. This allowed me to buy a settler and have my 4 cities planted by turn 50: 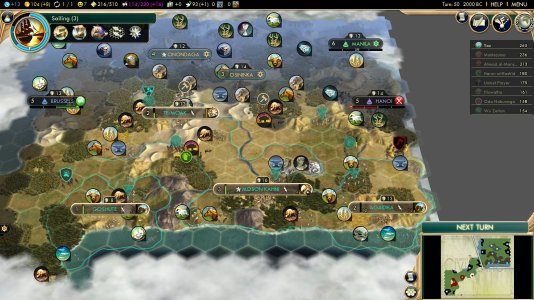 I wanted Petra in Te-Moak, so I went for early Currency. This was a mistake - Montezuma comfortably beat me to Petra by ~10 turns. I didn't know he had a desert capital, as my Pathfinder went elsewhere and I didn't have an embassy in Tenochtitlan early enough.

Onondaga was easy to capture, Hiawatha didn't have any of his UUs yet. I took the city and connected Silver with a citadel. My units needed something else to do now, so I bribed Monty to attack Melbourne, then sent my army to liberate it. This made Monty a perfect target for chain-denouncements and erased my warmonger penalty. I've had DOFs with Morocco, Japan, Arabia and Assyria since then.

In the meantime I built infrastructure, grabbed Hanging Gardens and Oracle, and finally finished NC on turn 101. 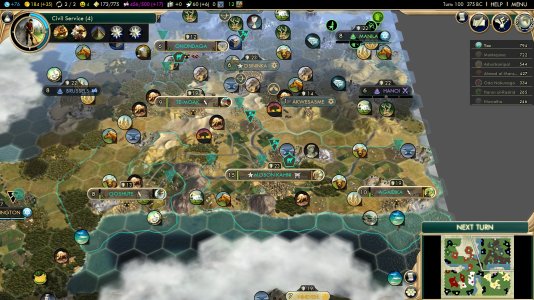 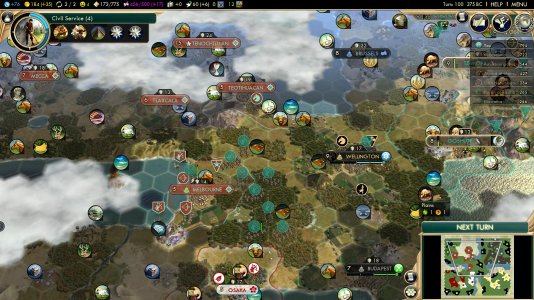 I've played over 200 turns already, so I don't remember all that much from the first 100 turns. I got NC at turn 80-something, and Oracle rather late, I think around turn 120.

One thing I noticed was that I settled 3 of my cities in the exact same locations as Vadalaz (the capital and the two coastal ones). My 4th city I placed next to the gold Natural Wonder further down the coast, to be able to have an Observatory there later.

As a pantheon I chose Fertility Rites to make up for the low food capital. I didn't manage to found a religion, even though I built shrines in all my cities.

In the early game I was friends with everyone, except China who I stole a worker from. Iroquois are the culture runaway, so I'll probably have to take them out.

I'm on turn 200 something too. My game is not going nearly as well though. Its pretty abysmal actually lol. Started out fine; I moved the Pathfinder and saw coast, moved the settler to the hill next to mountain. Then moved the pathfinder more but didn't see any sea resources so settled on the hill.

Ruins were Pop, Culture, CB upgrade. Then I got beat to all the rest.

T22 I had my first settler and settled Te-Moak to the west on the coast on the other side of the mountain range.
T40. Pantheon. Took God King because there were no obvious specialty ones that were useful.

I stole a worker from Hiawatha and stayed at war to try to take him out. That didn't go well. I am so bad at combat it would be funny if it weren't so sad. Here's a screenshot from T80 where I couldn't even take a strength 15 city with 5CB. I would have had it if the Mohawk Wars wouldn't have showed up. I did try to continue to attack but lost the eastern CB and the Pathfinder was way down in the red. So I had to back off. 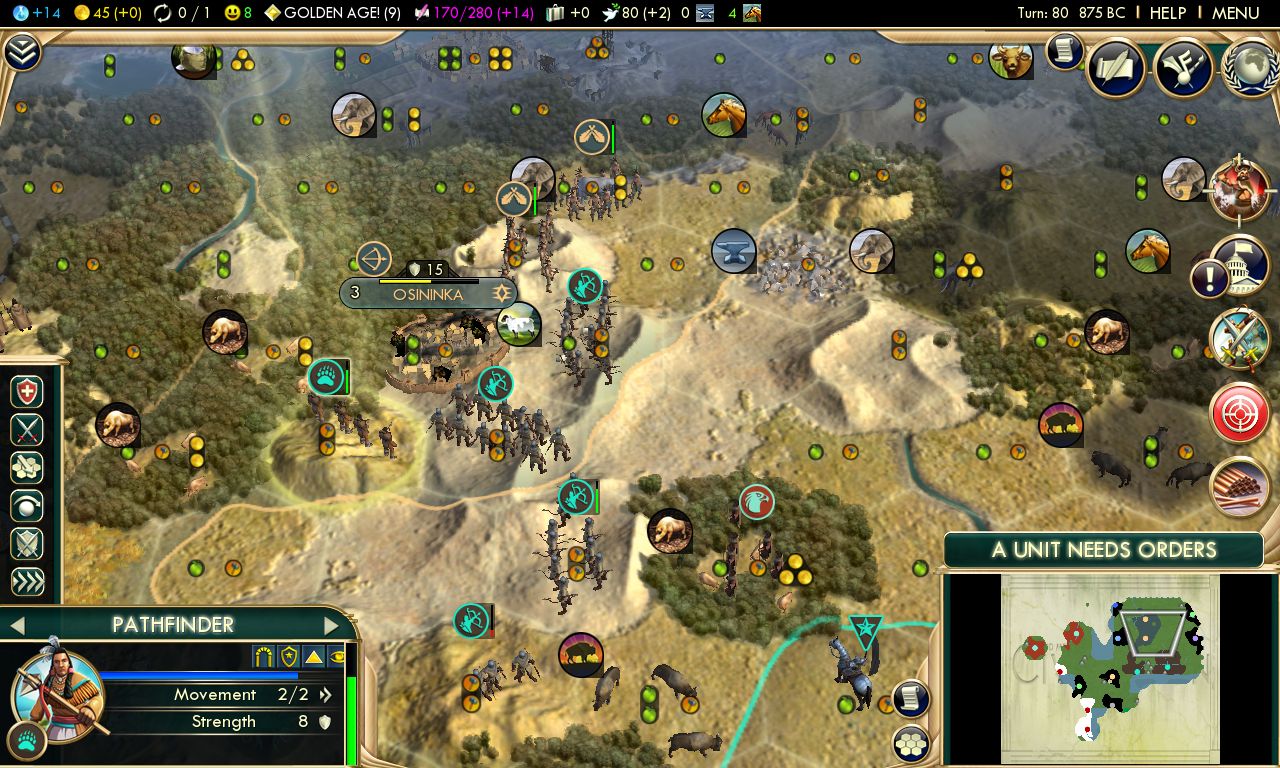 That war put me so far behind in everything else that victory is hopeless I believe. Only hope is if I can kill off the two cultural leaders; Monte and Oda. Oda will be easy to kill and he's got a lot of wonders. But Monte I don't think is possible because he has a heck of a lot of cities.

Speaking of getting beat to wonders. I got beat to an important cultural wonder by 1 turn also. I swear they cheat, like in Civ 2 the player could cheat and rush build a wonder after getting warned an AI was about to build it. In Civ 5 I'll bet the AI gets the warning now. I even did an experiment about a month ago when I got beat by a turn. I went back and changed some things so I would build the wonder a couple turns earlier - and the AI still beat me to it by 1 turn!

Here's a screenshot of my core cities from later in the game just to show where I ultimately settled (very late mind you). I also settled them in the same locations as you all.

I had possibly the best possible start on this game... and I fear I'm still struggling. I found a group of ruins just west of the start point, and got my first CB, and my second pathfinder quickly found another. Looking at the sparsity of my lands, I figured why not gamble everything and see if two CB and two Pathfinders were enough units to attack with. As I was gathering up there, first he sent most of his troops SW to I think deal with a barbarian village, and then he sent out a settler/warrior pair who I defeated. For some reason he decided that the best thing to produce while being besieged was more settlers (I have no idea how he built/paid for them so quickly) and taking the city turned out to be pretty straightforward. I had the quadrant to myself and you'd think that would make things a doddle.

In the rest of the world, the Aztecs feel well on top, having taken out their neighbour too, while also beating me to some useful wonders. To thrive in this game I suspect you need to be doing the micromanagement I can never be bothered with. I could maybe go on and win this game, but I don't think it would be a cultural victory if I do.
You must log in or register to reply here.