Warlords and Autocrats (World I)

Forum Freeplay​
This is a bit of an experiment: a play-by-forum game with a few major changes.

You can always play as any faction that's at peace with everyone. However, if you read a factions' most recent spoilers, you cannot play as their enemies. For example:
This is entirely too difficult to enforce, so don't be too strict about it - just respect other people's spoilers if you intend to fight that faction, and feel free to remind people about spoilers if you're sharing sensitive game info on the forums. Easy way:

Spoiler Secrets - don't read if playing an enemy! :
I'm building a nuke but don't tell the disgusting germans. LOL
There's also no rule against keeping proper secrets, and not posting details at all.

Recommended, but won't invalidate your saves:
You can submit a 0 turn save, and it will count as if 1 turn has passed for all the above.

Why use a custom scenario? Because I want to, that's why every change has been made to enhance the experience for this particular style of gameplay. 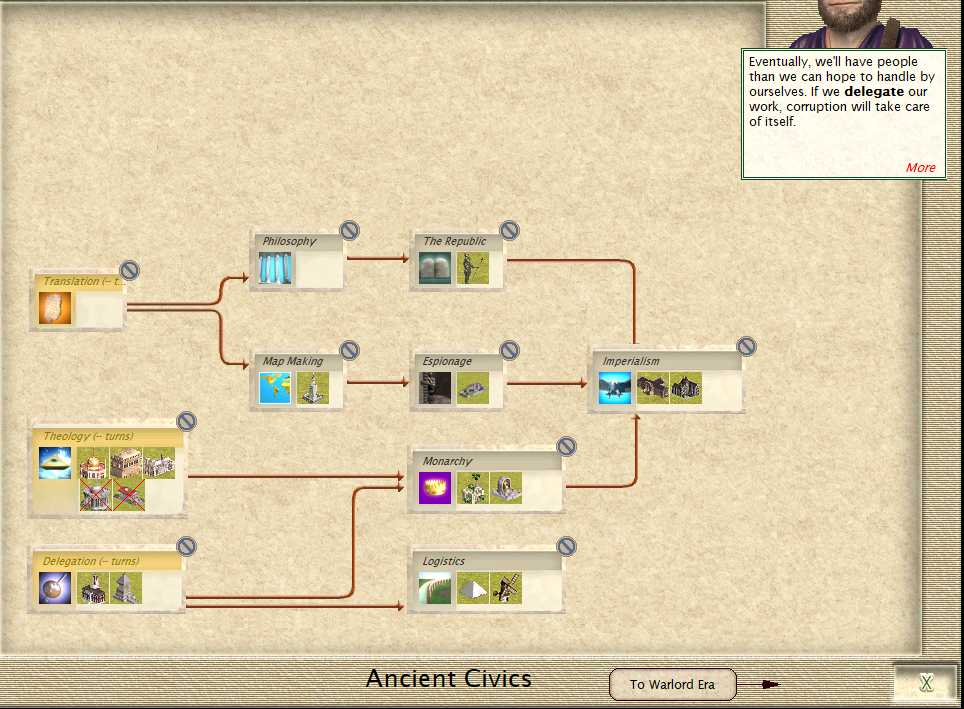 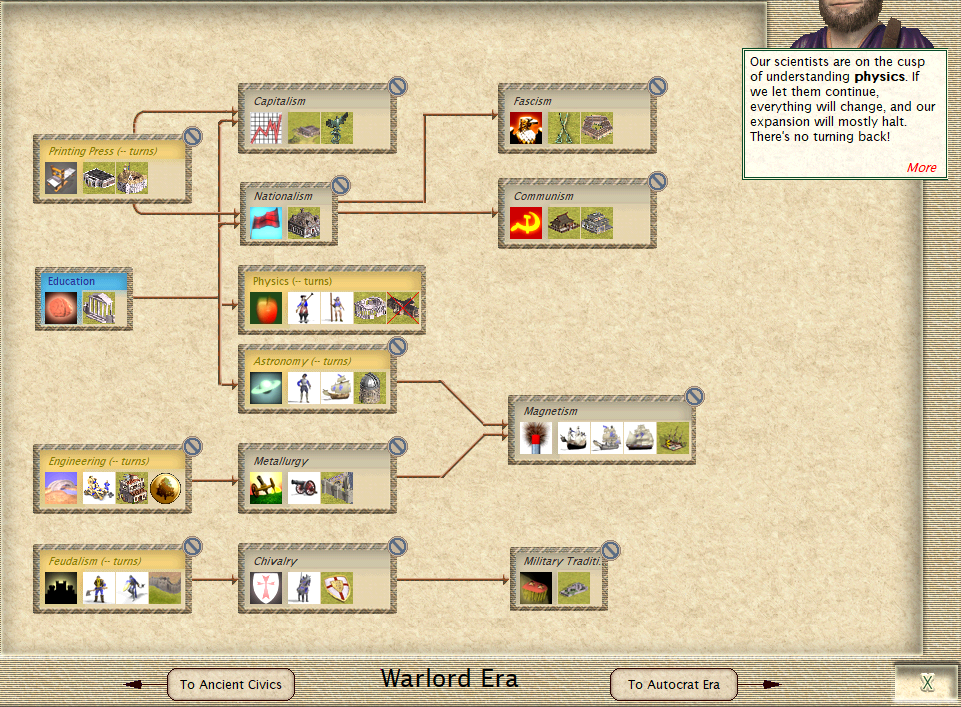 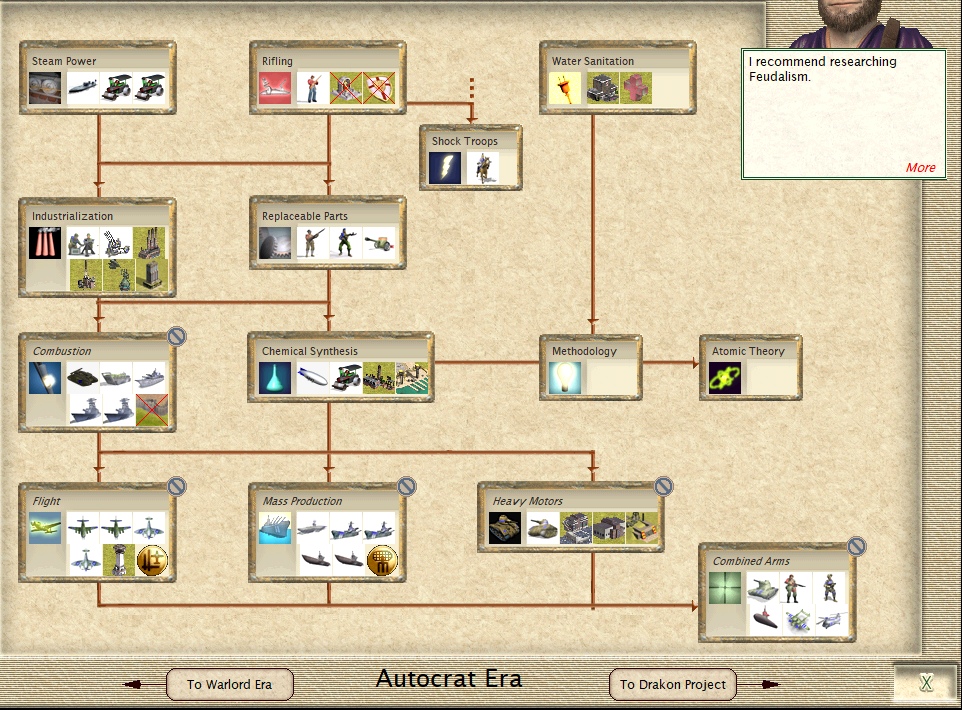 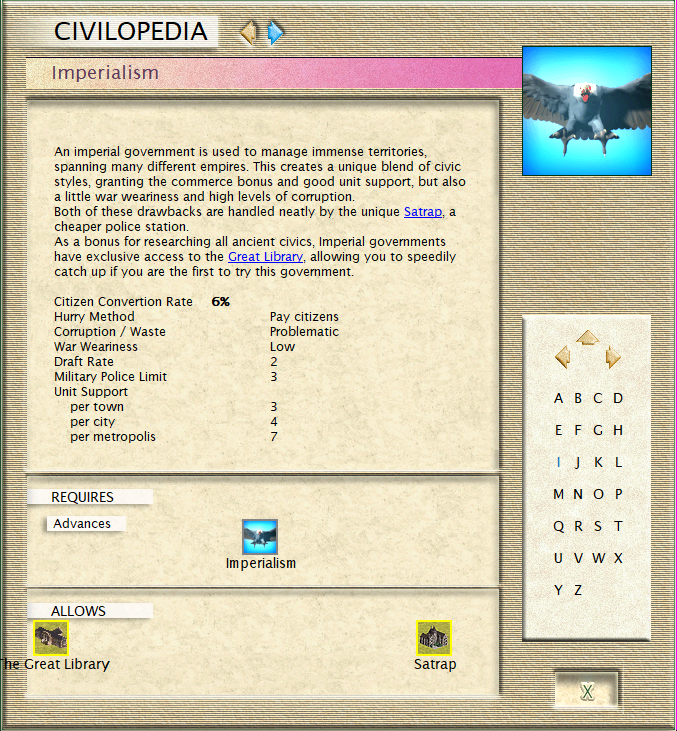 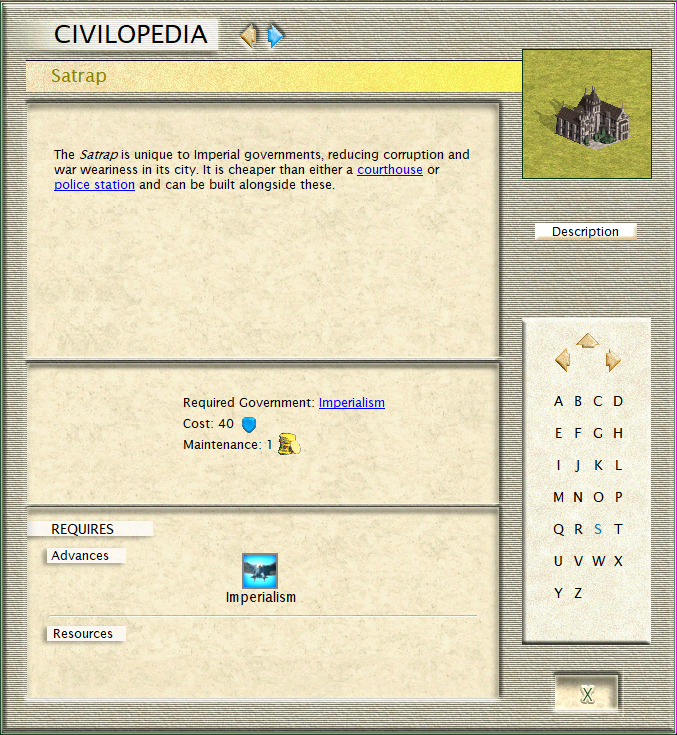 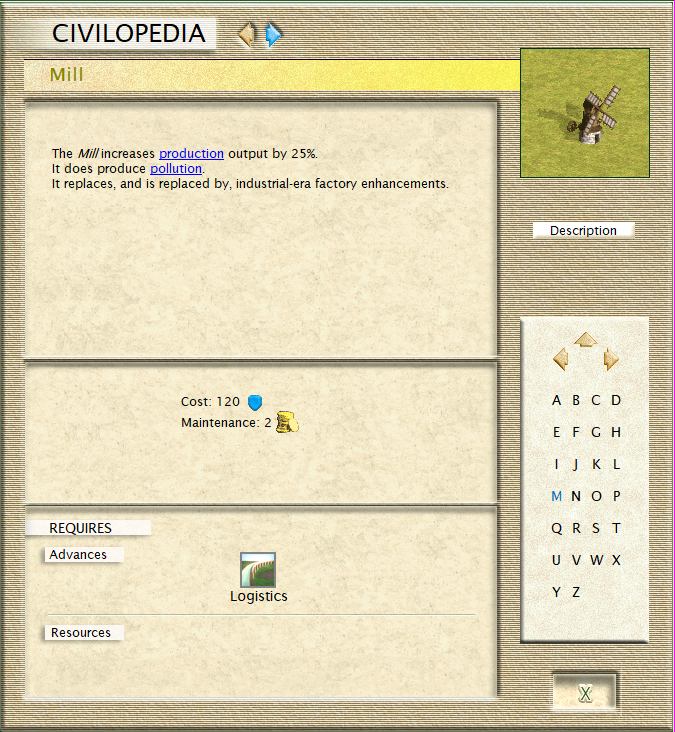 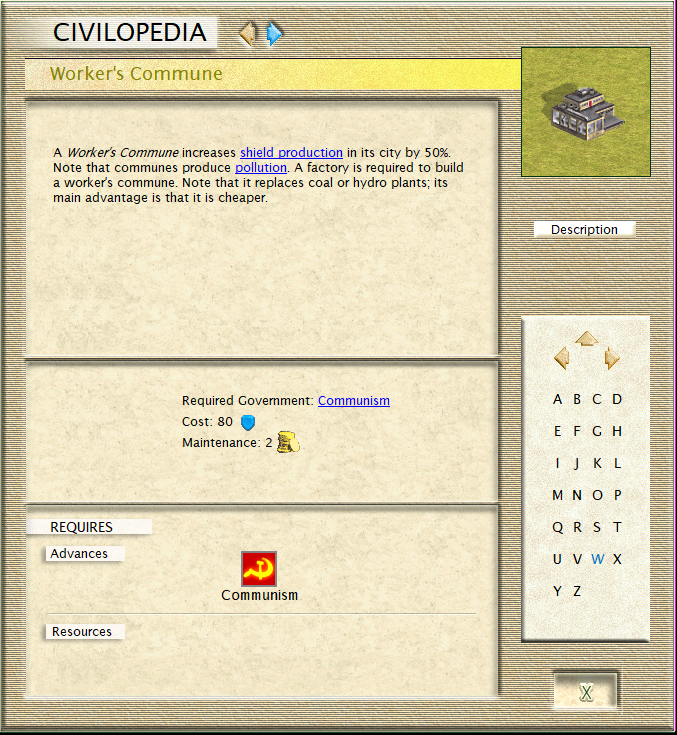 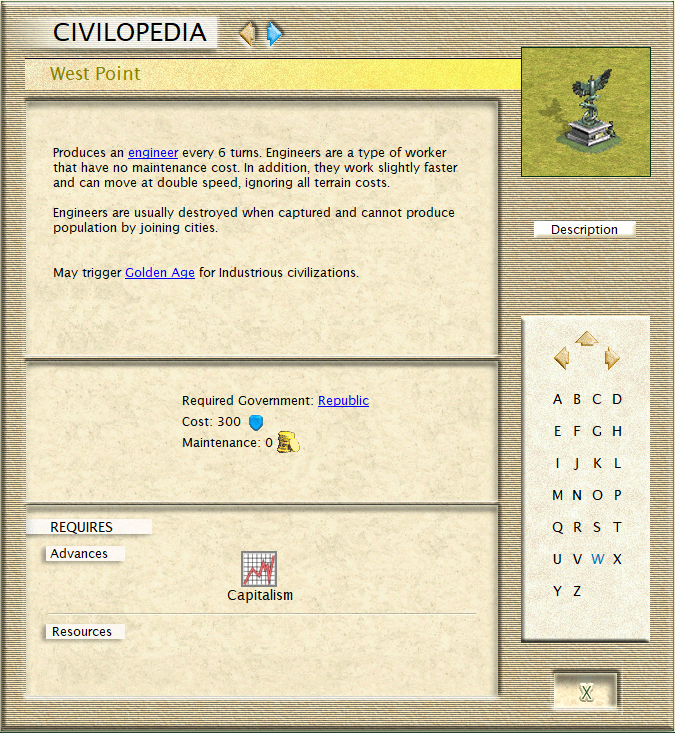 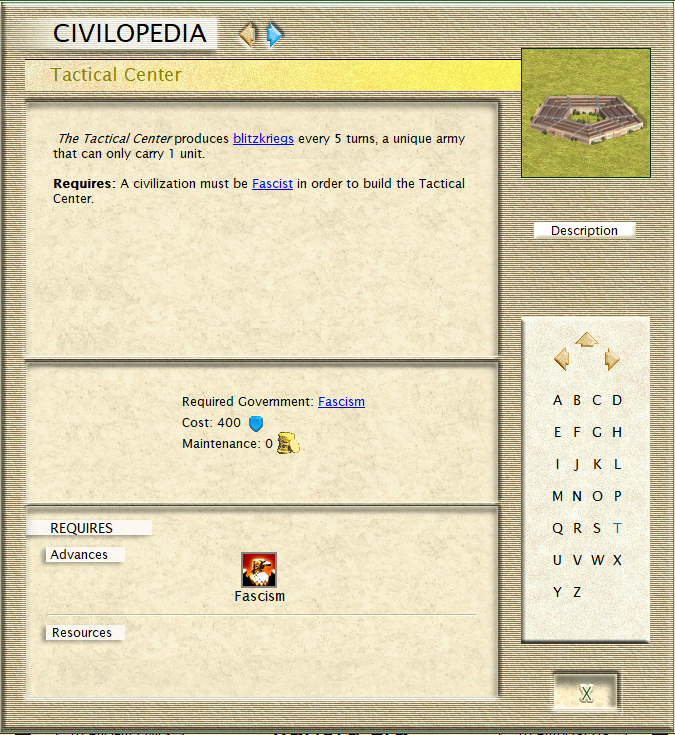 How do I play?
Wouldn't this suffer from multiplayer bugs? You can load these games in singleplayer briefly:
Can I play multiplayer? Yes! Feel free to run your 10 turns with someone else playing other civilizations. Anything from 1-8 works. They can do the same for you.


If issues arise, I'll modify the rules to better accommodate them. 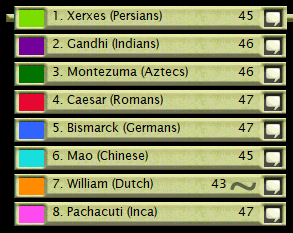 Discuss this world on Discord: https://discord.gg/Bfrue575Qz

In a short 10 years, the Dutch expand their fledgling population to nearly double thanks to a healthy settlement along the coast.
(It's the start of the game, so not much interesting has happened.) 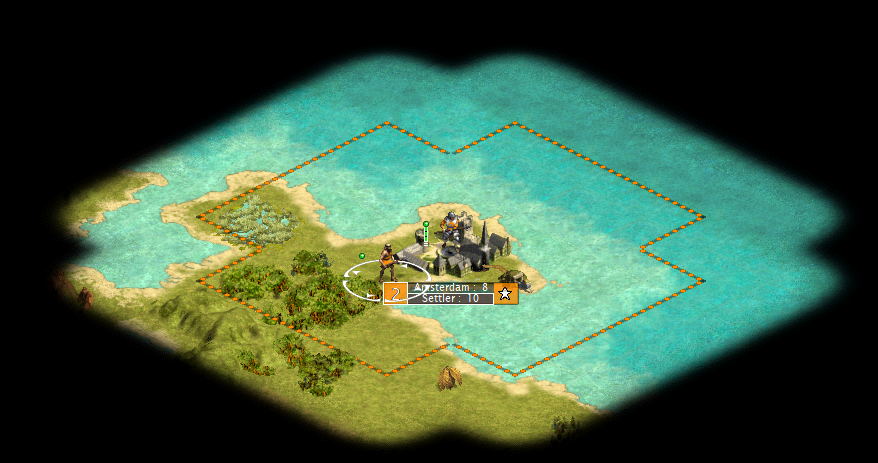 I think this is quite an interesting concept, with some good civs to choose from. I will happily join in and see how it goes. But how does the play order work? First come, first served? What if I play 5 turns and upload the save but, for example, Quintillus has done the same and now we have 2 branching saves at the same time?
EDIT: Just noticed you start off with a Pikeman? I didn't spot anything about that in the scenario rules.

Toxicman007 said:
I think this is quite an interesting concept, with some good civs to choose from. I will happily join in and see how it goes. But how does the play order work? First come, first served? What if I play 5 turns and upload the save but, for example, Quintillus has done the same and now we have 2 branching saves at the same time?
Click to expand...

First come, first serve, exactly. In a more popular game, say, Civ V, that might be a problem. Here, I have a suspicion overlap won't be very common

I guess if Quinti decided you did something way more interesting, he could cancel the post, but that might cause more problems down the line. We'll say that's not allowed after 2 hours - a tight deadline that shouldn't interfere, and still gives the option.

EDIT: Just noticed you start off with a Pikeman? I didn't spot anything about that in the scenario rules.
Click to expand...

I built it. Oh, I never mentioned that you start with them unlocked. I'll throw that in there.

In Chinese news a brave longbowman heroically survives an ambush by a barbarian swordsman, meanwhile local Chinese workers work on a grand road to the local salt deposits on a mountain nearby. 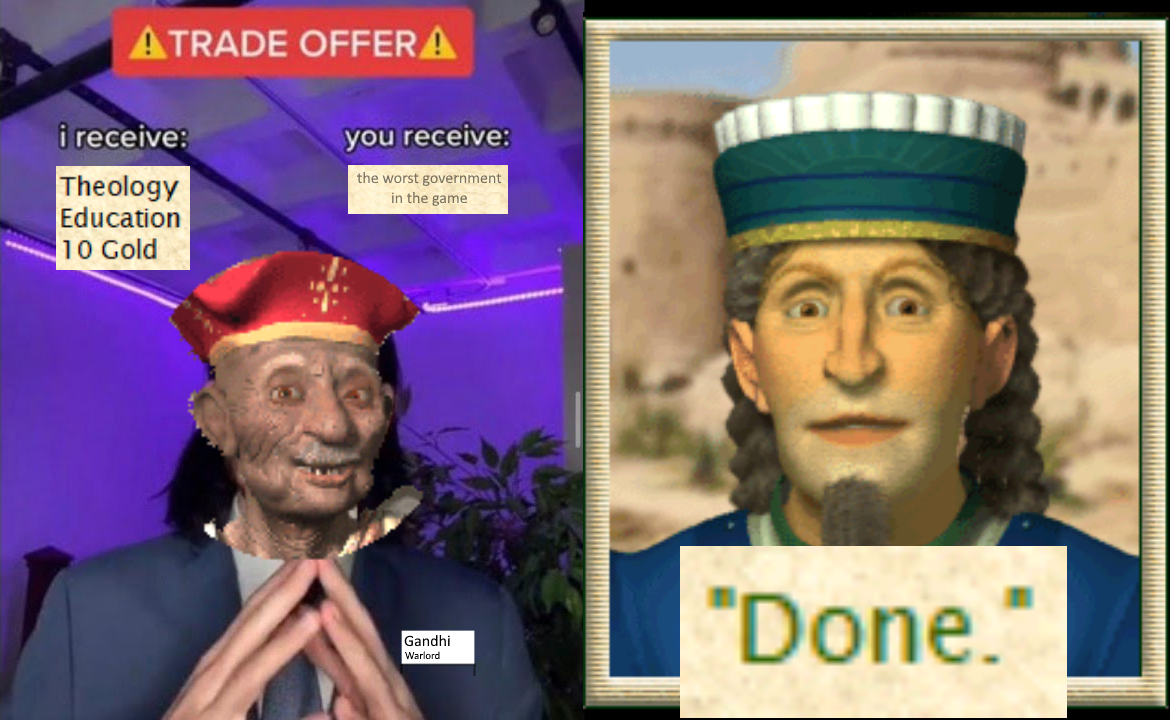 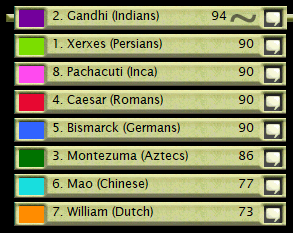 Meanwhile the Chinese while lagging behind have discovered the Dutch people, who inconveniently only had 30 gold to trade.
In other news a pikeman has stumbled upon a barbarian camp nearby

The Roman empire doesn't look too special when I load. I notice Persia to the north but no communication with them yet. Barbarians seem to be my main problem here. 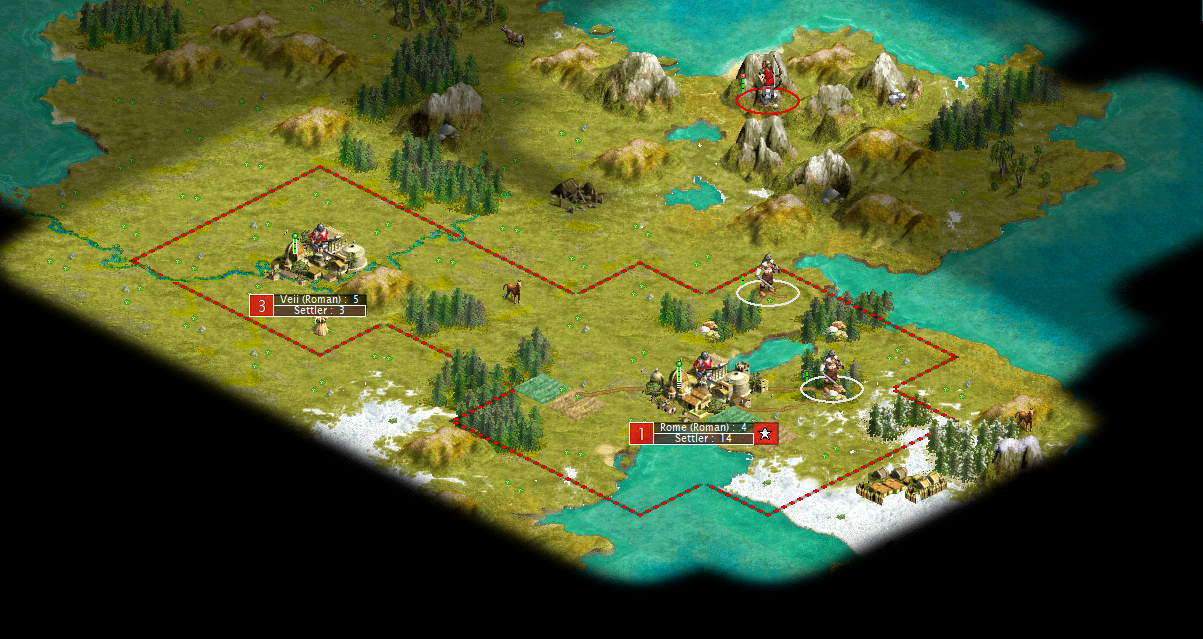 After a bit of cleanup, we take a barbarian camp! 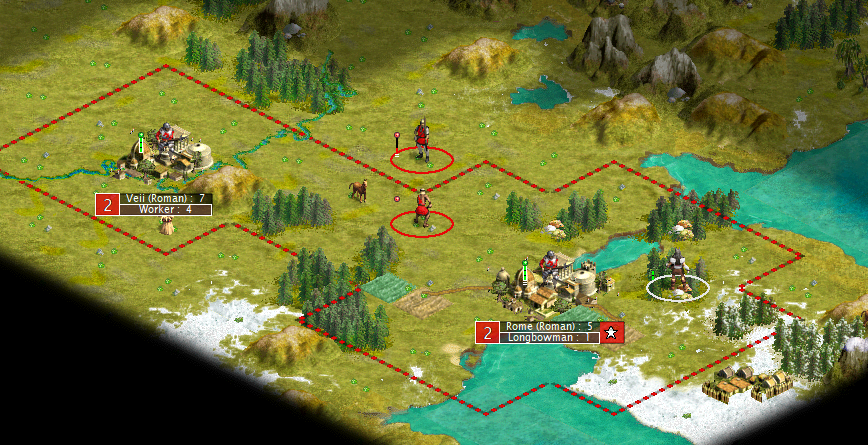 I take a risk to claim the goody hut to the southeast of Rome. It does not pay off AT ALL. 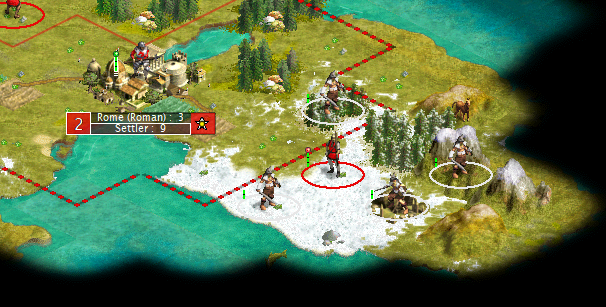 Finally the Roman Empire after 51 turns played total. Not much has changed, but our military has improved and the barbarian threat is much lower. 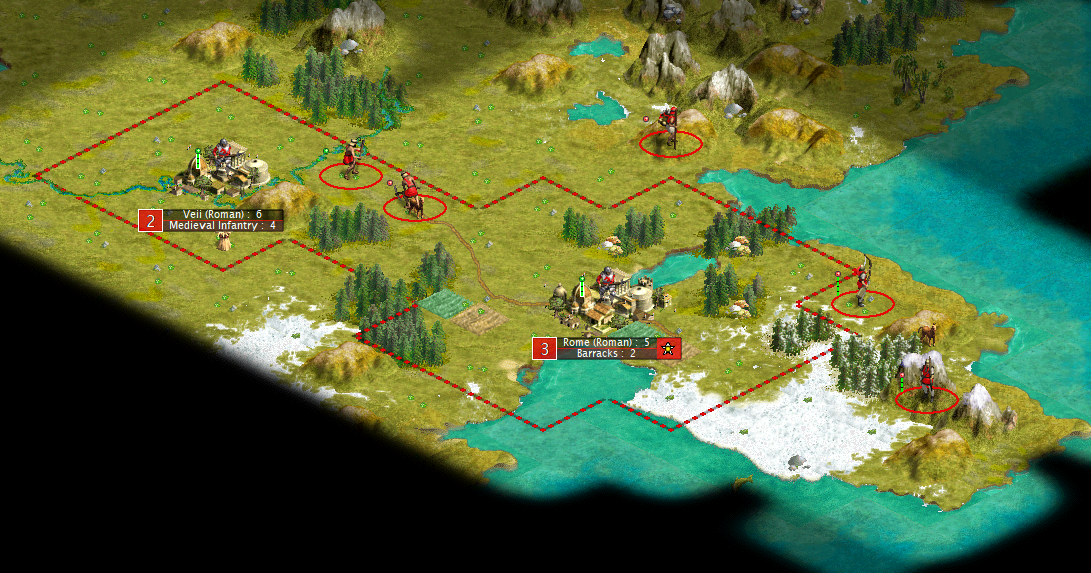 War Declared: The Germans are now at war with the Dutch!

Meanwhile, in the Dutch empire...

No workers! And the AI is idling two settlers... this won't do. We don't have escorts, but I have the power of stupidity on my side, so they're going to move out anyway!

Never punished.
Also, Germany proposes a trade: We give 17 gold, a map, and we'll receive nothing. After refusing, they propose a compromise: they're going to invade us and take it by force.

Seeing that there's not much more I can do for my empire, I'm going to stop early. The AI gets a slight production and food bonus, so whenever the remaining moves are obvious, I'll leave it up to the governors.
Also, welcome to the game dirtysock and Toxicman007!

On the other side of the Dutch-German war 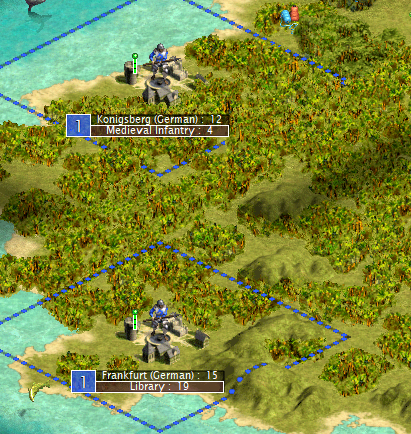 Fantastic city spots by the AI as you can see
Fortunately, the other German cities are actually decent, so a sizeable army is quickly amassed
Suddenly the barbarians nearby magically disappear, no idea why

As master negotiators we even convinced the Inca to sign a right of passage for the low cost of nothing!
Be scared Dutchmen

Definitely a neat idea! Is Anarchy time modified? If not it might not be very feasible to switch governments for non-religious civs.

India has a large, cold empire, and is a bit wonder-crazy. 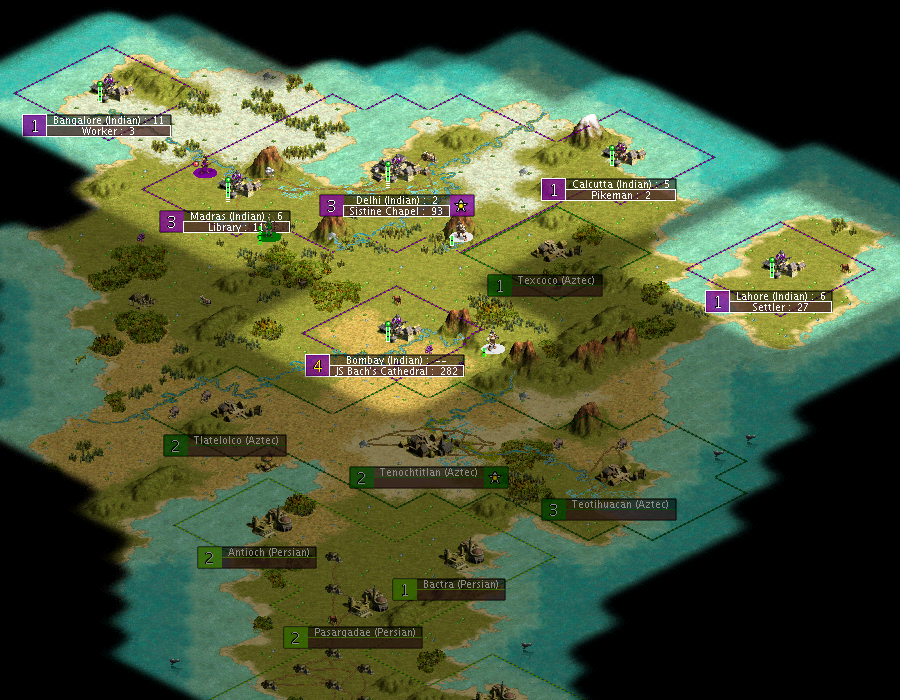 We notice Delhi is a science powerhouse and switch it to a Library before letting it try again for Sistine. We also found Karachi to the west, discover a couple islands with our previously-idle Galley, and make progress towards building a road to Saltpeter. 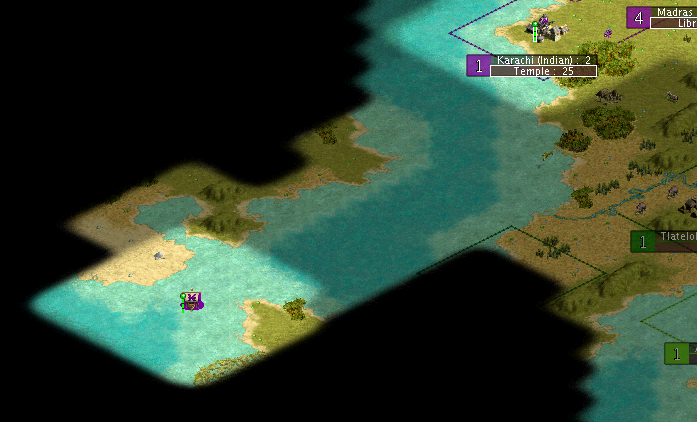 Lastly, we sign a right of passage with Montezuma because his Longbow was uncomfortably close to Delhi but we didn't want to threaten war and have him decide that was a good idea.

Very eventful turns for the Germans

Of course, the cities are producing random stuff but the ai actually managed to move the army, great stuff!

The actual battle of Eindhoven is a smashing success, partly because 1 of the pikemen decided to check on the local fisheries in the marsh nearby
6 gold is looted
Then out of greed the settler rushes, not waiting for the escort
Horrible idea 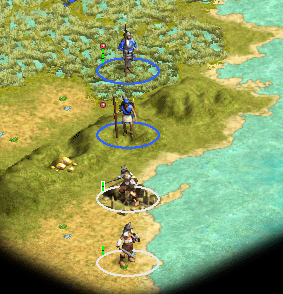 Meanwhile, the Inca propose to me a strange deal, nothing for nothing
Confused, I deny the deal 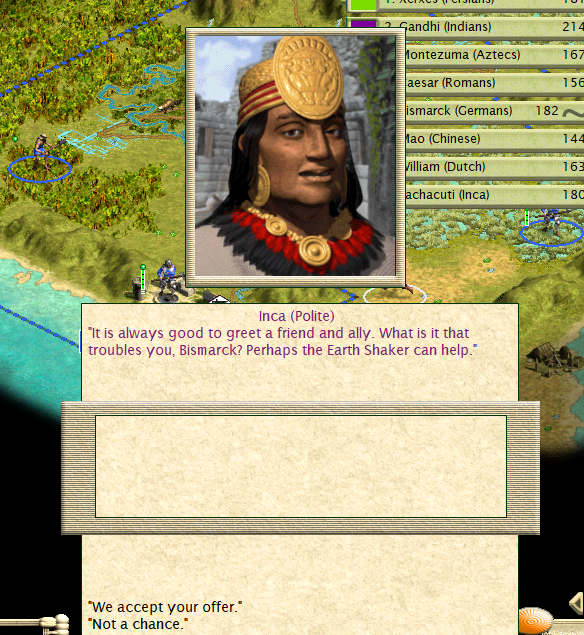 After a mild staring contest, the Dutch pikemen backs off for fear of what this German will do to him

Going back south, a settler, unaware of invasions, wondered right in front of the German army
These workers will help tremendously building the great road over the marshes 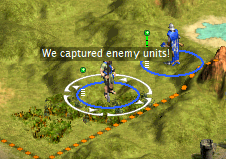 Then there is a startling discovery
The Dutch have guns.

May he rest in peace
Back at home though, the settler murderers are dealt with brutally

But then the battle of Utrecht starts
1 casualty, but a worker and city under German control 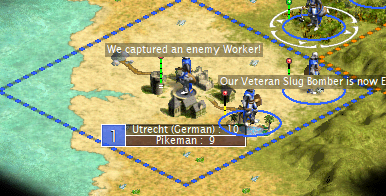 Do you regret not giving us 17 gold and a map, Hyreon?

Actual save since file limit was hit

Peace has been made by the Dutch with the Germans.

A double turn, dirtysock, when turns are 10 times as long? That's quite cruel!

Excited to recapture lost Dutch land, and sour the Germans' recent advances, I set out to attack the Germans with -

Ah, right. The AI's been in charge for 30 turns. Not quite the stack of death I was hoping for. What have they been building, anyway? 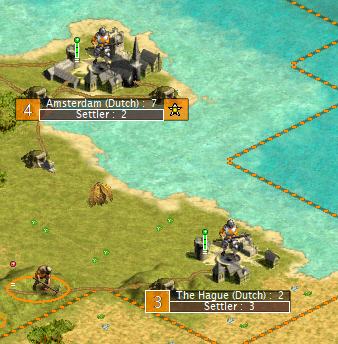 Hmm.. expanding when surrounded by enemies. I've got my work cut out.

Okay, fine, I'm exaggerating a little bit. They did prepare an attack force! 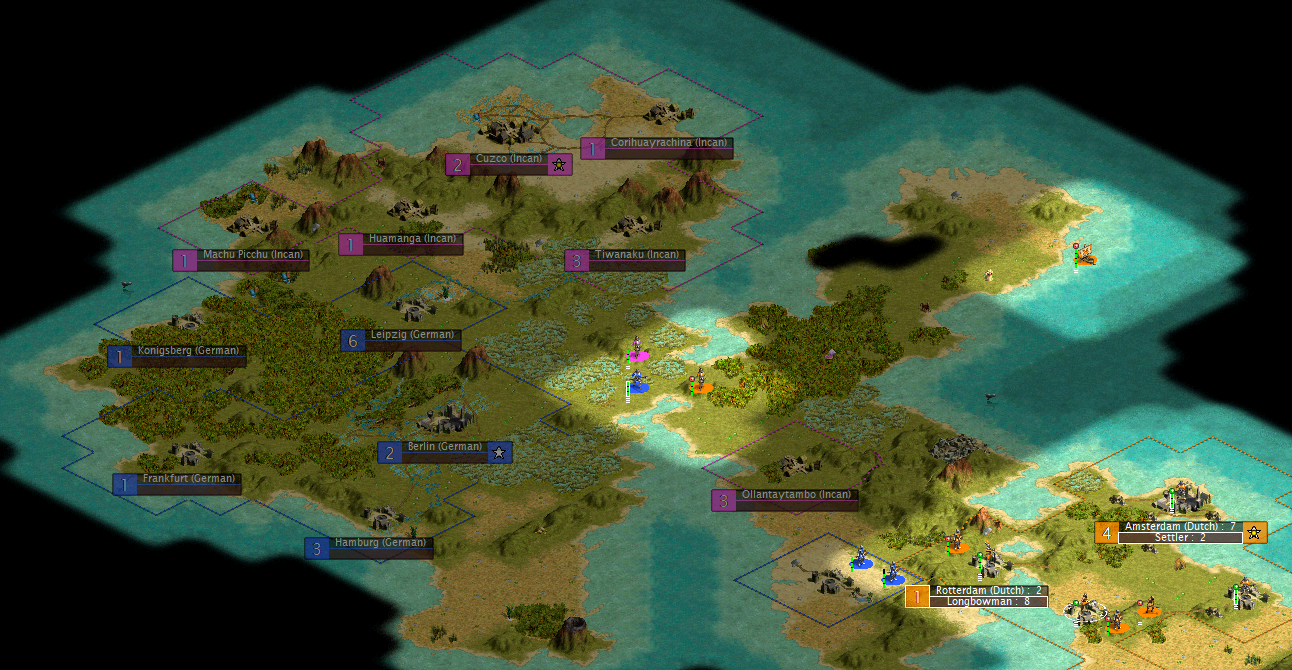 After laughing at my deplorable situation for some time, I get to work. The AI is predictable and greedy in their attacks, so by moving my Pikes in, I can eat quite a bit of infantry. And no more settlers! Not until we get the cities we already have back, and with a good garrison. Barracks and units only. I'll need that salt badly, and more production to get things in shape, so the workers aren't the worst. As long as they're not idle!
Despite some shoddy luck in losing my only musketman, I do make even trades on the defense, and Germans force the survivors to go defensive. Unfortunately, they do get a Pikemen to arrive on the scene. With my army as it is, there's no way I win it back in 10 turns. My goals have quickly changed from recapturing my city, to merely scaring them into white peace. I build an attack force, but it would take a minor miracle to accomplish something. An ex machina moment. 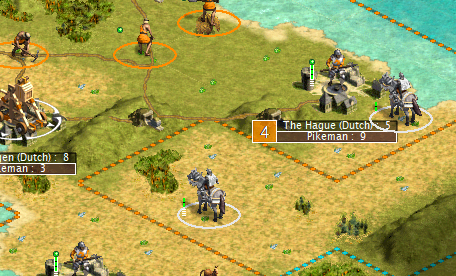 When I said "ex machina", I had in mind "deus ex machina" - God in the machine. But instead, I got a little "diabolus ex machina" - devil in the machine. Barbarian knights! From Chinese territory?! How is it even possible? When the battle was already going terribly, it went even worse. I could no longer stretch myself so thin, so my goals have deteriorated even more. All this time, Germany has been willing to take peace for Rotterdam - my last supply of saltpeter. But nothing else. Now, I'm going to make any peace deal that keeps Rotterdam, because without saltpeter, the Dutch are straight-up dead in the Industrial era.
I open the trade menu, and eventually find something they'll take. But it's not exactly what I hoped for...

This is nothing less than utter defeat, and yet it seems like the wisest plan of action. Note to self: If you're going to declare war, show up! 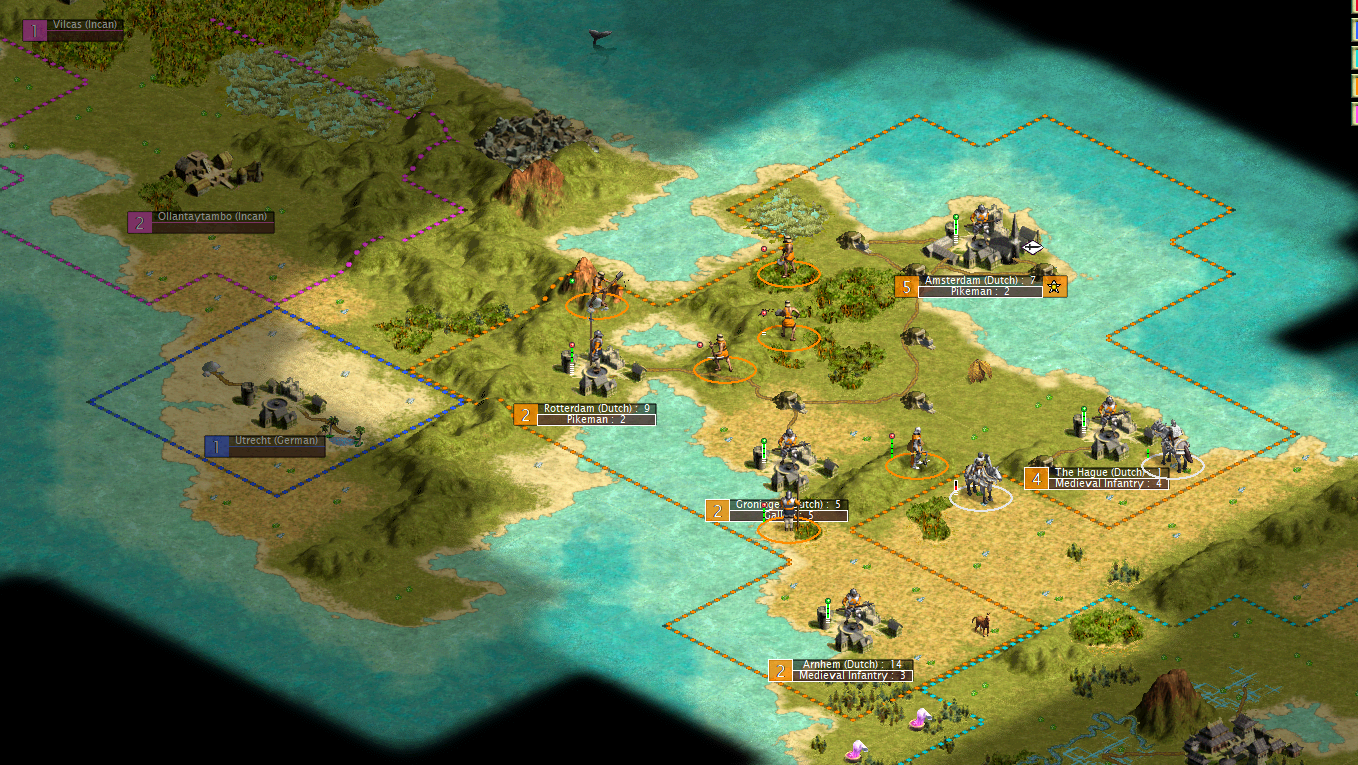 poopsock said:
Do you regret not giving us 17 gold and a map, Hyreon?
Click to expand...

The save file's coming up soon. I've just got a few admin things to do with it. Also, welcome to the game Quintillus!
Last edited: Aug 5, 2022

Some drama in that war! Looks like the Dutch are on the ropes.

I tallied up playtime by civ so far:

Using my cheaty admin powers, I've extended the game to 10,000 turns, since time limits aren't supposed to be a factor. Hopefully it doesn't come close.
With that in mind, we're at turn 97, almost 1% to the end. Here's the global power rankings for everyone! 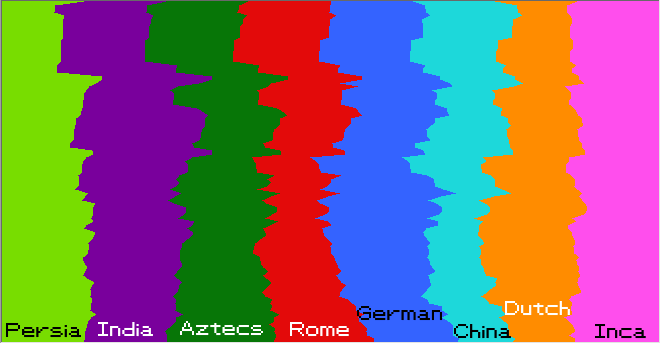 Looks like there's a negative correlation between human playtime and power level. I, for one, welcome our new AI overlords.

Some updates to the rules, also.

Now you may be wondering where is the mighty German army?
The sad news is there seems to be no survivors from the Dutch-German War of Gold
However, being Germans, the AI did a fantastic job rebuilding

In the east a German pikeman fearlessly marches through Incan lands, killing a med infantry with little trouble

Anyways, after some casualties, Machu Pichu is captured and Huamanga is soon to follow

Having taken Machu Pichu, I forcibly take what I can from the Incans, knowing the AI could mess up my advantage

Nobles' Club 320: Montezuma of the Aztecs