C7 (working title) is an in-development 4X strategy game with a historical focus inspired by games such as Civilization, Galactic Civilizations, and Humankind. We aim to create a new game that looks and plays like classic Civ but incorporates features from the best of the genre and our own dreams.​
​
Download the latest C7 here!​
​
Official links​
Official C7 homepage!​
Official GitHub page!​
Official Discord server!​
Official subforum: you're in it!​
Status


At this stage, C7 is not yet a fully playable game, but becomes a little bit closer every month. Take the latest release for a spin, leave some feedback, and follow this forum for updates. User discussion happens here at CivFanatics, development activity happens on GitHub, and a bit of both happen on Discord.​
​
​
Spoiler Sample screenshot from Babylon 0.1 : 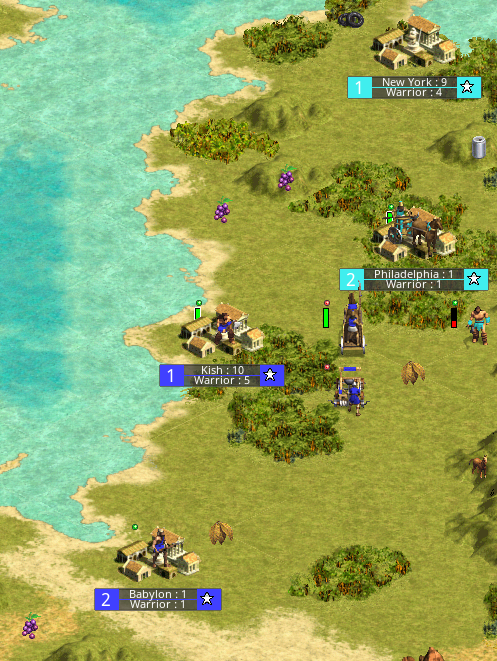 ​
​
The current release is an early pre-alpha with basic engine mechanics and artwork, and is available from the project homepage at c7-game.github.io. We will be making periodic releases that introduce new and improved mechanics, graphics, mod capabilities, and more.​
​
For now, an installation of Sid Meier's Civilization III Complete (or Conquests) is required for art assets.​
​
Release threads​
Aztec​
Babylon​
Carthage Preview 1​
Carthage Preview 2​
How to get involved


Find the project interesting enough you'd like to contribute? See the Contributing Page on our Wiki for more information!​
​
At the moment, additional developer bandwidth is probably the most-needed asset, but all sorts of help (art, writing, project management, sheep-herding) could be useful.​
​
Poll: system requirements​
Get help or report a bug​
Request a feature​
Technical stuff

​
C7 is an MIT-licensed open-source, iteratively developed, cross-platform 2D 4X strategy game built with the Godot Engine and C#. The project was conceived by several users at CivFanatics but is open to anyone who is interested and able to contribute. We are developing C7 with Civ3 in mind, redesigned from the ground up with new features to support enhanced modding, improved graphics, and modern systems.​
​
Developer wiki​
Tasks for new developers​
Technical resource index​

Is this a Civ3 mod?
No, it's a whole new game! It is inspired by Civ3, the attempts to improve Civ3, and our frustrations with Civ3. But it will go well beyond Civ3. C7 is not to be confused with the Civ3 executable mod C3X or other enhancements. This is an entirely new project written from scratch.

Is this a Civ3 remake?
Not exactly, but it will greatly resemble Civ3 gameplay in its default state. We hope to borrow the best of features from classic and modern 4X in a more flexible game. There may even be game modes resembling other titles as well. C7 is something between a game and an engine, built with mods in mind.

Hasn't this been tried before?
Yes, there have been several attempts to re-imagine Civ3 in years past, to varying degrees of flop. We think it's worth trying again, with two important changes:

What does C7 mean? Is it supposed to be Civ7?
No, C7 is a silly acronym and only a working title. It has no relation to a hypothetical Civ7.

Then what will it be called?
We don't know yet. Naming things is hard.

Will I be able to reuse my Civ3 content in C7?
Yes! We intend for C7 to by fully compatible with all Civ3 artwork and even entire mods, while also using our own file formats for more advanced features. Technically you can already use some of your own artwork by replacing the default files.

Will you include my artwork in C7?
For now we are reusing artwork loaded from your local installation of Civ3. If you have custom artwork that you fully own (ie, it is not derived from Firaxis or any other work) and you would like to license it to us for redistribution in C7, let us know and we will consider it. Ultimately we will need freely licensed or public domain content to replace almost all of the Civ3 files.

When will it be finished?
We don't know. Not anytime soon. This is a huge project and we're all working in our free time. We plan to make incremental releases at least every few months for the foreseeable future. Watch this forum, join Discord, or bookmark the project homepage for updates.

Where can I play C7? What if Civ3 doesn't work on my computer?
C7 supports modern Windows, Mac, and Linux. It currently uses some files from Civ3, but Civ3 does not need to run. The files only need to be present on the computer.

Will it be free? What about the Civ3 files?
C7 will always be free and open-source, meaning anyone is allowed to make and share their own changes. No Civ3 or other restricted content will be included in the game. For now that means you must have Civ3 installed locally, but eventually we will replace all content with our own for a fully stand-alone game.

How can I help?
See "How to get involved" above. For now most of the work is development, but you can still play and give us feedback. Also, spread the word!

What about money? Do you have funding?
For now, there is nothing that would be helped by adding money. All of the technologies and services that we use are free, and at our scale it's just not practical to hire contributors. We will consider crowdfunding options as the project matures, if we're able to make use of it for things like commissioned artwork or bug bounties.

What if I have other questions?
Ask away here in the forum or in Discord!
Last edited: Aug 18, 2022

This really is impressive and exciting. Would you, or the "team" consider being supported through Patreon etc?
The obstacle to freedom

Submit your name here in order to be judged by your peers!​

We've tossed a few funding ideas around, and Patreon's not a bad one (I have a great deal of Wall Street-esque experience, and wanted to try a 501(c)(3) - not-for-profit corp -approach; but so it goes.)

Aside from all that - Welcome to the team!


An Intro To & An Encyclopedia Of Modding
FUBAR Editor Documentation Using Culture to Influence AI Improvement Build
The Big Question - How Does The AI Choose Which Units To Build?​
You must log in or register to reply here.