What is a district, why is it so hard to repair?

The breaking out of districts in VI was a radical change and personally am pleased with it but the first stab escalating cost has been an ongoing debate.
I have been doing pillaging to death of late and it becomes clear there is a time when it is worth more to pillage a district than capture it. The funny thing is you can pillage a bank and market quite late and still have time to repair and get them functional but repairing a district takes so long that it is worth pillaging everything but the district.
That once again takes us back to what is this district that makes it so much more difficult to repair than a market or bank?
Equally for those that refuse to pillage, a hurricane comes in and wipes out my campus and all buildings. Why does it take 30 turns to repair a campus while so much less time to repair my library and uni?
I see why the escalating cost design came in but perhaps with all of the other considerations since it is an area that should be changed?... why?
Well pillage an AI’s district and they will just never recover it. 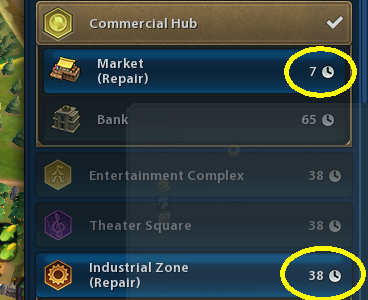 I don't see these high numbers so often anymore, except if your city has minimal production capability.
Yet I agree, repairing a district should cost way less than it currently does.
G

Bibor said:
I don't see these high numbers so often anymore, except if your city has minimal production capability.
Yet I agree, repairing a district should cost way less than it currently does.
Click to expand...

Which is the main problem in this case as the ID is the pillaged district.
S

The method and degree of cost escalation make no sense. Many of the issues with districts can be extrapolated from that. I've been tinkering with ideas for modding them; currently, scaling them a la workers/settlers makes the most sense to me from a mechanical standpoint (of the available options).

Vote for me or die

Well, if you capture a city, I guess it may cause you to refrain from pillaging the district itself? Probably not I guess; the yield is still probably going to be better than the passive yields.

And then disasters, well.... that is annoying.
With great power comes the great need to blame other people.
Mods I use in Civ 4: BUG

I think there should just be a way to "externally" repair a district. So, using military engineer or worker charges (plural intended) for example.

I agree that repairing pillaged/destroyed-by-nature districts and buildings takes FAR too long. Enemy stops on your farm to pillage it? It's basically free to repair. They stop on your district? It can take like 20% of the game. all for the same movement cost from the enemy.

I suspect the intention was to emphasize the difference between a Building, no matter how elaborate or useful, and a District as a game mechanism.
I also suspect, as usual, they didn't bother to test how significant the difference in repair costs was.

Agree with @Cerilis, though, that there should be some difference: if Districts and Buildings can both be repaired with a single pass of a Worker, no charges, no time required, it cheapens the District too much.

I rather like the idea of using Military Engineers or multiple Charges to affect District repairs. Since you can't repair Buildings until the District they are in is repaired, that would still give some time element to the total repair bill: 1 turn per District minimum, plus 1 turn per Building in the District.

Another possibility beside Workers or Military Engineers, if they want to keep District Repair expensive, would be to allow a Great Engineer to repair a District the way a worker repairs a Building: no 'cost' involved, but you have to keep a Great Engineer hanging around ready for the job and thus lose whatever Bonus he would otherwise provide.
"We have met the enemy, and He is Us" - P. Possum

I would only pillage districts when I'm low on gold or they are providing 2 combat strength to the city centre, and then only if the right card is in.

Archon_Wing said:
I guess it may cause you to refrain from pillaging the district itself?
Click to expand...

It now does, yes. If you see from my screenshot, 38 turns for a district and only 7 for a T1 building... and yet both give the same pillage benefit. This is my confusion, just what is in a district itself to give such good yields.


Boris Gudenuf said:
I suspect the intention was to emphasize the difference between a Building, no matter how elaborate or useful, and a District as a game mechanism
Click to expand...

Yes, 100% agreed, just think as it currently stands, considering it is the district infrastructure perhaps you should get nothing for pillaging and perhaps 25% on repair rather than 50%
Experience , Loyalty , Chop Example & Tables , Levy units , ZOC , flanking & Support ,LOS, Rock Bands, City Combat , District Discounts , War Weariness

I think they're all neighborhoods of a sort, though I'm not sure if that really makes sense. I like the idea of them, and most aspects of their execution so far, though I think they need a little extra spice, like applying the barracks/stable model to the rest of them and expanding on it further.

I don't think high repair costs are justified for them, the escalating cost model is probably enough. Taking 38 turns to repair an industrial zone is way too excessive, especially in the late game once you have the power buildings setup. In one of my recent games as Sweden the AI wouldn't stop recruiting partisans from a neighborhood of mine that was close to my key industrial zone - they would beeline for it and keep pillaging it until I basically had to treat that neighborhood as a war zone :smile: I guess my spy was sleeping on the job.

It would be better to have a pillaged district just be destroyed, but that would deny the owner (original or conquerer) from the hard work already invested.

Such is my rationalization, anyway.
A Prince playing Epic-length games on Huge continents & 12 civs. As Rome.
K

The problem is Firaxis's failed attempt to discourage infinite city sprawl.
Districts get more expensive the more you build and also repair ,whereas the buildings have fixed cost. the problem is that whenever a district gets pillaged the cost is recalculated to the latest cost ( and not the original cost to build ) and as such the more cities/districts you have by the endgame the worse it becomes. the cities have already used whatever chops there was to build those districts anyway , and you cannot spam traders immidiately, have to wait for x turns.
An east fix would be to fix the cost of repair for districts. it would also help with the disaster struct districts late in the game.
T

Would it be out of place to point out that it's not very likely that it'll actually take 38 turns? Once population rebounds, tiles are repaired or "fixed" (AI builds too many farms on hills, not enough mines) and trade routes are possibly routed from the city it'll be a much smaller number.

The issue is that probably repairs should be a fixed number of time, scaling to game speed, and not a scaling production cost where a city that never had good production to start will always feel like it takes ages compared to your industry focused cities. The general gameplay principle in 6 where you can super specialize cities has been great.

Maybe have it be 1 turn per building on standard, but put a small 3 to 5 turn cooldown before you are allowed to start repairing it from the moment the district/building was pillaged kinda like they do for repairing city defenses. The basic idea being that you can still hurt a player by pillaging, but don't put them in a situation where they basically have to give up on the district.

The fact that you can't spend gold to speed up repairs doesn't quite feel right considering that Aid request competitions have you damn flowing in the stuff. Not sure how I feel about that particular change to competition. Just got a game where I was subject to a flood, and as a result, for 30 diplo favor since none of the AIs voted against it, I have a screenshot where I was given something like 30k gold... Who needs Big Ben?

Was debating on making a separate thread about this, but I'm wondering if a cheese strat can emerge from one of my games. Build as many cities on Rivers as you can, with districts on them to boot. Don't Dam any of them. Get to Medieval. Trigger a World aid from a major flood. NOTE: Currently the AI pretty much don't vote against it, and may even waste favor voting for it. Get like an absurd amount of gold, even on Standard settings... Snowball into a win.

For the same reason it took 12 years to rebuild on the WTC site; bureaucracy.
Holy Prophet of the Fanatics

Socrates99 said:
Would it be out of place to point out that it's not very likely that it'll actually take 38 turns? Once population rebounds, tiles are repaired or "fixed" (AI builds too many farms on hills, not enough mines) and trade routes are possibly routed from the city it'll be a much smaller number.
Click to expand...

You are absolutely correct, however, the reality is it is higher than 10
The major difference to this is coastal cities, they are a nightmare to get going again.
Experience , Loyalty , Chop Example & Tables , Levy units , ZOC , flanking & Support ,LOS, Rock Bands, City Combat , District Discounts , War Weariness

As far as I grasp this game , it feels district are always a big thing. You can't buy them unless you planned ahead using reyna or whatisname-religious guy. So it feels natural that a pillaged district would cost more. When I plan on capturing a city I tend to leave districts (unless it's early in the game) and focus on pillaging ...well, everything else.
Entropy isn't what it used to be

It would be better to have a pillaged district just be destroyed, but that would deny the owner (original or conquerer) from the hard work already invested.

Have to take some issue with this. What you are forgetting is that the resources, tools, and machinery available to rebuild are also much greater as infrastructure becomes more complex. If it takes more effort to rebuild, there is more effort available IRL in the form of manpower, gold, and power machinery - which is not reflected in the game.
"We have met the enemy, and He is Us" - P. Possum
You must log in or register to reply here.

S
Too much sacrifice