Win a copy of ZOR: Pilgrimage of the Slorfs

Win a copy of ZOR: Pilgrimage of the Slorfs
There are a lot of Civ fans, as you know. As it turns out, some of these fans are also game developers, and long time lurkers at CFC!
One of them is @Righteous Hammer Games , who will release his game ZOR: Pilgrimage of the Slorfs on August 30 on Steam. He's excited about the release, and also wants to share his game with us - so much so he has offered us 3 keys to his game, to give away to you Civ-fanatics!

What is this game?
Zor: Pilgrimage of the Slorfs is a turn-based tactics game. You command 2 little monsters called Slorfs through various battles, build up a card deck, and improve your base, while following their journey on how to survive on this strange planet. So it's not exactly a civ-game, but we are all very familiar with turn based combat, and hopefully this means you, the community, will like it.

How do you win?
Below you see a selection of the slorfs (the orange and pink in the center) and all their enemies. As you know, we have also some weird big monsters in Civ (e.g. the Giant Death Robot). Tell us which of these monsters you'd rather have than the GDR, and for what reason. The 3 best entries (as judged by the moderators) will win one of the keys.

You have until August 26th to participate, and we will announce the winners on August 29th, so that you have your keys when the game is released. 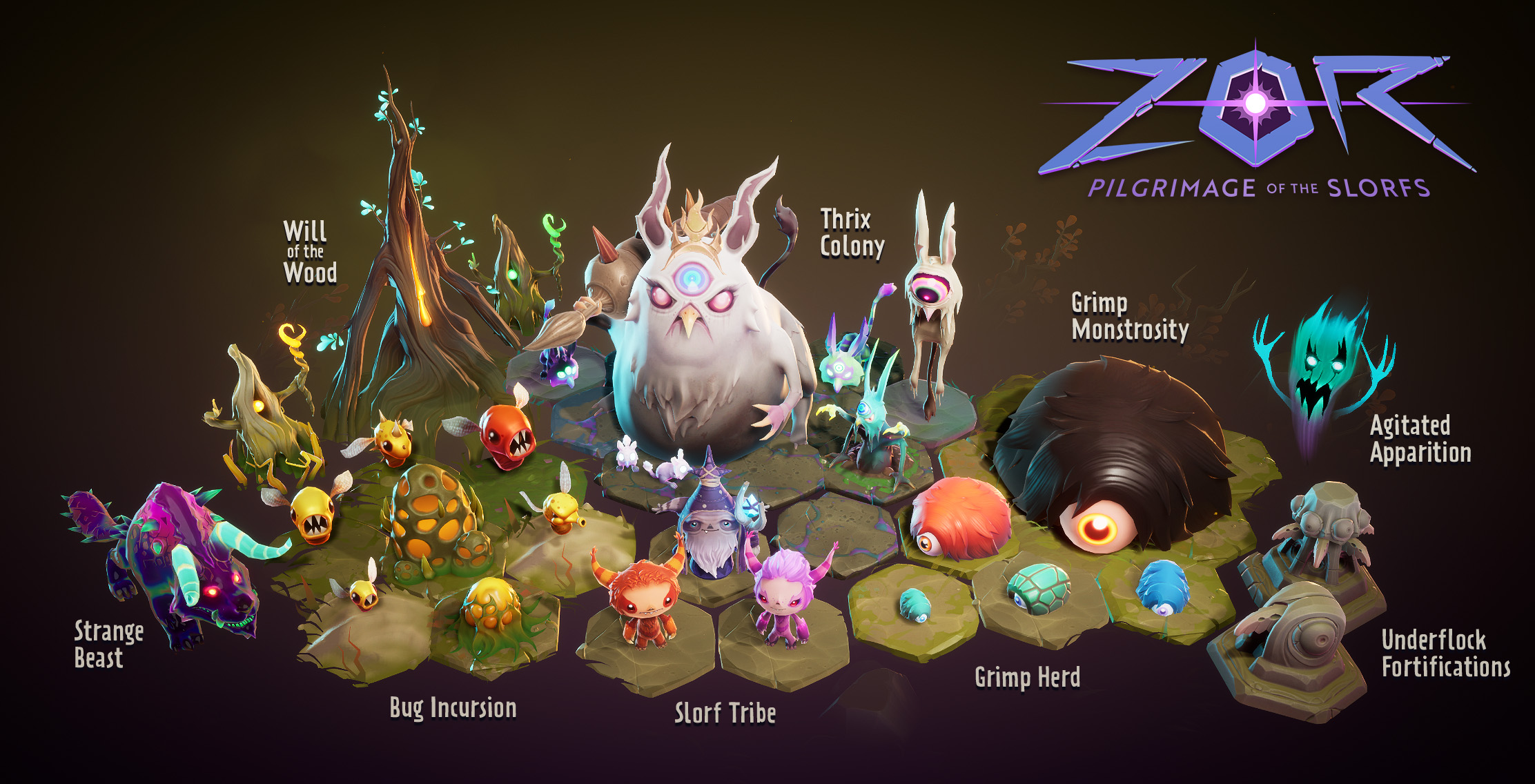 I quite like the "Will of the Wood" trent entities to be honest. Like, having the power of Nature feels like quite a Kupe thing to do, and I really like playing with him in civ 6 kek

I like the design of the "Strange Beast". It looks like a creature which mutated after a nuclear accident and since we already have these in civ it would just make sense to have units based on this. It could also fit well in apocalypse mode because of this theme. If there is a BE2 there would also be reasons to include a unit like it (although that goes for nearly all of them).
S

Thrix because they got Crazy Eye.

Also Giga-Thrix seems to be the only one wearing a hat, which makes me think there could be  more hats, and one of those hats could be a sombrero, and they could use the sombrero as a range weapon and also to rest under when it gets to bright out for their crazy eye

Bug Incursion, of course, to remind me of Civ VI as I play another game.

Aiken had been tending his families flock of grimps. Slow moving and easily agitated, non the less they were vital for the colonies survival. The grazing herd slowly ambled over the terrain, Aiken paying attention to any breakaways, encouraging them back to the herd with a series of whistles and clicks.

Their variety was their strength. An generations of selective breeding had resulted in a few curious outcomes. They tilled the land, turning over debris and chomping through brash and Bush as needed.

It was a honest job, but at times tiresome. For if not watched they could quickly become disengaged and wander off, chomping their way through anything in their path. If not careful some of the colonies vital network of supply lines would be severed, the grimps gorging themselves on the flow.

For the flow of water and flimflam must not be disrupted. The great breeding pool that the Monstrosity resided in, if cut off, would result in a chaotic expulsion of energy, neutering nearby networks. An angry Monstrosity was not to be trifled with!

The monstrosity yawned, its great eye turning to Aiken. What did it want? What was it trying to say? It's physic gaze held sway for a moment, Aiken knowing he must pull away. Driving the grimps on, his shift would soon be over.. But the gaze pulled him in.. Maybe it wouldn't be so bad.. Maybe he should just let it free.. If wanted freedom.. Sleepy, so sleepy..

Aiken settled by a brook to quench his thirst. A little nap wouldn't hurt would it?
Last edited: Aug 21, 2022
The obstacle to freedom

Submit your name here in order to be judged by your peers!​
G

The will of the wood with the staff looks like he could be really fun to replace the GDR in civ 5/6, can you imagine the sheer chaos of every unit on the board being moved at the end of the turn in a single direction? it would be so fun, you could perhaps even have it so that you could choose the direction that all units move at the end of the turn potentially uprooting all the defenders from their fortifications and making your army advance!
A

What's the one thing we know about the Giant Death Robot? Other than that its Giant. And Deadly. And Robotic. That's right, that it requires Uranium. And so I look at those creatures and there is a clear candidate for the one who's eyes have the radioluminescent glow of a creature fed nuclear fuel pellets: the Strange Beast. Those deadly horns and strangely spiked beaver tail also suggest that it will be worth sacrificing a nuclear weapon for. The enemy will either run in fear, or stand around in confusion discussing it's evolutionary history.

"rather have" in what sense? as a unit in a Civ game? if so, let me give it some thought.
Homo sum, humani nihil a me alienum puto. -Terence

Give me the liberty to know, to utter, and to argue freely according to conscience, above all liberties. -Milton

That said, I am very happy about the contributions so far, looking forward to judging them on Saturday (submissions are open until Friday 26th).
Civ4-BtS-Mod "Mars, Now!"​
BtS: 18 Civs on a world map - and your choice, which!

So Grimp Monstrosity. You get my reasoning in a limerick:

Though it draws in the apex of techs,
Take a sec to examine its specs.
You'll find (if compliant)
That self-proclaimed "Giant"
Confined to but one single hex.
Homo sum, humani nihil a me alienum puto. -Terence

Give me the liberty to know, to utter, and to argue freely according to conscience, above all liberties. -Milton

A few more hours, and then we'll decide!

The Agitated Apparition! A ghastly land unit that only shows up to enemies when they’re within 1 space (like a submarine) sounds awesome. On an attack that doesn’t kill a unit, the Apparition makes the unit flee one space backwards if possible.
Click to expand...

Aaaaand the deadline is over. We'll be evaluating all the entries and tell you on Monday who are the winners of the 3 keys

We have deliberated about the entries, and have come to a decision. We mostly thought about how the comments also relate to Civ, because that was the question, and then mostly about if it's funny or insightful or not.
So therefore we award a copy of ZOR: Pilgrimage of the Slorfs to @armcie @Buktu and @Gori the Grey , who had without any doubt the best entry.

We also read the entry by @Aiken_Drumn , who was long and well crafted. It was not related to Civ, so it didn't make it into the top 3. But it turns out we do actually have a spare key, which we decided to award to him too.

Congratulations for the winners, and thanks everyone for participating

Oh wow thank you guys :O And also congrats to the other winners!

The obstacle to freedom

Submit your name here in order to be judged by your peers!​

R
[Next Fest Demo] ZOR: Pilgrimage of the Slorfs

Steam Next Fest demos: What to play for a civ-fanatic?

S
A new version of the old cult Russian strategy

Early access: Terra Invicta, a 4X where you have to resist an alien invasion