Could you upload just the .biq file of the new version too, so we don’t have to download the 700mb plus file again?

Chalito said:
Could you upload just the .biq file of the new version too, so we don’t have to download the 700mb plus file again?
Click to expand...

It's possible as long as there have been no graphics changes between versions. I'll attach a link to the newest version of the simple files.

Sid Level playing as Germans with the original version where I have to take out France first. I have the Flintlock patch with no razing, sea intersections and paratrooper movement after landing.

May 1940
In this order, they his is how the invasion went…I captured Amsterdam, captured Brussels, captured Le Havre, captured Paris, captured Nantes, captured Bordeaux, captured Lyon, captured Marseilles, captured Strasbourg and France is gone from Europe!! We’ll they still have a bunch of units, but no cities anymore. Wiped the British force from Dunkirk.
Tunis captured in Africa.

June 1940
All French units have been eliminated from Europe. Algiers captured.
-Big aerial attacks by Brits.

The turns are long, so the game reports will be short. I am not ready at all for Barbarossa to start a year early, so we’ll see how it goes. There are a ton of units and I’m not sure what what I should be building. I picked the Bf __ as my best Bomber and the He 111 as my best Fighter. Lots of aerial attacks from Britain, so I need to defend against that. I might have that in reverse though? The only land unit I recognize is the Panzer, so I’m building that only for the army. I think I have plenty of Infantry to start and looks like I get lots of new units too from improvements!
C

I think I got my months mixed up… anyway

November 1940
Captured Kyiv, lost a lot of units in this battle.

I am completely disorganized right now, all of the individually named units have me confused. Doesn’t help that I’m playing with Resolution = 1 and everything is smaller. I’ve not been using any Arty at all, as they move too slow. Just rolling through with the Panzers. The computer is slowing down the game a bit too.
C

Noticed a ton of Russian units pouring into and around Kharkov, around 60 or 70 units!
My research is taking awfully long! It won’t be another year until I get my first tech!! And I’m running negative Gold.
Smolensk captured! I counter the force in Kharkov with about 45 units of my own. No Arty though because they are just too damn slow to get there.
-Russians have a ton of Arty units and are beating down our advance forces. I think they have around30 of them!!!

January 1941
Launched the attack on Kharkov and it was brutal, as one can imagine with no Artillery support, almost ran out of units. Pretty much sent everything that I could but eventually captured the city and liberated the Ukrainians from the imperialist monsters!!!

I'm going to stop here and replay this one with some more strategy, now that I sort of recognize some of the units. I pretty much just put the German Navy on Sentry as I couldn't be bothered to move a whole other bunch of units. 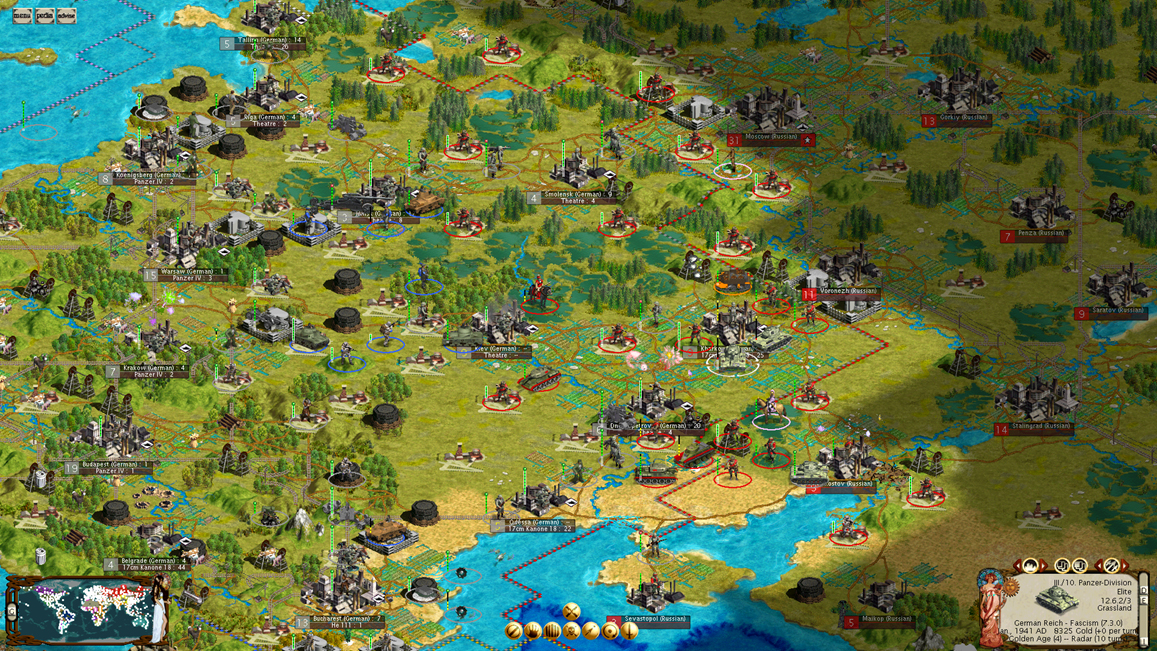