Hello guys, I've managed something pretty cool and decided to share this with the community. A good example of the potency of exploration and micromanagement.

I'm playing a game with Al Falah - Apollo, standard speed, Arid Mu Arae F. These maps have a lot of snowy areas that the AI doesn't explore fast enough usually so if you rush the areas you can catch many Resource Pods. These give a chance for science based on tech researched and the roll is around 25-33% I think.

So for each 3-4 pods you can get a strong boost of science to the tech you're researching. 25% if I am not mistaken so the equivalent of a Steal Science operation, done by special agent spy.

I started in Desert so I went Ecology for fast Vivarium and after the tech finished I was careful enough to switch to Terraforming, in order to receive the highest tech boost. It did not take long and it finished, and the next most expensive tech is of course Planetary Engineering. With the help of a head-start research from a progenitor ruin and another 3 Pods, I finished this one too on t54!. I was already very happy with what I got but the luck continued and I was able to get Geoscaping in this way in turn 62, and finally put another ~ 2 x 880 science into Seismic Induction soon after. Seismic Induction is worthless for anybody except PAC, unfortunately, but on the other hand it is the most expensive tech available so it feels good to choose it for the Pods, however it's possible that Biospheres would help more, in practice. 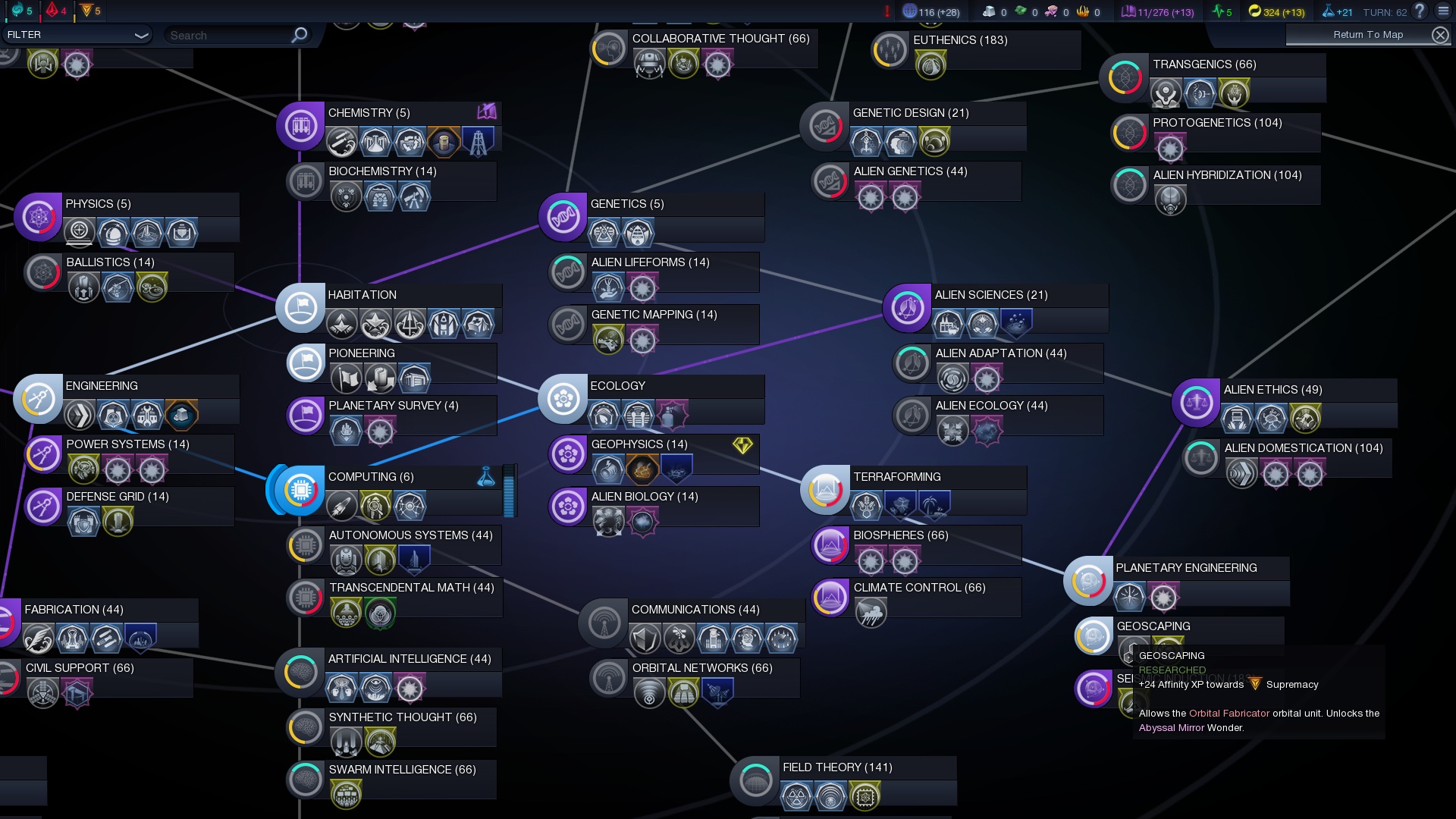 Of course, just having the tech of Geoscaping doesn't really give anything at this point since you won't afford an Orbital Fabricator very soon, normally, and you lack the resources anyway, unless you're the Slavic Federation. But discovering expensive techs this early helps in a number of ways, especially if they give double affinity. You get to the unit upgrades faster and thus can defend better and switch to the offesive.

In my case, it allowed to me to change my strategy mid way. I spawned near Hutama and I was fearing I would run into trouble so I sent my colonists far away in the snow, just to be sure I will be ok if Hutama attacks early. The idea was to be ready to leave my capital to be captured since I usually lack units in the early game in order to get massive affinity from exploration. With quick terraforming and fast Purity 8, losing capital would be irrelevant.

These were my first 3 cities. Unfortunately, nobody took the Trait that allows the agreement for Free Workers. So I decided to tech for a Quick Gene Vault (will be ready t106), which is one of my favorite wonders in Vanilla, but in RT is useless, except if nobody has Free Worker agreement. 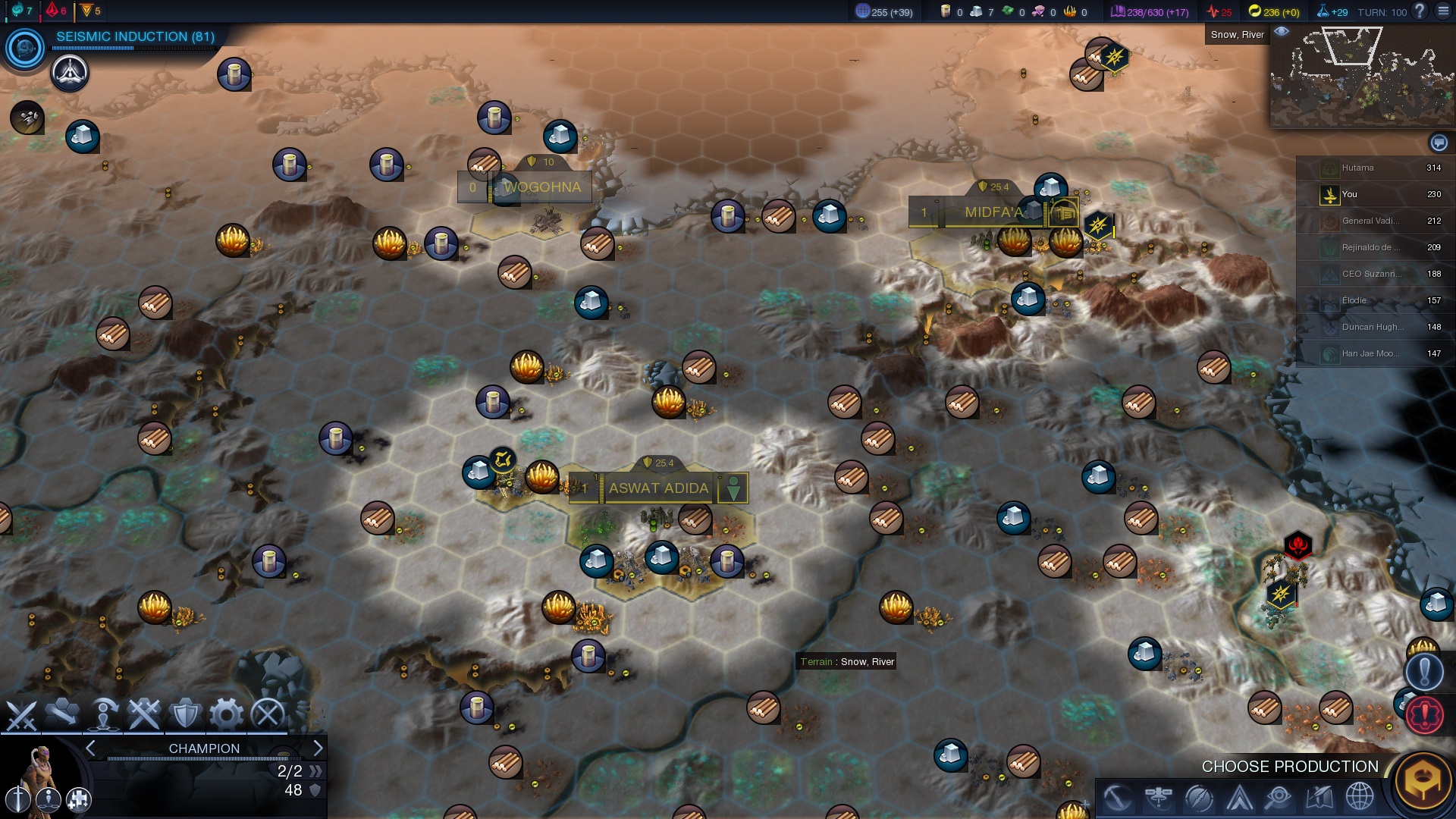 Back in the capital, Hutama attacked as expected around turn 82, but I was exactly on time to save the capital. I had the initial Marine, built 2 more, and bought another 2, one with energy and another one with Diplomatic Capital. 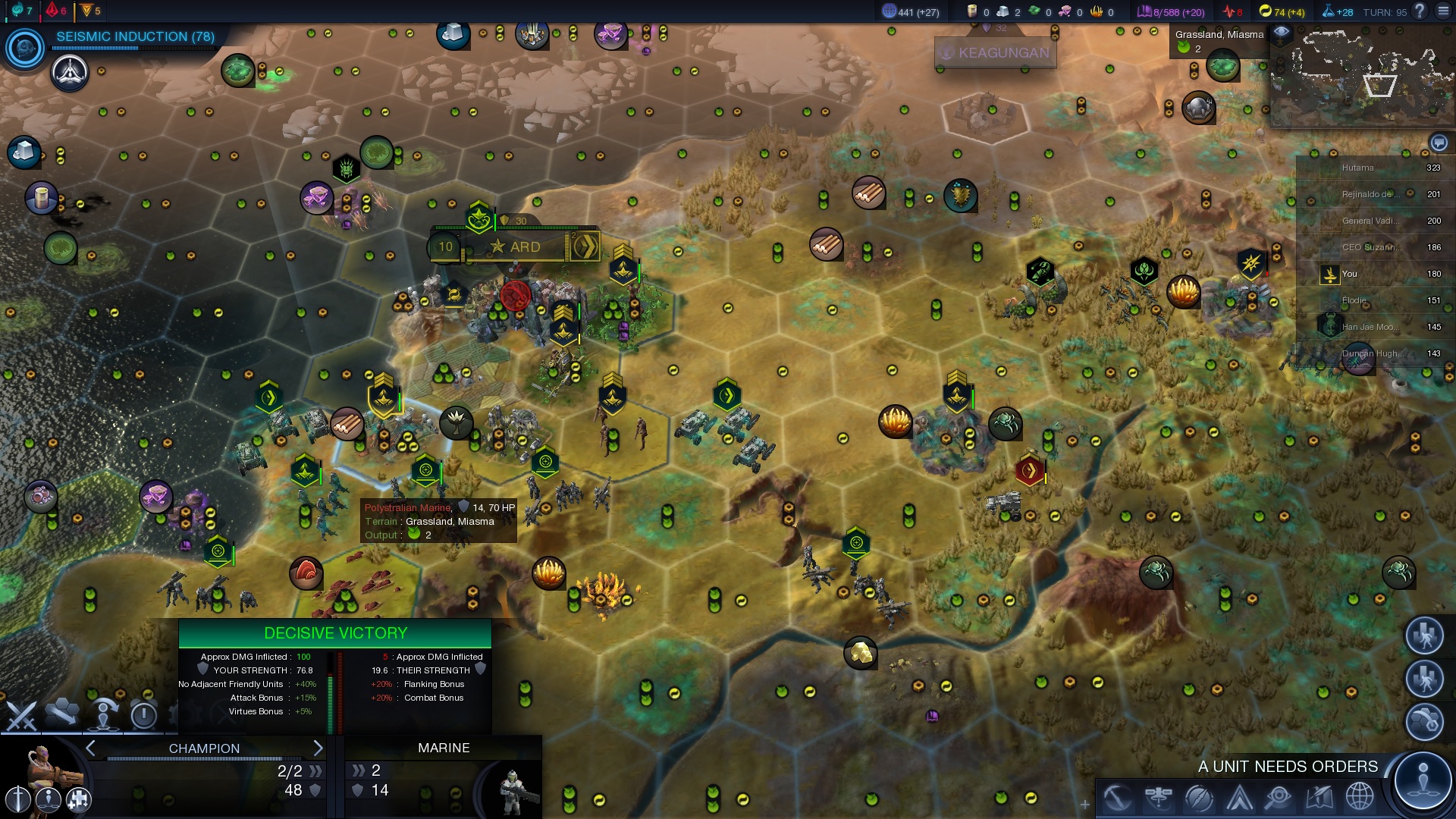 The AI declared war when my 5 Champions were still Marines, and I jumped from 14 to 48 in a matter of a few turns. With the help of all my explorer units being stationed on Alien nests around the map being ready to start attacking aliens at the end of exploration phase, I had a boost of around 6-7 nests on standby (420 science). Most explorers pillaged and suicide-leashed and alien unit in the same turn since they would have died anyway..

On turn 100 I already captured the first city and I am second in score, with the first being Hutama, who is getting crushed. Fun to see Champions obliterating Gunners.

Eidolon/Champion rush is amazing for land starts, especially if you get any quest that involves Soldier type units. In this playthrough, I have even lost the opportunity for my first quest, since I never sent a trade route to Far Base One (who I know is a quest giver if it spawns early near you) That quest used to give 2 free soliders for harmony reward in vanilla, I assume it still does in RT. 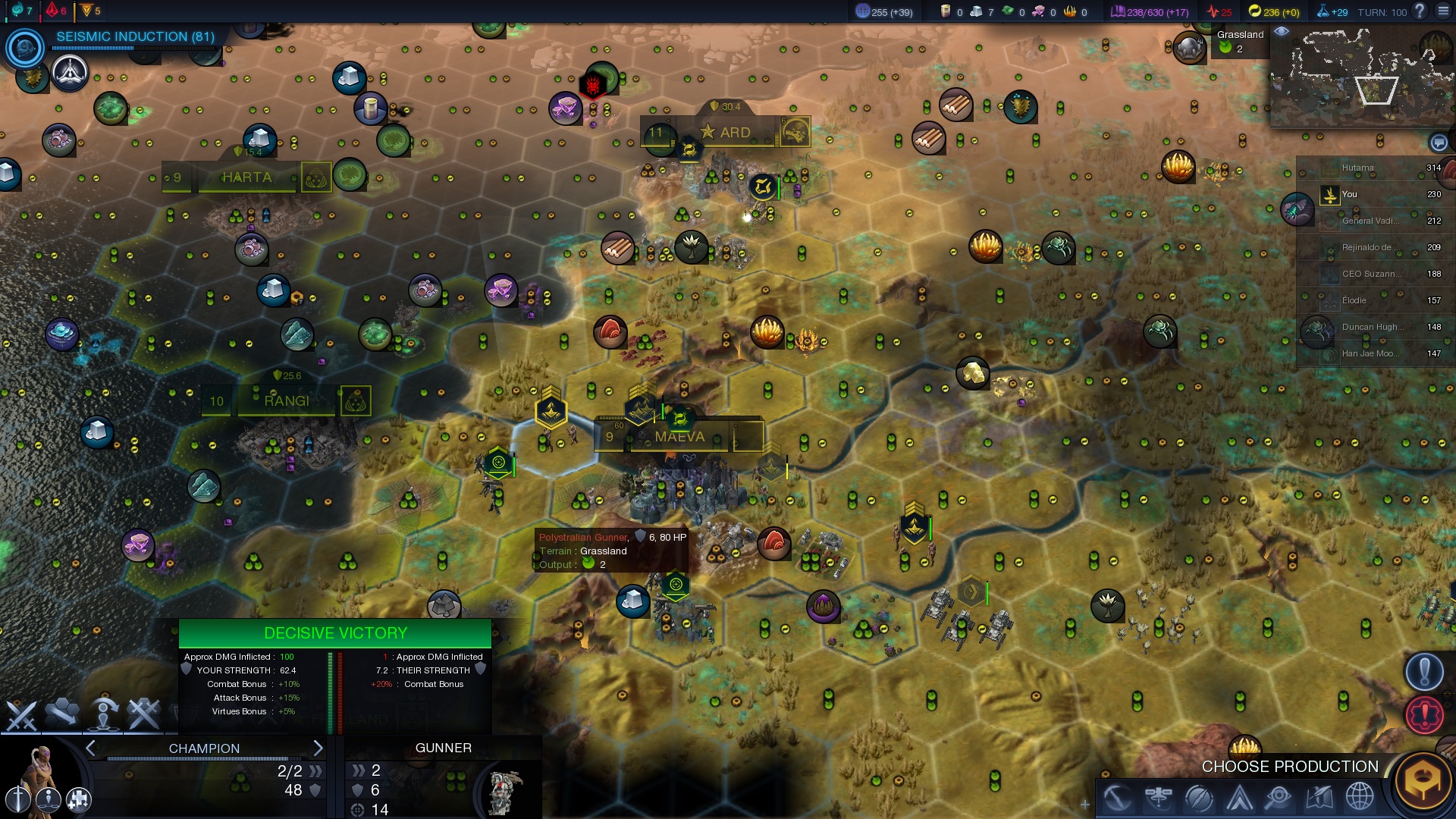 Nobody except Hutama has affinity 5, so this game is already won basically.
You must log in or register to reply here.

[BERT] Some Praise for BERT