Got a question about yield modifiers, specifically for production. I'm playing for a science victory, and in my capital, I've got a military academy with the Integrated Space Cell policy card active (for a 15% increase to production towards space race projects). I have Ruhr Valley, for a 20% increase in production, and I also got Robert Goddard, who used his action to increase space race project production by 20%. I assumed this would mean a +55% modifier (and potentially an 85% modifier had Pingala been the governor, though I chose to stack adjacent factory production with Magnus instead), but when I checked my production numbers, it was only 20%. This leads me to believe that you can only have one modifier, and the game will automatically apply the highest value modifier when multiple modifiers exist in a city. Am I off-base on this?

The +20% from Ruhr is only modifier that would show in the tool tip from what you've listed, but the production modifiers would apply to your total production amount in the city assuming you're building the correct item. For example, when building a space project, the Space Cell will boost your production by 15% but not show in the tool tip where Ruhr, amenities %, Amundsen-Scott, etc. appear. It should adjust your cogs accordingly though.

Highwayman, you're the man!

Based on what you've said, I decided to check the actual cog increase from one turn to the next. Here's my production this turn: 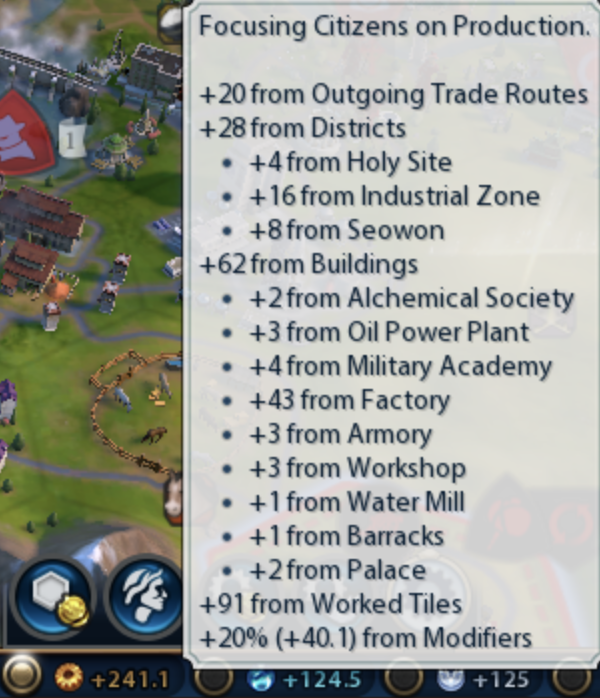 So that's a total increase of 405 cogs, which with a viewable production of 241.1 works out to an increase of nearly 68% (when I was expecting 35% of increase due to space race-specific modifiers). So it makes sense now that modifiers do stack, but the only question in my mind is where did the extra 33% come from?! Either way, I think this answers the original question.

Glad I could help. I wish the tool tip provided a clear view of everything affecting your production, but here we are. There are other production modifiers that could be "hidden" like Pingala's +production boost to space projects, completed the final Future tech, Synthetic Technocracy gov, etc.

Yeah, it just occurred to me that I had some future techs already built up, that accounts for a good bit of that unexplained 33%.
You must log in or register to reply here.