If you are a Game of Thrones fan, you will probably want to play this scenario.

I do not want to make spoilers, so there is no map or minimap in the post, but you know more or less how the world of GOT looksalike.
Please dont spoiler of the scenario posting screenshots on the first page of the thread. / don't spoil the fun of exploring the CIV GOT map
This is all I can show (my save from checking game ver.2.0): 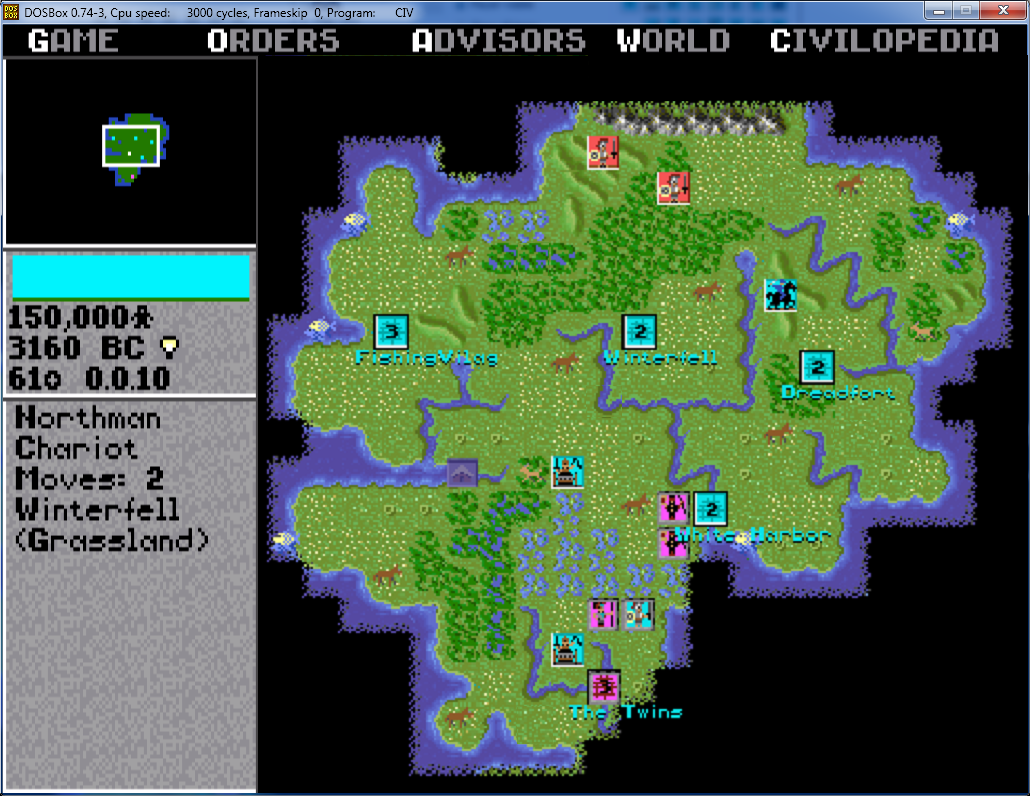 Keep in mind the fact that all these maps on the internet are basically a fantasy about the appearance of the GOT world. The dimensions and, above all shapes of the continents are basically invented.
Therefore, although I tried to reflect the GOT world, but it does not have to agree with what you saw in a picture (but mostly is similar).
My first goal was to create a playable map (i.e. giving the player a chance to build nice, big city) and I think I even went too far in this aspect.
In creating the world, I was based, of course, partly on maps, but also on the description from the website: https://gameofthrones.fandom.com/wiki/Game_of_Thrones_Wiki

The land terrain in the game is very large.
You start with the Stark (Northman) nation in 3980 BC
The enemies are 6+ barbarians.
The game is of course set to the highest difficulty level (emperor),
so I advise you to use the version of the civilization without "bonuses" to dissatisfaction: https://forums.civfanatics.com/threads/civil-disorder-why.638921/page-2
Be mentally ready for a very difficult game from the very beginning! And i think the farther on, the harder it will be.
The scenario is to expand the empire and not to defend predetermined cities (although some cities are already established.
Scenario is on CIV 1 DOS

The game itself, has numerous limitations, so I could not create as many nations or cities as I would like.
If I could, every bigger city / fortress would be built after entering "tribal houses" but it is not possible. So, unfortunately, most cities and locations will be where AI will set them up.


What else could be done and I can't?
Change colour of nation and Create graphics for representatives/leaders of: Stark, Lannister, Martell, Greyjoy, Stannis, Khal Drogo, Daenerys, Tyrell, Slavers masters, President people of free cities, Others.
// I spent more than 40 hours learning the JCivED program(learning from mistakes), accurately reflecting the GOT map, creating playable nations, testing game, checking the balance of power of the nation etc.

is due to @darkpanda for creating a program without which this scenario would not exist.
ps. Soon, he plans to create a second GOT scenario called "Navel of the world". Probably even harder than this.

So good luck and have a nice game. Be strong.

As I mentioned some towns / castles are already established.
It would not be very good if they were destroyed by AI before you reach them, so I update first post on save version 2.1, improved with more balanced nations and bonuses to defense or cities (especially capitals).
I also made corrections to the Westerlos map near Reach and Dorne and North
and I call @Blake00
Last edited: Aug 21, 2022
Game of Thrones scenario CIV1Dos

A Scenario for Civ I? Wooow!

I was addicted to Civ I. But I have re-played a few years back... and found it boring... can't say I would prefer to play that over (for instance) Civ IV.

Woah! I've been waiting for this and wondering what had happened. Sadly your tag didn't work (I think you needed to paste my name in as text only next to the @ symbol) so I didn't see this until now when The_J kindly told me!

I look forward to checking this out and I'll definitely include it in my up and coming Civ1 followup video for the big video series!

Blake00 said:
I look forward to checking this out and I'll definitely include it in my up and coming Civ1 followup video for the big video series!

This is first, easier scenario.
Now for several days I been testing second scenario GOT and I will say that I know where the threats are, so I dealt with them quite quickly but you will probably have a problem with your first game.
Maybe about a week I will post a 2nd scenario with changed gameplay and map.

Unfortunately, I see that although my scenario coincided with time with the series Game of Thrones House of the Dragon, the interest is basically none :-(
Last edited: Sep 7, 2022
Game of Thrones scenario CIV1Dos

Ahh cool.. it'll probably be a month still before I do the video so you've certainly got time if you're working on more!

Scenario 03: Against the Odds