Looking for Feedback on my Mod Selection

Before moving on to Civ VI, I previously played Civ V extensively in the past, including using numerous mods, including Vox Populi.

I now feel played out in Civ VI, and Civ 7 has not been released yet, so I would like to go back to playing Civ V for awhile using the latest version (2.6) of Vox Populi, plus most of the mods that I previously used.

However, much time has passed since I played with the earlier versions of Vox Populi, and I've lost track of which mods are fully compatible with VP and which mods have been incorporated into it.

Therefore, I'm attaching an MS Word file showing the mods that I'm thinking of using with VP version 2.6, and would really appreciate feedback on my proposed mod selection.

Just in case it was because folks were cautious about opening an MS Word file, I am now attaching a safer to open PDF file of my proposed list of mods to use with VP version 2.6.

Just in case it was because folks were cautious about opening an MS Word file, I am now attaching a safer to open PDF file of my proposed list of mods to use with VP version 2.6

Oops, forgot to attach the PDF file a minute ago, so here it is.

Why don't you just paste the text here instead of putting it in a separate file?
S


man, just start a game with 3/4 uc and you will have fun. https://forums.civfanatics.com/threads/3rd-and-4th-unique-components-for-vp-official-thread.631657

others are just cosmetics/outdated compared to that like any 5th component.

Good idea about pasting my list of mods here. It is a very long list, as I used to utilize numerous Civ V mods prior to playing with VP 2.6, but here goes:

CppMaster said:
Why don't you just paste the text here instead of putting it in a separate file?
Click to expand...

Good idea, so will try pasting the list of mods here. It is a long list, though. 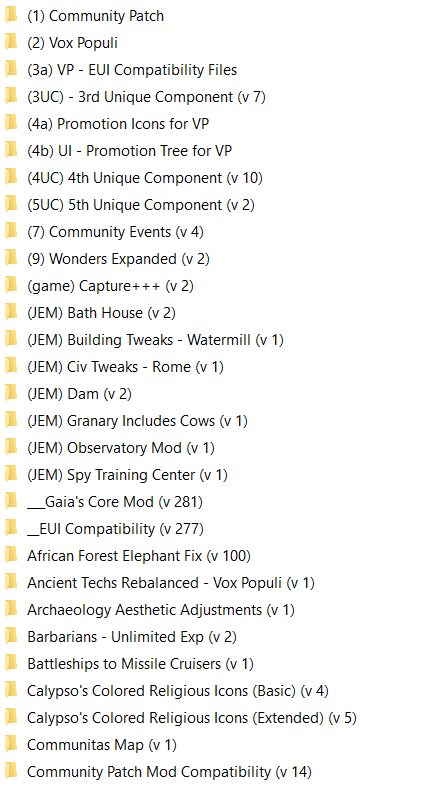 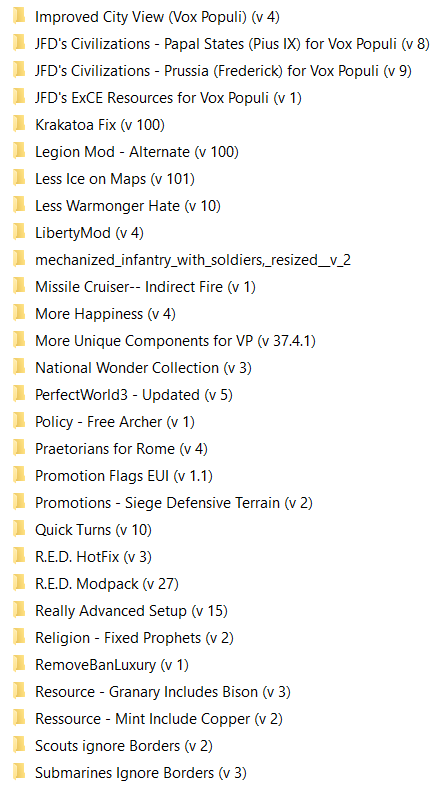 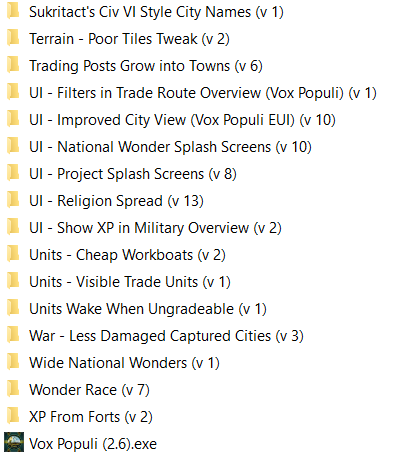 UI mods and 3/4UC are fine. Just make sure to download latest versions.

Okay, based on your advice, I've significantly reduced the number of mods that I will try using alongside Vox Populi, and have checked as well as I can that these mods will be VP compatible.

However, just to make sure I'm not trying to duplicate any existing VP content, can anyone point me to where I can find a list of mods that are already included in the latest version of Vox Populi?

it’s not going to work if you try to play Gaia and VP mods at the same time. You can only have 1 DLL mod active at a time.

I've finally been able to get Vox Populi to work for me using auto installer v2.6, provided that I also first manually install the older EUI version 1.28g. (I tried using more recent versions of EUI, but they would not work for some reason.)

I also slowly added mods one at a time to test if they would work at game setup. Will need to keep my fingers crossed in hopes they won't cause any late game crashes.

While testing mods one at a time, I found some of the mods supposedly VP compatible, like Improved City View, did not work with this latest version of Vox Populi. Oh, well.

At any rate, here are the mods I'm planning to use when starting a new VP game tomorrow, playing as the Romans:

Here's hoping for a good VP gaming experience tomorrow, with a little luck thrown in for good measure.

This is a bit late but you don't need Faster Aircraft Animations anymore, it is built into VP

Thanks for the info about the Faster Aircraft Animations mod being built into VP.

Game Update: I went ahead and played a game as Rome, using the full set of Vox Populi autoinstaller v2.6 plus EUI v1.28g, and had lots of fun, eventually winning my game via domination on a Communitas map.

At the conclusion of that game, however, I decided that I had lost interest in using the full set of VP modules, such as the extra city state diplomacy features, etc.

By using this reduced game set up, I was able to safely add many of the separate Civ V mods that I had wanted to use.

Hi Torvald. May you share the modpack here? In my own modpack, I use less, but similar mods that you use. I have had an issue with the 3rd and 4th unique components for VP where resources that spawn from special civilization buildings (namely the Shoshone buffalo pound, Roman latifundium improvement, and Egypt Nilometer.) would not spawn on the modpack version but work just fine on single player. I am not sure what the issue is and wondered what your process was that was different than mine. I followed the instructions on the Multiplayer Mods Workaround steam page but that is practically it. Perhaps you could let me know if you are having resources appear when you build a buffalo pound and see if it is a modpack issue for everyone or if it is just me.

Per your request, I'm attaching 7zipped copies of the older Community Patch v88 and EUI v1.28g mods that I am currently using in Civ 5.

This basic setup is working well for me, along with about 50 additional mods. (Please note that I am using only the Community Patch part of Vox Populi.)

The only snag I've encountered is that sometimes the game balks at advancing to the next turn. However, I've found this is caused by there being a pending World Events choice waiting for me to click on the exclamation mark icon and inputting my event decision.

It is possible that using just the latest Community Patch v109 and EUI v1.29i might also work while using additional non Vox Populi mods, but I haven't had a chance to test that particular configuration yet.

Here is a list of the Mods I am currently successfully using with Community Patch v88 from an Earlier Vox Populi version, plus the earlier version EUI v1.28g

NOTE: Most of these mods are from the Steam Workshop, although a few are from elsewhere.

(1) Community Patch (v88) = (the later version v109 is also available from VP v2.6) (I have not yet checked what version is in the just released Vox Populi v2.7 Auto Installer package)

Helicopters Can Fly Over Water (v3)

No World Congress Until Globalisation (v1)

What exactly are you using for unique components? It doesn't appear to be Pineapple Dan's version, which as of today, is now V. 83. Also, was wondering if you could post the full modpack so I can evaluate and see if I can find out the issue.

Please note that these 3 mods work okay with using just the older Community Patch v88, plus EUI v2.8g, but they don't seem to work when using the entire set of Vox Populi Auto Installer VP mods.

Earlier today, I tried to upload for you a 7zipped file of all the mods I am currently using, but the Civfanatics website said the 7zipped modpack file was too big.

If you come across any non-VP mods I'm using that you want to use and cannot find elsewhere, let me know which ones you want, and I'll try to upload those for you. (or send me your email address)

Is there a reason you are using those older component mods over the newer version? You can use gofile to upload and send me a temporary link as well. https://gofile.io/welcome is the URL.

Well, as you can see, I was trying to use a lot of extra non-VP mods and was encountering many game glitches when sticking to mod versions that were supposedly VP compatible, so just to play it safe, I reverted back to the older, non-VP unique components mods.

The newer VP-compatible mod from Pineapple Dan might work perfectly well; it's just that I haven't been able to confirm that with along with all those other mods I'm currently using.

I'm not familiar with gofile, but will give it a try in a few minutes.

Okay, I just now uploaded the 7zipped modpack file to https://gofile.io/d/p3Z7M4
Last edited: Oct 2, 2022
You must log in or register to reply here.

B
Help with making a personal mod for myself!