Civilization's 30th Birthday Contest: Give Civ a Present, Get One Back! New Forums for Humankind and Old World 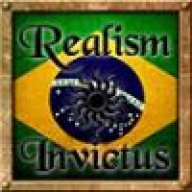 Occupation:
(M.Sc.) in Renewable Energy. Working in the area.