Download
Overview Reviews (5) History Discussion
With the release of the June 2019 patch, the rules of adjacency for the Industrial Zone (IZ) were dramatically modified:
For many players, the loss of the simple "+1

or more!
Navigating these new rules can be a bit difficult, especially if one isn't used to district planning. That is why this guide exists. I have played a lot of games with the new patch getting a feel for the new system, and I've created some handy templates, which allow a player to quickly size up terrain and instantly recognize a good template to place down. The new Map Tacks are a life saver here! 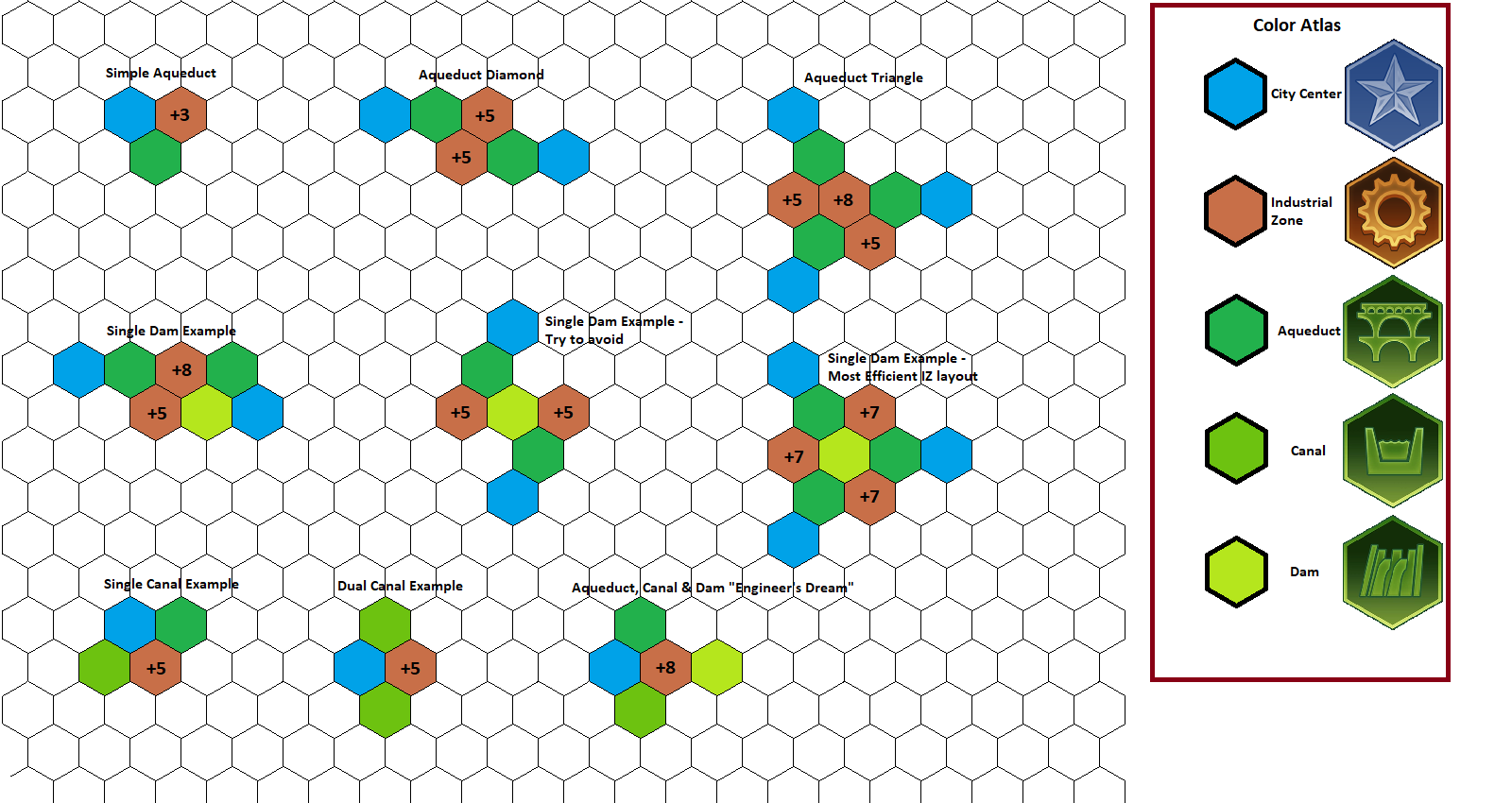 A quick Note about whether this is even a worthwhile exercise:
If you place any of these three "green districts" next an IZ, it will grant at least +2

if you have the craftsmen card, and +8

if you also have a coal plant. Eight production - and that's if it's only next to one IZ. Sometimes you can get them next to two or three - in which case you could be placing an effective 24 production tile. For reference, a plains hill Ruhr Valley mine tile will give 6

. An encampment with all 3 buildings is also worth 8

. Recall that military engineers can rush all these districts and are fairly cheap units, so you can set up a new city in a matter of turns with a handful of them.

So let's go through the nine templates I've shown.
First, we have a simple single Aqueduct. By far the easiest to use of the green districts, Aqueduct+IZ+another district is an automatic +3

. You need not use the city center - perhaps you have Machu Picchu and you want to leverage some Mountains, or there is a very appealing strategic resource. Just don't forget that an Aqueduct really counts for +2.5, since it is a district, so you can milk an extra point by putting a second district next to that IZ. (Adjacency is always rounded down.) Also note that currently the adjacency rounding is done by category - mines, lumbermills, and districts are separate categories, so if you want to improve your IZ, you'll need two mines or lumbermills to get +1, not 1 mine and 1 lumber.

While that's not a bad number, the real power of these districts is combining more than one together. The bread and butter template to try to work in is the next one, the Aqueduct Diamond. This is conceptually similar to an old Hansa tactic with commercial hubs. (If you like Hansas, have I got the guide for you.) This simple design guarantees +5

to those two IZs - an extremely good result that works along most rivers.

If the river cooperates by making a bend, or perhaps two rivers join, then you can do one better - you can make an Aqueduct Triangle. This is an extremely potent shape. In this example I've placed the IZs in an arc. But this isn't always the best way to put them. (More on that later.) Consider, for example, if you moved that center IZ out to form a complete ring of AQ and IZ, and then plopped a government plaza in the middle. Resource locations may also play a role. It's not as uncommon as you might think to find river bends that support this.

Next I give two simple examples of having a Dam involved. I want to make an important point: because a major bonus district is functionally the same as any other, the best layout in any situation will achieve two related things:
When you have two IZs next to each other, there are two tiles that touch both of them. This means that a major bonus district placed in either of those spots is really giving double!
However, when the IZs are one tile apart, as int he example I suggest avoiding where possible, there's only one tile that touches both of them. Sometimes stuff like resources get in the way, but it's an important point.
The best case scenario for our floodplain is if we can Combine an aqueduct triangle with a dam in the center. Three +7

IZs! (If you filled in the districts around them, they'd go to +9

Aqueducts and Dams are both usually based around rivers, although mountains are helpful too. But canals need water tiles. How can we work those in? Well, a simple way to do it is to set up a situation where you have a city one tile from the coast are combine an aqueduct going to a water source with a canal to the sea. That will set up an easy +5

.
What if you can't use an aqueduct? One equally effective trick is to find some straight coastline and plop a city one tile inland. Then place two canals tot he sea, and put your IZ in the middle. Another easy +5

. This setup also gives an easy spot to make a Venetian arsenal.

Lastly, I'll acknowledge that some people don't really like placing cities close together to combine aqueducts like this. However, there are many cases where you can find floodplains that lead to the sea. Looking at the last template, this often sets up a possibility to put down an aqueduct (touching the river) a canal (city to sea) and a dam (on the floodplains) all around an IZ, for +8

. That's incredibly strong and only requires one city!

A Quick Remark on Dam placement
Sometimes it seems like you can't place a dam on a floodplain and you don't know why. The reason is that dams must be on a floodplain tile that has a river on two adjacent edges. This means the inside of a bend is okay, but the outside isn't.

Remarks on civs with good IZ synergy
Who can best take advantage of these new rules?
There are several civs that really take advantage of this new system. Shoutouts to Rome (cheap, superior aqueducts) and China (they can place canals at masonry.) Khmer and Inca like Aqueducts too, but they also want to put their farms near them - tension!

England does well here. Their extremely effective military engineers (twice the charges at half the cost) are amazing for rushing these green districts. The coal and iron start bias helps them find strategic resource mines for extra adjacency. And their +4 production factory is a nice touch when they are making IZs anyways.

Because Aqueducts and dams are very often on rivers, the Dutch Grote Rivieren ability to pick up another +2 on IZ/Campus/Theatre Square for being on rivers is a natural combo.

Japan's Meiji Restoration really shines. For them, a +2 district like an Aqueduct now grants +3. Filling in the space around IZs with other districts grants a lot of extra adjacency, both to the IZ and the other districts. They also have the Electronics Factory which gives extra

culture They have some of the best IZs in the game now, and can currently build the best single IZs, at +18

. I'd consider them to be extremely powerful while also being straightforward and flexible.

Germany's Hansa also got the green district bonuses carried over, but because of it's unique rules, I'd suggest looking at my Hansa Guide. Safe to say they are extremely strong right now. They can turn any Aqueduct Triangle into a +15

Hansa if they want to, and they can get huge numbers without relying on having good rivers.
Reactions: PiR, the_sun, Liberty Prime and 12 others