Need some advice or tips when analysing start locations. I started this game as Teddy on a fractal map, legendary start with abundant resources. Could have attached the game file, but unfortunately I started it with a bunch of mods which break the save if I try to disable them. Anyways, my analysis is thus...:

The way I see it, there are two main places I can start. Either settle on the spot or move NW to the desert hills tile. Settling immediately gives the advantage of having a plains hills, so I get an extra production; plus, I also get +1 culture and +1 gold from the wonder, freeing up my citizen to either work the Deer for extra production/culture or the Rice for growth, whereas moving to the desert hills means I'll have to pick between working the Rice or the plains hills just to get the benefits of the wonder (or otherwise wait for my pop to go up). And if I want more culture, the best tile being the Deer, I'll have to buy its tile/wait for border growth because it will be in the second ring. Also, it is more advantageous to settle here because then the silk will fall to within the three-tile workable radius of the city.

On the other hand, settling on the spot means I lose the extra housing from fresh water which is REALLY important in the early game! My city also effectively loses one tile from the 'inner' ring and two tiles from the middle ring, the tiles occupied by the wonder itself. The silk is also really far such that it would be early midgame by the time I can grab it, so I may as well just place another city near it.

The fish and crabs are all reachable from both locations so I don't think it matters much when pertaining to them.

What do you guys think? 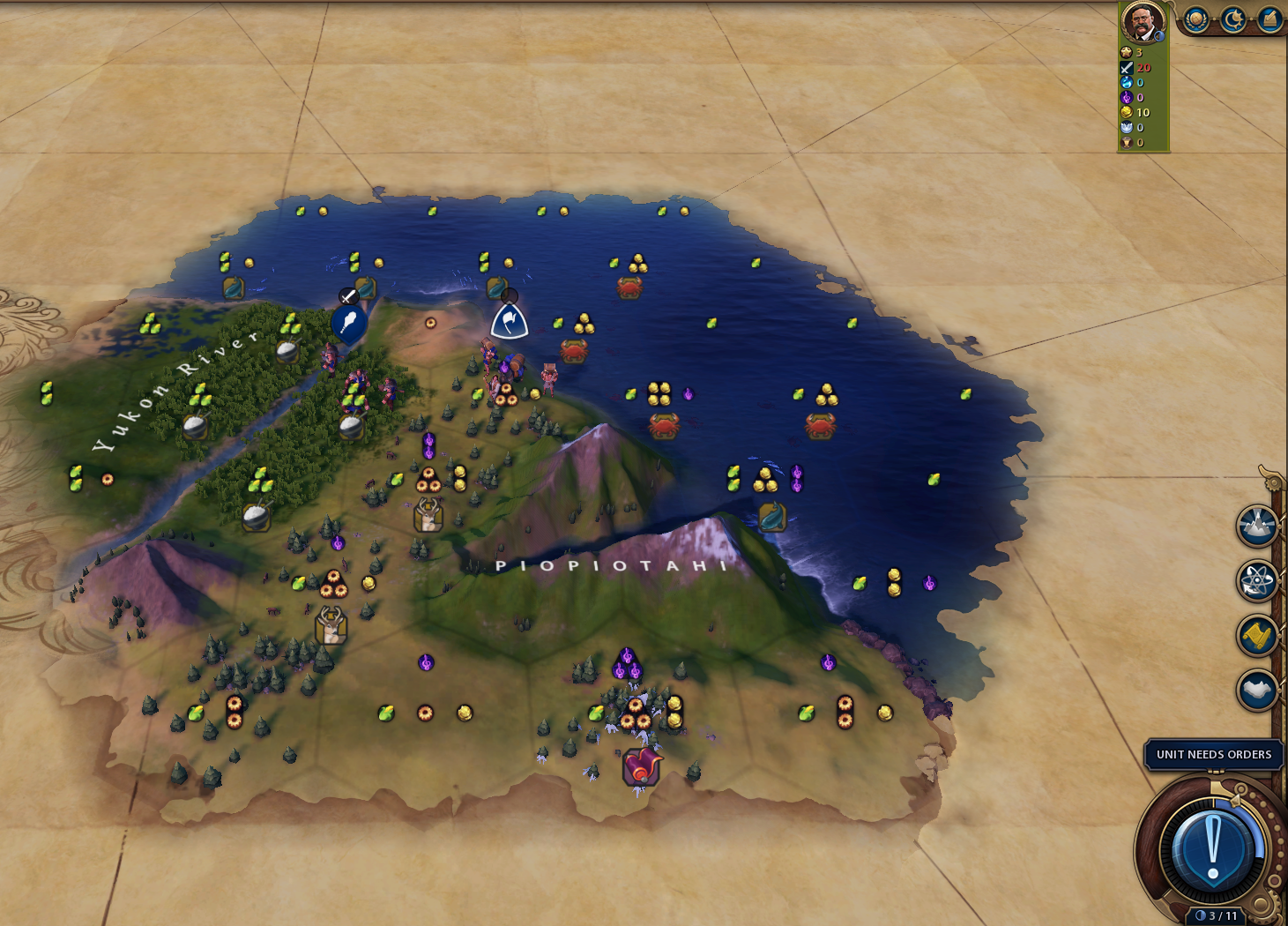 I don't have experience with legendary starts, but I'd settle in place, work the deer for the fast culture/border growth. At some point you need to switch to working the rice to grow to size 2, but 2 food vs 3 production/2 gold/2 culture is a pretty massive gap.

I'd settle on the closest rice. Normally plains hill is what you want, but since you have 4 rice here I wouldn't want to lose the food that'd come from a water mill
B

I'd settle in place and work the deer. Too much early production and culture to pass up. You could later on put a harbor on the northeast crab and build the Mausoleum on the desert hill. The fishing boat pantheon could give you 7 production from all those sea resources too. The real answer though is yes, settling anywhere there would work.

wants his subs under ice!

Before you settle, move those warriors so you can see what is to the west. There could be something even better in the fow.

edit: but I agree, settling on the rice seems like a good idea.
M

I'd settle on the rice. More growth early means you grow pop quicker and thus work more tiles. You'll be able to work culture tiles soon enough anyway. Pop drives everything at the beginning. The faster you grow, the sooner you will be able to work both tiles and then you won't have to choose.
Last edited: Dec 22, 2019
2016 15" Retina MacBook Pro, 2.9 GHz quad-core i7 6920HQ, 16 GB RAM, 4 GB AMD Radeon Pro 460, MacOS Big Sur beta 11.0

oakdragon said:
I'd settle on the rice. More growth early means you get grow pop quicker and thus work more tiles. You'll be able to work culture tiles soon enough anyway. Pop drives everything at the beginning. The faster you grow, the sooner you will be able to work both tiles and then you won't have to choose.
Click to expand...

And it gives you a better 'base' on which to build Settlers without crippling your city.
S

This video is a little outdated as it was made pre-Gathering Storm and so doesn't account for things like volcanoes and the potential for rivers to flood, etc. However, there's still plenty of broad-spectrum advice that may fill a hole or two in your ability to analyse,

I am with @iammaxhailme on this for a few reasons.

Moving away from the wonder allows more room for you to build districts
You have an awesome rice next to you for a massive city fast and it will churn out settlers and still grow
Fresh water
You 3 +3 production tiles are all +1 food and need to be countered with 3 good rice tiles.
The culture tiles on the other side of the wonder are really for another city.
You can settle in place if you really want a harbour with great pluses but it does seem a waste, the desert hill would be a better spot if you want to do that
The first 3 reasons above are the important ones
Experience , Loyalty , Chop Example & Tables , Levy units , ZOC , flanking & Support ,LOS, Rock Bands, City Combat , District Discounts , War Weariness

I didn't even seriously consider the rice! Intriguing.

However, I have question. Is the rice pop thing better in the long run than having the extra production?

I also have an issue where I cannot see myself giving up on a +5 Harbor! But is it more/less efficient to do so?

Given this is a fractal map with a lot of water, I was thinking getting myself some early ships... factoring that into the equation, does it change your conclusion?

Pure24 said:
I cannot see myself giving up on a +5 Harbor!
Click to expand...

If you place the plaza on the desert hill it is a +7 harbour.
Do not underestimate food, especially in a city where you are making settlers.
It is great to have had a +7 harbour (I have had a +9, a +10 is possible) but at the end of the day it does not beat a capital city with a big pop churning out settlers and culture. It is so great, even a temple of Artemis is possible and would just OTT the city big time.
Pingala from the start and just farm the 3 rice for craftsmanship and that pop boost.
Shame you do not have the save vanilla, it would have been nice to try.
Last edited: Dec 22, 2019
Experience , Loyalty , Chop Example & Tables , Levy units , ZOC , flanking & Support ,LOS, Rock Bands, City Combat , District Discounts , War Weariness
L

I'd settle on the desert. Work the rice until you have spare pop to work the deer.

Eventually harvest the fish and rice at the river mouth to set up a harbor/commerce/city triangle.

Yeah settle on the rice and that's a second-level Magnus city churning out settlers to scarf up the rest of that delicious terrain.

I'd be very much tempted to settle on that desert hill, eventually chop the closest crab and place a +5 harbour. God of the Sea pantheon. Probably start with a monument (gasp!, and production focus first) for even faster border growth, then relocate on food, later chop a rice or two and that marsh already with Magnus for faster pops to work those sweet tiles, a number of which will still have to be bought (cash from Magnus chopped crab would come in handy here).

I'm not saying this would be as efficient as settling more inland, but I really like coastal cities

It would be interesting to experiment different openings, a pity that the game is so modded as to break the save. But maybe we could we get the same starting position, if you posted the map seed and settings - map type (I see fractal), size, game speed, number of civs and CS, maybe also disaster and difficulty settings.
I've got a cloud empire and a planet, and I'm a

Is this your first legendary game?

Let me know if Legendary Starts make it harder or easier for the player. I always play Sparse because I assume it makes it harder, but lately I've been thinking, especially seeing how the AI isn't very effective at trading uniques, that Legendary might actually make the game harder by making it easier for the AI.
---

I can't really add much on top of what other people have said other than all those resources with improvements on them add +0.5 housing each and I hate to chop resources. So I'd rather go on the desert hill. That will get you +2 Food on that tile because that's the minimum. I'd then chop the fish in front of the desert hill to build a Harbour.

The desert hill also gives you access to more coast without resources. There could be oil in them, and some stuff requires coast tiles, like the Offshore Wind Farm.
My Mods:
Age of Capital
Silk and Spice: Trade Route Rework

Any other city and that desert hill would be an option for me, but for standard advice it’s all about getting settlers out thick and fast for me. Because it is the capital and I’d be getting to ancestral hall damn fast with that start your whole game would skyrocket making the best use of it for settlers.
Experience , Loyalty , Chop Example & Tables , Levy units , ZOC , flanking & Support ,LOS, Rock Bands, City Combat , District Discounts , War Weariness

In order to take profit of all the goody tiles in a passable timely manner, you need two cities. And that is where the problem lies: the secret south.
What if (in an extreme case) down there are only flat desert and resourceless coast / ocean tiles?!

The second city would have to go between silk & deer and get its pop-growing food from the fish next to the wonder and the southern rices. So playing save the capital goes on the desert with a classical fresh water & sailing boost start.

I dislike selling clueless AIplayers unneeded amenities for lots of gold without having to research the necessary tech, produce a builder & use a builder charge, btw.

MrRadar said:
But maybe we could we get the same starting position, if you posted the map seed and settings - map type (I see fractal), size, game speed, number of civs and CS, maybe also disaster and difficulty settings.
Click to expand...

Note also that I didn't pick Teddy for myself, I let the game pick by randomising the Civ. So maybe it might not work... I'll test it without mods
You must log in or register to reply here.

B
Settling on a luxury