Barbarian spawns: what's wrong and how they can be improved

If you have ever had games where you feel like there just aren't any barbarians spawning, especially on higher difficulties, it isn't just you!
I've had several games in a row with just no barbarians so I decided to investigate by seeing the spawn distribution via visualizations, color coded as follows:
With default settings, the album collecting the full set of visualizations is at https://imgur.com/a/ODzVrFD , but for this post will just include the first game as a sample: 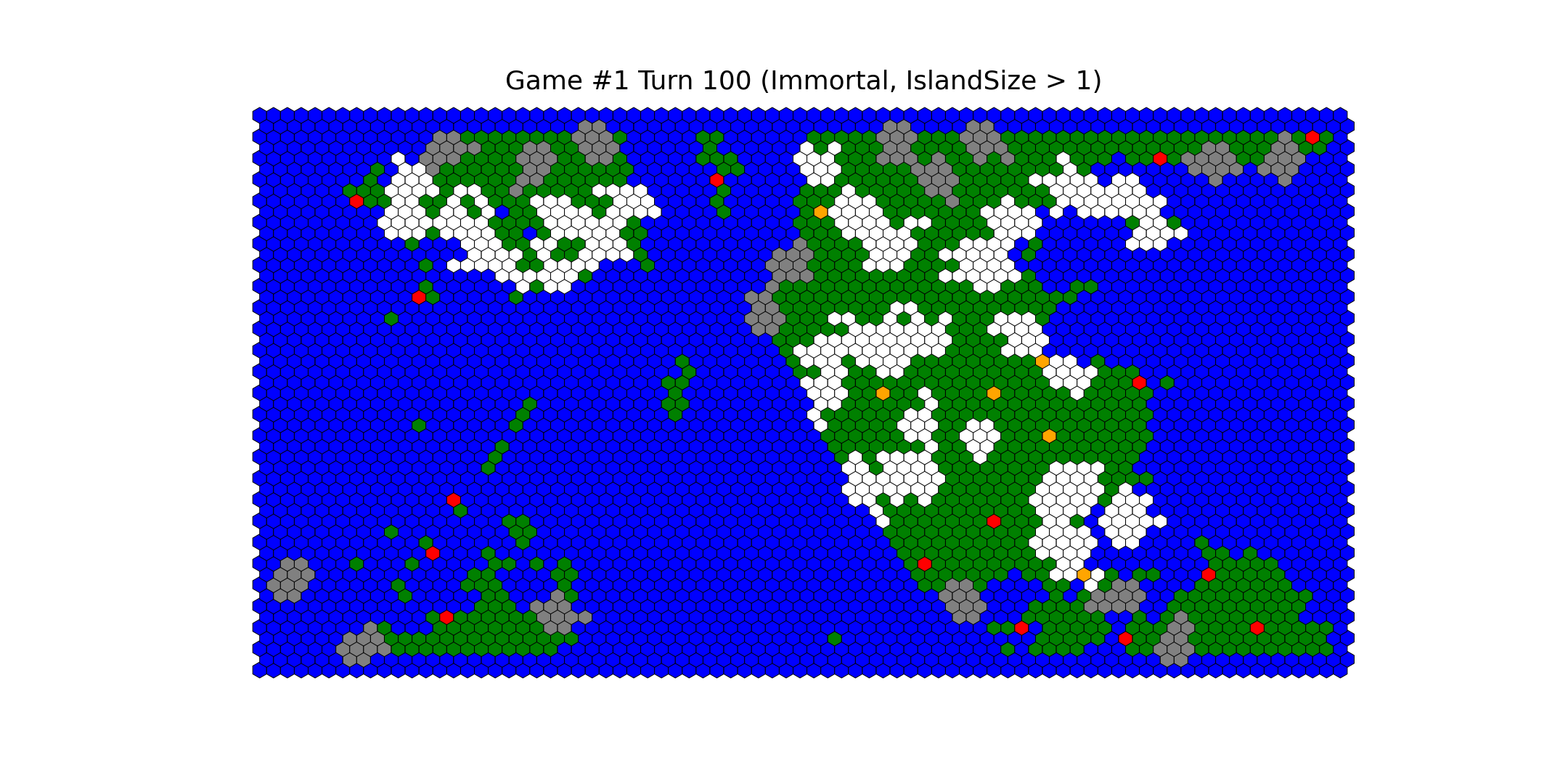 After some discussion on the discord and analysis of the turn 100 maps, I've come to the following 2 conclusions:
Because I wanted to acquire lots of culture and science when I went authority instead of finding zero barbarians, I decided to try to fix this problem. My first attempt was tackling problem #1 by removing the "line of sight blocks spawns" restriction. While there were more barb camps for sure with this approach, not having a way to stop your trade routes from getting sniped was kind of anti-fun in my playtest.

My second approach tackled problem #2 instead: the game by default when deciding which tiles camps can spawn on excluded islands of size 1. Increasing this value to 7 forces those spawns off of small islands and onto continents instead, increasing the probability they will spawn closer to a player. It's definitely not perfect and when the map rolls with few islands not much changes from the default behavior, but I think it's a step in the right direction. Cherry picking my favorite result from the new run: 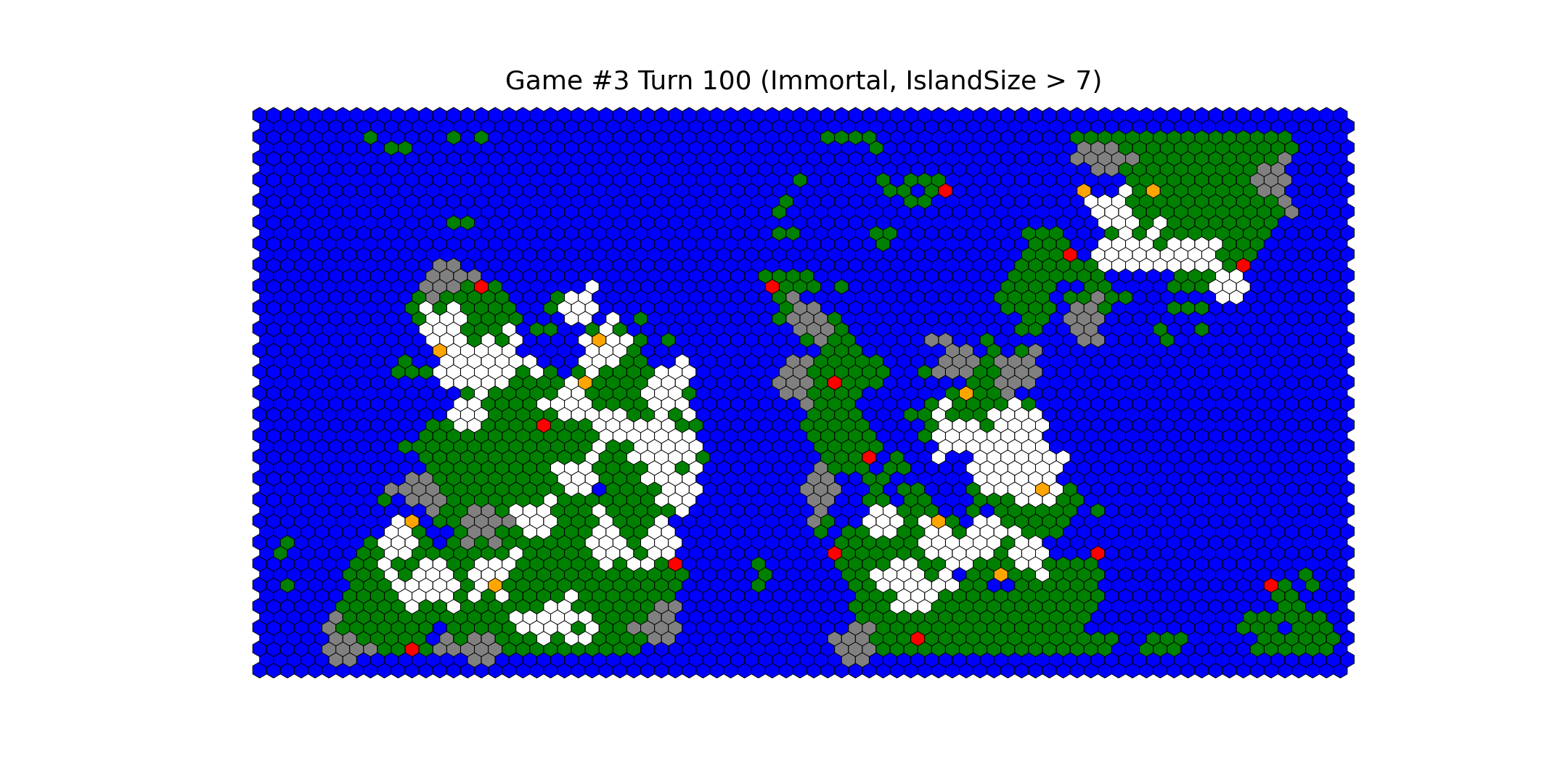 I think shows a very nice distribution with all areas of the map having about equal access to barbs. The full set of results can be found here: https://imgur.com/a/ShGFp8w , and while again it's not perfect there are far fewer areas with no barb activity than the first run.

I'm on my second game now with islandSize>7 and it feels like barbarian spawns are very consistent up until turn ~150, been having a lot more fun personally with the authority start!
I've also made it configurable via config file, any other sizes you would like to see results from? Anyone think it's worth a congress proposal to bump the value from 1->7? Thoughts in general?
I

how about increasing the camp density instead?

how about increasing the camp density instead?
Click to expand...

something easier to keep continent density consistent and near performance-free to do instead would be to not count camps on islands of size <= towards the cap, that might work too?
Last edited: Oct 7, 2022
B

I also like pirate islands, but I also like seeing barbs (whether I take Authority or not) - would it be possible to have the island restriction removed after a certain turn count? Or even better, deprioritise islands in such a way that they can spawn there, but much prefer locations on larger landmasses, so they'll tend to spawn there early game until vision restricts them, then naturally spread to smaller islands as the larger landmasses get settled.

If those are possible, anyway
B

I think island size >4 would be the best scenario, as well as an increase in density, say 25% or higher for spawn rate.

Is it possible to make barbarian units barbarian camps? Unchecked would spread like a plague

I'd also like to see tiny islands being excluded (from spawning or from counting towards the limit) - anything >3 island size should be ok for a first test.

We could also remove the cap?

Yeah I agree on just removing the cap instead. Why's there one to begin with? They're already limited by player sight.
Still using the old unbalanced Communitas map? Try Communitu_79a instead - specially balanced for VP, has more options, and continues to receive updates!
Misc Tweaks for VP is here! Try the (allegedly) better balanced version of VP with this package!
S

azum4roll said:
Yeah I agree on just removing the cap instead. Why's there one to begin with? They're already limited by player sight.
Click to expand...

What would happen on a Terra type game with no cap? Since the second continent would be untouched by sight for a long time, would it just be literally swimming in barbs?
A

Stalker0 said:
What would happen on a Terra type game with no cap? Since the second continent would be untouched by sight for a long time, would it just be literally swimming in barbs?
Click to expand...

I think that would be perfect!!

There would still be some sort of limit on how close the barb camps can be to each other.

It doesn't have to be, though

It looks like if it's not the first turn, then only a single barbarian camp has a 50% chance to spawn each turn.

I don't see anything related to a hard cap.

Another vote for Pirate Islands!
The obstacle to freedom

While I rarely admit when I'm wrong, I'll question your understanding of my original argument every time.

Abaddon, are you absolutely sure you are not just tripping on some bad shrooms?

"I Support the Right to Arm Bears"​
Om traktorn stjälper, håll fast i ratten, hoppa ej!
You must log in or register to reply here.

B
Why not to take Authority 1 always?
2

R
(2-13c) Counterproposal: Give players Galleys and make them weaker

M
(3-13b) Counterproposal: Swap some Militarism and Honor bonuses