I will document my attempt playing it in sessions of 10 turns and I am also sharing the savefile.

these will be the settings:

- Chungsu - I believe they are the best faction overall.
- Colonists: Engineers: I normally like Artists but for NSA and Chungsu this is also good (faster boats)
- Spacecraft: Supply Module: I never used this, I think it is too luck-dependent. However I decided to take my chances since the early game pods might give some artifact with high production to kickstart the game.
- Cargo: I normally don't take Laboratory but I hope to be able to kickstart production with a fast Trade Depot
and to complete the exploration quest for a free Patrol Boat as fast as possible. 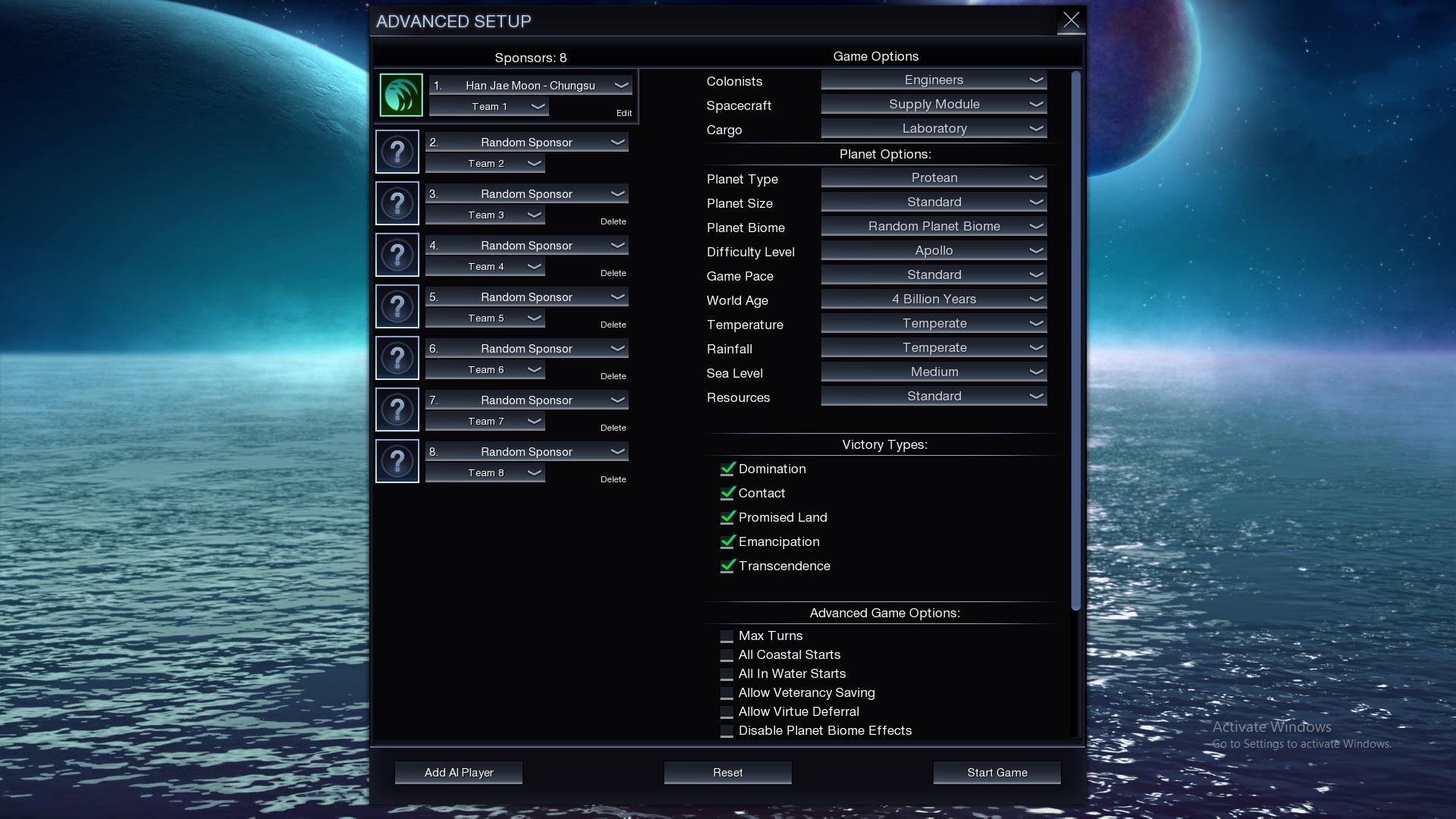 This is the start I rolled. A bad start, unfortunately. I can only hope to have at least 1 titanium and be lucky with exploration otherwise I am not confident to get under 100 with these tiles in my capital. 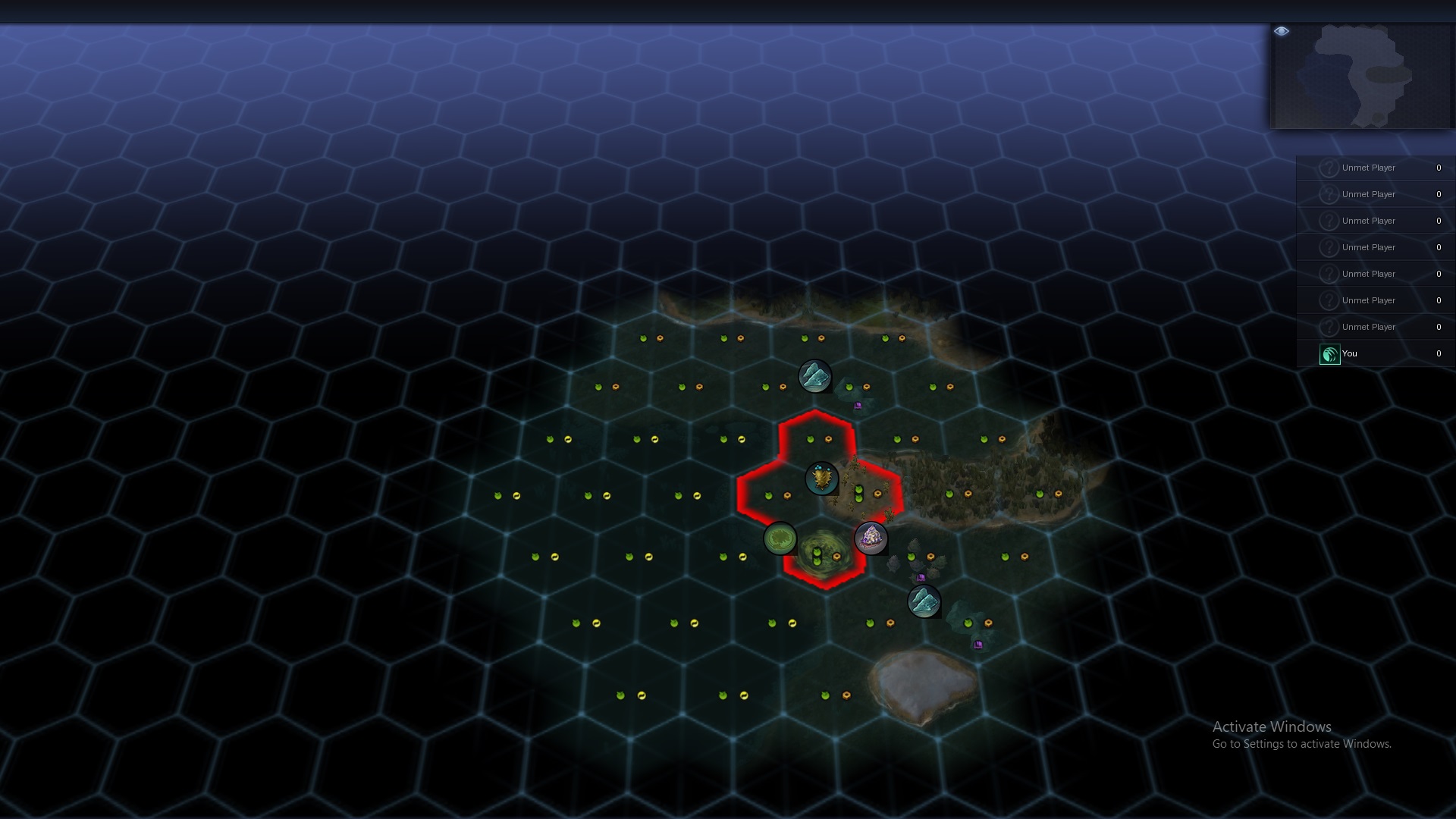 0: First Pod gave 40 energy only. I was tempted to build Old Earth Relic in 5 turns but I will go with Patrol boat in 6. Explorers will be a problem in this game, I don't know when I'll find the time to build them. I choose propaganda as my National Security Project.

1: I see that my neighbour is on the water so it can only be the NSA. It can potentially turn ugly for me. I will have to do everything right.
My explorer finds a pod with a Pristine Thoughtful Chess Set and 20 culture. This is simply great because I will use it right away and get a huge amount of culture considering it's only turn 1. Virtues: 3 prosperity virtues for Free Colonist!

2: Colonist takes the other starting Pod for another 40 gold. Sadly, Supply Module turned out to be very unlucky. I will not take this seeding option again very soon.

3: I am using my colonist to scout for a bit. I will have to settle somewhere if I encounter rippers.

4: I have moved my colonist near an Alien Nest. I am thinking of settling near it. My explorer finds the NSA. I can start doing operations with my spy there. They have a colonist which I will try to capture if I have the opportunity to do so. I switch my National Security Project to Homeland security.

5: The exploration quest to found an outpost sadly does not recognize my colonist as being valid for the quest so I will not get the bonus patrol boat I was hoping for but I will still produce another colonist soon enough.
I have put the outpost near the alien nest.

6: The first patrol boat is ready and I send it towards the NSA to scout them more. Building another one.
Explorer gets a 60 energy Pod. A bit disappointing so far.

10: Alien Remains marvel has been found by somebody. New virtue: Might Adaptive tactics. I will need all the army power for this game, I will remain in might for the rest of the game most probably.
Explorer finds an artifact and a Solar collector in a Pod.

Evaluation: The game feels about average so far. I have an exposed location and I should attack before I am attacked. On the bright side, I might get Friendly status with aliens in this game and they might be useful for defense.
Having NSA as a neighbour is maybe better than having them be far away, provided I take them out early. 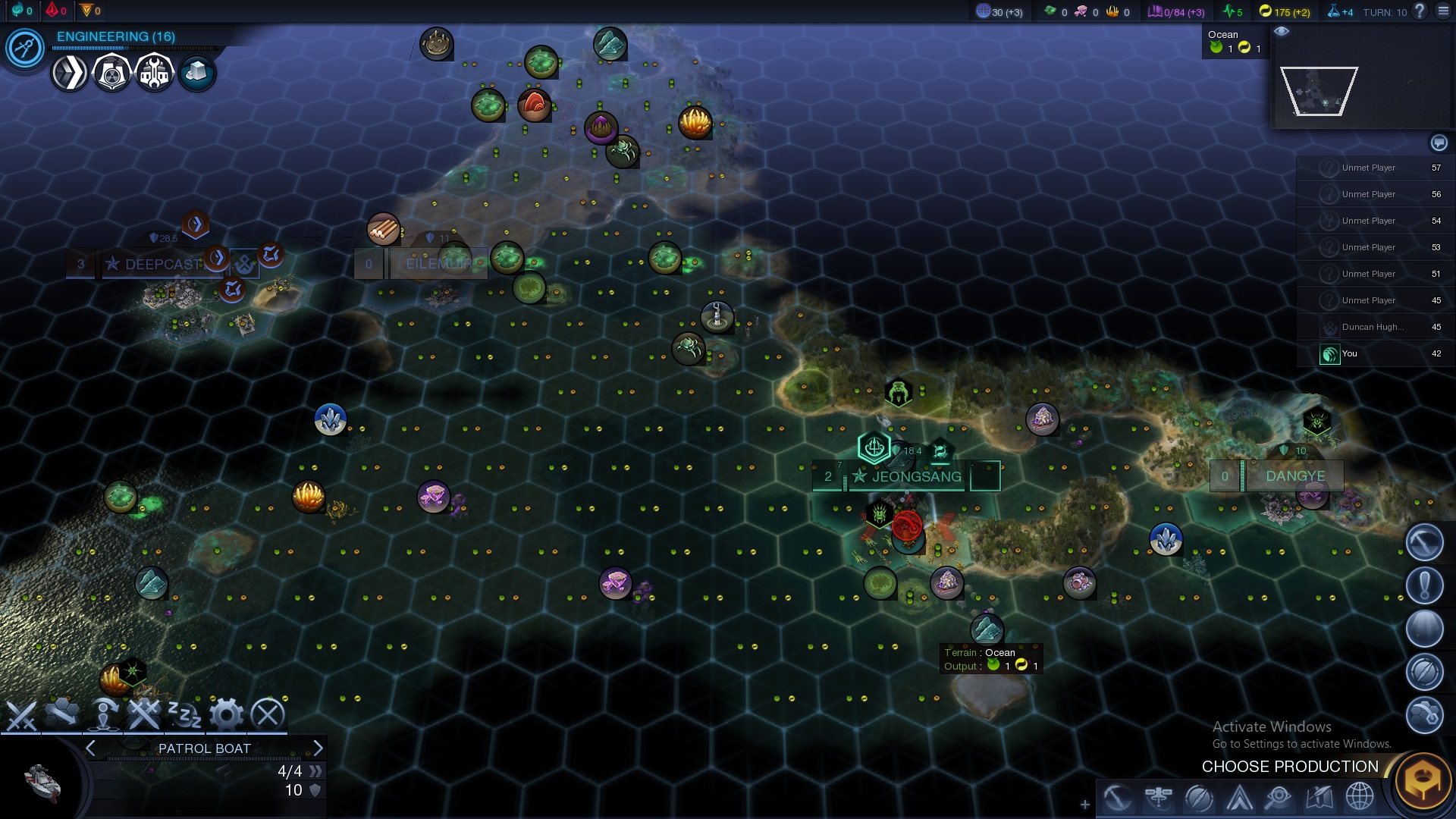 I have now got to turn 40. Here are the summaries recorded for each 10-turn sessions.

11: 60 energy Pod. I make contact with ARC. It is a good thing that they are in the game even though I doubt I will be able to use their agreement.

14. Spy finishes operation and Engineering is now ready. There is no titanium in range, unfortunately.
Researching Chemistry.

15. I find a battered artifact and some energy in a Pod. I make contact with Franco-Iberia. It is good that they are in the game.

18. Second city is founded. I am producing a trade depot there.

20. A pod gives a Solar collector and a battered artifact. I could make a warp spire but it would be useless.

Evaluation: It's still early to say but I am starting to feel the unluck with the Supply Module gamble.

26. Contact with Al Falah. Buy a colonist. A pod gives only 40 energy.

27. I put 95 science into Computing via a Science pod and find a worn artifact.

28. Chemistry is now researched. I find a Pristine artifact and 95 science goes into Computing. +25 culture from another Pod.

29. +20 culture from a Pod. New virtue: I take the free prosperity Worker, bad of a decision as it is. Should have taken it earlier but there seemed to little things to improve.

Evaluation: The plan has not worked very well so far. It seems highly unlikely to win under turn 120 now. Some capitals are not on the coast and exploration has not brought many good things. Need to take out the NSA quickly.

31. Explorer gets 95 science into Computing. I found an outpost near the 2 titanium tiles. NSA warns me that they dislike that. I received a Patrol Boat. Palatine (4 culture) has been founded near my area.

32. I receive "Operative Extraction" mission in the capital of Al Falah. +25 culture Pod. I bought a tile with a Shell resource to gain some more culture.

38. +95 science goes into Computing. 1 turn until Computing! I switch to Biochemistry or else since this would give me 1 affinity in Supremacy.

39. A Kraken appears near the NSA zone. Maybe it can help me take the NSA out? I have the progenitor device on 1 turn to be finished, awaiting for more supply and more Patrol Boats.

40. 50 energy Pod. The Kraken killed a Gunboat from ARC. That's both funny and helpful. Aliens should be friendly to me in about 20 turns.

Evaluation: The NSA is still low in affinity so I am hopeful to conquer them soon. With them gone, the rest should be easy. 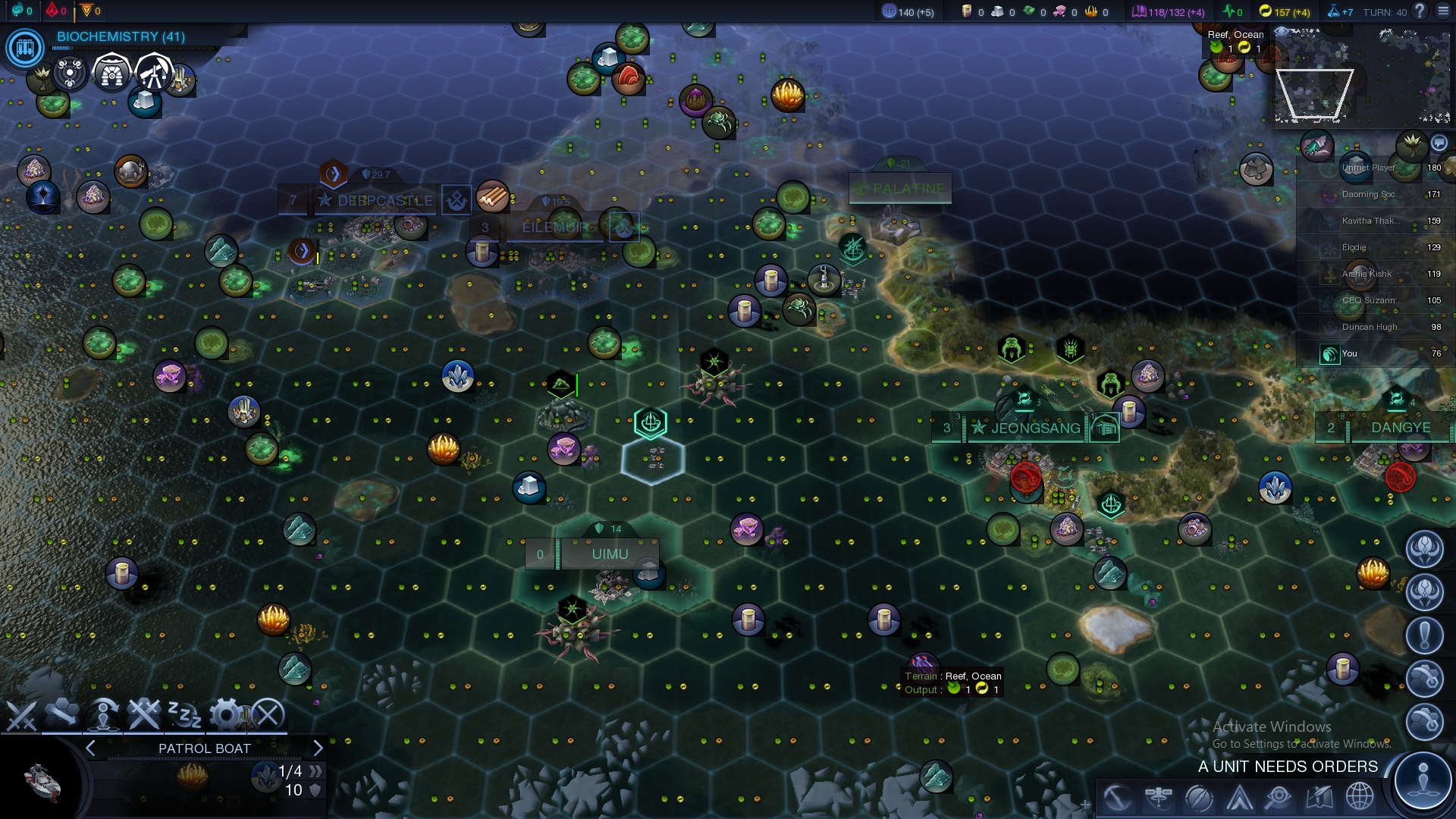 Evaluation: This has been a bit slow and unproductive so far. In the next 10 turns I have to take out the NSA. 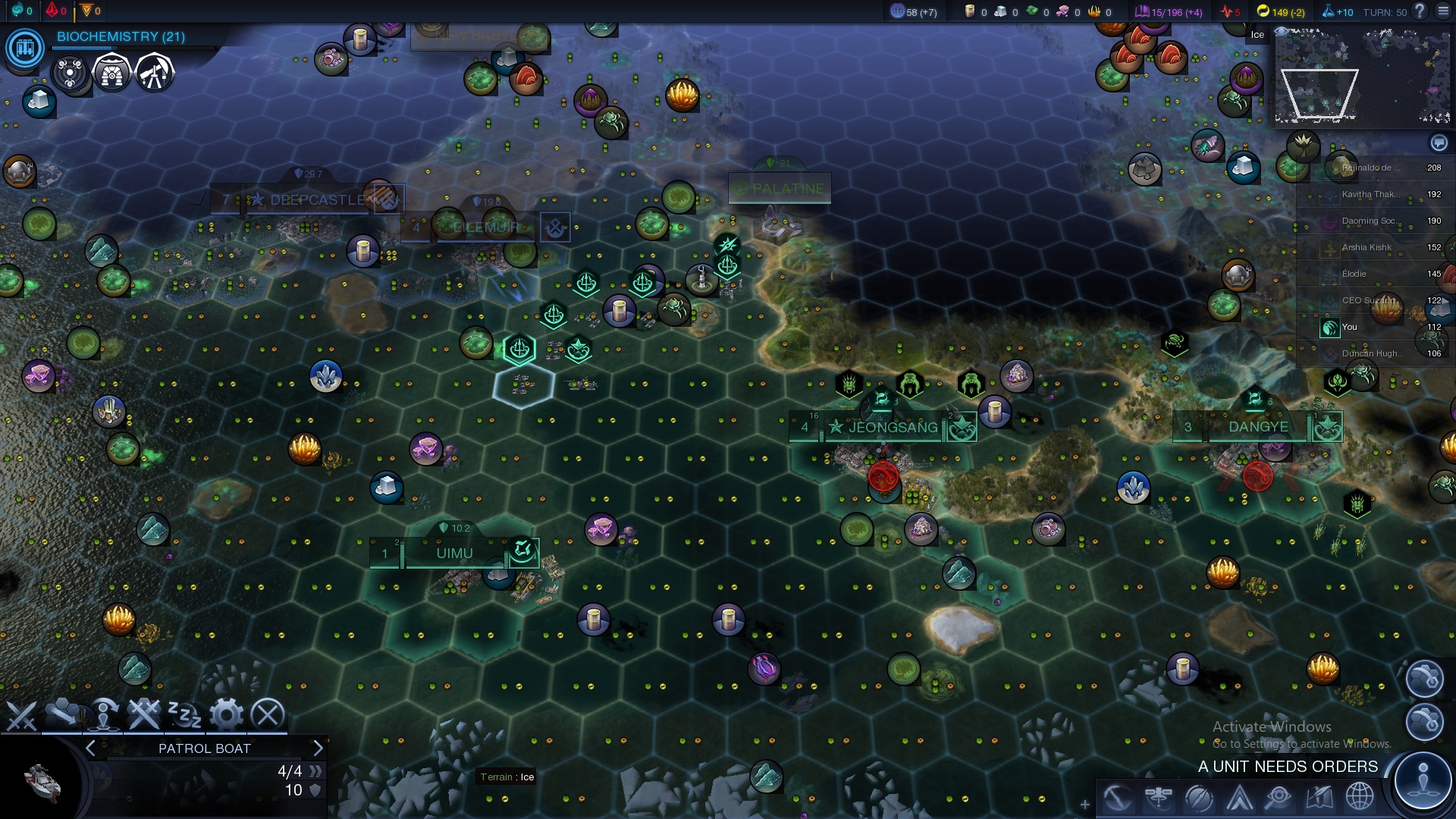 53. I finally declare war on the NSA. I finish excavation of the Progenitor device and take +1 into Supremacy. Also got an artifact. I use it up with 2 others to make Soul Discerner for my spies.
+48 culture from a Derelict Settlement.

56. I capture a city and annex it. Destroyed 2 gunboats.

57. I take +1 food from Recyclers. Destroyed a combat cover, a submarine and a gunboat. I take Industrialist trait.

60. NSA has been eliminated for a 714 spoils of war. I took Ecology, Genetics, Planetary Survey, Phisics and some energy for myself. The capital only has a Pharma Lab.

Evaluation: With the NSA gone, I am now free to take over the world. In the next 10 turns I should take out another colony. 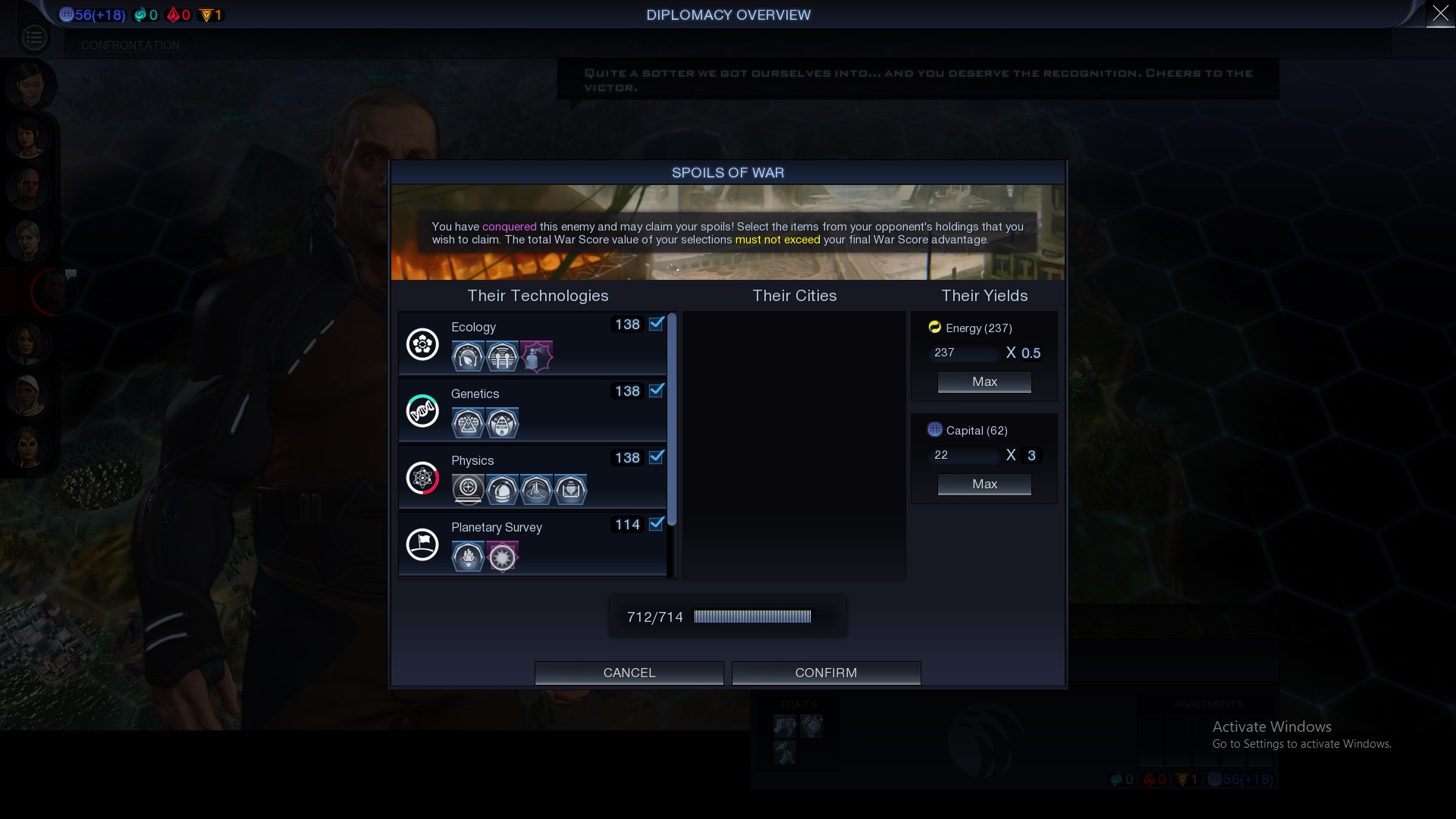 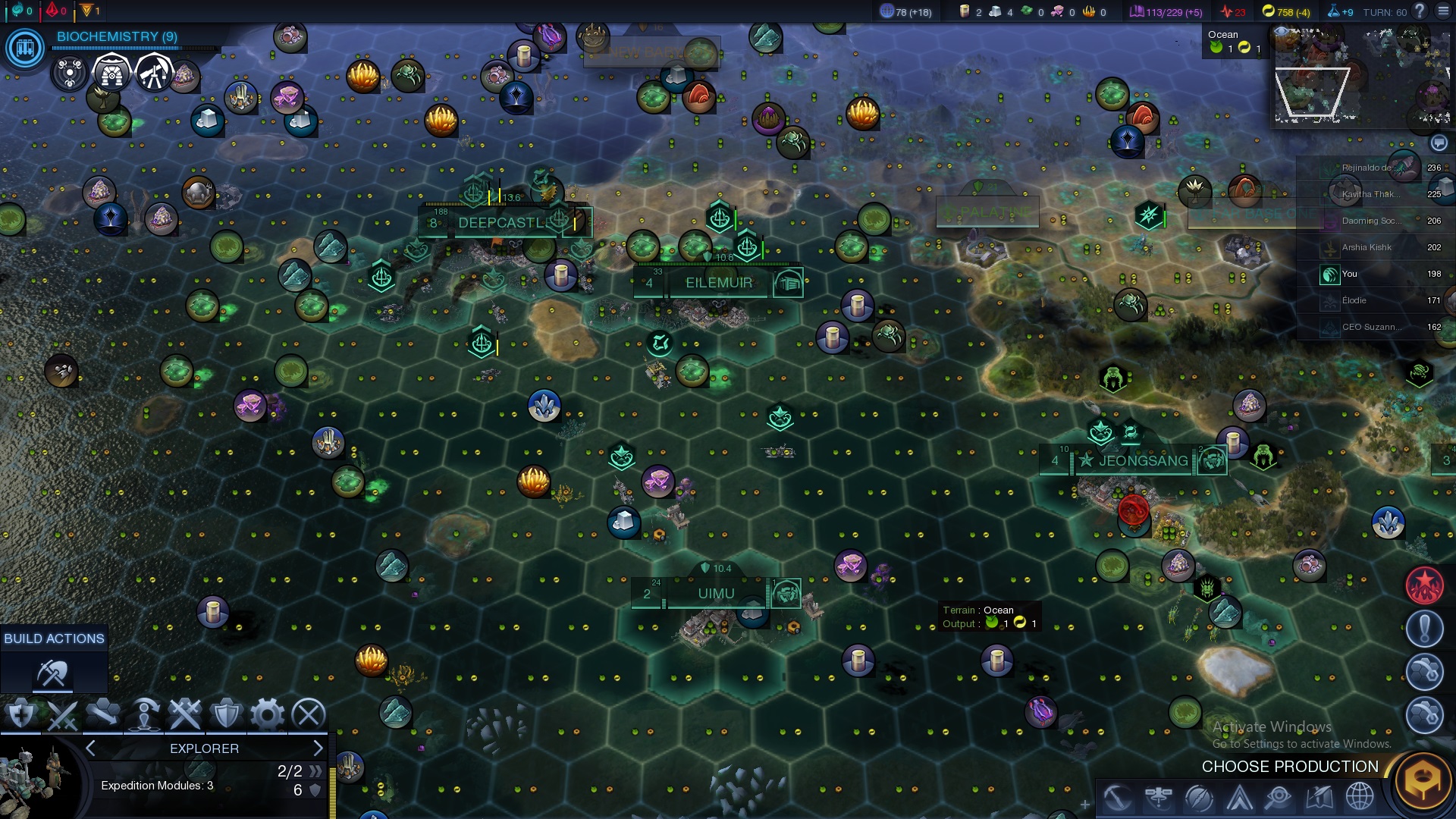 I've now played up to turn 84 where I've decided I'm not going to continue since it would be an average victory with nothing noteworthy attached to it. I have just taken last city except the capital from PAC through Spoils of War and have another 1200 Spoils of War on Al Falah. Army is heading to capture Kavithan Protectorate's water cities and then ARC > Franco Iberia > Brasilia. But I don't want to play through it.

Maybe a 140-150 Domination victory. I have been too slow in my attempt, but on the other hand since it was not a cooked map, some capitals were on land and my poor starting land I am not disappointed by the game. I might try again some day but maybe not on Protean and on a different Planet type and maybe other Seeding Options. I was not impressed by either Engineers or Supply Module. And even Laboratory isn't very outstanding compared to Cryotome.

60. Bought Ultrasonic Fence in the capital. I need some trade Convoys... And I think Far Base One station has a hidden affinity quest for me.

69. Declared War on PAC and captured their water city. They are stuck in-land.

Evaluation: I am going for at least a turn 120 victory.

73. I declare war on Al Falah. I capture a small city and raze it. -33 health is starting to affect my production levels.

74. New Virtue: I take the Industry opener. I find a progenitor artifact and some preliminary research.

75. Capture one more city and raze it.

76. Capture one more city and raze it. +116 culture from Derelict Settlement.

78. Aliens are now Friendly! I buy 2 trade convoys to use. Ultrasonic fence quest has not triggered yet but keeping aliens friendly should suffice.

79. I send a convoy to Far Base One and I was right in my assumption: Dogmatic Engineering quest has started!
Captured another city and razing it.

80. I capture one more city and I annex it because it has 2 firaxite and 2 titanium.

81. I capture one more city of Al Falah and raze it. Upgrade faction ability to lvl 3. 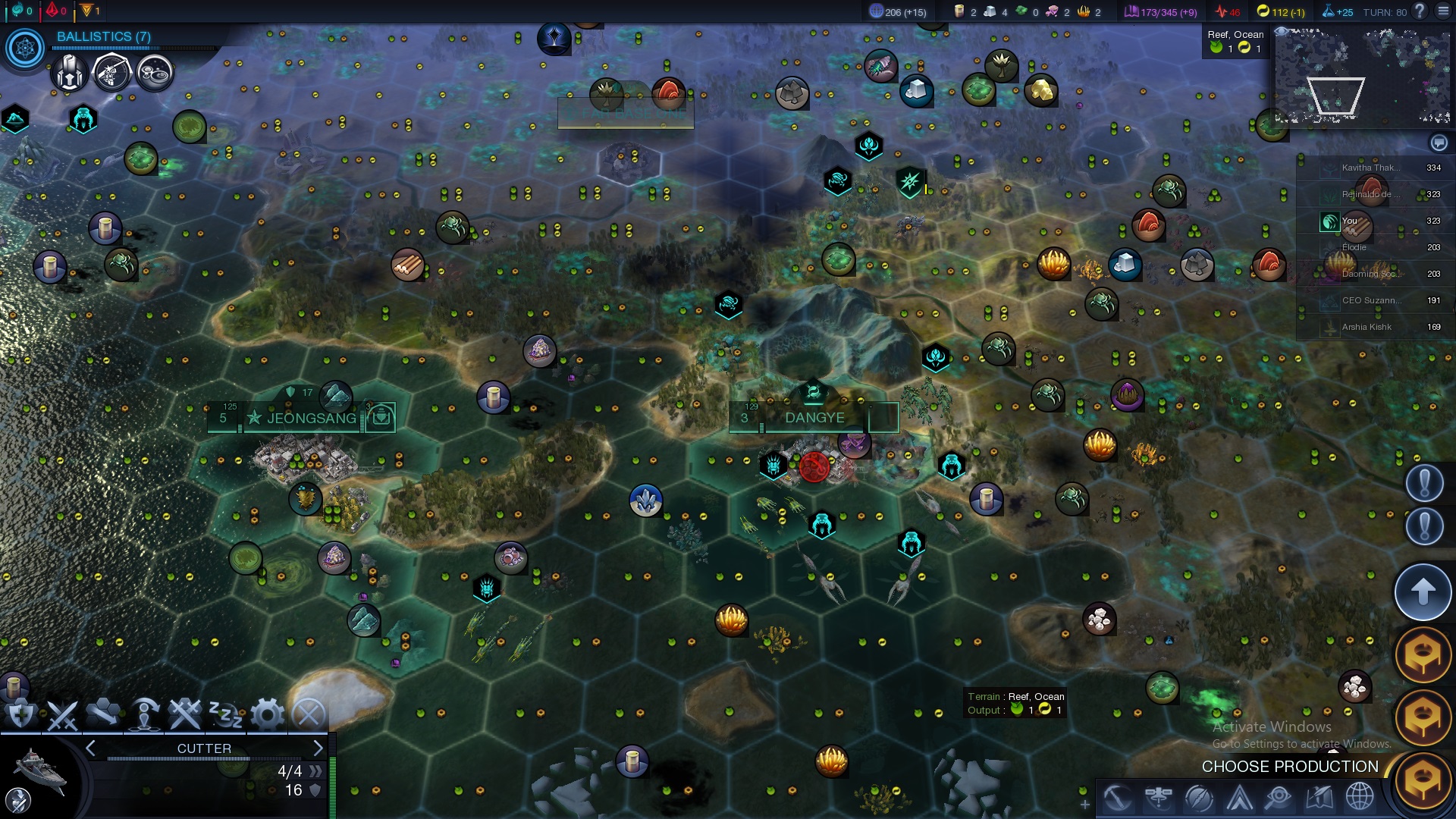 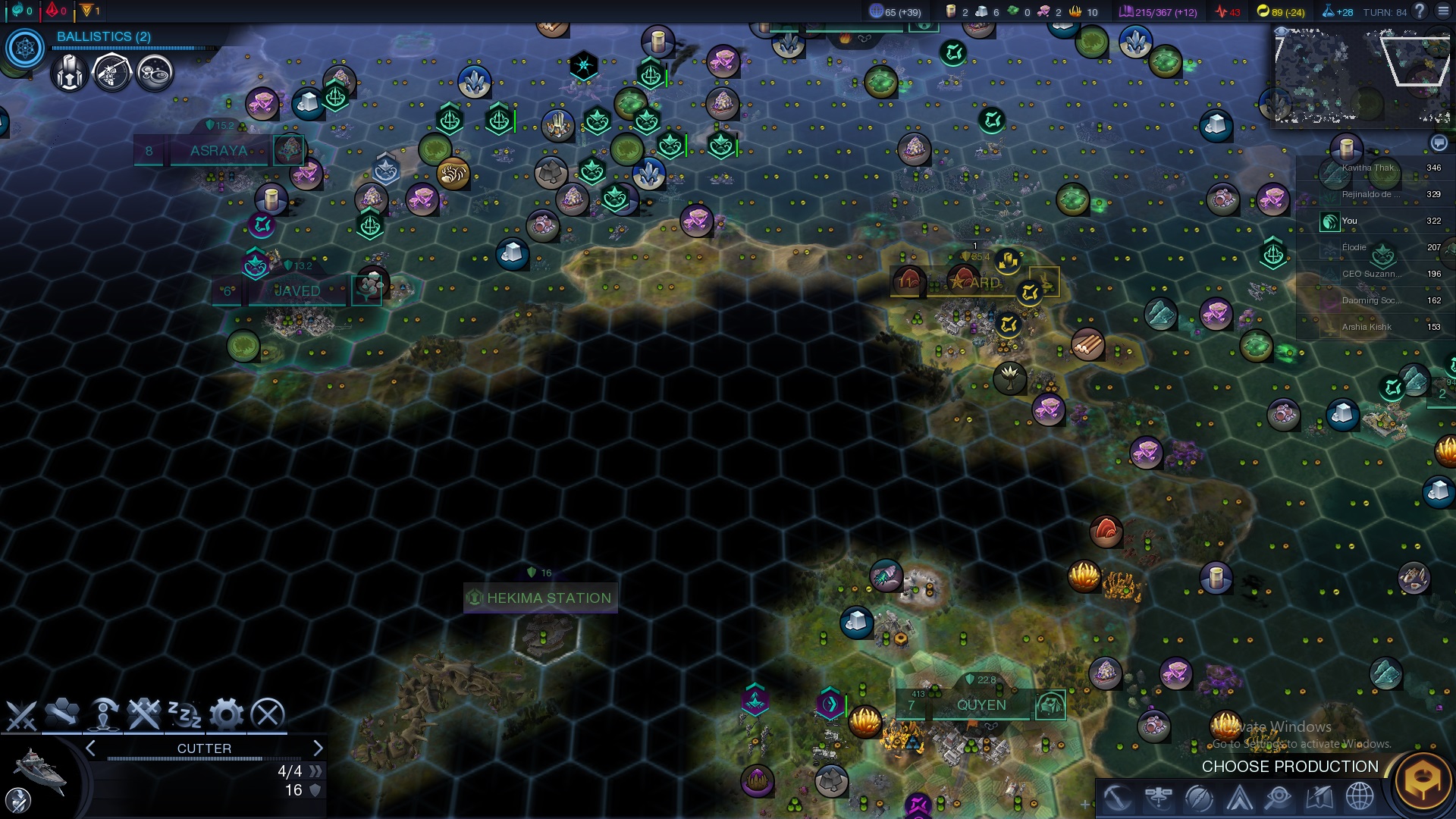