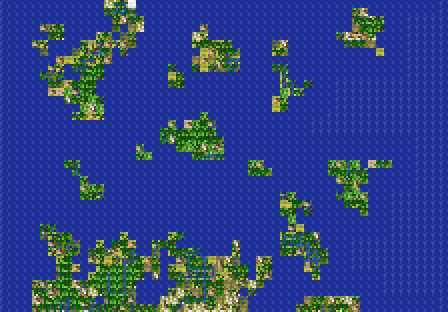 Hi community!
I created a map generator and reverse-engineered the Colonization map file format.
Here are 100 randomly generated maps, which are SMALLER than normal maps.
This means the maps are 58x41 instead of the usual 58x72.
Still smaller maps are possible, but they make the minimap display glitch out.

All of these maps consist of islands of various sizes.
Sometimes you get a very tiny starting island, but since the map is so small rushing the AI immediately is easy.
The islands very often provide canals and extensive rivers for convenient navigation.
The maps are similar, but still quite different from normal generated maps.
None of these maps have more than 15 land masses, so the AI should work fine.
Above you can see an example map.


Usage:
- Only works with the 3.0 patch version
- Unzip or copy&paste maps that you want to play into the Colonization folder
- Click "Start a Game in AMERICA" and select "Map Editor"
- Select the map you want to play

Notes:
- You cannot load games with a different map size. Those slots will show up empty, but they ARE NOT!
- You usually (always?) have the tendency to start in the very north slot <--- this is probably due to me using the "RNG fixed" exe to start the maps, which breaks map generation, among other things. Use the regular exe for starting I think
- Travelling to the west side of the map in the beginning might be worth it, because this is where the larger islands tend to be, and the AI won't annoy you as quickly.

Creating a map by Civ AI