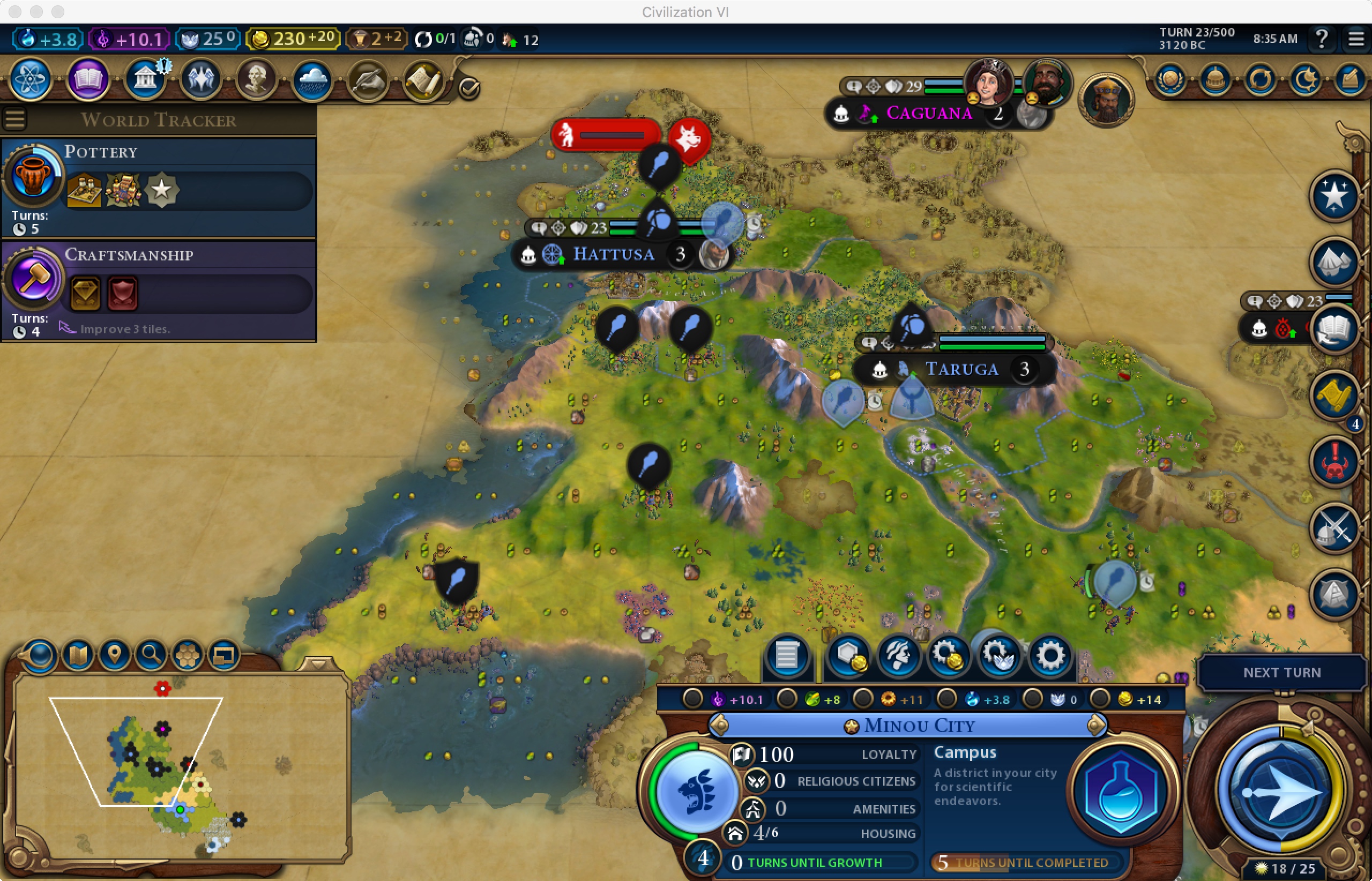 T23: Himoko levies Taruga. Also thanks to Himoko, we can pick a pandemic this urn. As expected Religious Settlements is already taken, but sadly our second choice Lady of the Reeds and Marshes is also gone. That Pantheon would have really let our core cities balance growth and production. We can take the somewhat boring but effective Divine Spark instead.

The hut has an envoy as well as a valuable Voidsingers invitation. We can send the envoy to Hattusa right away, revealing another hut but unfortunately no new AI targets. We discover another Hero, this time the unimpressive Maui. Hattusa also reveals a spot for a future coastal hill city with 3 Horses in the third ring and Bear Tree Clan, which is selling Warriors.

Finally, with EE complete we can sell Open Borders. OB is worth 15g+12g to Mali and England. That's enough for another Builder, who's job will be to chop dome Settlers. 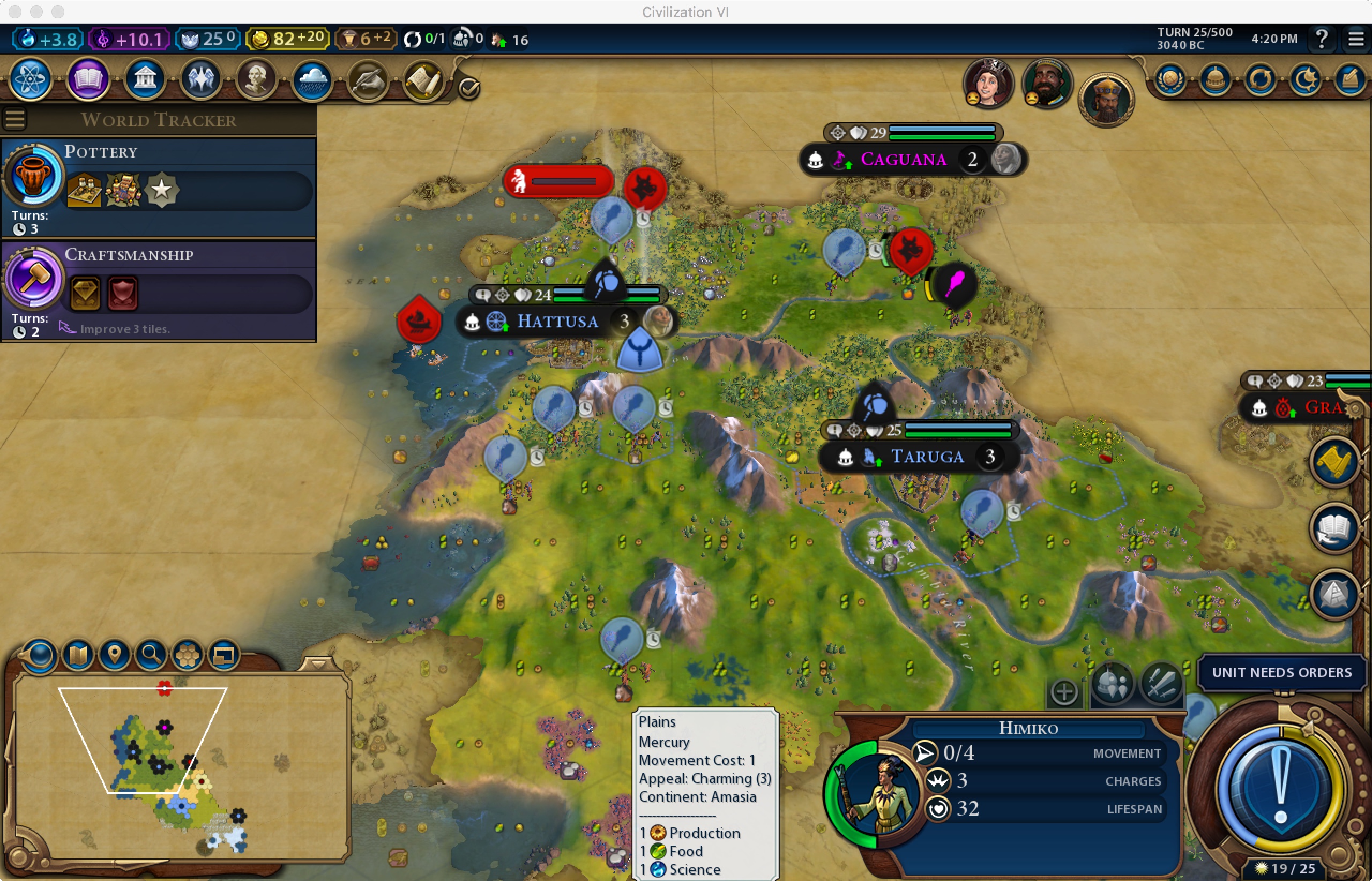 T24: A moment of concern comes and passes as the new Builders walks onto a hill and ends the turn exposed to an alerted barb Scout. Luckily, the Scout continues south.

T25: Himoko levies Hattusa next, and we get the Marble hooked up for the Craftsmanship and Masonry boosts, also earning an envoy with Fez. It’s worth another 58/3 from England.

As we hit T25, we have just one city but have a major army onthe move with 11 Warriors thanks to levies, and a whopping 8 envoys sent. Science is at just 4spt due to the penalty but we have a sweet 10cpt thanks to the wonder. 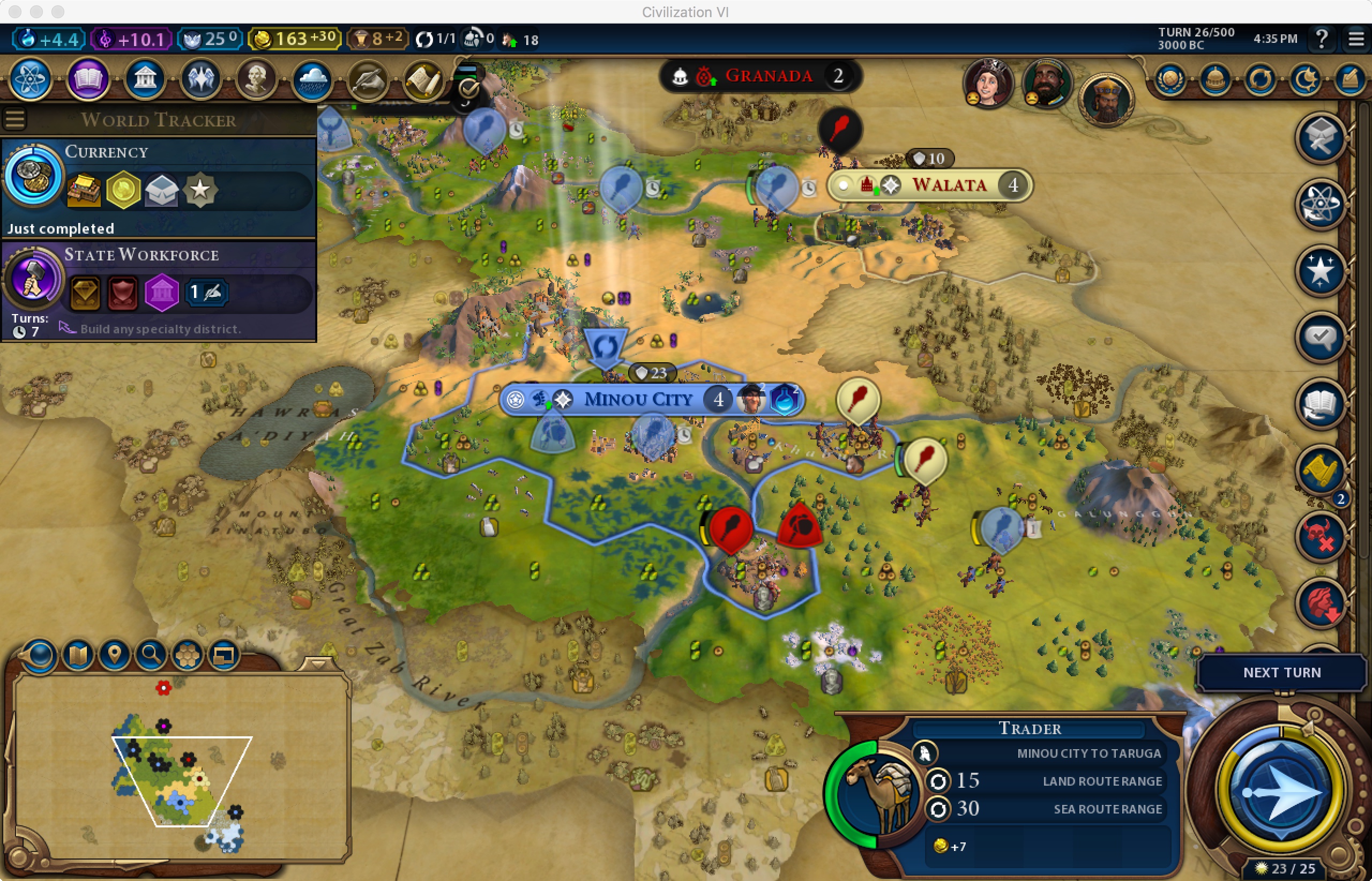 T26: We pop a Trader from the hut, but sadly also lose a Builder to that damn barb Warrior. The Trader turns out to be ultra valuable, as the envoy it provides to Taruga reveals Hercules! He is definitely our preferred option for Hero #2. The Trader completes Currency to boot. which means we can know also create Industries. We can clear the barb camp for the MT boost, but that Builder was supposed to make the last mine we need for Apprenticeship so we really need to capture him back ASAP. Craftsmanship is completed this turn, and we can swap into Colonization now to be ready for a Settler once the Campus finishes. 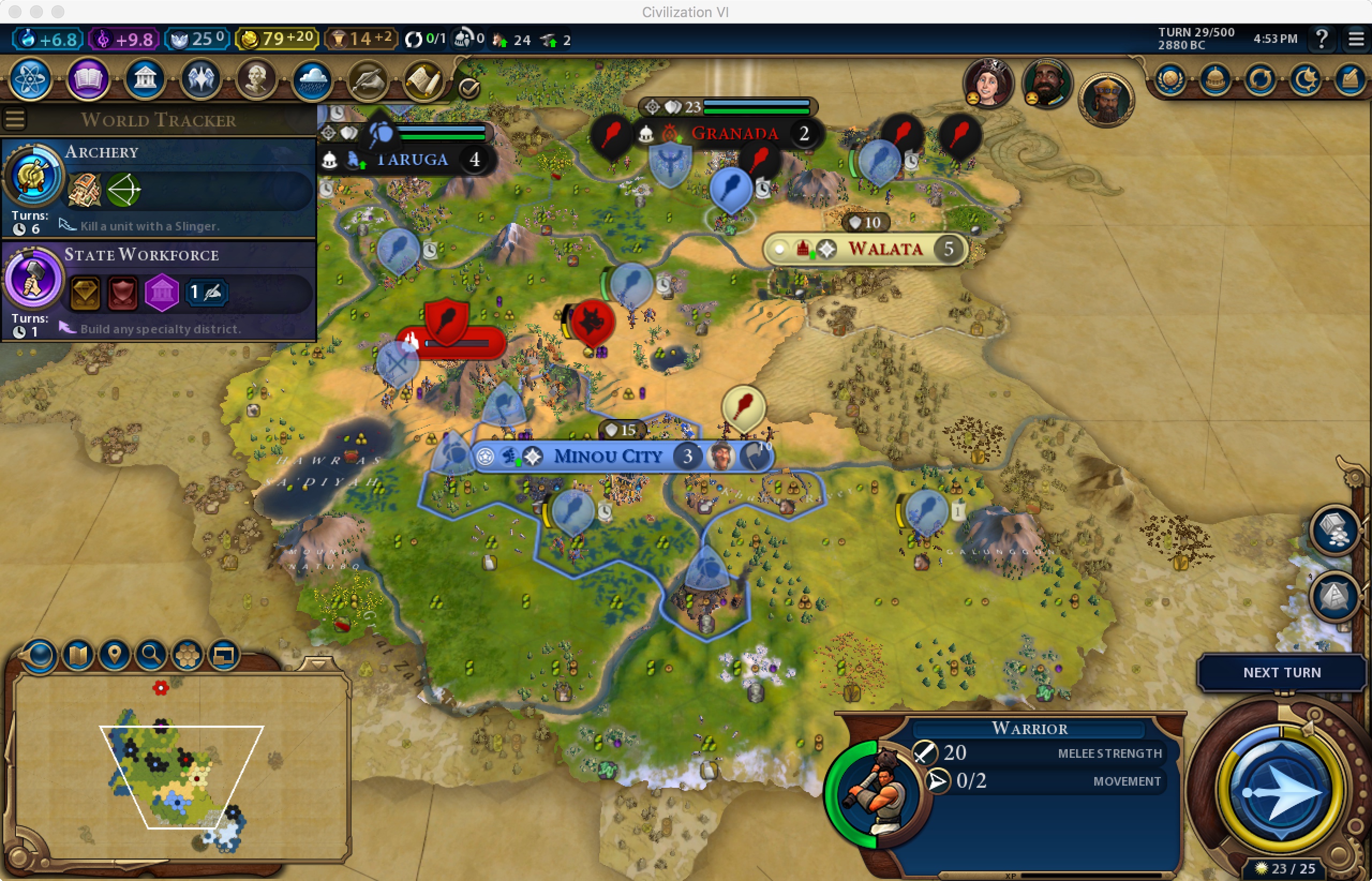 T27: We have new neighbors. The Stone Face Clan spawns right near the capital. It is selling Spears for 155g, which may end up being worthwhile just for an extra envoy to Granada. The barb Warrior pillages our Marble. What a pain that one Warrior is becoming! One of the levied Hattusa Warriors attacks a barb Slinger guarding a camp.

T28: Pottery also this turn, our third "normally" researched tech. Our first district, the Campus completes, with a free Library thanks to Babylon’s special ability and boost SWF in plenty of time. With Divine Spark, we are instantly gaining 3GSp per turn. Knocking out the Slinger completes Bronze Working, and reveals one Iron near the capital. We don’t even need to hook it up to start accumulating the resource thanks to Hatusa. Magnus+Colonization awesomely allow us to chop a Settler immediately with just one woods thanks to the multiplicative 50% bonuses. Sinec we have some gold lying around and no immediate needs, we may as well buy a Spear to clear a route to the preferred settling spot (and get that Granada envoy). Finally, two Warriors rescue our poor Builder after his two turns in the frightening captivity of the barbarians..

T29: More barbarian annoyance, as now we loose the Trader to a barb Scout. Otherwise the turn is uneventful, mostly shifting a mass of units east and getting our Spear up to protect the Settler from any more of these pesky barbs.

Thanks for the nice setup and let's play – would you please share the game/map seed so that I could play along? (Apologies if it's somewhere in the middle of the thread, I didn't want to read too much to avoid spoilers.) Thank you

Sorry, I ended up quitting the game but I recently managed to break the 100 turn barrier on a Cooked Map. You can get the save and follow the game here:

Let's Win a Diplomatic Victory as a Monarchy