I am currently working on this scenario (been working on it since early this year in fact) and I think it's finally time to post a dedicated thread for it! If you want to see what inspired me to make this scenario, follow this link.


So here's the Scenario:

This is a randomly generated 362X362 world. The world is split (roughly) into two continents, the Old World and the New World. The Old World is full of well-developed civilizations. 26 in total! Those 26 civs have basically already been "playing the game" as it were and already have cities, buildings in those cities (plus Pops in those cities), tile improvements, such as roads (all cities and civs are connected), irrigation, and mines constructed. Essentially you could play an entire game of Civ in the Old World without ever venturing to the New World... except there's a catch! The Old World has no Industrial or Modern Era resources! Also, you can't build workers and the workers you start with can't build road, to cut down on road spam (my eternal enemy!). However, in New World Cities you can build Colonial Workers that can build roads! So you must build a colonial empire to get that advantage over your enemies! But beware! The New World isn't completely unoccupied! There are 5 New World civilizations that are far behind the Old World. They're in the ancient era, they can't build workers, settlers or really any units beyond the initial warrior, archer, and scout units for a very long time. Essentially, New World Civs aren't meant to be playable, even if you can select to play as them. Their starts are meant only for masochists who have a hate boner against fun. They're basically there to act as a bit of a speed bump to colonial growth and to add a bit more dimension to New World related diplomacy (do you crush them under your heel, or do you prop them up against your Old World Rivals? Decisions, decisions...).

Here's some screenshots of the map: 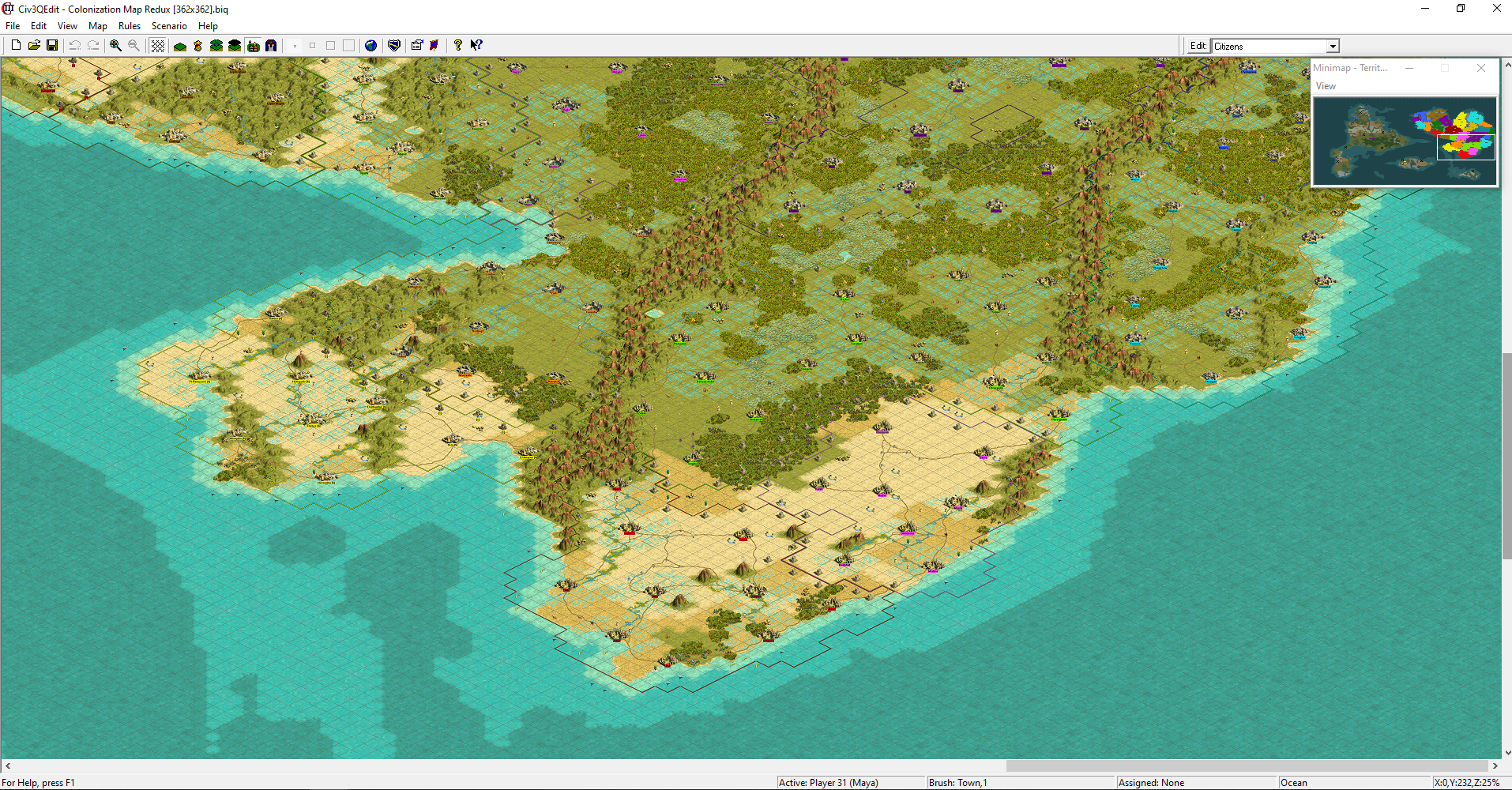 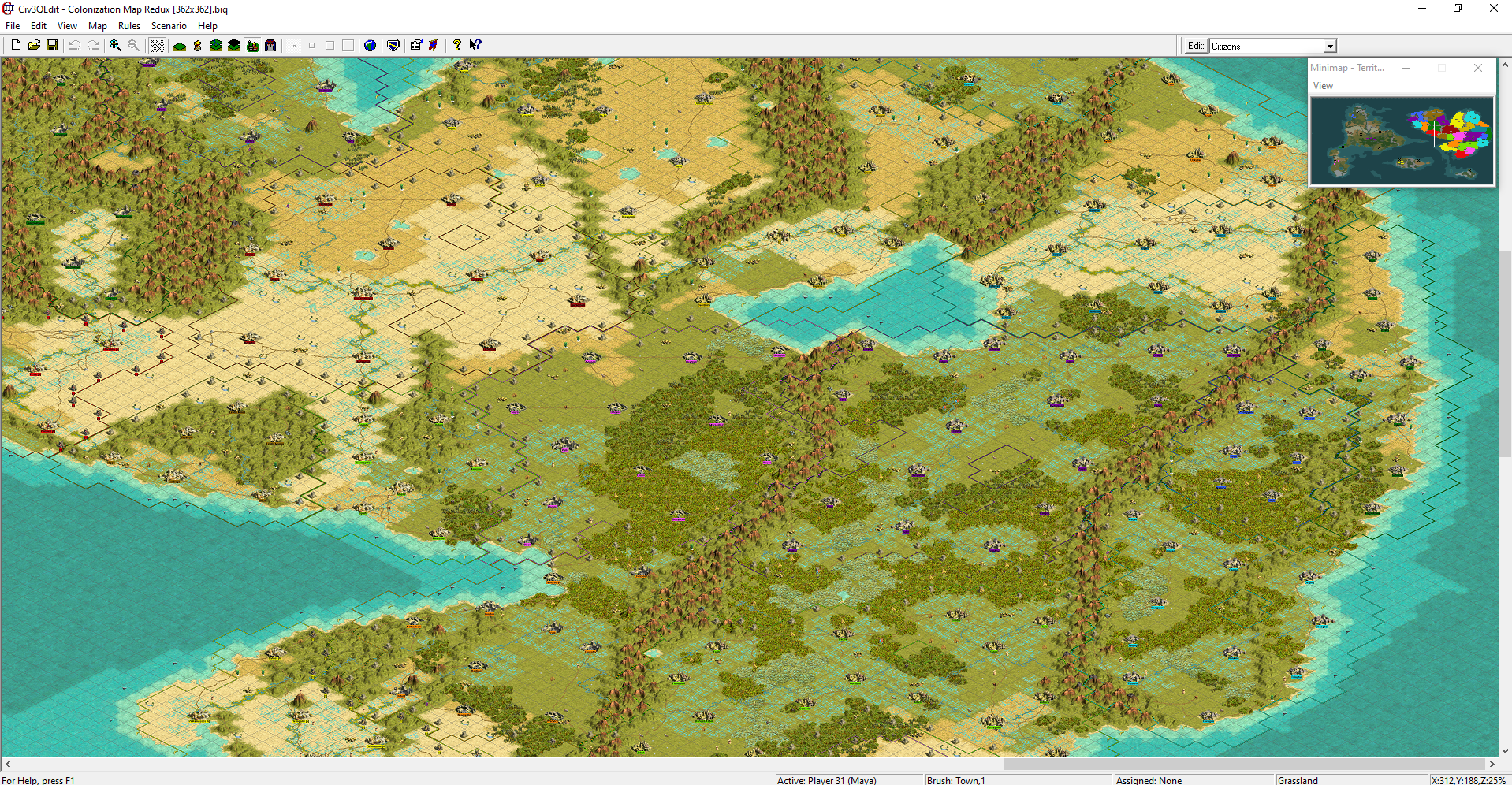 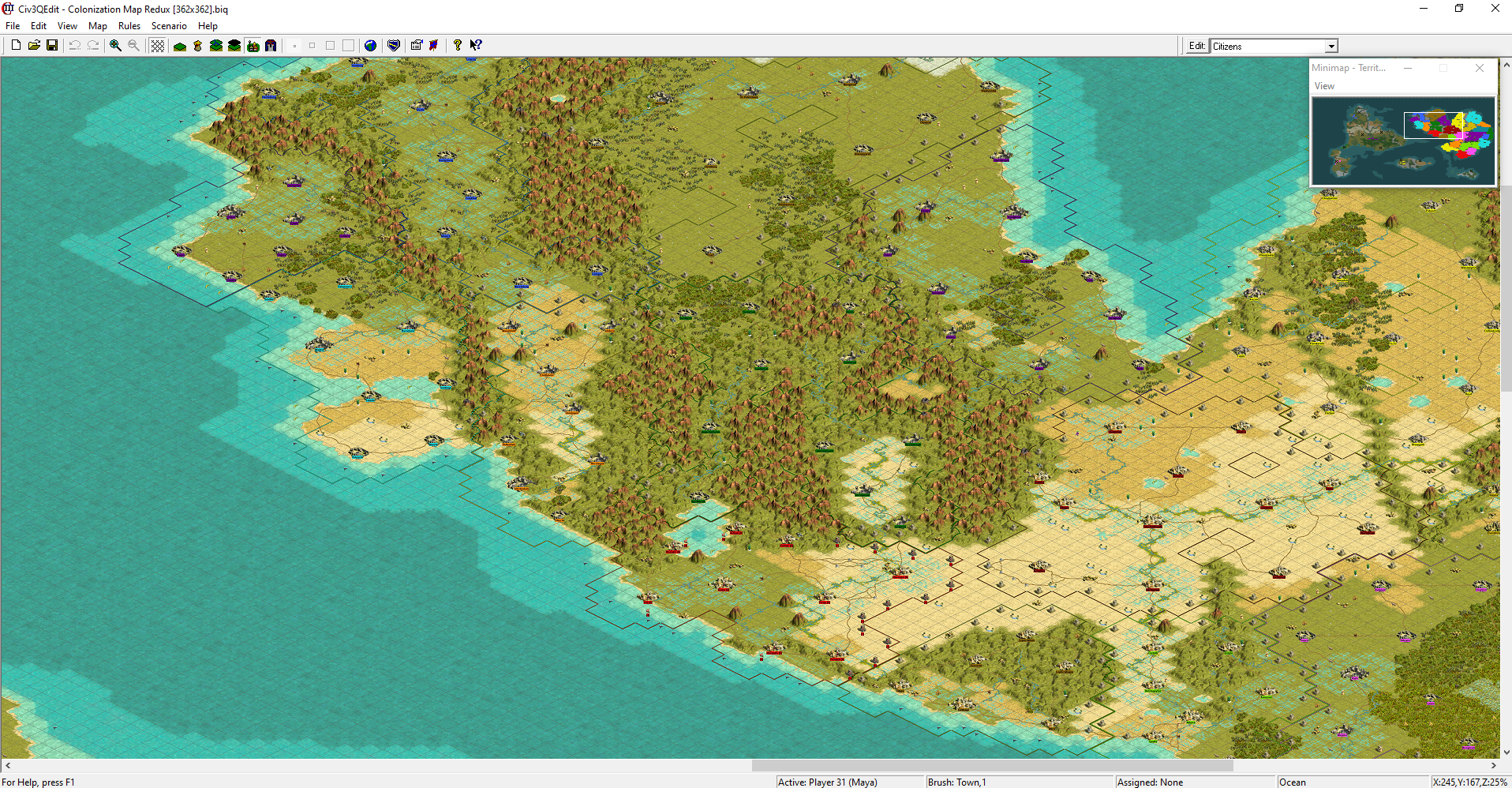 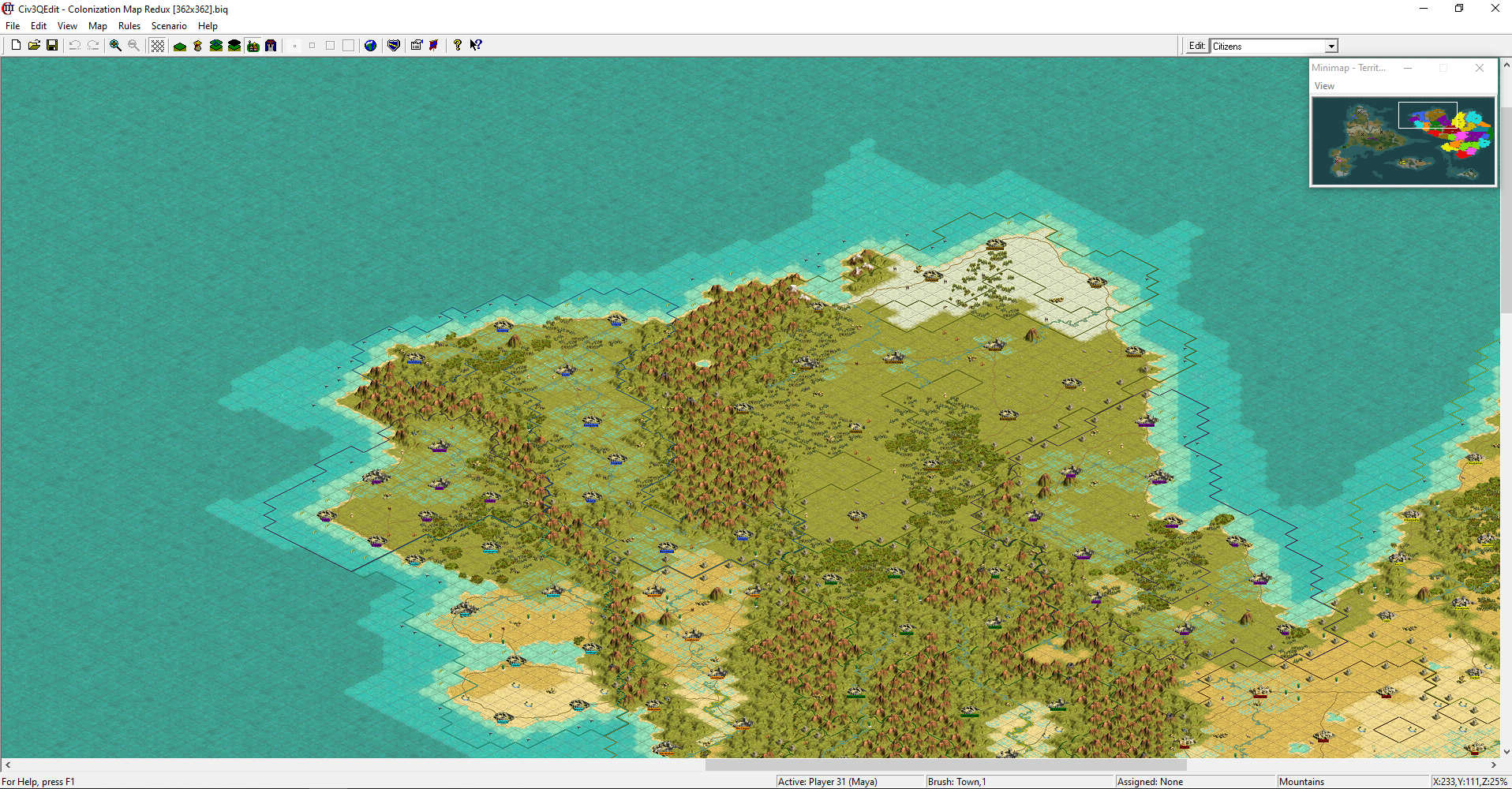 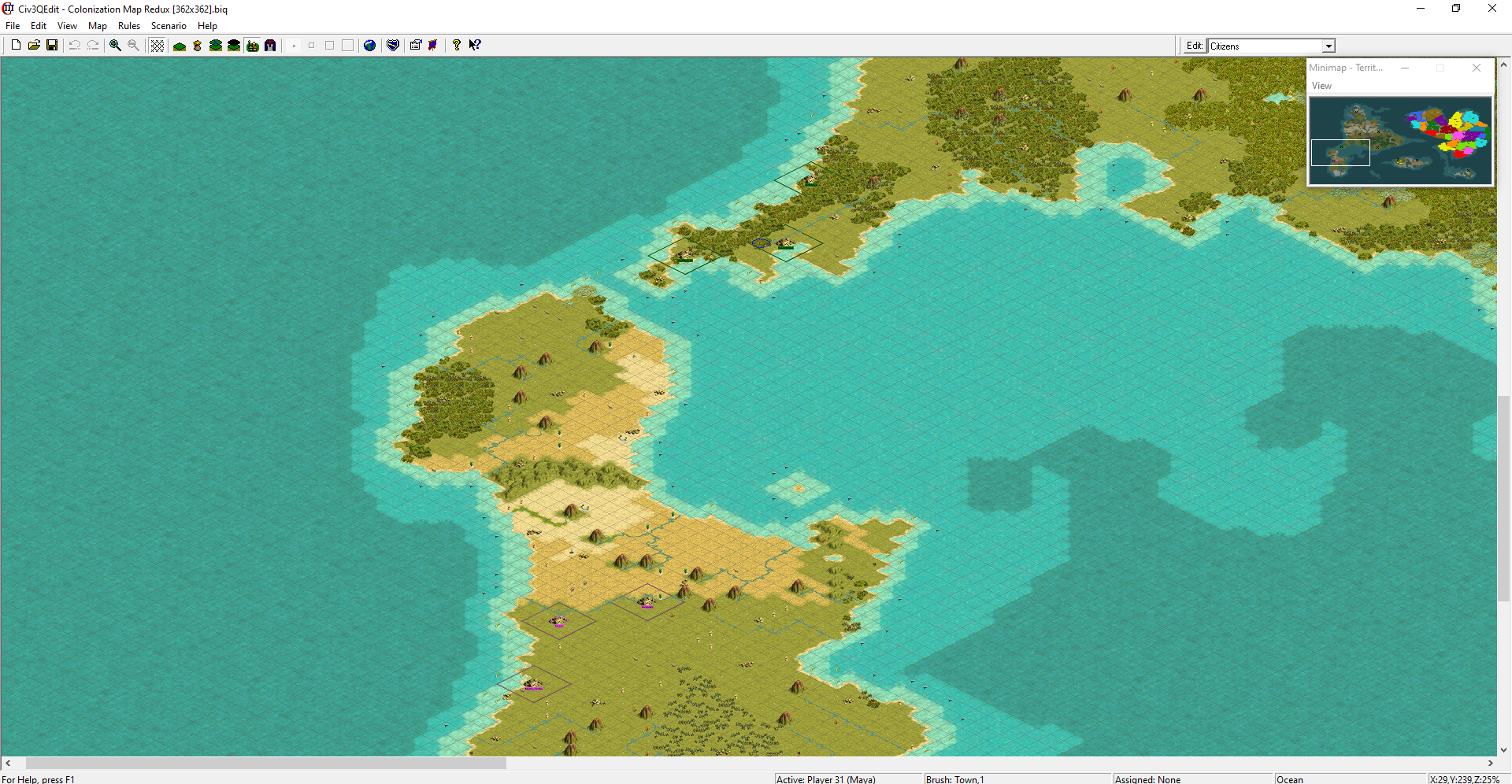 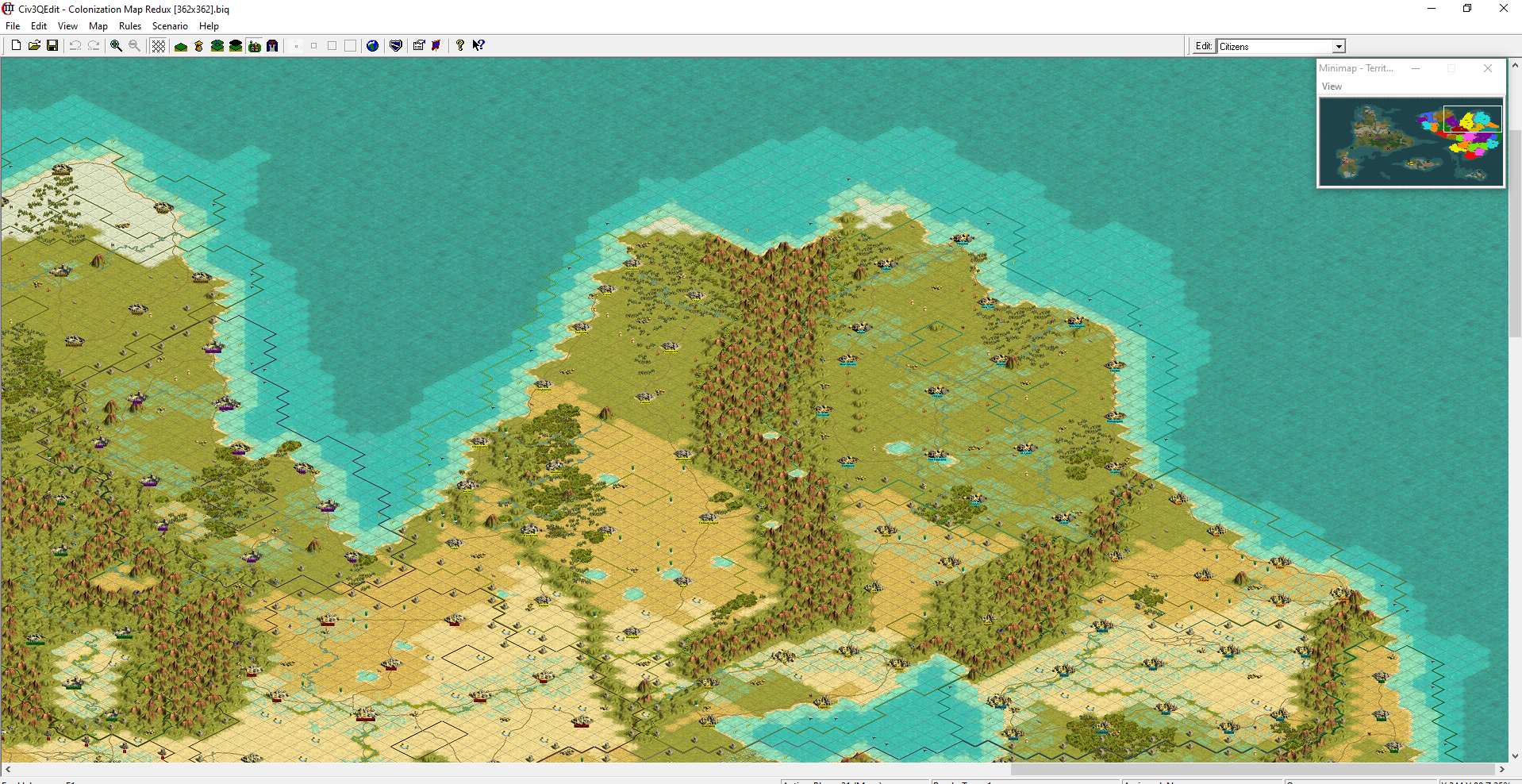 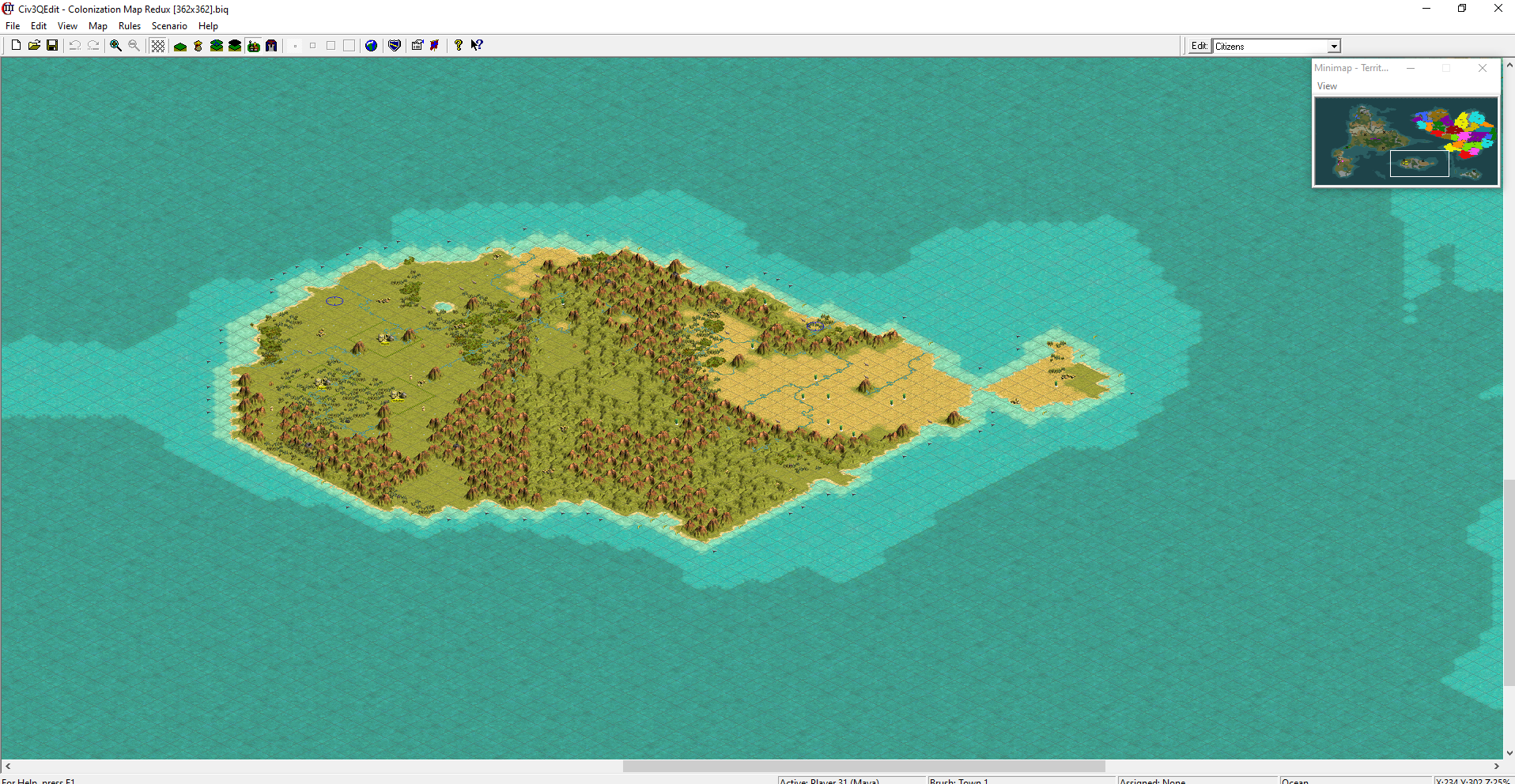 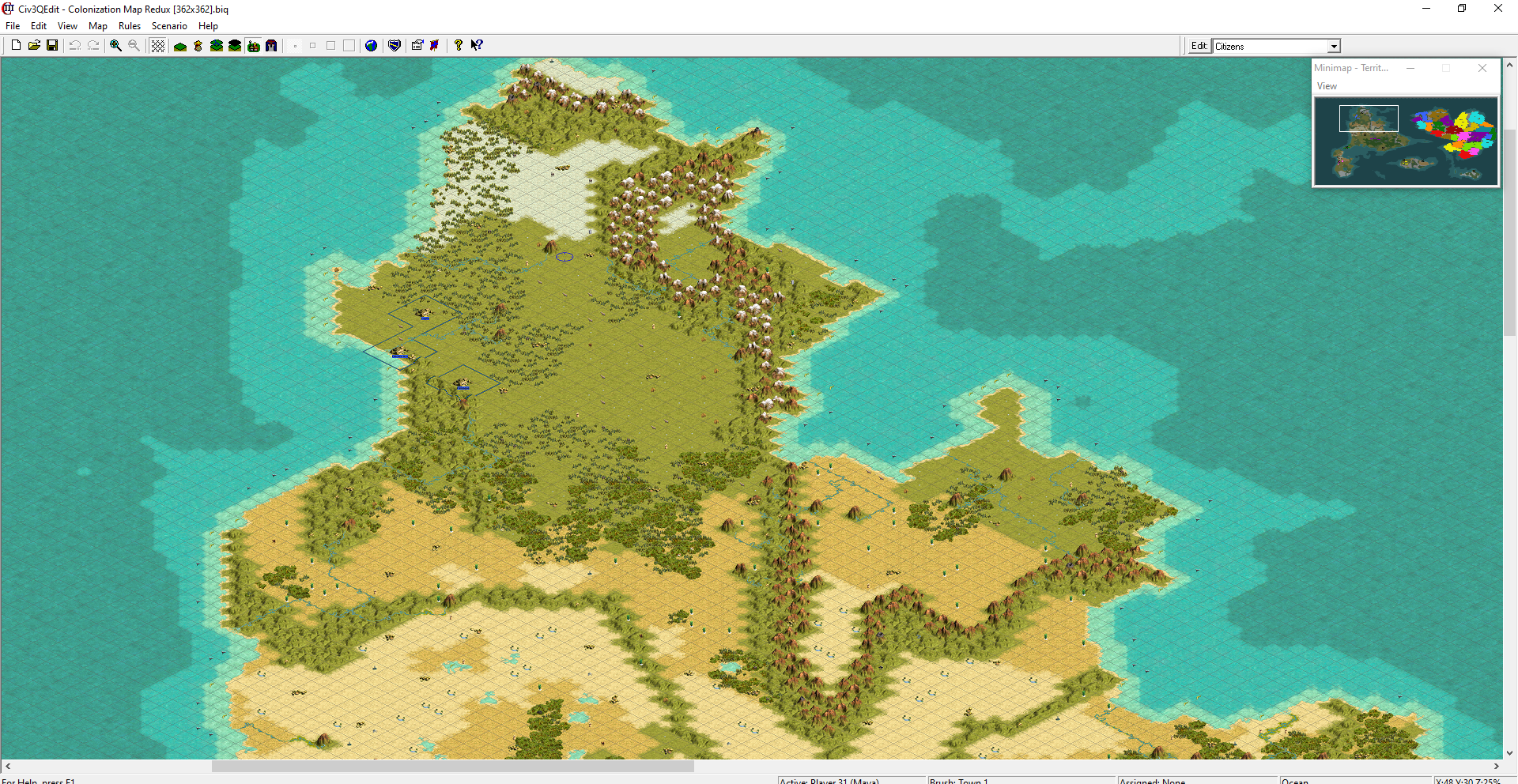 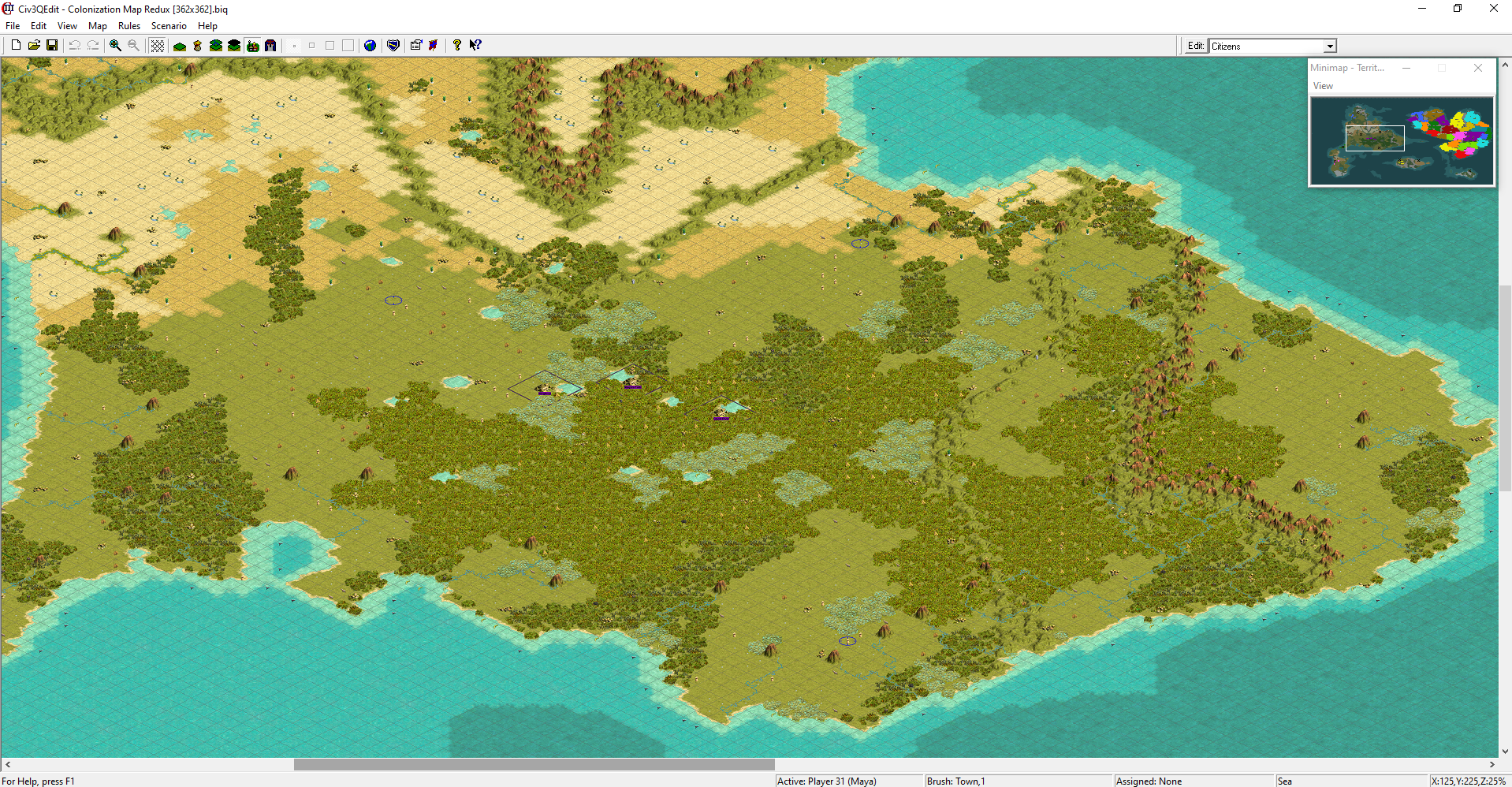 The files uploaded are the scenario itself (currently unplayable) and the 9 other alternate maps I considered using. Use them however you like. I uploaded the incomplete scenario to get some feedback on it and to get some additional eyes on it. I think I got rid of all the advanced resources in the Old World, but on a map this size you can never be completely sure.

Only a glorified city-state situated between the West coast of Eurasia and the foothills of Alpes Minor only a couple hundred years ago, the Roman Republic has seen a meteoric rise, first with the subjugation of the 28 tribes of Latium and then the rapid conquest of Cis Alpine Gaul from the Celts, thus reducing them to their current mountain homeland. Presently Rome is at a crossroads. The Senate and People are divided. One faction, the Claudii push for the continued conquest of all of mineral rich Gaul, seeing the glory and riches that it would afford their family. However, Gaul is notoriously difficult country to fight in, as the numerous failed Roman raids there can attest to and another faction, the Bruttii offer a potentially easier alternative: conquer Carthage in an easterly move that could potentially see further conquests in Greece and France. Why break the Roman State against the Gallic Rock when there are easier conquests to be had elsewhere? Meanwhile, there is talk among the fishermen of rumors of lands to the West made of milk and honey, but surely they talk nonsense! Meanwhile, the choice is yours, Consul! Lead on to our Glory... or Doom.

Battered and bruised, the Celtic Gauls live on! Having lost our outer holdings in Cis Alpine Gaul to the south from the intransigent Romans, we pray to the Gods that they remain sated for Gallic land and leave us to our mountain home. Unfortunately our prayers seem to not have been answered! Reports trickle in to our king that the Romans have been building up troops along our mutual frontier to our south. It couldn't come at a worse time, with the Germans pressuring us on our northern frontier. However, the Gallic people shall not go out without a fight! Not when the very lands our ancestors settled grant us a sturdy defense! Let our enemies come! They shall break against our mighty shields!

I'll be uploading Alpha 1 in a few days. Remember, Alpha is just about getting the mechanics finished. Balance will come during the Beta. So any agreed on balance changes won't be implemented until the Beta begins. So remember, any numbers ARE NOT FINAL. I literally pulled them out my butt and are untested and I tended to err on the side of absurdity with the numbers.

Looking For Thoughts On Elephant Warfare

AI behavior with the "replaces others with this flag" flag