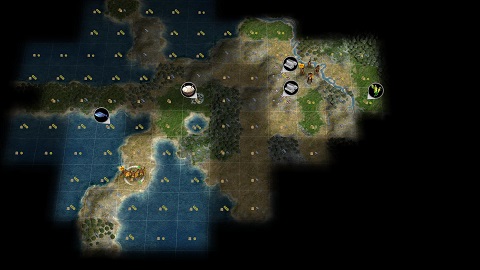 Noble Zarkon appears to be distracted by real life (we can all imagine, with the Royal Funeral, how busy this month has been for the nobility) so I'm stepping in to post the spoiler threads for this game. I have a thing or two to say about it, myself.

Reading Requirements
If you are participating in BOTM 241, then you MUST NOT read this thread unless EITHER

This map was begging for a (long-distance) Q rush.


America was not a protective civ and didn't have a capital on a hill.
It was being strangled by hills full of gold though!
There was no way to turn the war off once it started without giving away a city for peace.

Easy to block using that forest hill though.
Sure, I stole that Worker!

Bronze Working was first to get a giant quechua ball.

I mowed down the barbs standing in my way carefully trying to meet them on flat land.
Got lucky and didn't lose a Q or get knocked down to 0.1 hp. 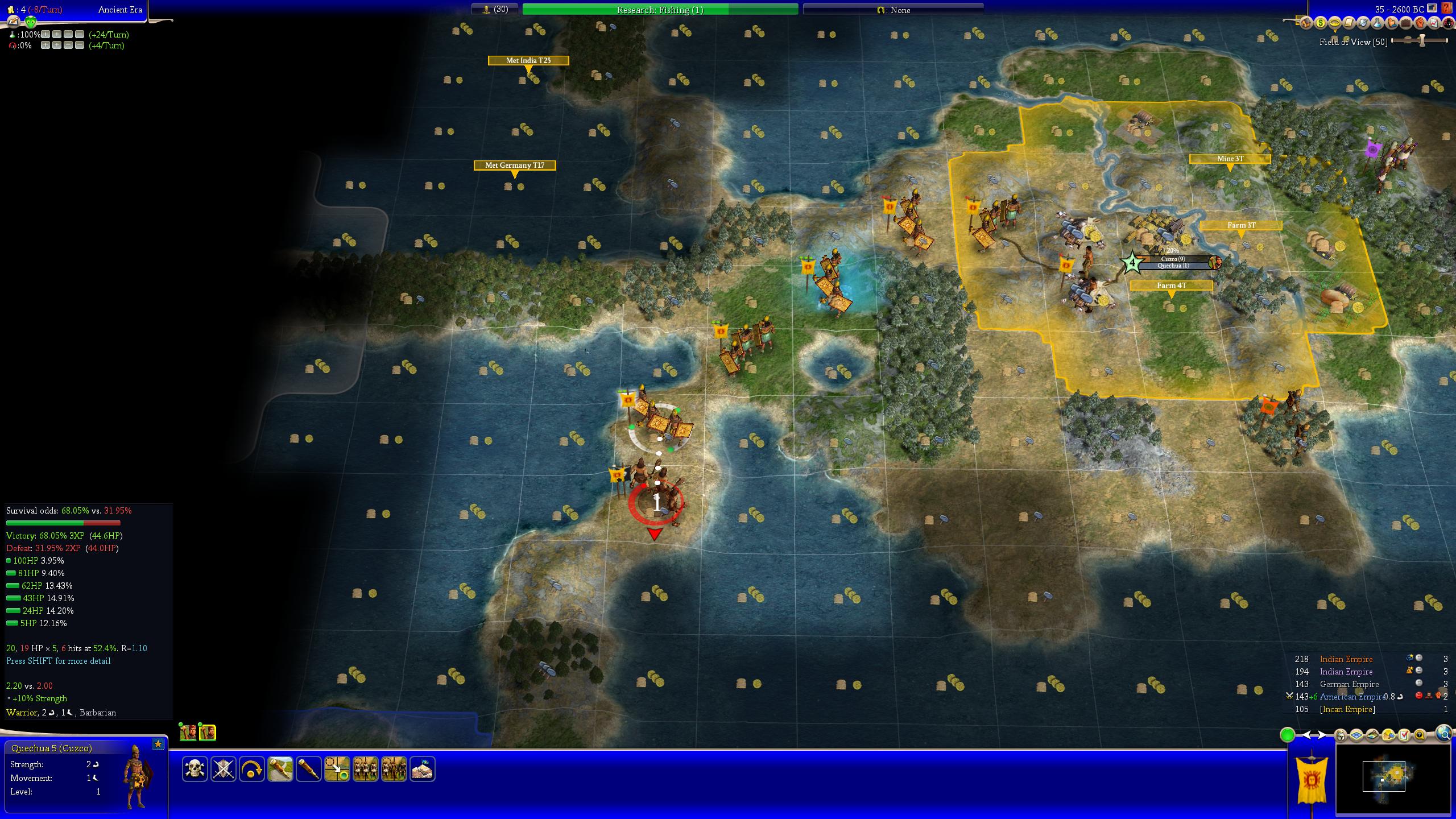 America got a suspicious

tile in the capital. >_<
Then the dreaded message.

Promoted my top Quechua to Combat 2 and just rolled on in expecting a Chariot attack at any moment.
T42 Washington had 4 Archers in his capital.
Then by T44, still 4 Archers!

With good luck I captured a Size 4 capital with only 4 Quechua losses and it had a Lighthouse too.

The next city had 7 Quechuas vs. 3 Archers and due to good luck again I had 1 Quechua left over to capture 2 more workers.

Even the last city was a jackpot city.

I don't think that start could have gone better.
4 barb battles with no deaths and 3 promoted Quechuas.
4 Captured Workers and 3 very strong cities (+9

Started with 11 Q's and lost 7 to take two cities, but built a few more Q's and the last city fell.

Chariot could have certainly dragged things out a long, long time and scuttled the initial rush.
A 5th and then 6th Archer in the capital, or some bad rolls would have saved Americas capital for 10 or 20 more turns too.

Quechua rushes are always nerve wracking!
Choke the AI and they might just spam Archers everywhere.
Don't choke and Chariots will ruin Q's and Axes will annihilate them.

And you're doing all that with the Contender save, I presume, Kaitzilla?

I knew I wasn't up to that level, so I took the Adventurer save with its bonuses, including the 8 starting Quechuas. I attacked Roosevelt, maybe too soon, since Washington still only had one pop and was auto-razed. I lost 3 Quechuas doing that. I marched on to capture New York with no further losses, eliminating the Americans in 3600 BC. Repositioning my units for fog-busting, one of my promoted Q's got eaten by a lion.

After this, I'm sure a more skillful player would have continued the Q rush against another opponent. Surely, Noble Zarkon expected us to do so with this set-up. But with two widely separated cities that had to be guarded from barbs, I took a peaceful approach, trying to settle as much land as I could before my neighbors claimed it. When Frederick started plotting, presumably against me, I converted to Buddhism for better relations. That succeeded in preventing a war. I built the Pyramids in 825 BC and switched to Representation, trying to close some of the tech lead that all of AI were building up. 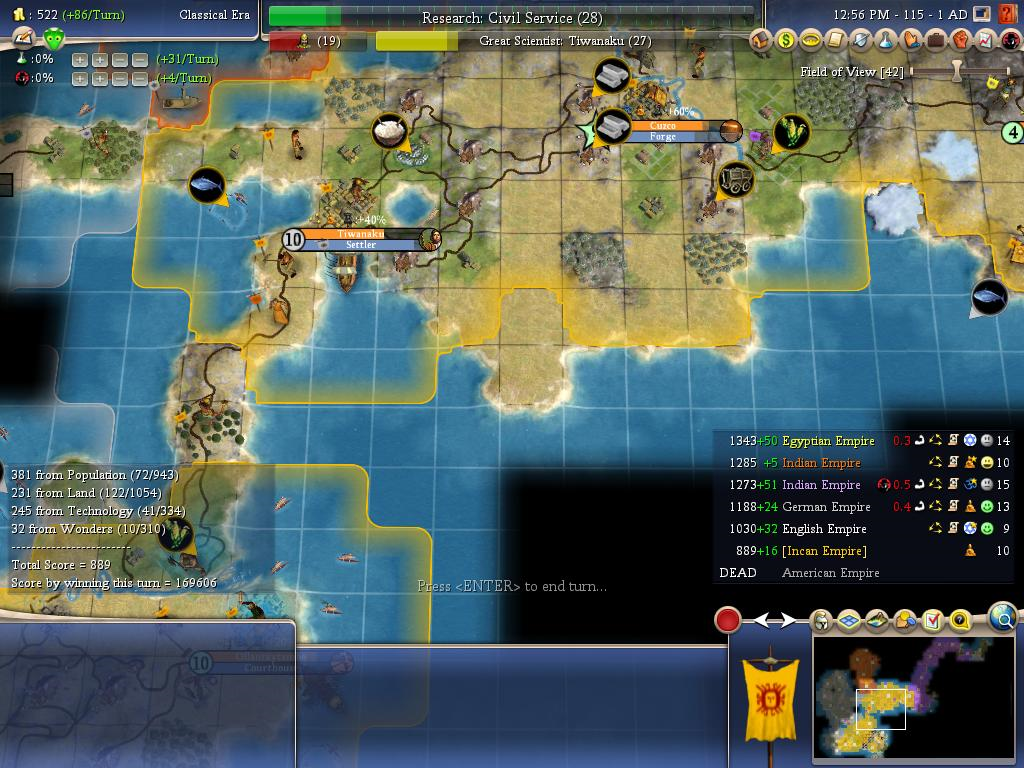 Noble Zarkon has set up this experiment to compare Inca vs. Rome on identical maps. If we had followed the standard procedure of setting the Adventurer save a couple difficulty levels lower than Contender, we could have gotten two sets of data points for this experiment, one from the Deity players and one from the rest of us. But Noble Zarkon gave those of us playing Adventurer a very different experiment: is the alternative advantage we were given at the start to play at Deity equivalent to the cumulative disadvantage of having to play at Deity (compared to, say, Emperor) for the rest of the game? This game is far from over for me, but I'm afraid that my decisions in my first hour of playing have guaranteed that this answer will be No.

I had somewhat less success than WastinTime.

For my first attempt, I moved to settle on the (future) iron hill in an attempt to find more food and leave one of the silvers for a northern city to work. Mostly all it did was delay my settling by two turns. I snagged an American worker but was unable to take any cities. Take two: SIP, concentrate only on quechuas to attack America. Well, my timing and collection of forces still wasn't good enough, although I took their 2nd city. 3rd attempt: Success! Waited to build a larger force and wiped out America in 2320, capturing two cities. That left me with the whole southern "continent" to settle, or capture some barb cities that had sprung up there. To do that, though, I lost a couple good sites on our starting continent to Fred and Gandhi. At 1AD I have 9 cities, 48 pop--the AI have 12-15 cities. Last in score with 664 vs 1588 (Asoka) to 1186 for the AI. Zero Wonders and a grand total of 2 cottages built. With so much good land, though, I'm hoping to crank out a bunch of Great People and harbor some small hopes of catching up to the AI. Gandhi would be the next target, since he can't easily defend the cities he's settled on MY land.

I see now that NZ fully intended us to immediately go after Roosevelt, and that concentrating on settling our starting area would inevitably end in defeat--the land is just so poor. Even with the strong hints, it's tough (at least for me) to beat down America quickly and take that land, but then I've always been bad at rushes. I do wonder how Rome will fare at this: if we wait for praets, we'll have to expand in our own continent first and then go after a more fully developed America, by which time I think we'll be pretty far behind in tech. Possibly an axe rush, but we'd have to wait for IW for that since there's no copper.

Thanks for the very interesting game, NZ. I won't have nearly enough time to finish, but didn't expect to this month. This was just for fun, and maybe to prepare for next month with Rome. And thanks, MG, for putting up the spoiler threads. I'm anxious to hear what other players have done.
Last edited: Sep 26, 2022
[size=-2]"Many things that are natural should be stepped on, hard." -- Arthur C. Clarke[/size]
L

I usually don't play games all the way out and don't think I will this time either so here's where the mighty Inca are at turn 80 - 875 BC: 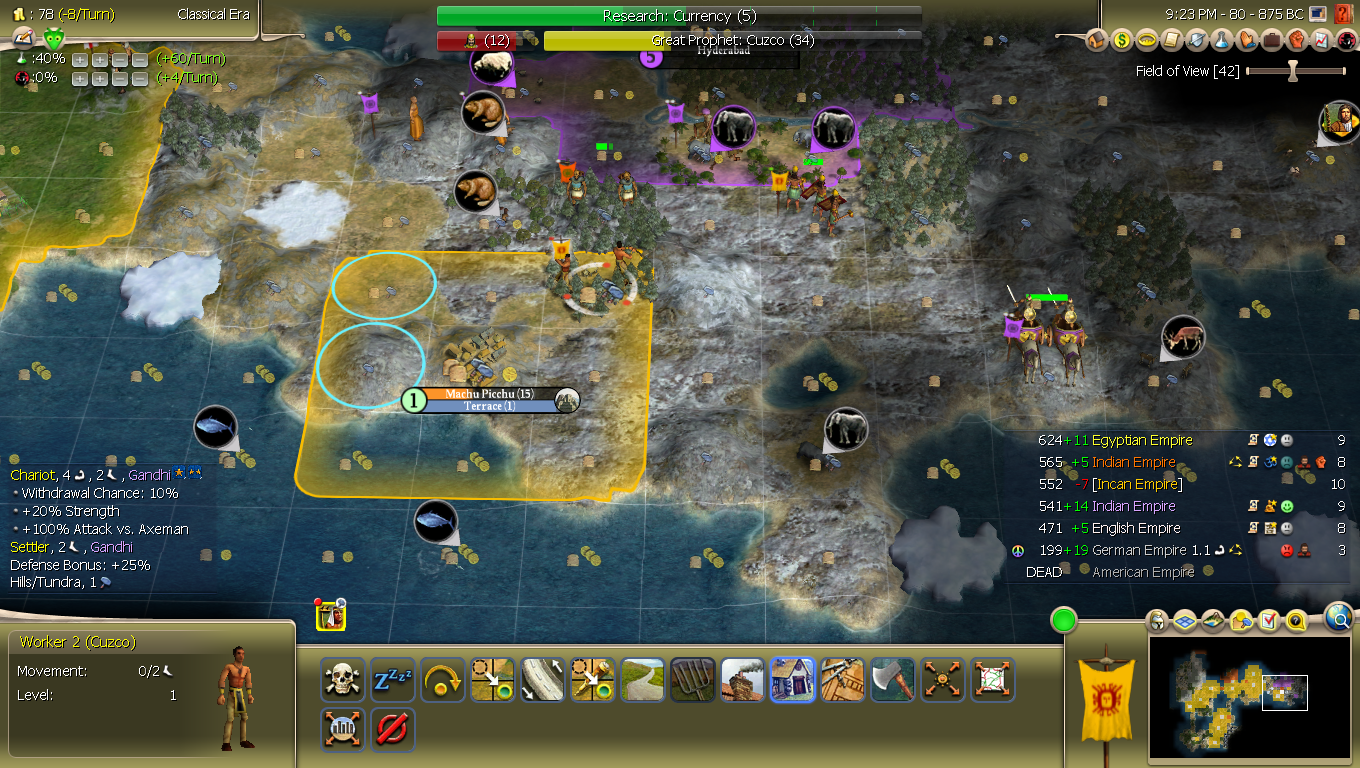 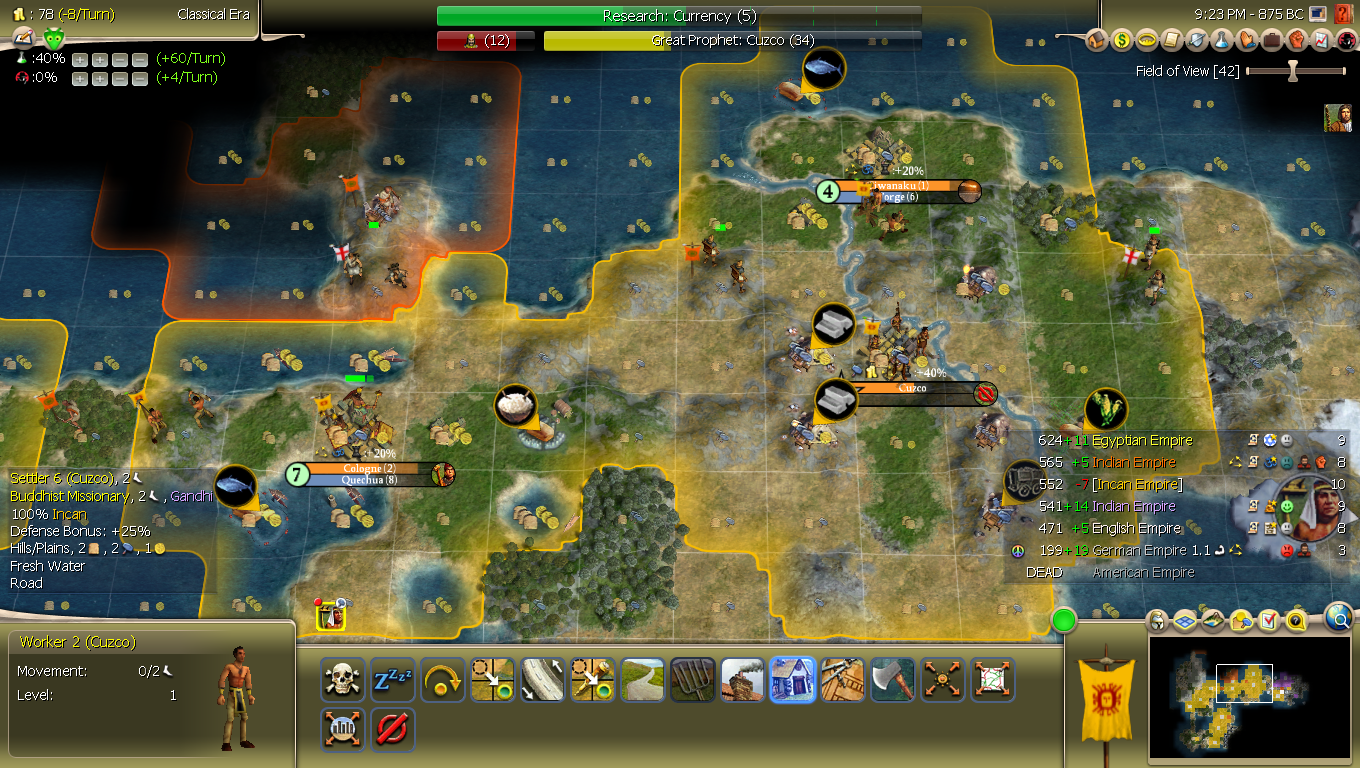 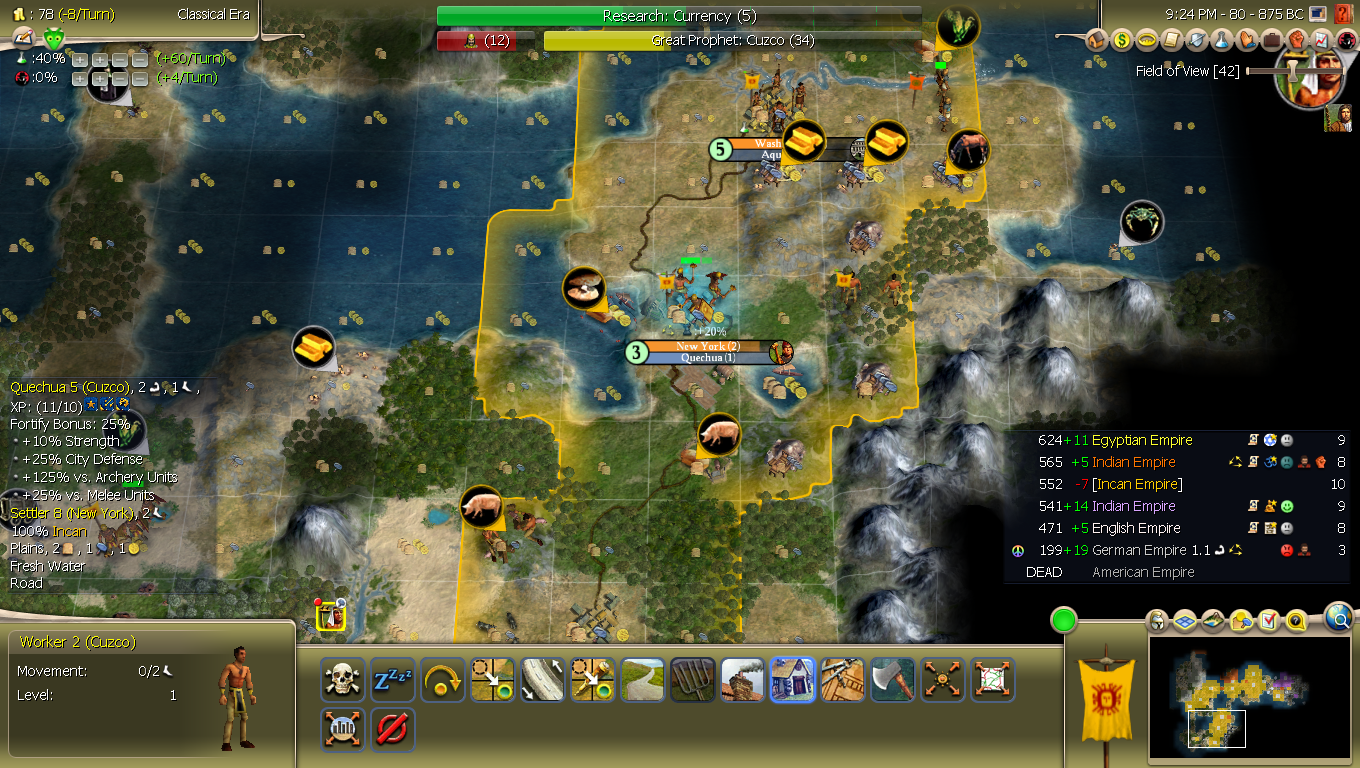 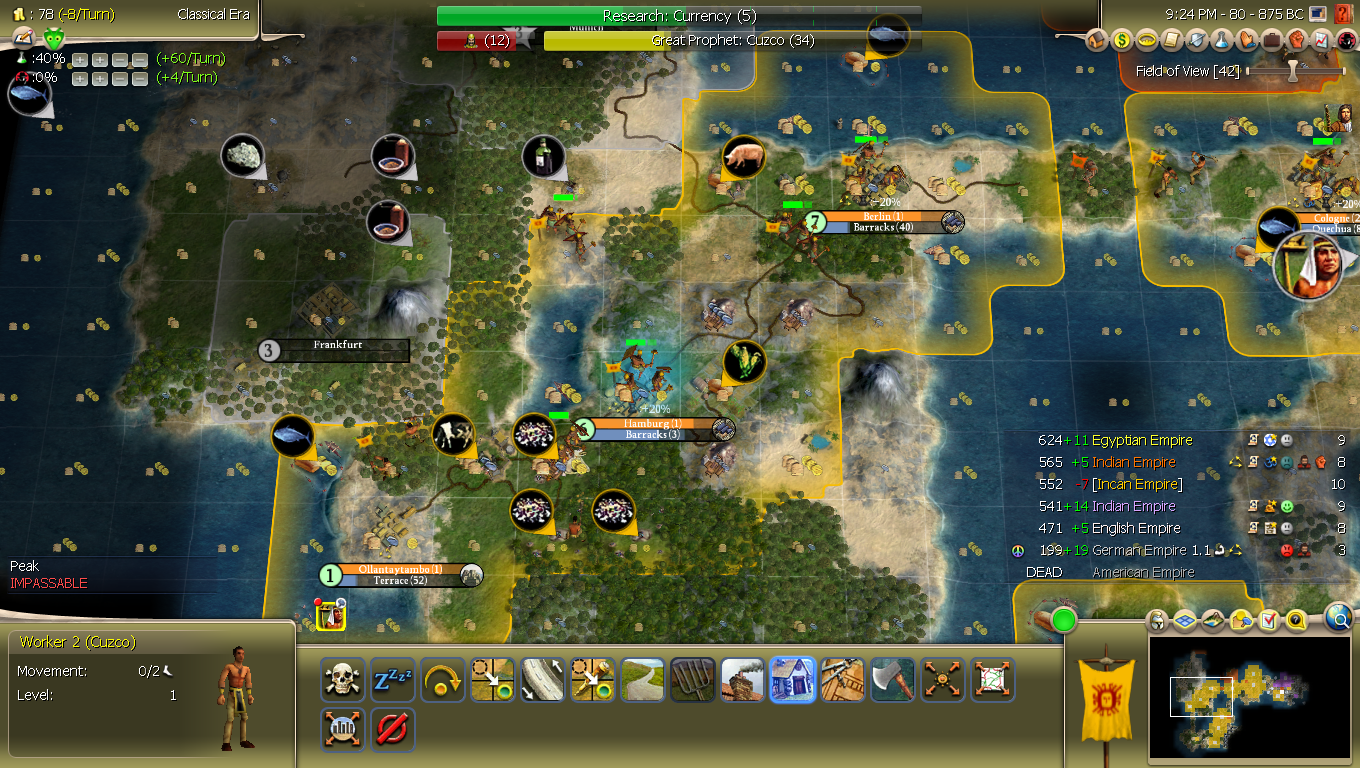 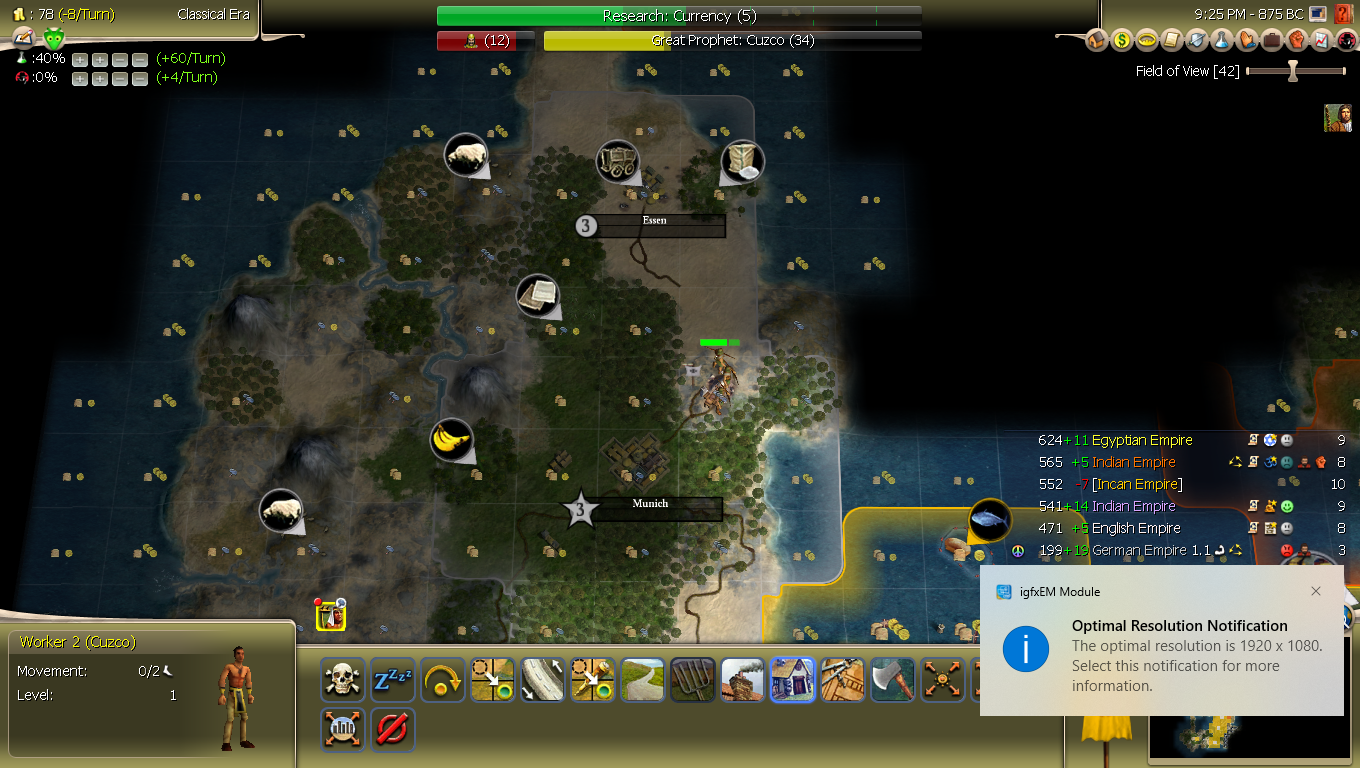 (Contender save)
SIP and started building quechuas working the 3P tile. Stole a worker from the Americans and once I had enough quechuas dowed again and took his two cities. I was very lucky and took very little losses. Germany didn't have any strategic resources yet so I proceeded with the conquest and took 3 more cities. By the time the quechuas reached Munich and Frankfurt they'd built walls so I sued for peace. I had the chance to conquer Essen and if I'd had map knowledge that it was settled on iron I would have prioritized it more as it would make conquering Germany later a lot cheaper with just cats/quechuas.

Wonder wise, built the Oracle in Cuzco in 1440 BC (got MC), the GLH in Washington 4 turns ago in 975 BC, and just started building the aqueduct for HG.

Looks like Asoka is plotting against me. He's angry from the -5 relations from "you declared war on my friend"

Currently on 10 cities (and 8 workers), just finished building 3 settlers, and about to revolt into hereditary rule. Unfortunately I wasn't fast enough to secure the elephants + deer site near Ghandi and he's about to settle nearby. Maybe worthwhile to settle 1S of the ivory just to secure the resource. My plan if I continued was to go for construction next and then start building cats while teching HBR for war elephants. And then to finish off the Germans and then dow someone else. Though thinking about it more maybe it'd be better to leave the Germans alone and just go straight for Asoka.
Having access to cheap forges + gems, gold, and silver, plus fur, ivory, and wine for +9 happiness is an insane boost so early in the game. I guess it will enable a lot more whip anger buildup for big armies to take out Asoka quickly.

Overall I'm surprised how well the quechuas have performed. Just from settlers alone I'd be at 16 cities by 1AD (+ more if there's land to settle to the SE of side of the American mountain pass) and having at least a few more than that seems easily doable with a 2nd German or an Indian invasion.
Last edited: Sep 27, 2022
You must log in or register to reply here.