As I close in on the end of my Civ 2 total conversion scenario/mod treasure hunts and site archive searches for good stuff to showcase in my Civ video series I've come across something very old and probably very lost that was incomplete yet I just couldn't throw it in the trash as there was something special and unique about it.

It's a 1997 modpack zip called "Dedworld" that I found it in the Apolyton file archives for their predecessor site The Ultimate Civilization 2 Site. It's archived download is here:
https://web.archive.org/web/19980421024425/http://civ2.gamestats.com/modpacks/dedworld.zip

There's no info on the Apolyton or UC2 pages where it's accessed and there's very little documentation inside the zip but I can see it's full name appears to be 'Dead Worlds Modpack'. In a weird renamed rules file it says mods done by "Luka Rejec & co" so I guess that's the author since in a very small credits txt file it does not specify the creator and merely thanks some sources ie it thanks Mike Kennedy for sound files (which are missing lol), Jeff Head for highways and monorails, and Micheal McCart's Allterrain.gif file for rivers and coasts. Presumably the rest of the terrain was then made by the author and it looks great! Nothing mind blowing of course but pretty darn good as far as classic Civ2 alien world terrains go. I've seen thousands of scenarios & mods now including many alien world ones and I cannot recall seeing this terrain set before so that makes it quite unique.

There's no scenario file but it does include a map called Iapetus, which is a moon of Saturn. Which makes sense as the map and his terrain does match the surface style and colours of the real rocky & ashy Iapetus world!

The author renamed a handful of techs and units but sadly there are no actual custom units or city graphics so you're literally just walking about on an alien world with half naked warriors in thatched huts lol. His renamed rules file is broken too and it took me friggin half an hour to find and fix the problems lol.

Perhaps the lack of great content to go with the terrain and the bugs rendering it unplayable plus the closing of the old Ultimate Civ2 site when it merged into Apolyton is why his modpack and terrain just disappeared seemingly to never be played or even used by anyone else in their scenarios.

This terrain set and map is too damn cool to disappear and it's half a miracle I even clicked on it as I was actually browsing in those archives looking for other stuff lol. So I figured I'd fix it up, convert to a scenario, and stick it on CFC to preserve it properly. However I don't have time to go and add yet another new scenario project to my list of unfinished ones so I figured the quickest easiest way was to just merge the classic Microprose Mars Now! scenarios sounds, units, buildings and techs with this one as they fit together perfectly! I kept his nations and rulers though (think I saw Pamela Anderson somewhere in there

) plus his terrain names too of course. I also used the above picture of Iapetus as a title.gif file and saved my test game as a scenario file. Figured I'd call it "Deadworld Reborn" haha.

It's pretty much ready to go.. my only query preventing me from releasing is that I notice there's no water whatsoever on his map which is accurate lol, but I'm worried that will cause issues. I can easily slap a patch of irrigation down next to all starting cities to solve one of them however I'm more worried about pirate ships. If you're playing on a map with no water whatsoever does civ2 crash when it tries to summon pirates? I know I've read that somewhere but might just be thinking of Civ1 custom maps. If one of the Civ2 guru's here can let me know if that's a legit issue or not that would be great thanks. Otherwise I'll just release it now as is!

EDIT: I guess setting the Barbs to villages only is another idea to stop sea pirates if needed although I'd prefer to leave Barbs on. 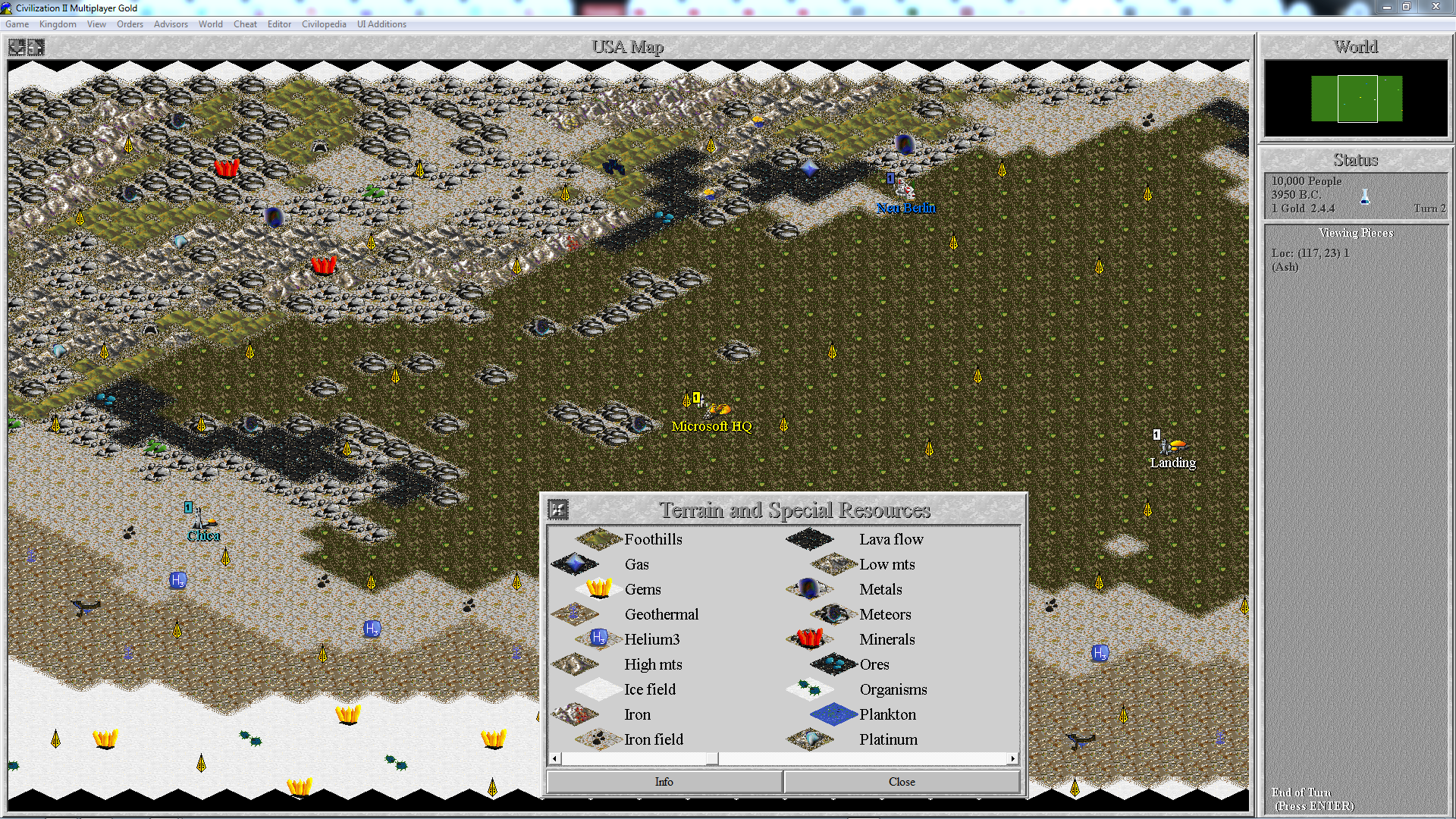