Those following my Civ2 preservation work and lost scenario search threads would know that I've been hunting for a long time an old long lost Starcraft scenario and that I finally managed to obtain it recently via the Dustin Dunns Civ2 collection donation.

Now that I can finally test it out I can see that aland007's Starcraft Terran War scenario was an interesting project with a number of unique changes designed to make the scenario 'feel' more like Starcraft. For example terrain now gives next to no shields forcing you to mine vents & crystal special resource spots like in the original game. Technologies and buildings have been heavily modified and reduced, however the biggest change has got to be his units system where every single unit appears to only have an attack & defense of 1 while their firepower and hitpoints have been massively increased instead resulting in much longer firefights that feel and sound more like Starcraft too. Balancing wise I'm not sure if that really works in Civ2 as by making everyone 1/1 you're really playing a game of chance even if your top units deal more damage and can take more hits eg I attacked a Goliath with a big Terran Battlecruiser space ship and I lost due to me constantly losing the game of chance, but nevertheless it's another thing that makes this scenario feel unique.

It's a pure Terran vs Terran (7 different human factions) scenario so no Zerg or Protoss sadly, however the bigger disappointment is that it doesn't have any custom terrain other than the special resources which really kills the designers intention of giving that true Starcraft feel. 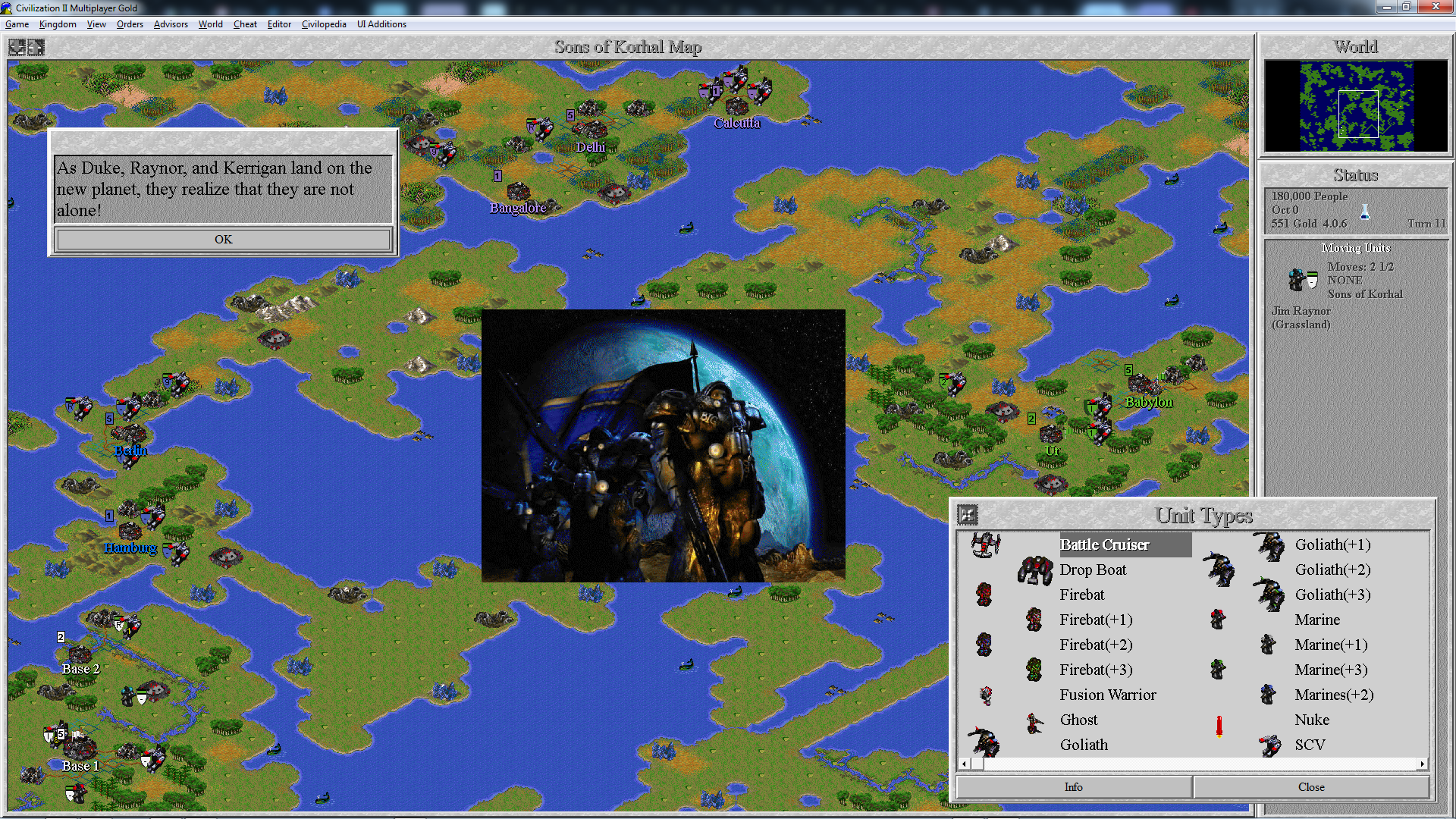 I thought about doing a full terrain overhaul myself using authentic exported Starcraft 1 graphics however I deemed that too much work as I've already got enough projects to finish. However then I remembered something in that years ago @Catfish had started a Starcraft scenario for Test of Time that looked really cool in his teaser shot but he sadly never finished it. He did however release his terrain files that included some ripped Starcraft alien world terrain which you can see demonstrated in his screenshot here:

Sadly he didn't release his units although I think I saw Catfish post on CivFanatics that the screenshot units were faked anyway. However sure enough in his terrain download there were all the lovely terrains he'd ripped along with some other cool ones.

Similar to when I overhauled MaTT_SMiT's Warcraft 2 scenario with AltF18's Warcraft 2 graphics, this all got the cogs ticking in my head in that while I don't have time for big projects I am happy to make time for quick and dirty ones if almost everything I need is already there so I figured why not add Catfish's Starcraft terrain along with a few other graphic tweaks into aland007's Starcraft scenario in a quick addon pack just for fun!

Being a quick and dirty job it's far from perfect but some people might like it or take it as inspiration to do something better. Simply extract the addon files in the 7zip attached to the bottom of this post into aland007's Starcraft scenario folder and you're good to go. It should now look like this... 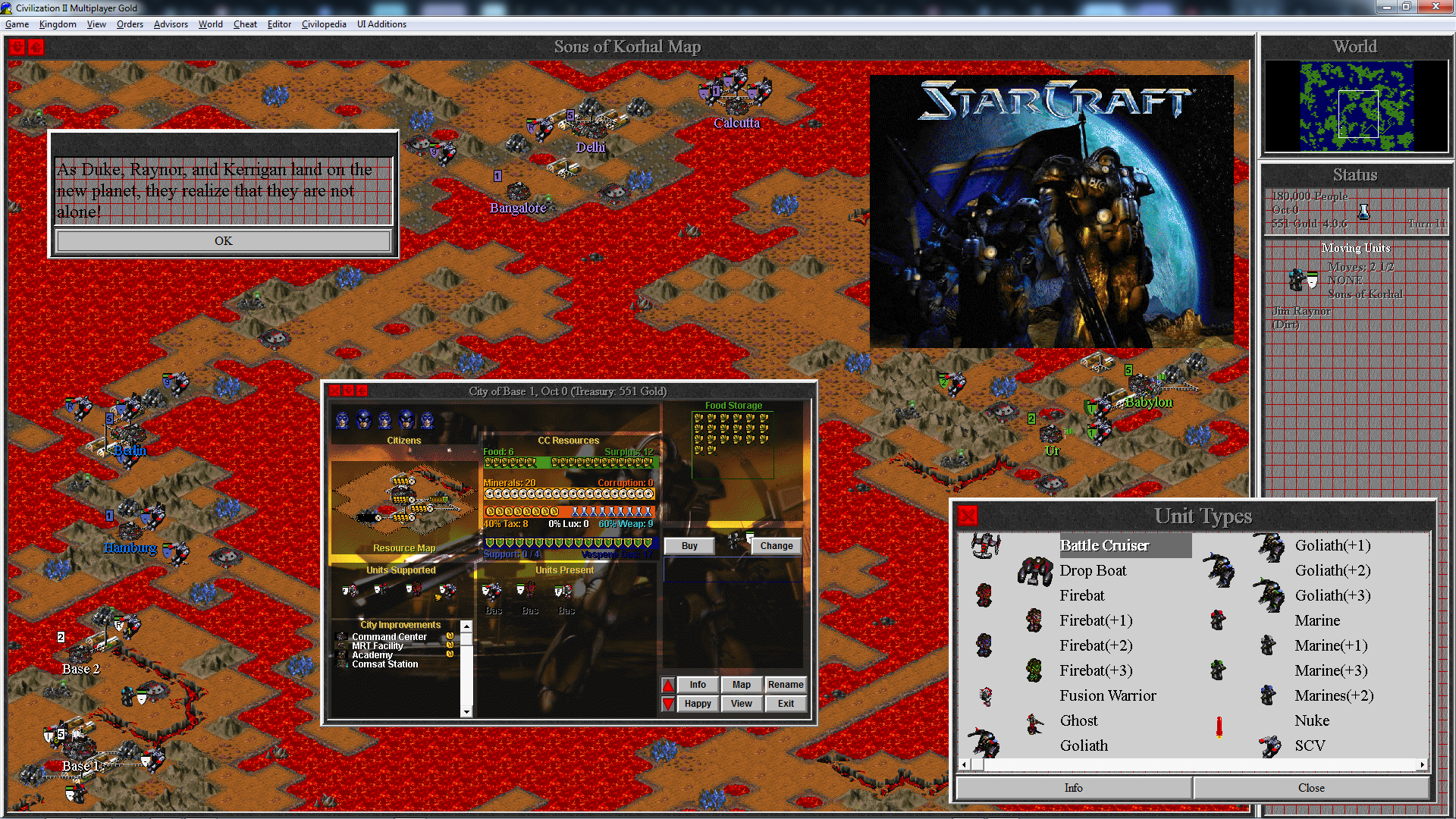