This is the thread where you tell us how you did - win, lose or retire.

Only read or post in this thread when your game is ended and successfully submitted.

Game never stopped at 20k. I lost to space race when I had over 70k culture
T

you are aware that it requires 20k IN ONE CITY, right?
t_x
The perfect is the enemy of the good. - Voltaire

This is because only *you* are obliged to win by 20k, by the house rules so to say, or this XOTM ruleset. The AI can win any way they want, as they do not participate in the XOTM game.

To answer your question from the Pre-game discussion: The start with "almost" perfect for a 20K game.

Thanks a lot, it was a nice game, I missed only 4 Wonders. The best capital location was quite obvious to recognize, and when you moved to it, you were later rewarded with iron and coal, excellent.

Why only "almost"? Well, with one more BG Trondheim could have been brought to 200spt after Nuclear Plant. As it was, it was only 199spt

So I had to rush a worker for 80g and then build 2-turn Armies (after every culture building was built). A difficult challenge was provided by the fact that we were quickly boxed in by the Greeks of all. So "initial" expansion had to be delayed until much much later, and peaceful relations had to be maintained at all costs.

In the end I reached 20K in 1585AD. No idea, whether this is good for this start. I tried a somewhat unusual strategy this time, not going directly for the GLib, but doing the Great Wall instead to trigger my GA. During GA I had 40spt and was able to complete GLib, Hanging Gardens, Cathedral and University (with part rushes). Without that GA, I would probably have lost one more wonder (like GW or HG) to the AI, but of course the drawback was to get the GLib a bit later.
Current PBEMs:
No Treasure for Pirates (England)

i want to see that picture of that 199spt-capital, please!

t_x
The perfect is the enemy of the good. - Voltaire 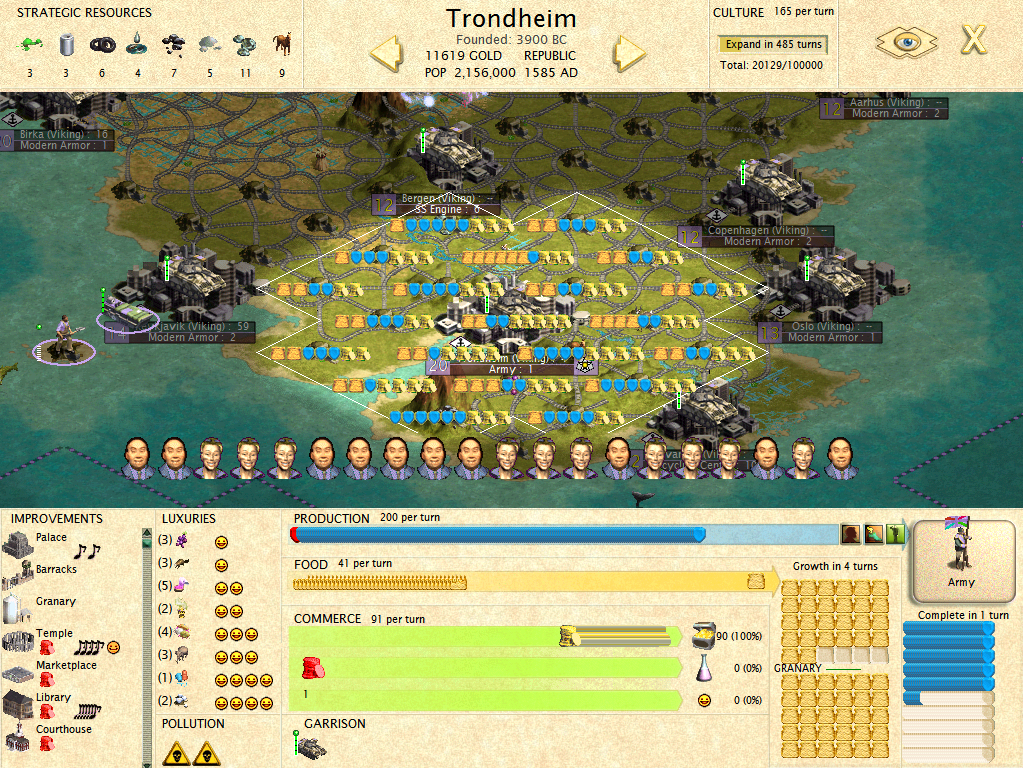 In my scaling of the heights I usually failed to leave the floor. - Chris Knox
C

Well, I didn't see where I should go until I'd settled in place, so I did 20k in my second town. I didn't bother to abandon Trondheim, so Bergen never worked that one tile. Being much slower than Lanzelot, however (I finished in 1792), I ended with 220 shields in my 20k town since I built a manufacturing plant and a nuclear plant. I did nothing with them though as I'd run out of stuff to build - it was just for fun.

I was sure at several different points that I was going to lose, but, although the AI researched very quickly for monarch, they managed their wars really badly and I managed to squeak through each time. Eventually I got a bunch of land from the Iroquois and things got more comfortable. Then it was just a matter of finishing by the deadline, which was complicated by a war declaration with 5 turns to go.

I haven't played PTW in ages - I thought I'd lost my CD - and I could tell I was out of practice. I'm hoping to find time to play on a more regular basis again, so maybe I'll be able to join in in a few more GOTMs.

I did find the sweet spot, but not the time to finish... Nice game design!
M

The World is mine

So I had to rush a worker for 80g and then build 2-turn Armies
Click to expand...

Mined the Cow every 2nd turn?
Civ3- The End is near
You must log in or register to reply here.