This seemingly 4X-game (or is it a strategy game?) was just showcased (cinematic trailer only) during the Xbox showcase.

The website isn't reachable at the moment, but another 4X game on the market is always good. Not sure this one is one though... What do you guys think? Did anyone see this yet?

From the website:
Build a nation and lead your people throughout history to the pinnacles of human achievement as you explore new lands, develop arts and culture, conduct diplomacy, and go head-to-head with your rivals to prove you are the greatest ruler ever known.


Featuring both familiar and innovative gameplay mechanics, Ara: History Untold delivers an evolution in historical grand strategy with no pre-set paths to victory, leading to endless possibilities. Your choices will define the world you create, your experience, and your legacy.

The Gangster of Love

A brand new Civ clone from former Firaxis developers called Ara: History Untold was just announced at the Microsoft Showcase. It’s said to be a Turn Based Strategy game about human history with elements of Civilization and Crusader Kings made by the team behind Ashes of the Singularity. I’m excited to learn more.

The Ahistorical Representation of Religion in Civilization V

I wonder if character-driven 4X games are going to be the new norm.

There's an 'insider program' later on in the article, I guess it will be like Humankind's public play-testing.

https://www.arahistoryuntold.com/media/
Also some gameplay screenshots here. I'm not sure what to make of it right now, but I'll definitely watch this game as it gets developed.
You shouldn't ask yourself such worthless questions. Aim higher. Try this: why am I here? Why do I exist, and what is my purpose in this universe?

Hmmm. Made by the same people who did Ashes of the singularity. We could do with some good games in the 4x area. The best in recent times have been the heavy complexity games like crusader kings. But I find them a bit of a chore and too much hard work to get into.

Isn't it Shohreh Aghdashloo speaking in the trailer?

I guess that's it for my hopes of having her as the Civ7 Voice. That's making me sad tbh.
Come on Firaxis! I want her more than anything in Civ7!! I really hope she's only in that trailer, but not in the actual Game so that we still get a chance to have her

. SO,... Firaxis..., just focus more on those Great Actor Points and you can grab her!!

Sean Bean is legendary and never gets old, but if you ask me what Civ7 would need to have to make it stand out from the other titles, then I would choose nothing but Shohreh Aghdashloo as its Voice... no spherical Map, no Battle Maps, no changable Leaders per Era, Nothing but her. I mean, just listen to her voice in that Trailer, her voice alone made that trailer exciting to watch, like a wise woman who won't just follow you on your Journey rewriting History, but also as your wise Advisor guiding you through it. In other words, her Voice alone sounds like History, with which she would make the Game so much more Immersive.
Ready for a different Civilization VI Experience? with a different and more challenging Gameplay, deeper and interconnected Game Systems/Mechanisms,
and a bunch of new Features that make the Game more Interesting and add replayability to it? Then you should definitely look out for the upcoming Civ VI Mod Series:
4Xpansion Pass [4XP]
~~~~~~~~~~~~~~~~~~~~~~~~~~~~~~~~~~~~~~~~~~~
My Steam Workshop Mods for Civ VI: Zegangani Mods​ 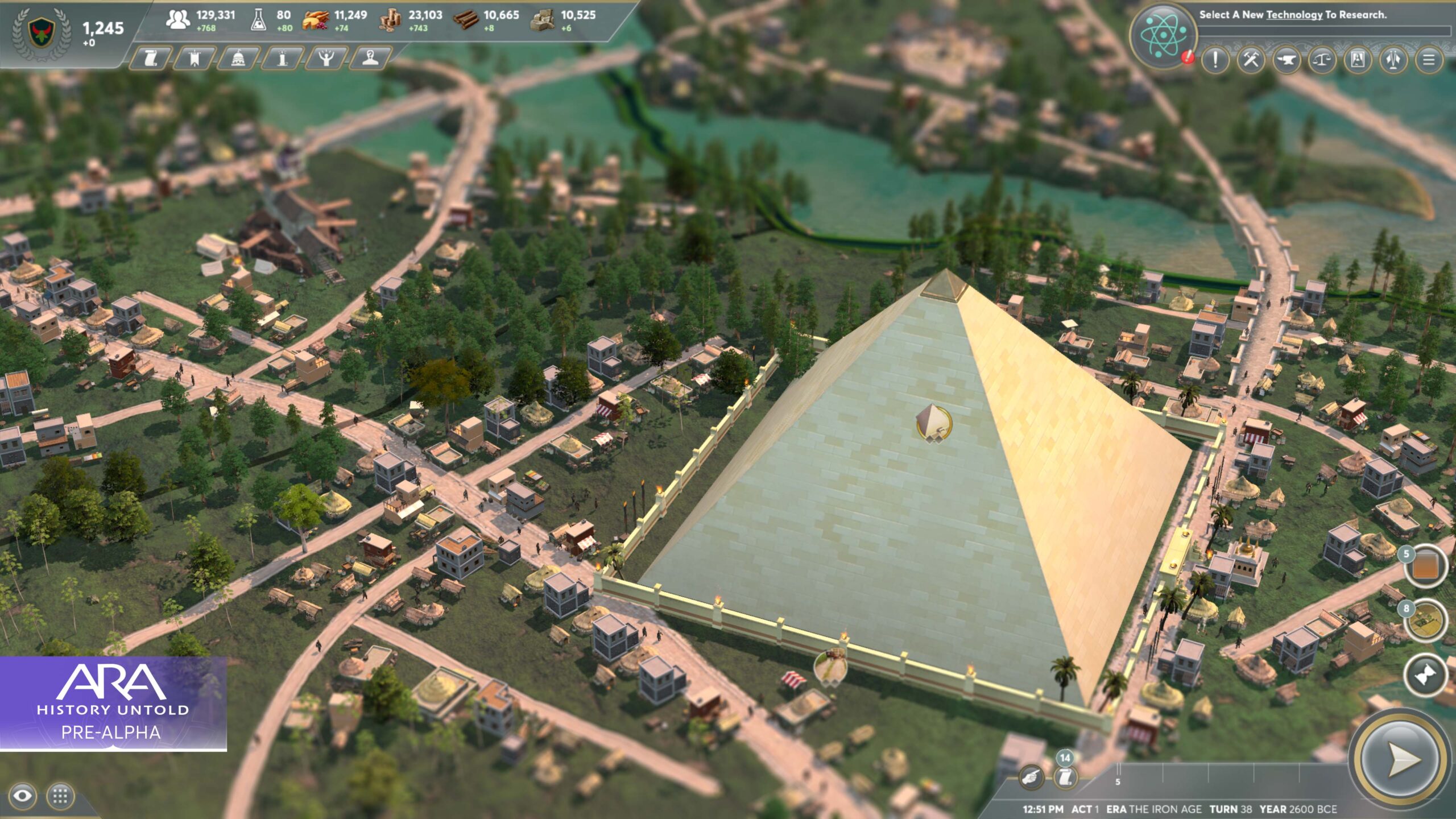 is that not an XBOX title?

I posted this thread yesterday after the announcement. I had no clue such a thread was allowed to be opened in the Civ VI forum so I opened it in the "other games" forum (which I still think was the right move tbh).

@The_J Would it be possible for you to merge the two threads?

Zegangani said:
Isn't it Shohreh Aghdashloo speaking in the trailer?

I guess that's it for my hopes of having her as the Civ7 Voice. That's making me sad tbh.
Click to expand...

That's really interesting. I immediately recognised her voice as well, and my first thought was "Wow, why would you pick her voice as a voice-over, it's so hard to listen to in such a context". Then I made a leap in my brain to hear her voice in contexts such as reading out quotes in Civ, and I was really suprised why anyone would like that. But, I had the same with the voice actor in Civ V, that always sounded like a garbled mess in my opinion too. I liked Sean Bean's diction, but I hated the quotes they wrote for him to use.
Lyset tok slutt, og stjernene slokna; Før fylgjet nådde fram til gards - Men eg hugsa vegen

Vandlys said:
I had no clue such a thread was allowed to be opened in the Civ VI forum so I opened it in the "other games" forum (which I still think was the right move tbh).
Click to expand...

The trailer shows precisely nothing, but it’s really nice to see this renewed development in the 4X genre.

“Elements of Civilization and Crusader Kings”, eh? They will have their work cut out to do better than Old World

I’ll be very interested to see how they reconcile character-driven gameplay with their millennia-spanning premise. Old World really benefited from a more focused time period.

My vote for Civ 7 narrator goes to either John Noble or Cate Blanchett. I leave it entirely up to Firaxis who they want to pick, but it has to be one of those two. Or both.

As for Ara, there's not really much to go on yet. At first glance, the map doesn't look that enticing to me personally...we have some close-ups of cities, and one zoomed out view which shows what appears to be a region system of some kind. It's still a long way off release though, and since the details are all unknown, I'll reserve judgement until I have a better idea about how the game will play.
X

For someone interested in history, it would be nice with a bit more mature approach than Humankind and civ6. But as it’s an xbox game, I guess we have to accept console level of depth. I would be VERY surprised if this is good. I do, however, welcome any competition for an otherwise stale genre.

So this is NOT a PC game?

bene_legionary said:
I wonder if character-driven 4X games are going to be the new norm.
Click to expand...

Well, players seem to want some kind of narrative to be created. That was at one time desired via more comprehensive systems for diplomacy with other nations as well as having internal factions, a la Endless Space (granted, it doesn't do too good a job with it) .

I think developers are finding that event systems are an easier way to satisfy narrative-seekers. It's random tactical decisions rather than something systemic that has to be consistently effective.

It's generally nice to have some new entries in the genre, especially if they bring new approaches to the table. At the moment, we have two games which have done this, Old World and Humankind. Both these games have their merits and bring something new. Humankind has its cultures, the neolithic era start, and a unique scoring system. Old World has the character system, families and the orders mechanic. It also has a scoring system, albeit not as involved as that of HK. Both have a different way of placing and developing cities compared to the Civ series, and both do combat differently.

It remains to be seen if Ara will bring something new to the table.

Kaan Boztepe said:
is that not an XBOX title?
Click to expand...

Microsoft’s game development studio has been called Xbox Game Studios for a few years now. They develop games across all platforms.

This will almost certainly be a PC game - look at the UI mock-ups in the promotional screenshots. It may be available on Xbox consoles as well, but that is not necessarily the case (see Age of Empires 4… also published by Xbox Game Studios).

Sherlock said:
So this is NOT a PC game?

It will be probably cross-platform, Microsoft pushing XboX forward.
My guess on ARA is "alternative reality advancement".

I saw JumboPixels video, showing also some insider description, but they look boringly generic and cliche. I was not really interested.
King player in Civ6

Anyway, I got burned by Humankind, rather waiting for Civ VII then get hyped by Ara.

The Gangster of Love

Eventually one of these Civ clones will finally take the best name possible: HistoriCities
Medievalists.net: The Middle Ages in 4X Strategy Video Games

The Ahistorical Representation of Religion in Civilization V

The Hub City Review of Sid Meier's Civilization VI
You must log in or register to reply here.

Explorminate: Our Favorite 4X Games in Development in 2022

Early access: Terra Invicta, a 4X where you have to resist an alien invasion