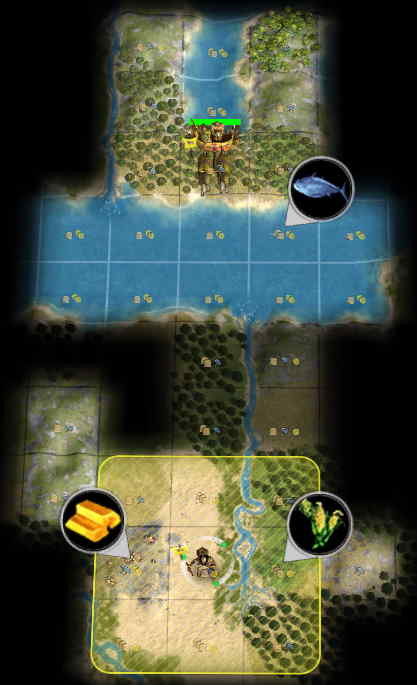 Reading Requirements
If you are participating in BOTM 242, then you MUST NOT read this thread unless EITHER

Contender Save. I settled in place, then built Memphis on the hill at the river mouth and Heliopolis on the island, between horses and two clams. I didn't use my war chariots for any early wars, opting for peaceful early expansion. By 1 AD, I have nine cities. No wonders--someone beat me to the Oracle in 1240 BC.

I am not doing as well as I would expect on Prince. Don't have access to my save rn, but seems that my game was very similar to @MarleysGh0st so far: SIP, a coastal city on the hill, a horse island city, chariot pretty much useless so far (other than scouting), no wars yet, not sure where to go with this game - although an unusual start was a lot of fun

When I began to scout with the chariot, since the island looked like a B, I thought that @DynamicSpirit might have put island resembling B,O,T & M into the inland sea

In terms of stupid mistakes, I really wanted Montezuma to trade me something so I agreed to his demand to stop trading with Mansa. Monty continued to hating me (even when I adopted his religion, we never went above cautious), but Mansa also has been hating me and refused to trade, in spite of later attempts to suck up to him ... ;( also didn't get Oracle.

I also expanded rather peacefully, after having SIPed. My 2nd city went to wheat/cow/silver before settling the 3rd on the coast, although it went close to Zara at cow, crab and stone to secure the latter and to cut him off a bit. From there settled the island and other coastal cities. Unfortunately one of my last cities which was more inland got razed by an unexpected barbarian popping out of the fog while I did not have a unit near enough to do anything about it. Resettled it and got a barb city in exchange. At 1 AD I'm at 11 cities and 49 pop, 10 workers. I got the Oracle for CS, Great Lighthouse and Great Library, other wonders being built right now include Pyramids, Colossus and MoM. I guess that means I'll head to space once again.

Tech is up to CS, Calendar, MC and Music.

Settled 1S to leave more space for northern city. The northern island is nice with potential for both a HE and NE city, settled my 3rd city in the production powerhouse spot on the west coast of of the island with horses, copper and several grassland hills. There is plenty of land, so expansion is peaceful so far with 12 cities at 1AD.

Challenger Save. I settled in place and expanded north to the island, and then west.

Mansa kept on teching everything except Archery and started with Warriors, so I invaded him 1st which I don't usually do.
The immortal AI can build a Skirmisher in 1 turn as soon as they tech it. Keep forgetting that.
Mansa still died with only 1 city hehe.

At 1AD currently working on Zara.

The 4 warmongers will be a tougher nut to crack.

Will probably attack them from the coast somewhat.
Been a while since I played inner sea map.
Kaitzilla vs. The World
The Largest Civ 4 Deity playthrough in history!​
You must log in or register to reply here.