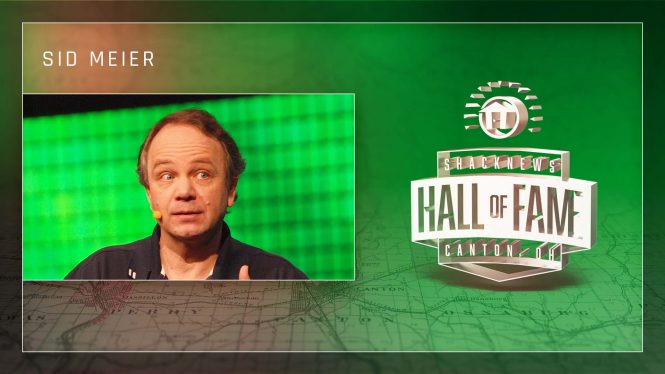 Shacknews has published their 2021 Hall of Fame, which includes games, companies, and also people. One of the most important ones, obviously, Sid Meier!

Millions of players know Sid Meier as the father of the Sid Meier's Civilization series of turn-based strategy games. That only makes sense: His name is in the title. But Meier started on a different path, programming flight simulators for his business partner and MicroProse co-founder William "Wild Bill" Stealey. After designing several flight sims, Meier needed a palette cleanser. He developed Sid Meier's Pirates and Sid Meier's Railroad Tycoon, both simulation games. His next game was Sid Meier's Civilization, which he co-designed with Bruce Shelley. While Meier consulted and produced future installment in the Civ series, he was not involved as co-designer. He designed Sid Meier's Alpha Centauri and Sid Meier's Colonization for MicroProse.

After leaving MicroProse, he co-founded Firaxis Games with fellow developers Jeff Briggs and Brian Reynolds, where he served as producer on games such as Sid Meier's Civilization Revolution, a console-, mobile-, and handheld-friendly version of Civ; and consulted on the 2012 reboot of XCOM. He continues to develop special projects such as a game engine and remains a powerful influence on the direction of strategy games.
Click to expand...

He is joined by other notable people, like Nintendo's Shigeru Miyamoto, John Romero, Lord Babbage and Lady Lovelace, Lord British, and others.

Before railroads and pirate ships, Sid Meier built a reputation as an ace flight sim programmer. His desire to explore history and what-if scenarios led him to the concept of a strategy game where players rewrite history, one turn at a time.

Players started with a settler and spent hundreds of years building grand cities full of wonders, military bases, scientific achievements, and financial institutions. Victory was achieved by sending a space shuttle to Alpha Centauri or conquering the other civilizations controlled by AI or human players. Either option demanded a head for tactics, navigation, and resource management.

Sid Meier's Civilization was and still is one of the most influential strategy titles ever made, inspiring several sequels and defining the turn-based genre for decades.
Click to expand...

Civilization 2 (or "Civ 2" to diehard followers) emulates the advancement of human civilization, like its turn-based predecessor, but introduced more options and finely tuned balance.

Brian Reynolds headed the design team responsible for creating deeper combat and more expansive diplomatic and trade options during play. More options and better balance has made Sid Meier's Civilization II one of the most popular entries in the long-running Civ franchise, a mainstay in any list of the best and most important strategy titles, and one of the best multiplayer games regardless of genre.
Click to expand...

Also here we are in good company, with games such as Command and Conquer, Diablo, Tomb Raider or Doom.

Have a look at the article, to read about more famous computer game items