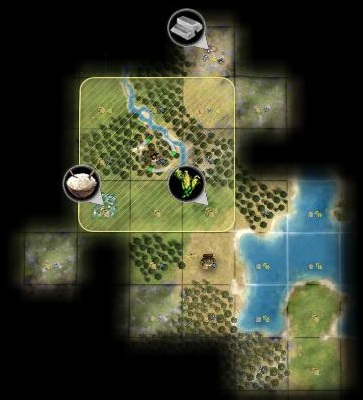 Reading Requirements
If you are participating in BOTM 243, then you MUST NOT read this thread unless EITHER

But that didn't really matter in this game. It was brutal, but not the way I expected. I clearly overestimated the emperor AI on this small map. One thing that helped a lot was that none of the AI's had easy access to metals.

Settled on the PH 1E of starting point and changed to Police State civic. Researched Mining+BW and found copper inside the FC. Built some impis and settlers to create a core of 4 cities and pillage the AI lands and slow down their expansion. Impis are extremely good at this because of their 2-move superpowers even in forests and hills. And as long as the AI doesn't have axes, the impis rule the land. The pillaging was so effective that Toku only built one city, Ragnar only two, while Genghis and Monty both got to four cities. Main attackers were horse archers with some impis to clean up wounded defenders and defend against chariots. I captured first Tokyo, then Ragnar cities and Genghis cities. For some reason Genghis was more aggressive and sent a couple of small stacks towards the east. They were easy to kill in the open and after the Mongolian cities were less well defended.

@1 AD Toku, Ragnar and Genghis are dead and Monty has two cities.

It will be interesting to see if someone has taken the challenger save. I now believe it could be winnable by some of the expert warmongers we have in our community.
L

I took the challenger save and took a mostly peaceful route. Made peace with Monty and Ragnar early on, though Genghis and Toku weren't willing to make peace until I defeated their invasions. I'm the main wonder builder with Stonehenge, GLH, Oracle (MC), and Colossus. Currently working on HG and working on settling some more cities to take advantage of the free pop. Besides Monty the other AI haven't expanded much and I'm first in score by a wide margin with 15 cities. Tech is a bit slow this game as nobody has alpha yet and I have a feeling things will get tougher for awhile as all the AI are angry with me but pleased/friendly with each other so they will benefit more from trading. Just finished researching CoL and thinking of going for CS next and eventually invade Toku (and then hopefully the rest of the AI) with macemen. 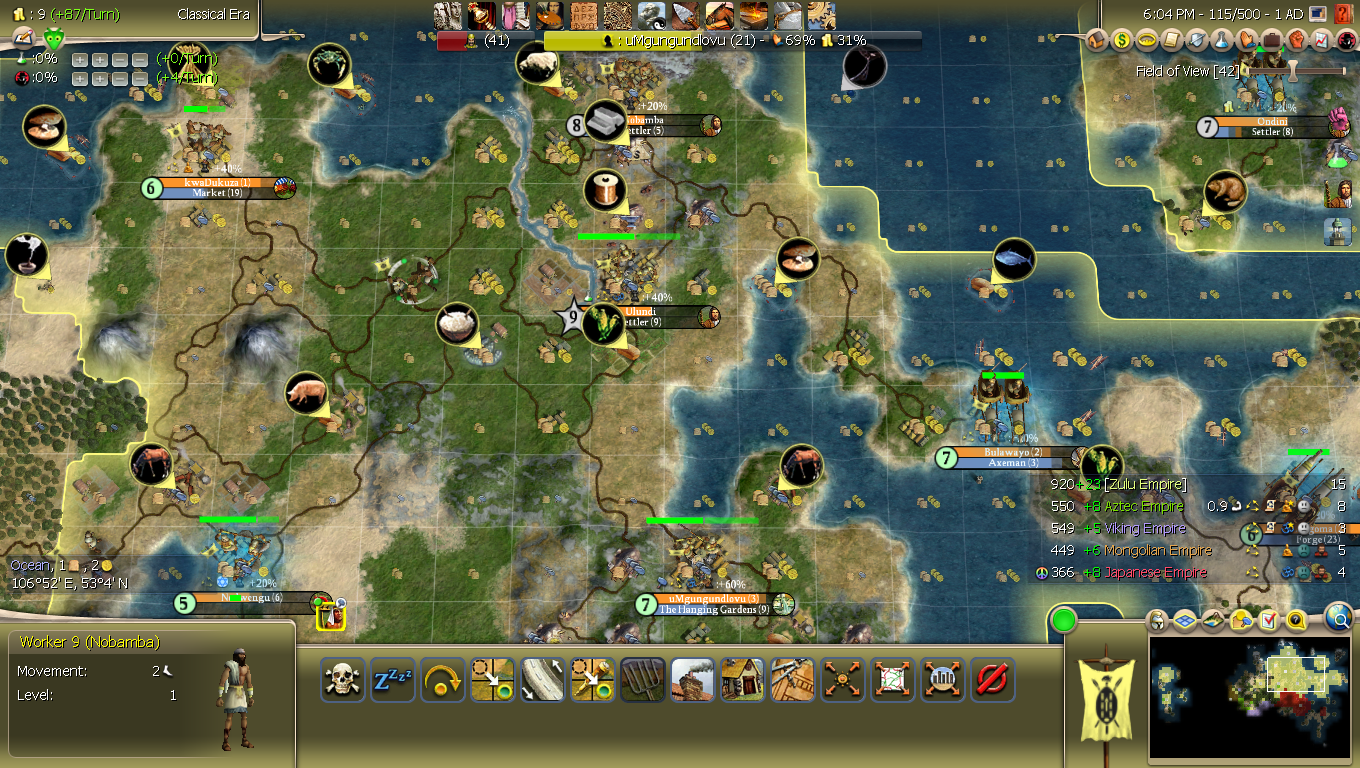 And if I don't hear from somebody having more trouble with this game, I'm going to have to stop worrying about making my games too tough.

Great game @Lich_Lord ! Did you use the Impis to stifle the AI expansion? In that case, they seem to be very effective also in your game.

MarleysGh0st said:
I am amazed!

And if I don't hear from somebody having more trouble with this game, I'm going to have to stop worrying about making my games too tough.

I think it's fine that it wasn't tough. The games should be fun for everyone and the better players can choose the challenger game.

Frederiksberg said:
I think it's fine that it wasn't tough. The games should be fun for everyone and the better players can choose the challenger game.
Click to expand...

I completely agree with you, particularly after playing some of the high difficulty game we've had this summer.

It's just that when I was play-testing this game, I got the impression that this was tougher than I wanted it to be, so I added some extra resources to Shaka's corner of the map. When I read these reports, you didn't need that silver after all!

Frederiksberg said:
Great game @Lich_Lord ! Did you use the Impis to stifle the AI expansion? In that case, they seem to be very effective also in your game.
Click to expand...

Not really. I sent one Impi at Toku but it died pretty early on to his archer swarm.

MarleysGh0st said:
And if I don't hear from somebody having more trouble with this game, I'm going to have to stop worrying about making my games too tough.

Well, I at least had a tougher time than Frederiksberg and Lich_Lord (as usual) but it's been pretty easy for Emperor. 6 cities and 33 pop at 1 AD, with the Oracle (for MC) and Colossus. I choked Toku because he really is good for nothing--at the moment he has 13 archers, 3 workers, and a settler bottled up in his one city, and I'll take it in 10 or so turns when I get a stack of catapults down there, and then turn them on the rest of my AI friends.

This game really was well suited for choking at least some of the other AIs as well, but that is not my way.

The small map (and faster game) is appreciated, MG.

Choking everyone also comes at a cost, and this strategy only makes sense if you are going for conquest or domination because your research is slow. @1 AD Writing and BW were my most advanced technologies, but the AIs were also backward because of the extensive pillaging done to their lands.

Took the Challenger saved game and am still alive.

Settled 1E on the Plains Hills square, in anticipation of having to defend my capital from enemy stacks, as is sometimes the case in an Always-War game. Yes, it was unfortunately 1 square off of the Coast, but in this kind of a game, survival comes first, instead of worrying about what might happen late in the game if a capital gets to be greater than roughly City Size 15.

I agree with Frederiksberg that we were extremely fortunate in terms of the relative lack of Copper and Iron Resources available to the AIs. Contrast that with BOTM 235 (Sury Deity), where metal Resources were way too abundant and it became a slog-fest that took too much real-life time to complete.

I forgot to switch to Police State! The game reminded me on Turn 2. Oops! Rather than lose a turn, I waited until I learned Bronze Working, and switched Civics together. It worked out just as well, though.

Wow, Copper in the big-fat cross, on a RIVER, with settling-in-place or on the Plains Hills square giving us a connection to it. Very helpful. The Silver Resource was essential to avoiding Strikes for a choking approach, which I used.

I played it mostly as an Always-War game at the start, but when some of the AIs started ducking out of their warring responsibilities, I eventually started handing out Cease Fires, but with sometimes resuming the wars reasonably quickly.

To keep the economy afloat, I had to build Cottages in every City which I built/kept. Still, I lose some Gold every turn and have to keep Pillaging or capturing/razing Cities or gifting away captured Cities to keep things going.

Ragnar was my most effective choke, with 1 Impi and 1 Woodsman II Warrior being sufficient to 1-City-Challenge him. The nice part there is a Multi-Religion Holy City, complete with Stonehenge to hopefully get him to build some Shrines for me.

Monte's Jaguar Warriors are the toughest Unique Unit that I have been facing, with them showing up unexpectedly at my Cities' doorsteps with Woodsman II + Combat I. For now, Monte gets some peaceful times as I try to deal with the menace that Genghis has grown into.

Mitchum's most-hated Building, the Monument, has had a place in nearly every City, as Religion has not spread to me, and Stonehenge went too early (plus, Stonehenge is going to a good cause of Shrine-Making). Being the first to tech a religious technology has also not been an option.

Lich_Lord certainly has a great-looking empire. My only Wonder was The Great Lighthouse, but it's a pretty important one on this map.

Things to watch out for:
An AI popping a metal Resource on a worked Mine
AIs using each others' Open Borders to sneak in Units close to your Cities without you noticing
Glory to Greece: All Trade Leads to Athens: Read my latest story, pick a role for yourself, and come join in on the fun! Current Games: G Major 152 Older Games: Competing VCs The Mole The Arena
You must log in or register to reply here.