***TODO: MODIFY NEXT SENTENCE IF YOU WANT TO INSERT ANY GAME-SPECIFIC TEXT***
Use this thread to tell us what happened in your game, particularly anything after 1AD

I continued to slowly expand in Antarctica and southern Africa. After trading for astronomy in 1400, I also claimed my share of the Americas. Given the theme of the game, I should have had Santa play peacefully, perhaps by gifting enough tech and cities to the AI to pursue a diplomatic win. But look at my screen name. It's Ebenezer Scrooge who gets to reform in the story, Jacob Marley is chained to patterns set in his personality long ago. For me, that means going for a military victory. But with relatively low production in this game, I delayed that for a long time.

In 1665, I declared against Saladin/Louis/WK. On the following turn, I bribed Frederick to join me in that war. As I concentrated on taking Louis' African cities, Frederick suffered terribly against the other two. After losing Berlin, he peace-vassaled to me in 1720. I finished conquering France in 1740 and signed a ceasefire. Meanwhile, Genghis and Hatty had been fighting a war that ended on the next turn.

I ferried reinforcements into Germany, before resuming the war against Saladin/WK in 1785. I captured Berlin and returned it to Frederick, then I started the invasion of western Europe. WK broke free from Saladin, then Saladin capitulated in 1828. WK did so as well, in 1838.

Having taken Seoul and Wonsan from WK, I suddenly found myself the last member of the AP religion, and it looked like it might be possible for Hatty win a religious victory. I couldn't have that, so Hatty became my next target in 1844. After capturing three cities, including Thebes with the AP, Hatty bent the knee in 1850 and that threat was gone.

The Portuguese War started in 1854. I took six cities, including Lisbon with an incredible 15 wonders, then accepted Joao's capitulation in 1862.

I declared on Genghis in 1864. Between capturing some of his islands and settling a couple more, I finally completed the Blessed Sea Quest, which I had been given in 1735. It didn't really mean anything at this point, but getting 20 of my cities converted to my Confucianism was nice.

(When I had been given the quest, it didn't seem worth the overseas city maintenance cost.) Genghis capitulated and game me a Conquest Victory in 1872.

Slow, I know, but perhaps it won't look too bad compared to the other non-Deity players.

After the slow start losing the CS sling, got another marvelous set back in the very early ADs when I lost my recently settled 5th city to a barb spearman who defied his 99.5% odds to succumb to my axe and razed the city in the process.

At least I landed the GLH the next turn. Expanded a bit further on the ice, but as soon as I got Berserkers set my eyes on Kushans in south Africa (maybe pre-settled? I saw those borders from accross the waters from very early on in the game). With the horses there, teched towards Guilds and then decided to make way in Eurasia through Portugal, who without a land bridge to Africa didn't think of expanding their 2-city empire until just before both those cities fell to the Elves. With our 4-move galleys kept pouring in units along the African coast until a north-south route by road was established. Next up were the Arabs who provided me with the mids. Meanwhile knights became cuirs and then cuirs became cavs, while adding Korea, Germany and Mongolia to the empire, in that order. Finally, the Egyptian core was annexed, leaving Hatty mainly with her Australian possessions for a somewhat leisurely played conquest win somewhere in the 1600s.Besides mapping the coasts, I completely ignored the Americas.

This was a game that encouraged peaceful expansion of the south pole and later southern Africa.

The barbs threw me for a loop at the start, and later I panicked a bit when the Attila the Hun (Massive Barbarian Uprising) random event activated.
I was not the target. 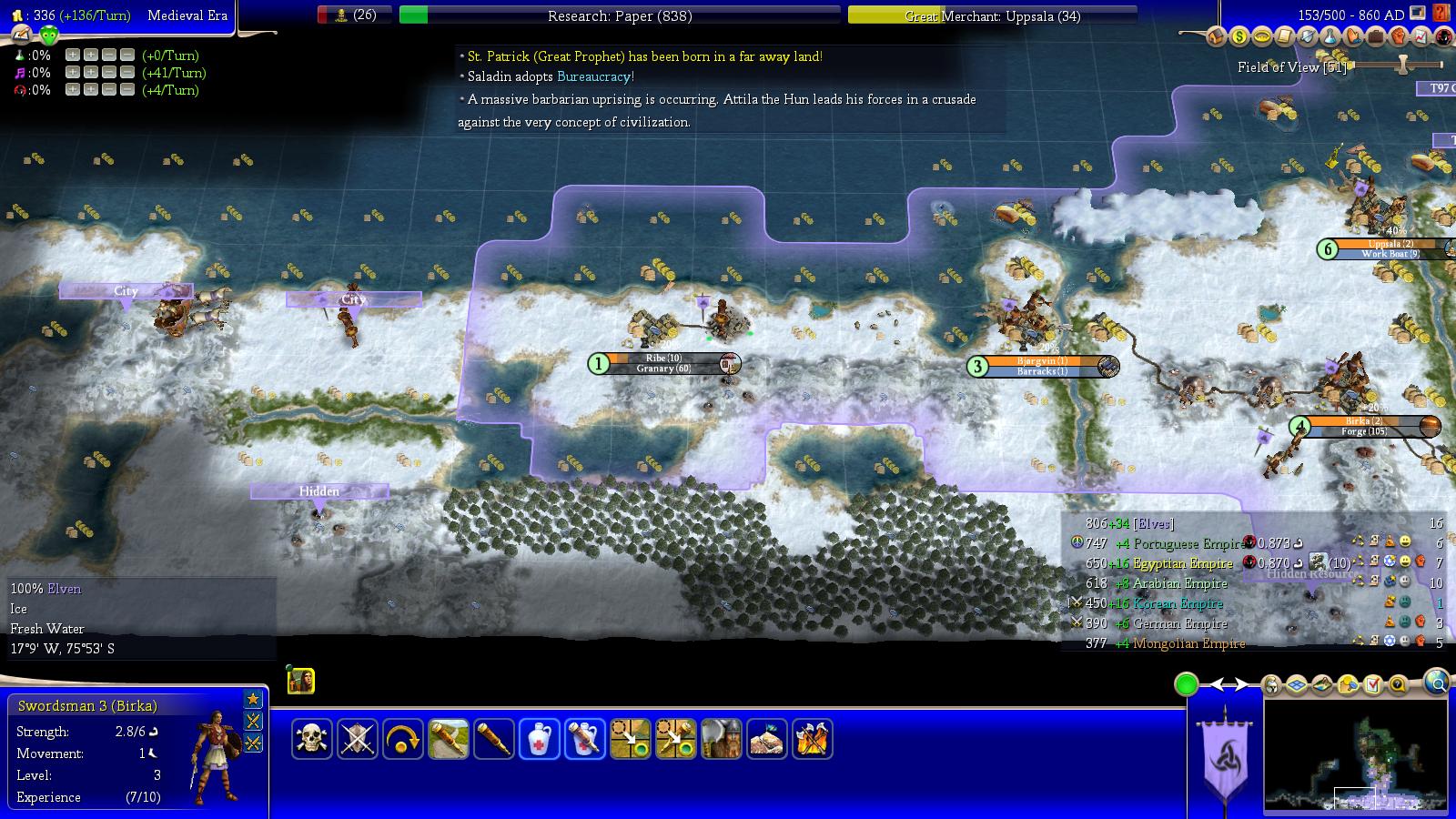 Even until the very end I had City Raider Berserkers attacking from transport ships!
Kaitzilla vs. The World
The Largest Civ 4 Deity playthrough in history!​
You must log in or register to reply here.