Rhye's and Fall of Civilization: the Boardgame

I'm not sure if anyone looks at this thread anymore, but I finally got a chance to play Civilization the board game with this variant, and I have played it multiple times, now, though the games were all ended before the end game conditions. (after an hour or two of play)

This variant is really great, and it preserves the best parts of the game while cutting out a lot of the crap and adding some elements that make it feel more like Civ without bogging down the game, which is great. It also keeps some of the odd quirks of the movement/combat resolution system of the original board game, which I had thrown my own house rules at many years ago back when I played it with friends every other week or so for a bit.

For example, per the original game rules (and this variant rules, which don't change this particular part), battles are declared on or by units that have already moved, and any units that have not yet moved may still move freely if the player that owns them has not taken their turn to move, yet. I remember from the old days of playing the original game, and see again in my recent plays with Rhye's variant, that allowing any units that haven't moved to still move even after battle has been declared in their current space doesn't make any sense. It can result in a player sending armies from their city to an adjacent enemy city, and the enemy deciding to move out all armies from that city and simply conquer the city the attack came from, which probably has only a unit or two left to defend. Or a player sending a fleet to attack an enemy fleet, but then the enemy decides to not get attacked after all by simply moving their fleet away after the first player already moved and declared an attack. It doesn't happen a lot, but when it does it's very gamey and silly.

A simple way to fix this issue is to rule that military units cannot leave a space after a battle has been declared there, even if they haven't moved yet. This gives a bit of an advantage to the player who goes first in a turn, since they can attack and lock in place an enemy's units, but going after someone has advantages, too, since you can see where someone wants to attack and then move your armies around to reinforce your attacked armies or attack weak positions with armies that aren't involved in any combats. I have been using this house rule and I think it improves the game.
Final Fantasy VII map
My BGG profile

I made small LEGO wonders to use instead of cutting out little markers for them: 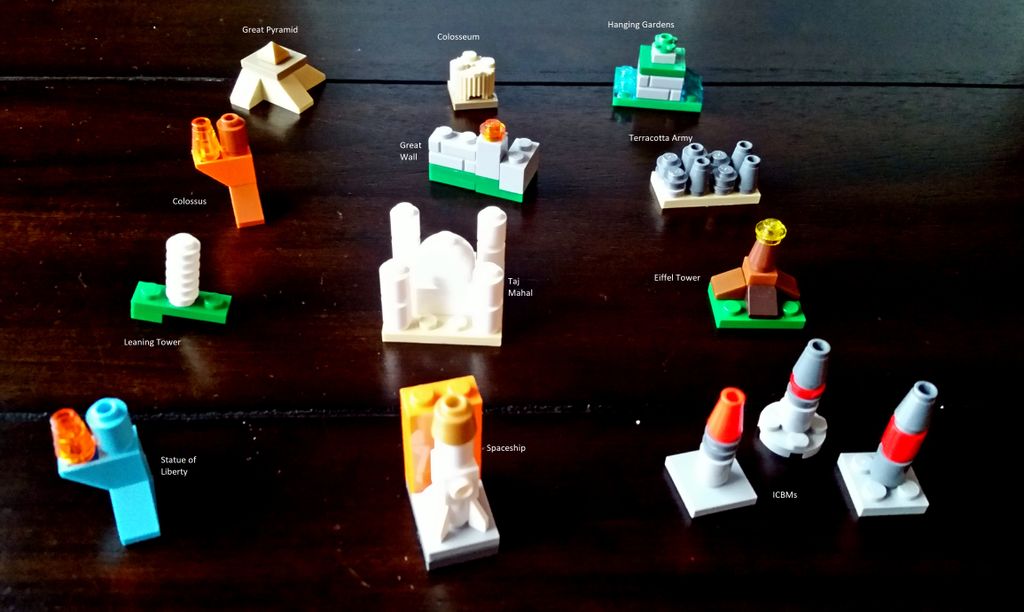 Here's an image from my most recent game: 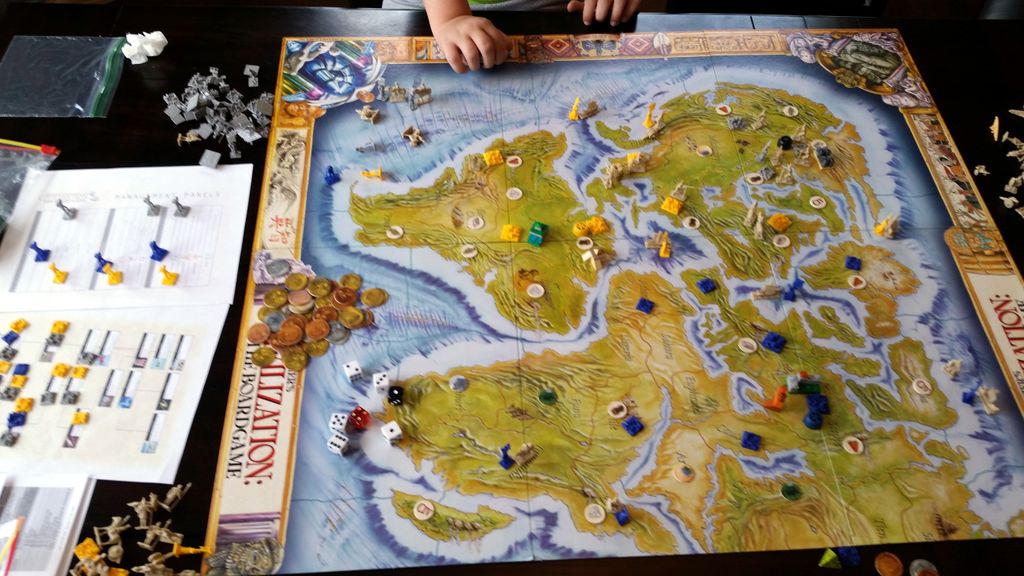 It's been three years since the last time someone posted "I'm not sure if anyone reads this thread anymore", but I have a question/request. The current 'find it here' link on the front page goes to Rhye's website. The 'downloads' link > 'latest version' on that site goes back to a page on this forum.

However, the 'Download Now (via external site)' button no longer works, so I am unable to download the cards and whatever other materials are needed to make this game work. The 'reference sheet' hosted on Rhye's site still works, but everything else is MIA. Does anyone have a current working link to the boardgame download, or would one of you be willing to re-upload it for those of us just discovering this game? Thanks!

@Rhye , @Aarontu : I'm not sure how active you are, but I figure one or the other of you would be my best shot at finding an answer. The download link for the Rhye's & Fall boardgame is no longer working. I was wondering if either of you have a copy that you could re-upload, or point me to a working link so I can download the rules and cards. Thanks!

...Huh. That's really weird. I can confirm that I was completely unable to download the file using Google Chrome, but when I opened a different browser (Microsoft Edge) I was able to download it easily. I have not checked for Firefox or Safari, so I'm not sure if this issue is exclusive to Chrome. I haven't encountered any other issues with Chrome, downloading or otherwise, on any other site. I have no idea what it means.

Thanks for your help anyway. I was able to download it, and I look forward to playing your board game!
V

vnlima said:
Hello, @Rhye ! I have some questions regarding Tricolour:
1) When I use this action, is the change of religion/government mandatory?
2) Even if the change is not mandatory, do I still need to have a certain technology (one required by a religion/government) before using this action?
3) When I change religion and/or government with Tricolour, do I lose 2 stability?

Rhye's and Fall for Civ5 is coming

Welcome to our new home!