This seems very familiar, especially the status bar issue--but I can't remember how I fixed it before.

I just overhauled my mods to try JFDLC, and when I start my game the UI seems to have some issues.

For example, the status bar has items with exclamation marks; eg "Golden Age! Culture! Tourism! Faith!". As well, the pictures on the command icons seem too large for the icon boxes themselves.

I do use a lot of mods and I understand that there may need to be some log examination or digging into incompatible mods... but having seen the first item before I hoped someone might remember the general problem.

Apologies if this is answered elsewhere, I did try many searches. 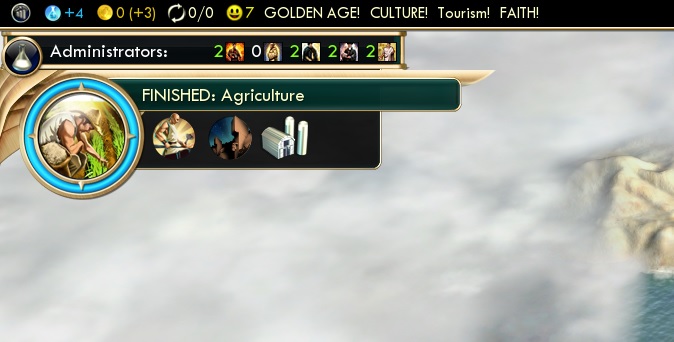 Update: Problem only occurs when RTP is enabled.
G

I get a similar message except it is 000,000 resources, culture, population, etc and it also says golden age. there is no command module for units or cities, the age is 2100 AD on turn one. I have no mods. I use maps from Civ 5 only no modded maps. I use direct x 9. Since there are issues with direct x 10 and 11 in using win 10. I deleted all my save games, i deleted and reinstalled the game 15 times. still the problem persists. It seems to be in all steam files. FROM STEAM itself since it has infected my other computer laptop as well. I want my money back! this game is supposed to work not send a virus across the internet to my other computers. Now my Dell Lattitude (Top of the Line Computer) is infected with the same problem, either the program refuses to load at all or loads with the final turn screen on a timed game. I don't have 'time' on in any game save! I do not have any other recourse except to never buy a steam game again. Technical support numbers are disconnected, technical support for Steam refuses to ever contact me. I am going to find a way to get back at the company by class action suit for selling games that have a life expectancy to turn off after five years of play!

Slow down. We haven't even done troubleshooting yet.
ryanmusante.com
You must log in or register to reply here.