Subsaharan African civilizations: this time with interactive map for reference

So, this year I had a little Africanist phase for some time, and I have decided to make my own amateurish map of main nations of Africa, basing on Wikipedia. There are 90 nations on this interactive map, incuding their rough amateurish estimates of inhabited area, rough amateurish estimates of population (not that there is any coherence in consistency in the total mess that those estimates are in the "serious" Internet), and links to articles devoted to given nations and civilizations. The general goal of mine was to cover all those with a population above 2 million people for whom I could find decent data (as map's description says, few countries have huge obvious holes in this regard - esp Congo, Tanzania, Cameroon, Mozambique). Regarding controversial nature of population estimates, map's description explains what's going on. 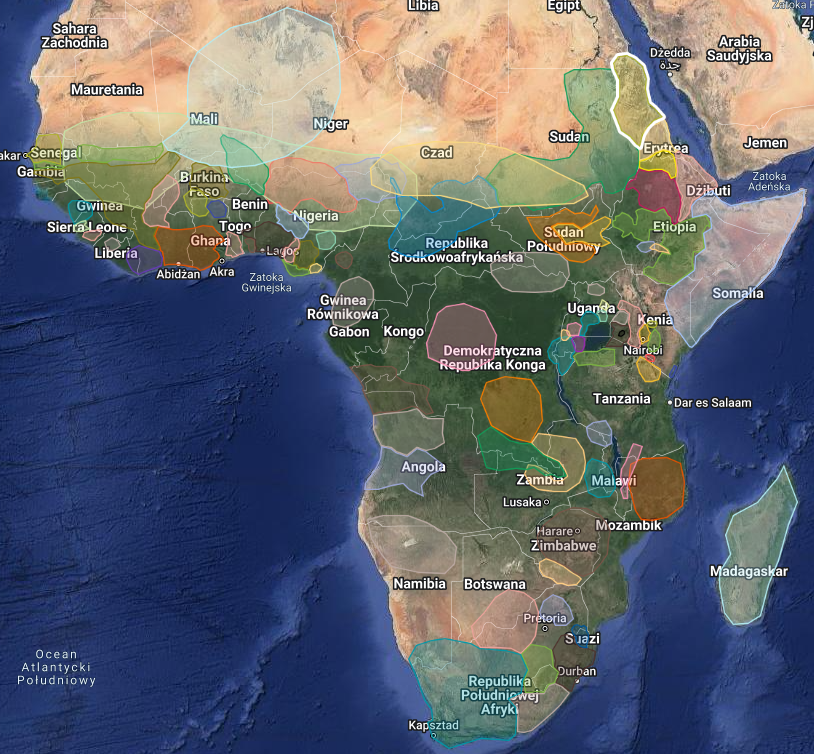 Some time ago I have realized that the discussion over possible African civilizations in Internet's popular history circles always circles around those very few select empires and civilizations in the sea of nothingness. In the meantime, there is plenty of big African nations and descriptions of their culture, history and civilization from areas usually depicted as "blank" in terms of worthwhile civilizations - you just have to go into "anthropology" (articles directly devoted to particular ethnicities") instead to pure "history". Kenya is the most spectacular country in this regard, Tanzania seems to have the same tier of plentiful history, but for whatever reason its people are very badly documented; anyway, both of those countries offer much more civilizations than mere Swahilli coast. Even areas such as Botswana and forested West African coast have peoples that are would be no worse factions in games like this than Native Americans, Maori and Mapuche (in fact all nations on my map are much more numerous nowadays than those three). Not to mention how much actual reading into African ethnicites obliterates the idea of Africa consisting of "tribes", when plenty of those "tribes" have population equal to European nation states.

My personal favourite new Subsaharan civilizations would still be Akan and Yoruba, so not much new in this regard, but making this map has made me really desire some civ from Great African Lakes area, such as Kikuyu or Kalenjin (honestly I think they could be more colourful and spectacular than Swahilli civ proposals which were always built upon one dimension of "all unique stuff is trade and navy"). Also, if we have to always get southern nation, Xhosa or Tswana could be fresh replacement for tired Zulu.
Last edited: Sep 14, 2022

My two more desired Sub-Saharan civs are Adal (Somali) and Zimbabwe (Shona), also certainly Akan or Yoruba are great options for the Gulf of Guinea region.

These regions where we have many options of similar potential make me want more significative "Minor Civs" in-game. For example the nations from the Great Lakes could gives us some unique cattle related tradition (techs like) and unique auxiliary troops. There are too much potential on minor civs as strategic in map elements.

I wish the Boers would make it into a Civ game as an official civ (and not just as a faction in a scenario like Civ V). They're a cool, unique civ with some fairly well-known leaders.
ONS SAL LEWE, ONS SAL STERWE
ONS VIR JOU, SUID-AFRIKA​

Madagascar would be a cool, unique civilization! A cultural mix of Melanesians, Arabs, and Africans located on important trade routes and forming a kingdom that united all of the island and resisted until pretty late European colonialism, with a powerful female leader in Ranavalona. Using the Power of Tangena.

Si No Hay Paz said:
with a powerful female leader in Ranavalona.
Click to expand...

I agree that Madagascar would be very interesting but Queen Ranavalona was a absolutely horrid leader. Her tyrannical policies contributed to killing around half of Madagascar's population.

Radama I or his father Andrianampoinimerina would be better choices.
Last edited: Oct 5, 2022
P

Buganda (NOT the modern Republic of Uganda with Idi Amin or such, but the old Kingdom of Buganda that occupies a third of the land area of modern Uganda with at least three possible Kabakas (indigenous term for their kings) as good leader choices), is one I'm quite partial to, myself. Or one of the Somali Sultanates, as well.

My top pick would be Benin, the Kingdom of Benin, not the present-day country.
In general, I think some civ from the Bight of Benin or present-day Nigeria is warranted at this stage.
Need a good laugh? Check this out: https://forums.civfanatics.com/media/albums/civ-6-leader-memes.173/
Season 2 Wishlist/Expectations: Iroquois, Haiti, Navajo, Italy, Berbers, Assyria, Siam, Akhenaten for Egypt, Maria Theresa for Germany/Hungary or Austria
Game Modes: Nomadic Start, Pandemic, Cultural Identity and Ethnicity, Reformation and Schisms
City States: Lhasa, Port Royal, Luxembourg, Mesa Verde, Dubai, Sheetʼká

Well, given I've already made Swahili and Akan mods, I think it's obvious what my top two picks are XD

But the next two down from that I think would be Benin and the Malagasy
Follow me on Twitter and support me on Patreon! Find my mods below!
Steam Workshop • Civarium • Historicity++ • Civ Selection Screen​

From Africa my pick is Dahomey, from now a days country of Benin.
I think they have an amazing Unique Unit as the Amazon Warriors (Ahosi). Few civilizations can have an unique unit of female units!
And also, with Dahomey, we can discuss about slavery in this game. Since Benin was also knowed as the Slavery Coast.
Maybe some ability linked with slavery as sell population of it's own cities.
EMPEROR OF HAITI
1811 - 1820

Isn't having a Civ whose entire reason for existing because of slavery a bad thing?

Personally, I would go in the opposite direction and pick the Igbo people led by a Nri leader. The Nri served as both a safe haven for those who had experienced rejection in their communities and a location where slaves may be freed from servitude. Instead of using force, the Nri expanded peacefully through converts gaining neighboring communities' allegiance.

I think this could make for a fun pacifist religious Civ with high loyalty pressure.

FishFishFish said:
Isn't having a Civ whose entire reason for existing because of slavery a bad thing?
Click to expand...

Of course Slavery is a bad thing! But that don't change my mind of Dahomey can be added.
The question is, if we add Dahomey, should we make slavery something playable or better to have another kind of ability?

I don't know this Nri very well. As a second option to fullfill this corner of Africa is Ashante or Benin.
EMPEROR OF HAITI
1811 - 1820

I still think Baganda is unexplored material, but has many elements that are often viewed as iconic to a general African, "image," fills the Great Lakes, "empty spot," well, and avoids issues like slavery and such, quite well.

FishFishFish said:
Isn't having a Civ whose entire reason for existing because of slavery a bad thing?
Click to expand...

Well civ 6 Aztecs are about both slavery and human sacrifice, so...

By the way Portuguese can be also the slavery civ for CIV7, just use the Eagle Warrior mechanic in their Bandeirantes.

I mean, the last Aztec human sacrifices took place five hundred years ago. There is no one alive in the world who is old enough to have personally known survivors (or victims) of the Aztec system. It's a horrible, but impersonal historical piece of information.

Not so African slavery. As late as 2020, there were children of people born in slavery still alive in the US, let alone grandchildren and great-grandchildren. Brazil is even worse since slavery ended later there. For many people alive today, African slavery is the very personal horrors that were carried out against people they knew personally.

So, one require a lot more caution and care than the other.
Last edited: Oct 21, 2022
"My friends, love is better than anger. Hope is better than fear. Optimism is better than despair.
So let us be loving, hopeful and optimistic. And we’ll change the world." - Jack Layton's last letter.
Formerly known as Oda Nobunaga​

Evie said:
Brazil is even worse since slavery ended later there.
Click to expand...

Like it used to say in civ 4 when you adopt slavery, it was a sacrifice of population, particularly for Aztec which had the sacrificial altar and reduced the cruel oppression by 1/2. sort of like a democide.
P

reddishrecue said:
Like it used to say in civ 4 when you adopt slavery, it was a sacrifice of population, particularly for Aztec which had the sacrificial altar and reduced the cruel oppression by 1/2. sort of like a democide.
Click to expand...

I've never played Civ4, myself. I've seen Civ4 players refer to, "whipping," (often along with, "chopping,") in the seeming context of inefficient but, "leg-up," early- to mid-game building tactics, but no, I have never played that iteration.

Patine said:
I've never played Civ4, myself. I've seen Civ4 players refer to, "whipping," (often along with, "chopping,") in the seeming context of inefficient but, "leg-up," early- to mid-game building tactics, but no, I have never played that iteration.
Click to expand...

About time and space...