Hi, this is a wonder I have had in my game for a pretty long time.
Now, with Rob's wonderful Varangian Guard unit just around the corner, I decided to release it.

Here's a preview of the wonder:

Here's how you could use it in the game: 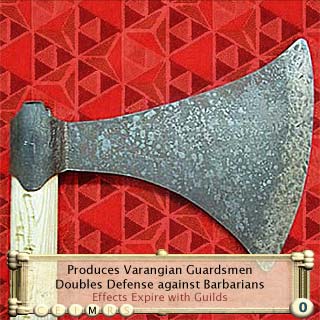 Varangians first appear in the Byzantine world in 839, when the emperor Theophilus negotiated with them to provide a
few mercenaries for his army. Although the Rus' often had peaceful trading relations with the Byzantines, Varangian
raiders sometimes attacked from the north. Such attacks came in 860, 907, 911, 941, 945, 971, and finally 1043. These raids were successful only in causing the Byzantines to re-arrange their trade treaties; militarily, they were always defeated by the superior Byzantines, especially by the use of Greek fire.

The ruling class of the two powerful city-states of Novgorod and Kyiv eventually became Varangian, and the Byzantines soon acquired an official mercenary force that became the Varangian Guard. This occurred in 988, when Kyivan Prince Vladimir the Great converted to Orthodox Christianity. In exchange for a marriage to Basil II's sister Anna, Vladimir
gave Basil 6,000 Varangians to use as his own personal bodyguard. The Varangian Guard was one of the fiercest and most loyal elements of the Byzantine army, as described in Anna Comnena's chronicle of the reign of her father Alexius I, the Alexiad. Their main weapon was a long axe, although they could also be skilled swordsmen and archers.

They were the only element of the army to successfully defend part of Constantinople during the Fourth Crusade,
although the Guard was apparently disbanded after the city's capture in 1204. By this time, the term Varangian
referred to any mercenary from northern Europe, and the Guard was probably composed more of English, Scottish and
Norman mercenaries than Russians or Scandinavians.
Click to expand...

. I hope I can do the animations.
Anno Domini: Civilization 6 website

I have full confidence in you and your skills.

Location
behind the scenes

WH40k Mod Pre-Alpha! Join the testing!
There are new moderators in town!

You know I've got a weak spot for spawning wonders. I also appreciate the complete job you've done with the pedia et al.

Pressures on you now Rob

(I know you'll knock out another dazzler

)
Two great historical Civ 3 scenarios for you:​
HEGEMON! Of The Classical Greek World!http://forums.civfanatics.com/showthread.php?t=475490
"Best Scenario of the Year" 2012 Award

Nice splash. But the perspective of the statue looks to be from below, while the angle of the base is from above.
About the Varangians, weren't they Scandinavians, although they lived in Kiev?
Earth 2000 version 1.OneBillion In Forums Now!!!
Play it!!! Or Don't!!​

The Varangian Guard consisted of Scandinavians hired as mercenaries in Konstantinopel. Kiew was founded by Swedish vikings.

Location
Not on your side

Why can't you be a non-conformist just like everybody else?

Bungus said:
Nice splash. But the perspective of the statue looks to be from below, while the angle of the base is from above.
Click to expand...

Looks great! But I agree with Bungus on this point. Otherwise, perfect.

D&D Mod: Champions of Mystara - Coming whenever it gets done!

... Working hard on it!
My Leaderheads are all available from the Civ III Downloads Database.
Alternate Leaderhead PCXs for Brennus, Ragnar, Hannibal, and Gilgamesh: Here
Stormrage, your orcish awesomeness is missed!

Well, they had some part in its history. But I think its debatable that the Scandinavians founded it.
Earth 2000 version 1.OneBillion In Forums Now!!!
Play it!!! Or Don't!!​

if i remember correctly wasn't Harald Hardrada (probrably spelt wrong) the
famous viking king, who attacked britian in 1066 with Tostig Godwinson at
one point, earlier in his life a member of the Varangian Guard?
My Graphics Library

WP: Discussion Thread
"Oh my son Ahmose, I am thy father.
I set terror in the Northlands even unto Avaris,
and the Hyksos are slain beneath thy feet."
<-~-Amon-~->

That's right. Didn't help him too much, though.

lol yeah that's for sure!
no armour! in enemy territory! WHAT WAS HE THINKING?????

WP: Discussion Thread
"Oh my son Ahmose, I am thy father.
I set terror in the Northlands even unto Avaris,
and the Hyksos are slain beneath thy feet."
<-~-Amon-~->
O

My mother was from a small town on the island of Chios called Parparia. In that small town there are areas called Varangou and Maglava. The town was at one time defended by the Varangian guard or given land in that area as an award for service in the Byzantime theme unit. Maglavites were ranks within the Varangian guard.

I have a website about the history of Parparia called Varvathos.com

It is a timecapsule of Byzantine history.
You must log in or register to reply here.

A
Possible to make the Great Wall city model not appear?