BOTM 242: Hatshepsut the Sailor of Egypt. 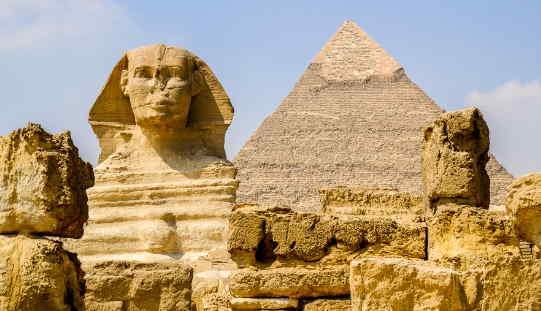 Hatshepsut the sailor? What's going on? Well it wasn't planned that way. It was going to be, Hatshepsut the Lady of the Mighty Horses. Unfortunately, soon after her loyal subjects had researched, found horses, and learned how to build war chariots, the Great Flood came. It washed away the beautiful city of Alexandria, where all the known horse pastures were located. All the knowledge the wise men had learned was destroyed with them, leaving as the only survivors a unit of chariots, who by good fortune were training on a high hill on the day the floods came. And Hatshepsut herself, who was leading a band of settlers exploring the far South, away from the floods.

Since that dreadful day, brave men have explored and reported back that they can no longer find any land route by which the chariot unit can return to protect their noble Queen. Such is their desperation that it has even been suggested that Hatshepsut's people should endeavour to learn the secrets of building boats to sail across the new seas. To add to their woes, all the ancient maps have been lost; but rumours abound that the only location where horses, or indeed, any resources that might be used to equip people to fight and defend the once-mighty Egyptians, have ever been found is to the North, where Alexandria used to lie. It is believed that, if those resources cannot be reached, then the Egyptian empire will lie helpless against whatever hostile foreigners might lurk in the World.

And that is why Hatshepsut has come, more out of a sense of hope than any current actuality, to be known as 'Hatshepsut the Sailor'


Hatshepsut the Sailor is Spiritual and Creative, and you start with The Wheel and Agriculture.

The Creative trait gives +2 culture/city each turn and double production speed of Colosseum, Library and Theatre

Unique unit: War Chariot (replaces Chariot)
A favourite for early sneak attacks, the war chariot is stronger than a chariot, with a base strength of 5. And it's also immune to first strikes.

We will open 'spoiler' threads during the month for players to discuss what happens in their games. Do not discuss any details of your game outside those threads.
Last edited: Nov 4, 2022

Let's review everything. Most important, because all victory conditions are enabled, that includes the Time Victory, so there's a definite endpoint to this game.

No options means we do have barbs, events, and goody huts (something for the war chariot to search for, while waiting for a galley). And we've been told that all of our strategic resources are up on that island. So...settle in place, build a worker, followed by a settler as soon as practical to move to the hill at the mouth of the river, then get that one building a galley ASAP. Research: Mining for the gold, then Fishing and Sailing. Prince difficulty means we get one free win against barbarians, who won't show up for 30 turns.

I'm looking forward to this!

Lentils have feelings too

Mining first for sure....but after that I am thinking Pottery, before Fishing/Sailing.

Riverside gold with flood plain cottages...on Prince! CS is the bare minimum Oracle target....Education might even be on the cards!

yay for the new game! still probably too busy irl to play, but looks very cool. In the worst case, will play later after submission closes

The gotm page says challenger save is at Emperor level. Which one is correct?

Conquistador 63 said:
The gotm page says challenger save is at Emperor level. Which one is correct?
Click to expand...

Ooops sorry about that. It's immortal level

Thanks for pointing that out, I would never considered it otherwise.

My bad for not putting them up earlier. I've now posted them

Because of the server downtime a few days ago, the submission deadline for this game has now been extended to 8 Nov 2022. That's to give anyone who wasn't able to submit while the server was down time to do so.
L

Well I got Covid, which gives me some time to play civ. Unfortunately, yesterday it took me all of six turns to totally botch BOTM 244. So my kind request is that you similarly upload the starting save for BT0M 243 if you are so kind and willing.


Edit: posted in wrong thread.
You must log in or register to reply here.