A few urgent fixes were added. For the rest, refer to the big changes of v83


- Added Byzantium city state in case it does not get founded
- increased cost of Renaissance and Industrial techs
- reduced Chinese victory point modifiers
- added Comanche Mounted Warriors to the native spawning units in America. They don’t require horses.
- native American units won’t embark
- fixed Turkish advanced spawn area
- fixed wrong stability maps
- starting settlers bug might be resolved by fixing the stability maps
- Pirates will never have a palace and will destroy any palace they conquer (might solve a potential crash)
- fixed one error affecting victory points related to city capture
- increased barbarians in Asia in the games when the Mongols will not participate
- increased barbarians near Egypt
- revised a few resources in Europe and India
- Barcelona starting date postponed in order not to interfere with French territories
rhye.civfanatics.net 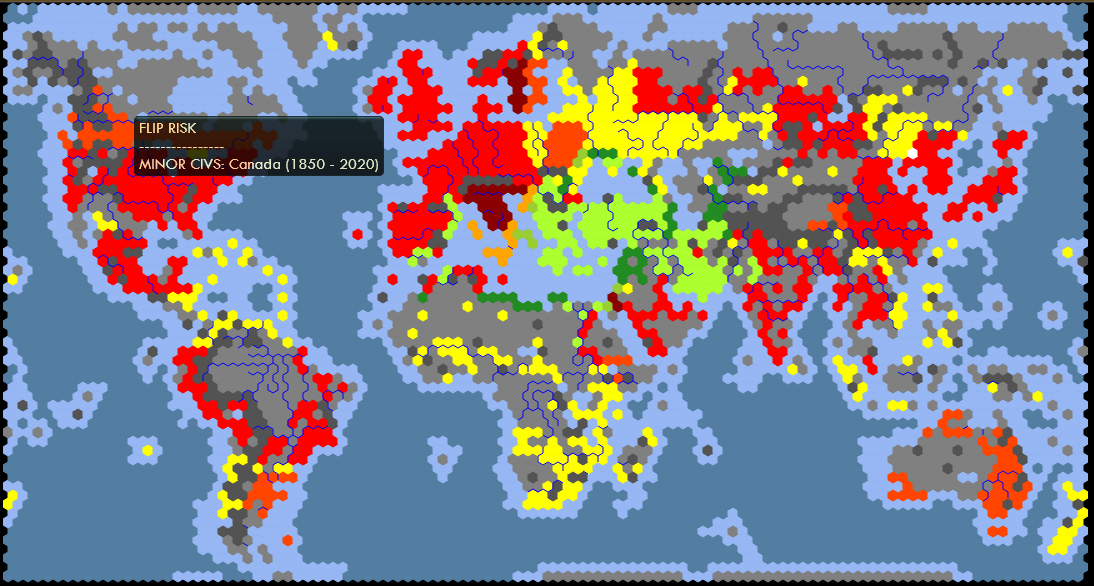 Persia: why is Rome darker red than the rest of Europe? 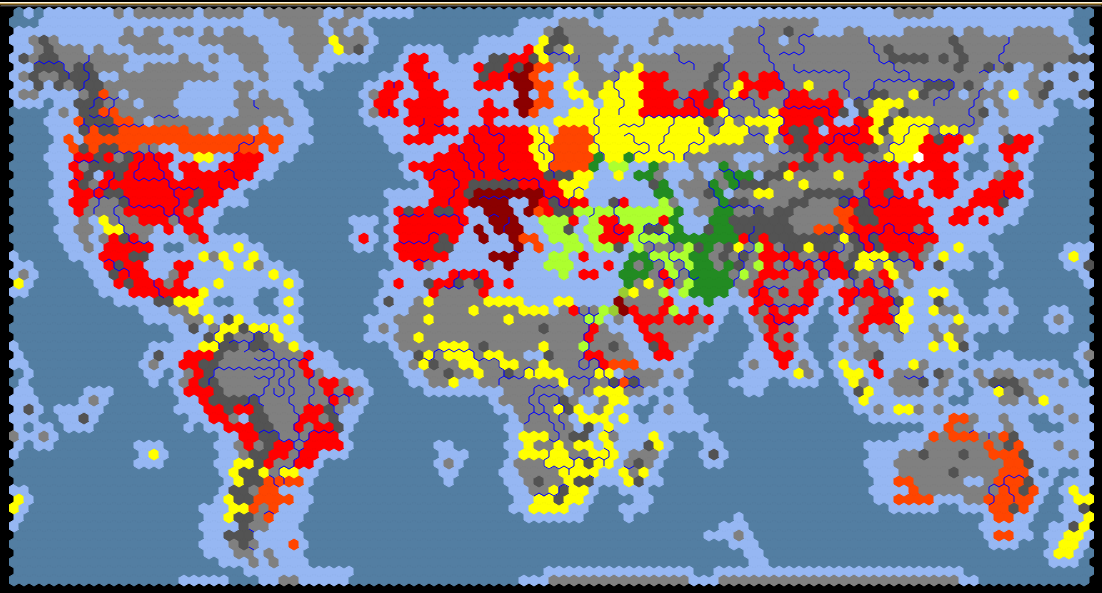 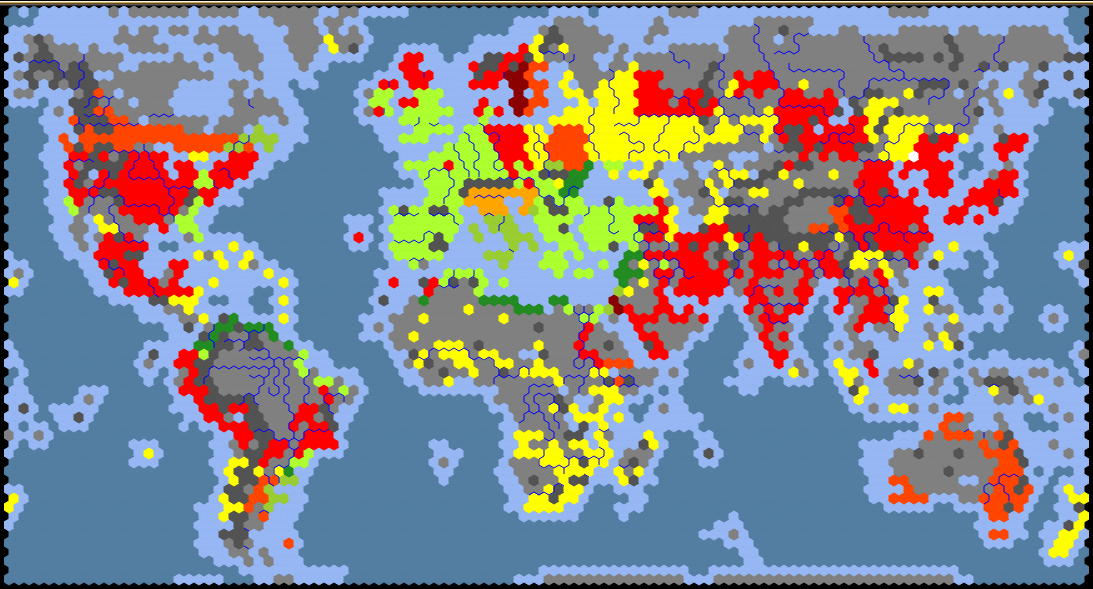 Byzantium: what about the city itself? 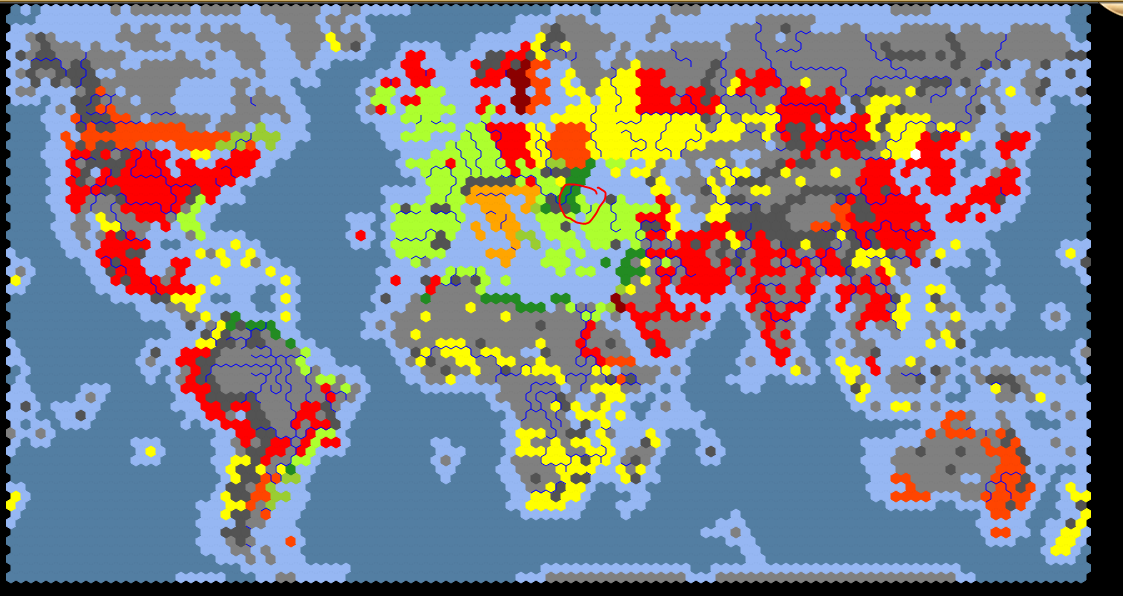 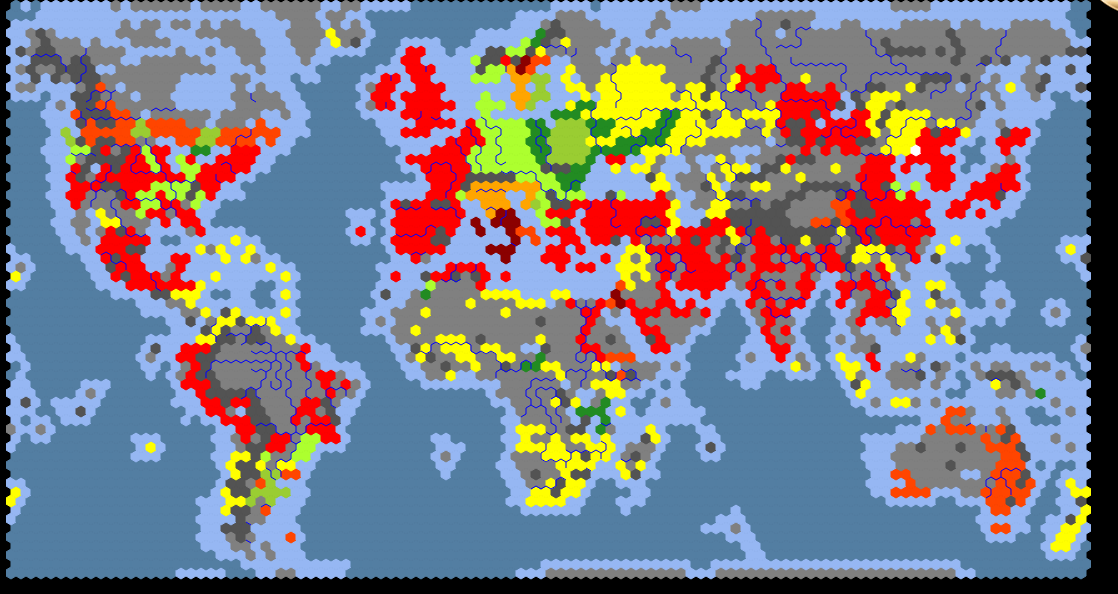 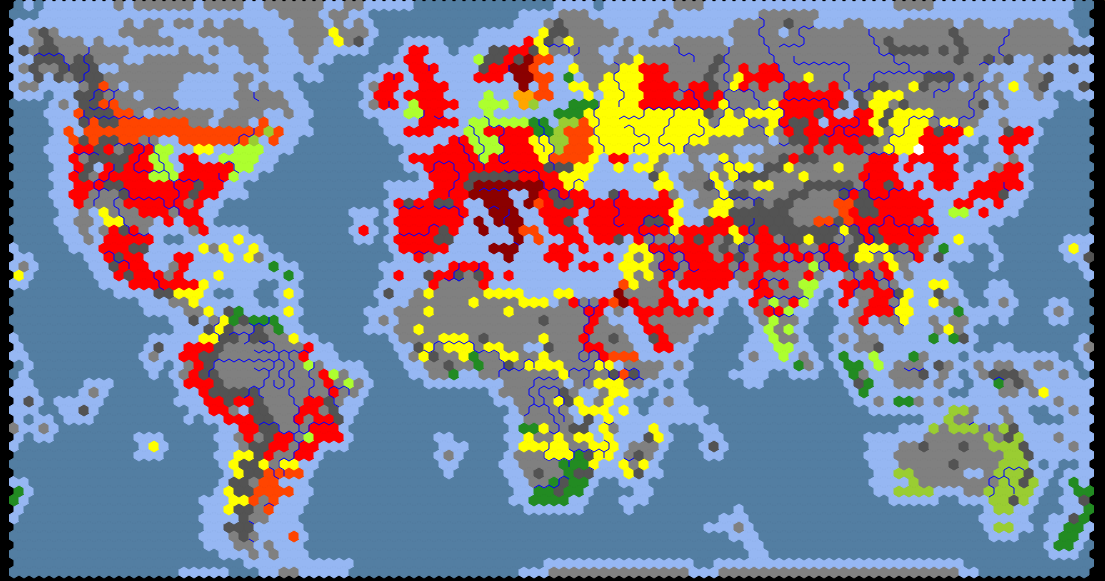 sorry this may be my fault with the mapping?
RFC is coming back for Civ 5!

You might be on to something. I've been playing Rome today and been struggeling with territorial loyalty from the start even though I've kept myself within historical borders.

uhm. You know what, I need the Atlas. Cause I can't see the actual maps being produced.
rhye.civfanatics.net

I started a game with Greece. Everything went quite well. The Romans settled on their peninsula, Egypt was there as well as the Persians with whom I was luckily able to establish good relationships. Carthage was friendly towards me as well and i had trading routes to them when they suddenly launched a well organised Invasion of my city Tarsos in Anatolia. I saw their units coming (2 elephants, 2 pikemen! in late antique era and warrioirs as well as gallies) but thought the´d attack Jerusalem with which Carthage allready was at war. That was one of the best organized wars I whitnessed by the AI in civ! Tarsos changed it´s owner 3 to 4 times and peace was signed with status-quo-ante.

With my special unit Hoplite the Hun invasion was quite easy to encounter. After a few horsemen killed by my brave troops Attila offered me peace and looted Italy leaving no coty behind. The Arab spawn made Egypt and Carthage collapse. Very historical! It also ruined my possible trading routes lowering my income significant but not endangering. So next step for me was to strengthen uo a bit to prepare for the Ottomans but I´m not able to found a further city as my empire always descends into civil war when I do so although the spots are green on the stability maps for Greece. Stability needs to be overhauled as the same happened to me with Germany. I add some save-games to this post if they might helpful.

Meanwhile I started a game with Japan. When my scout reached Europe he found France, Spain and still a strong Roman Empire! Germany allready collapsed obviously just after start and I met Russia who only existed for few rounds.
Here also stability seems to be somehow messed: 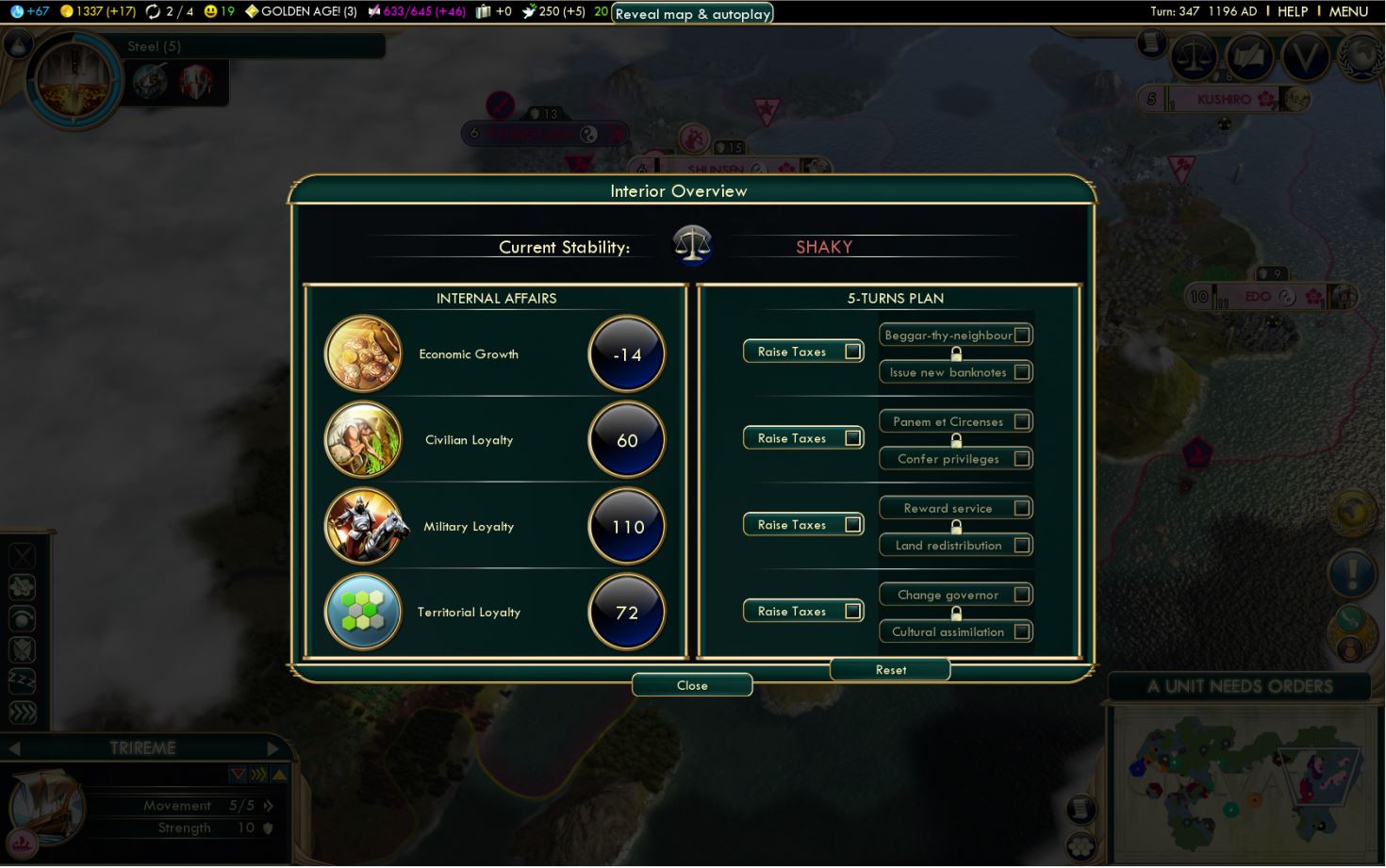 thank you, I will check.
One single negative category is enough to be shaky. Indeed,makes sense to be stable if total is >200. I will change it.
Last edited: Jul 13, 2022
rhye.civfanatics.net

Thanks for the info!
I will give you a quick update how my game with Japan proceeded:

I attacked Korea, conquered the capital Hanseong? and they collapsed and Pyongyang automatically fell to China. Soon afterwards the Mongols conquered Beijing making the Chinese collapse and getting Pyongyang for free as well. My Stability for Economic Growth stayed in low negative area but my stability for Military loyalty fell down to -9 and so I collapsed after a few rounds again. I lost one Samurai in the war against Korea so losses can´t be the reason for collapsing. Meanwhile I earned more than +100 Gold/turn and still had negative Economic stability. Bad thing was I had most of my troops in Korea which flipped to rebel faction leaving me with just a few crossbowmen and Caravels. A short guideline what influences stability like in civ 4 (as far as I remember building a courthouse brought "++" for stability, every open-border agreement "+", and so on.

So I just decided to take my chances with Portugal. Game is just loading.
So to be continued...
You must log in or register to reply here.