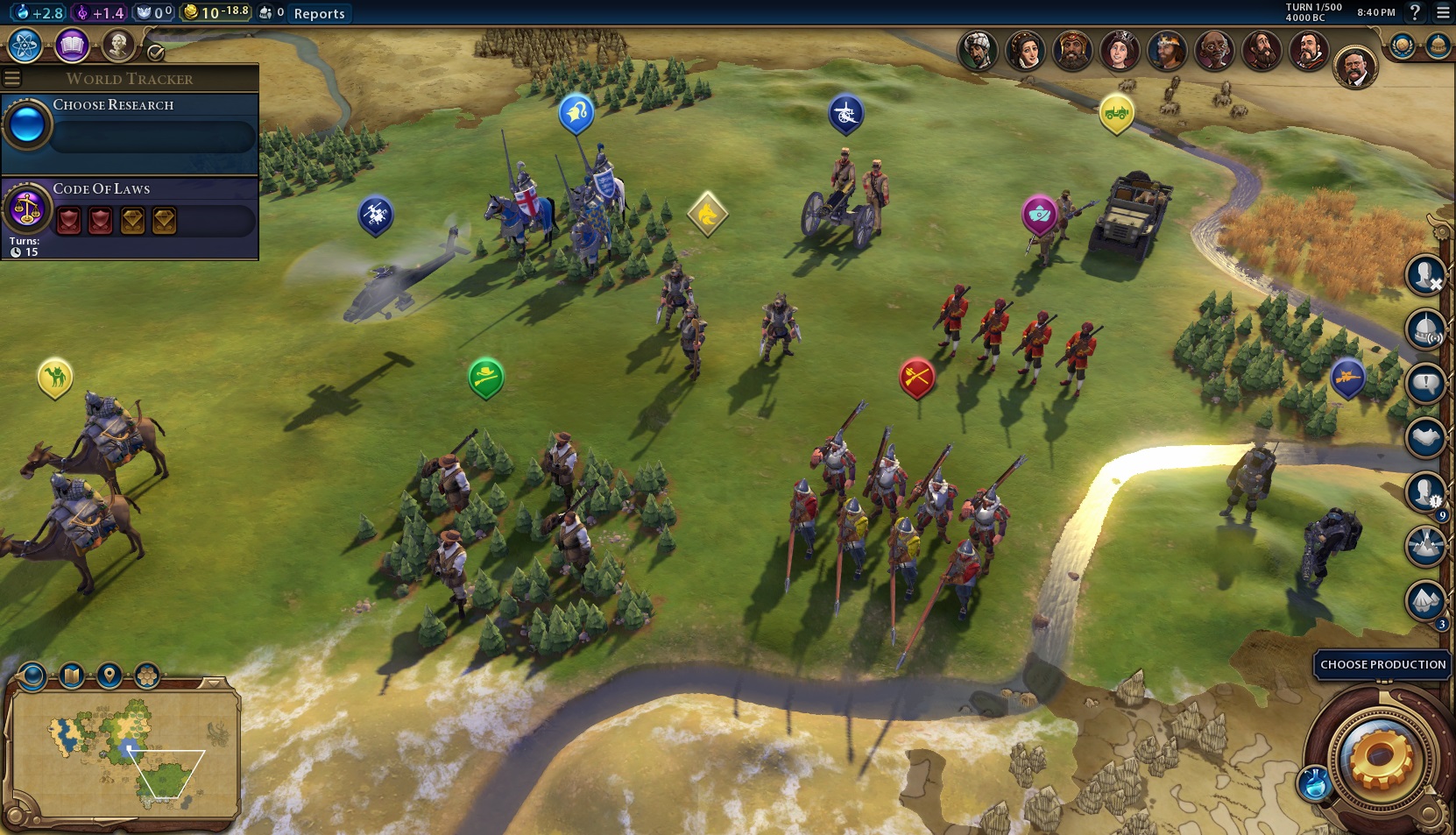 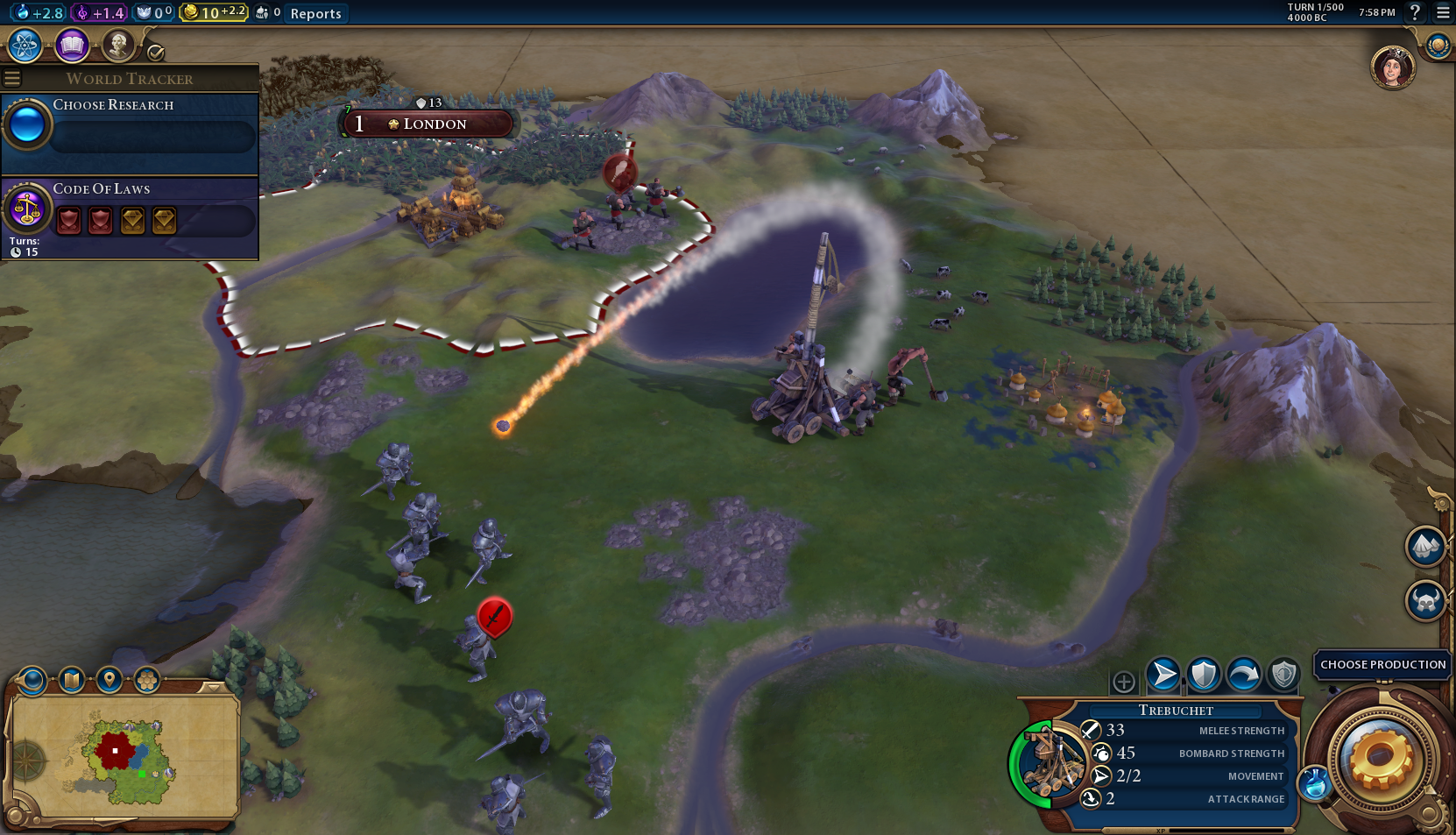 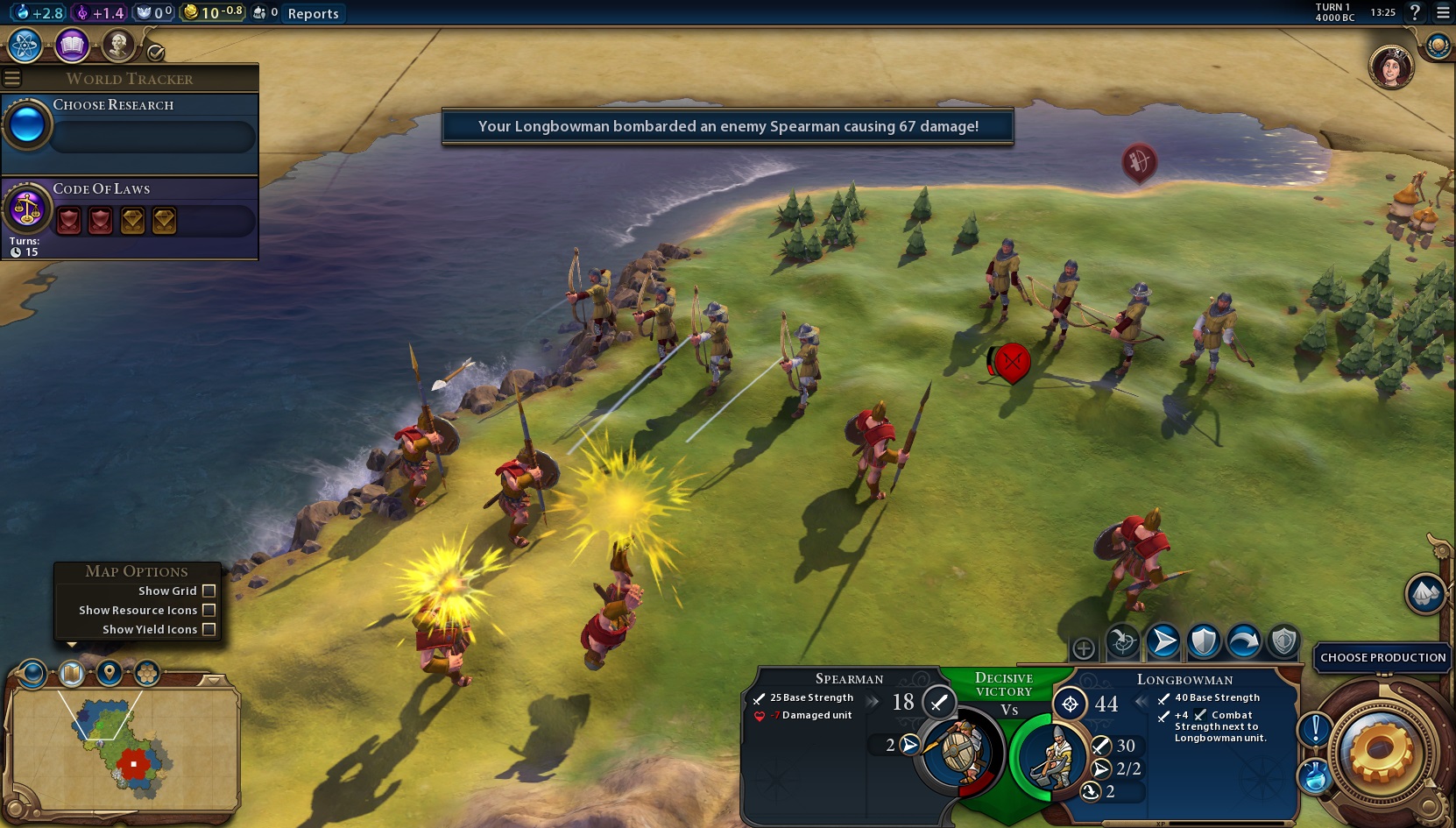 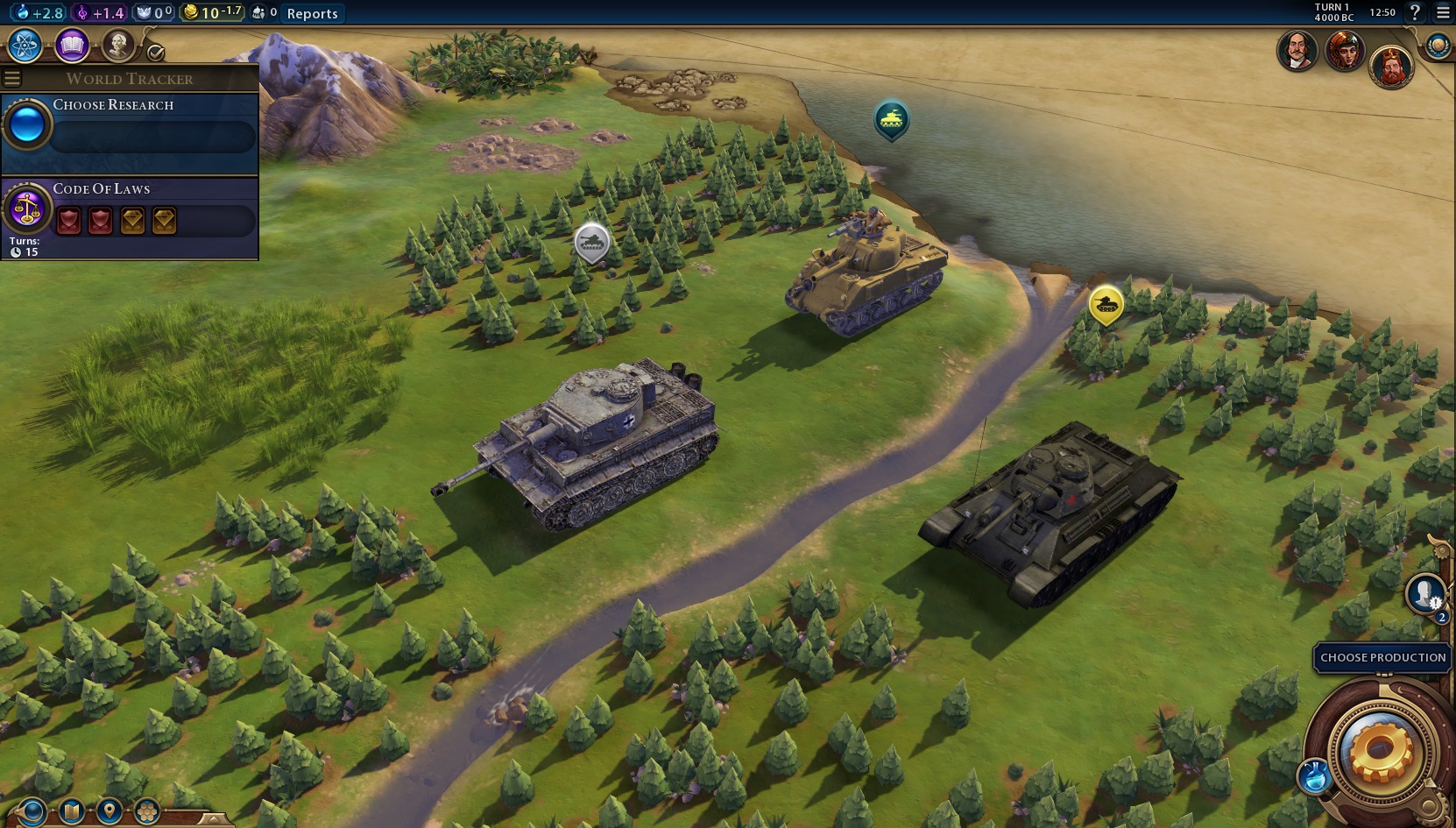 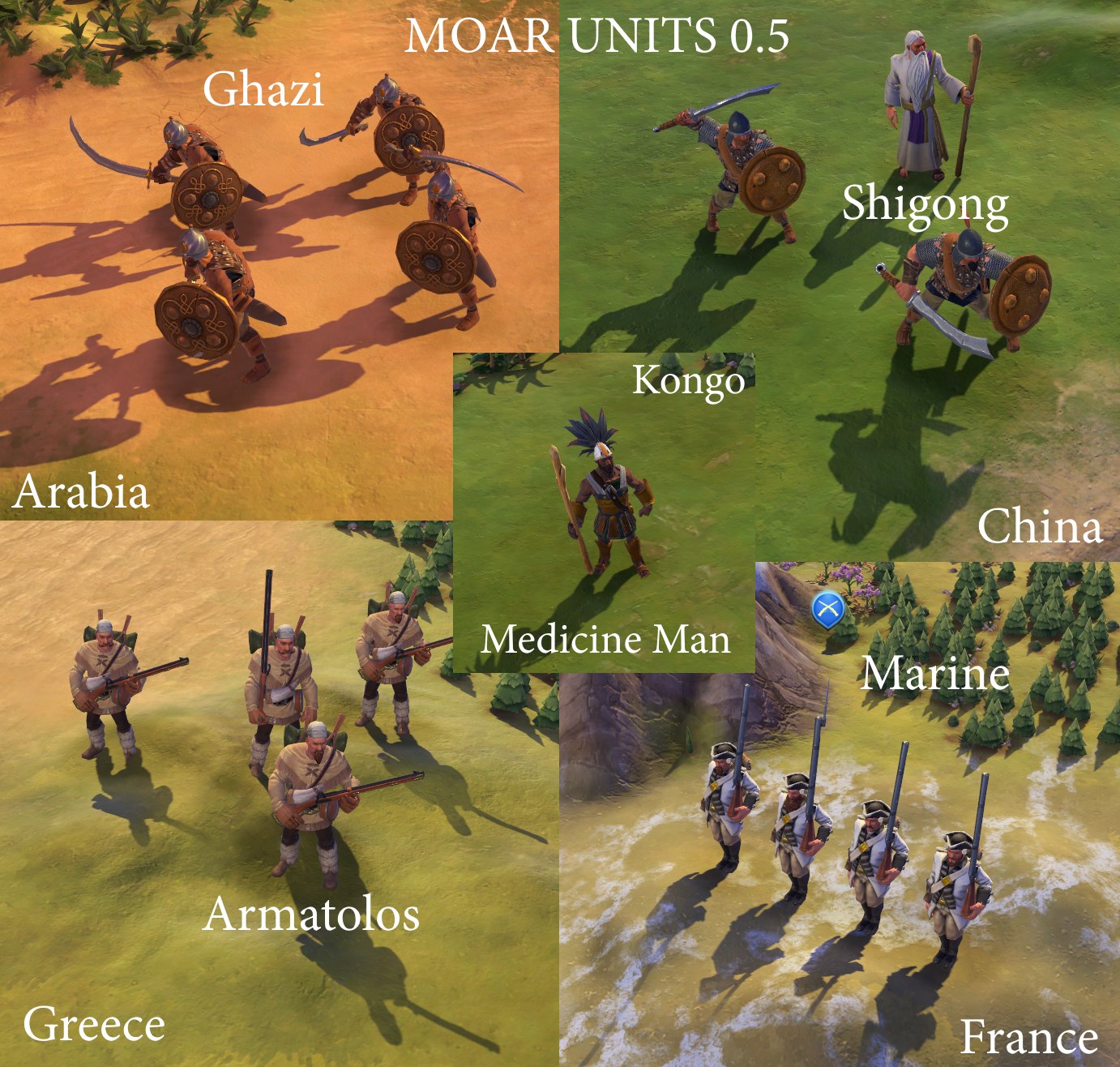 Scout now upgrades to Explorer then Ranger then Recon.

Pikeman now upgrades to Gatling Gun then AT Crew. Anti-Cavalry bonus increase to +20 vs Light Cavalry and +15 vs Heavy Cavalry.

Catapult upgrades to Trebuchet then Bombard.

Minuteman (America)
American unique Industrial era unit that replaces Musketman. Slightly stronger than Musketman, and gains +5 Combat Strength when fighting in or adjacent to its home territory. Also gains additional +5 is fighting in Forest or Jungle.

Ghazi (Arabia)
Arabian unique melee unit that replaces the Swordsman. +5 [ICON_Strength] Combat Strength when opponent is another religion. Yields 50% of defeated units' Combat Strength as Faith on combat victory. Converts captured cities to player's religion. May be purchased with Faith.

Landsknecht (Germany)
German unique Medieval era unit that replaces Pikeman. Half the cost of Pikeman but must be purchased with gold.

Tiger I (Germany)
German unique Tank replacement that has +5 Combat Strength when attacking.

Phalanx (Sumeria)
Sumerian unique Ancient era unit that replaces the Spearman. The Phalanx is available with the discovery of the Mining technology. +8 Combat Strength if fighting within 8 tiles of a Ziggurat improvement.

T-34 (Russia)
Russian unique Tank replacement that costs less to build and less maintenance. +5 Combat Strength in or adjacent to own territory.

Sohei (Japan)
Japanese unique unit available with the Feudalism Civic. Can be purchased with Faith. +10 Combat Strength when defending.

Hyksos Bowman (Egypt)
Egyptian unique ranged unit that it stronger than the Archer it replaces.

Tessarakonteres (Egypt)
Egyptian unique naval ranged unit. Stronger than the Quadrireme it replaces and has range 2 instead of 1.

1. Unzip the zip file.
2. The MOAR_Units directory should be copied into your Mods folder (.../Documents/My Games/Sid Meier's Civilization VI/Mods/).
3. Enable enable Moar Units! via the checkbox under Additional Content.

Re-Use in Other Mods
I'm happy for anything from Moar Units to be re-used and reworked in other mods. Go ahead! (Github link)

Have fun!
Reactions: Clubber Lang, Manifold, Golan v and 2 others

Outstanding addition to vanilla Civilization VI. Highly recommended with Warfare Expanded mod.
Upvote 0 Downvote
very good mod but could you had unit for the new leader of rise and fall khmer and indonesia please
Upvote 0 Downvote
Makes warfare quite a lot more interesting and blends with the game seamlessly, must have mod
Upvote 0 Downvote
are you kidding me? had a great game going to landsknecht, but instead of half the cost it is double the cost at 400. what the hell

Deliverator
The price in gold starts at 100, but then increases with each Landsknecht purchased like Settlers. Is it possible you had already built a couple before the cost reached 400?
Upvote 0 Downvote
Very nice! I like how the units have really cool historic names and the balancing is cool! I was trying something myself and maybe you could help me out? I would like to either edit trade routes making external trade routes better than internal ones (same perks as internal trade routes plus gold for example) or what i would like even more is creating some kind of international trade unit, being able to have one/serveral per civ you are at peace with! That would make a lot of sense because economy encourages peace. You would have to consider going to war because it could cripple your economics, which makes the rest of the winning options more atractive and would make other civs like cleopatra really attractive ( to play with... i mean as a ruler! :D).
Upvote 0 Downvote
Great mod, it elevate this game on totally different level.
Upvote 0 Downvote
Really ads to the game. Question are you going to make one for the Aus DLC?
Upvote 0 Downvote
Excelent mod. Ads many exciting new unique units and a couple for all civs that are badly missing from base game for now.
Upvote 0 Downvote
Great mod. It gave the game a Civ 5 feel. I like what you did with Knights line. It is not as empty as it was before. Carts>Knights>Tanks.