migalhone said:
"Getting fogbusters out instead of warriors or scouts running around curiously."

By that, you mean builds units more powerful than warriors to be more effective against barbarians when we send them out to places we haven't settled yet?
Click to expand...

No, the units are the same. It's the mission that's different. Rather than walking far away from your core, finding resources or other civs, keep them stationed around your cities to "bust the fog" of war. Barbs will not spawn within X tiles of a unit (I forget what X is in Civ IV). By using them as sentries, your workers can build improvements in relative peace.
Ubuntu ... speaks of the very essence of being human. ... It is to say, "My humanity is caught up, is inextricably bound up, in yours." We belong in a bundle of life. We say, "A person is a person through other persons."

2 tiles in every direction around an unit.
I think spawnbusting would have been more accurate, fog is okay.

Deity is infamous for barb rushes on turn ~35-45.
More of them pop in relation to how many land tiles are on a map, and once certain conditions are met they all rush towards your neared city.
By spawnbusting where it's possible their numbers can be greatly reduced cos they also cannot pop near other barbs (same 2 tiles radius rule).
Beginner help guide for Civ IV

On my PC, where I have been playing Civilization IV for at least a decade, I always heard a religious sound the very moment I let a Missionary spread its religion. Yesterday, I installed Civilization IV on my laptop - and there, I only hear the religious sounds all at once (a cacophony, really) when I start the next turn. Does anyone have any idea what causes this? How does this work for others? Crossposting this between the General and the Creation & Customisation forums because I am not sure if this could be related to (but how?) or fixed with modding.

EDIT: I've figured out that this can be traced back to e.g. EFFECT_MISSIONARY_ACTIVE_BUDDHISM in Civ4EffectInfos.xml, but I am at a loss how the game knows which effect to use, and thus, how I can restore proper behaviour. Somehow, 'EFFECT_MISSIONARY_ACTIVE_BUDDHISM' is only ever referred to inside Civ4EffectInfos.xml? How can that be?
EDIT2: The answer lies here: https://forums.civfanatics.com/threads/quick-modding-questions-thread.351519/page-320#post-16324956
Last edited: Nov 21, 2022
Please, if you see a mistake in my posts - spelling, grammar, punctuation, or whatever else - point it out. How can one learn from mistakes, if one is not corrected?
There is no wealth like knowledge, no poverty like ignorance.

1) I've got the impression that, when I play as the only human player on Noble, and I start out with Mysticism, and I research Polytheism first, I have a reasonably good chance of founding Hinduism, but if, in the same situation, I research Meditation first, my chance of founding Buddhism seems to be basically zero. Is there something to that impression? And if so, why is that so?

2) What happens to the Apostolic Palace if there is no longer any Civ that has the AP's religion as their state religion?

R82 said:
1) I've got the impression that, when I play as the only human player on Noble, and I start out with Mysticism, and I research Polytheism first, I have a reasonably good chance of founding Hinduism, but if, in the same situation, I research Meditation first, my chance of founding Buddhism seems to be basically zero. Is there something to that impression? And if so, why is that so?
Click to expand...

Med is a bit cheaper than Poly, and any civ that starts with Myst has a good chance of going straight for it. Depending on the start and best tile, you may not be working a tile with commerce on it but another civ may be working commerce.

R82 said:
2) What happens to the Apostolic Palace if there is no longer any Civ that has the AP's religion as their state religion?
Click to expand...

Certain conditions must apply for certain AP decisions/votes to take place, but regardless of religion, the owner of the AP qualifies for residency. Here's a wiki for you:

A very belated thank you!

Now something unrelated: in a recent game, something pretty weird and confusing happened to me. That is, I got access to iron at a time when, as far as I could tell, I shouldn't have had access to it yet. One of my cities was working an iron mine and was connected to it by a road, but the city shouldn't really have been trading with my capital yet. It had neither a road connection nor any kind of river or coast connection that I had already explored.

Let me illustrate it with a series of screenshots: 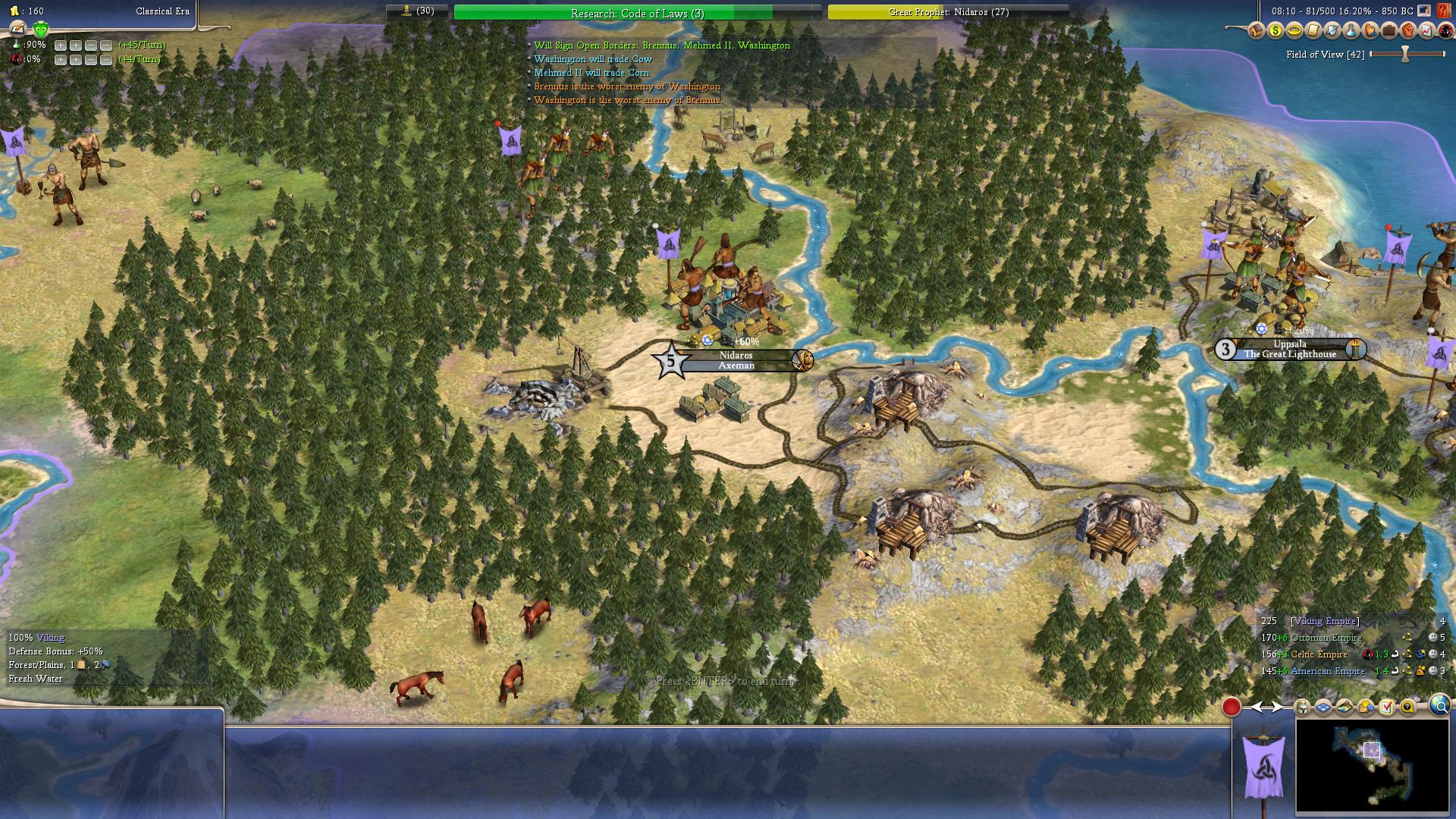 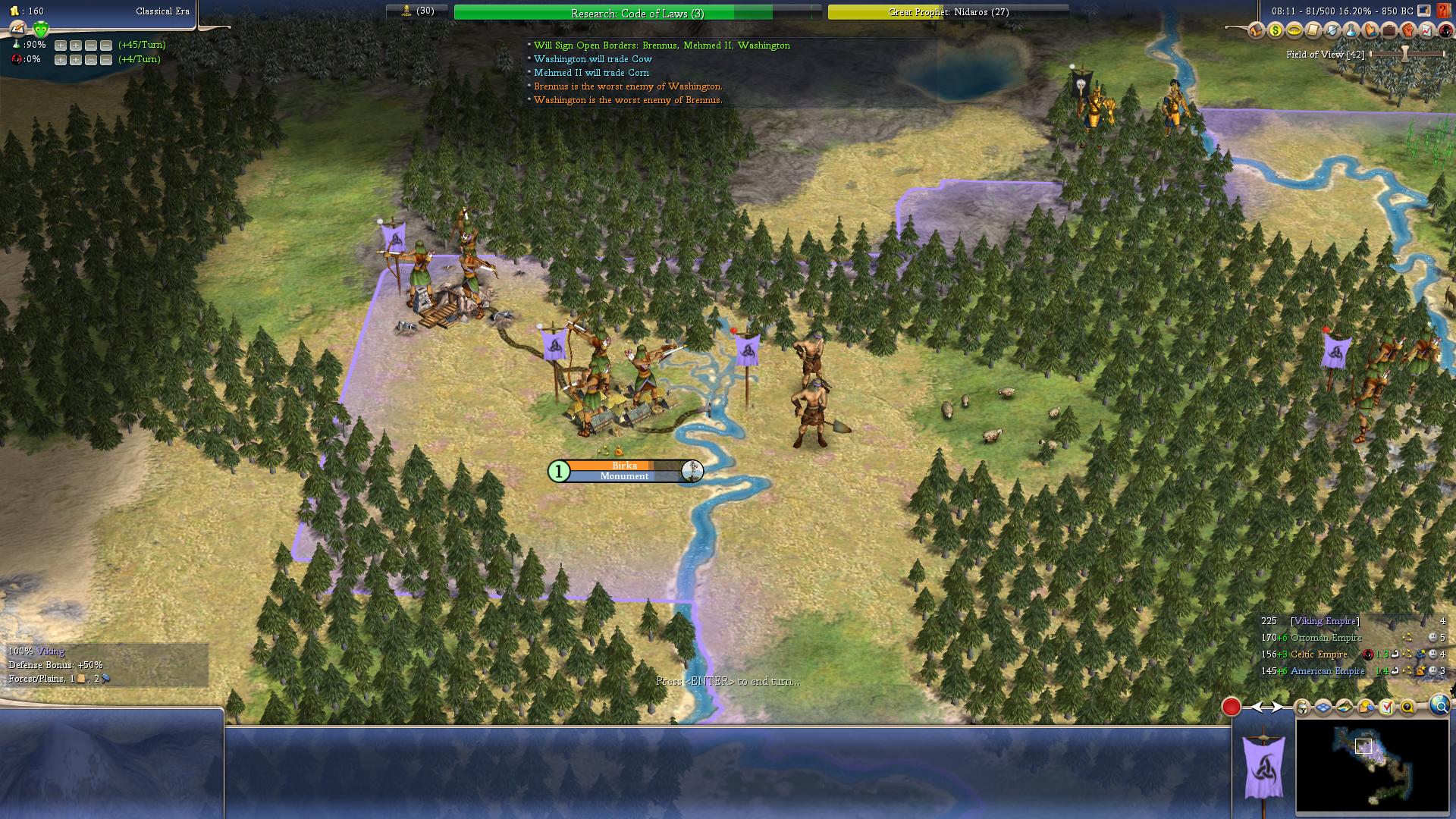 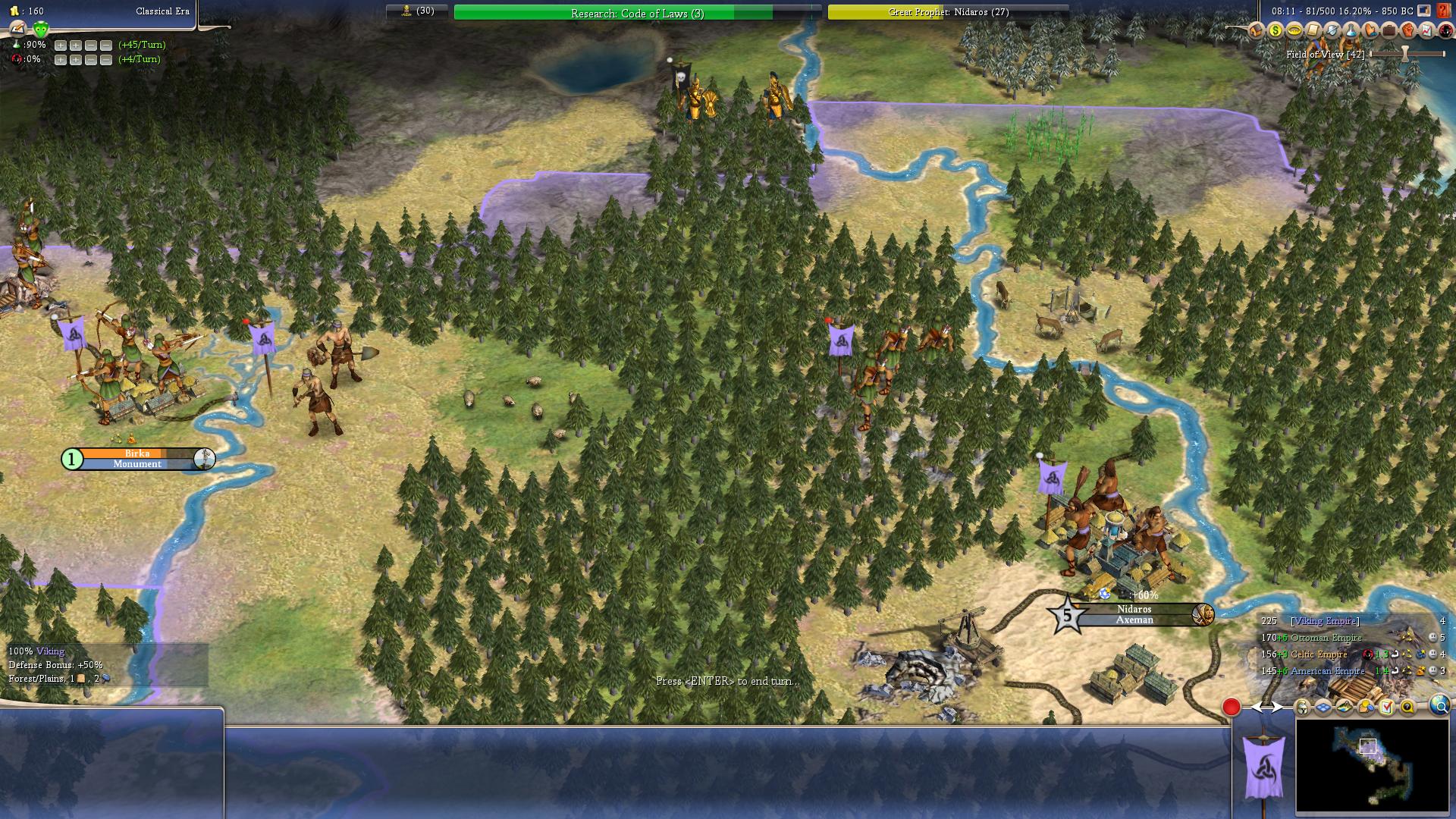 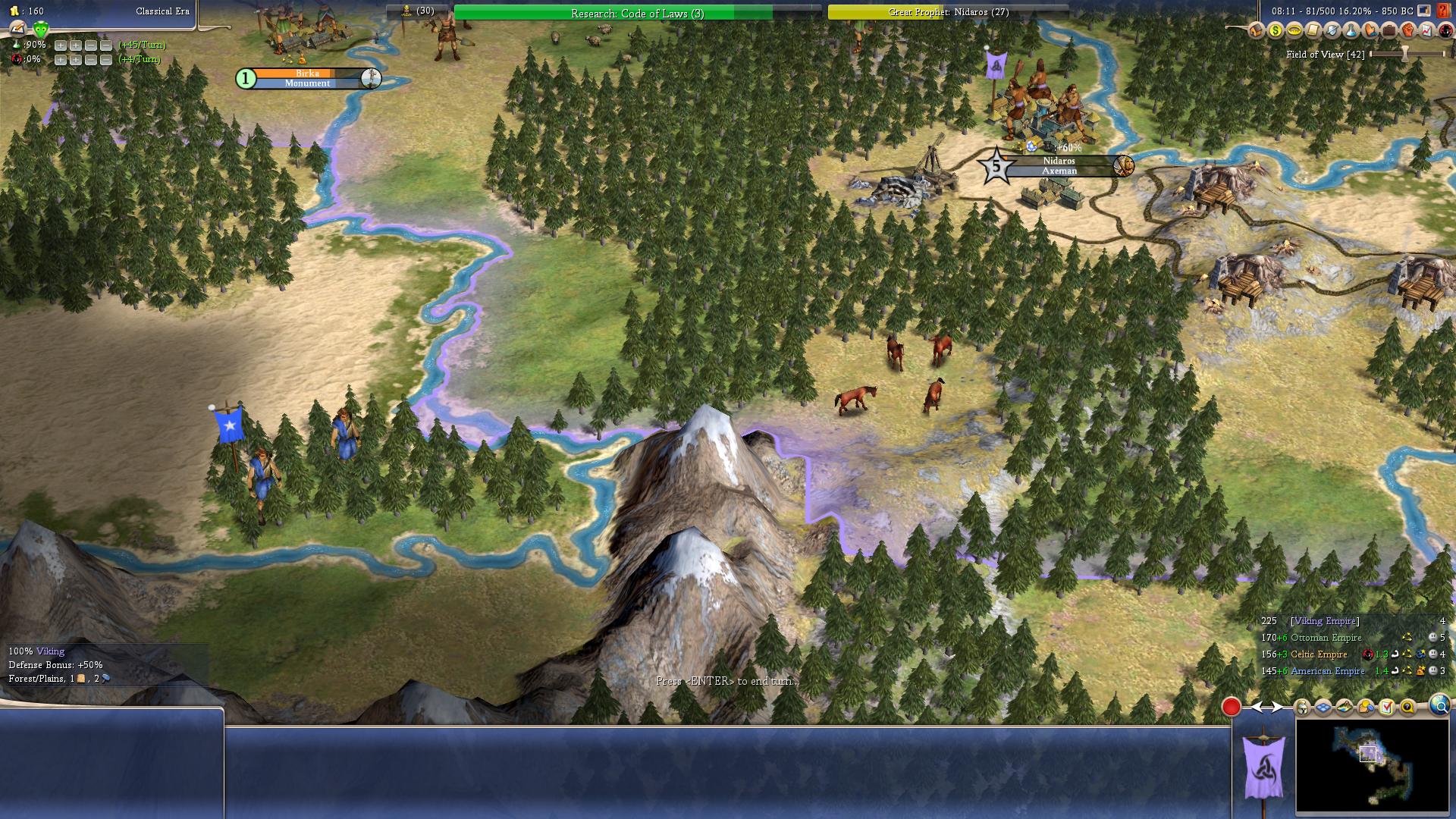 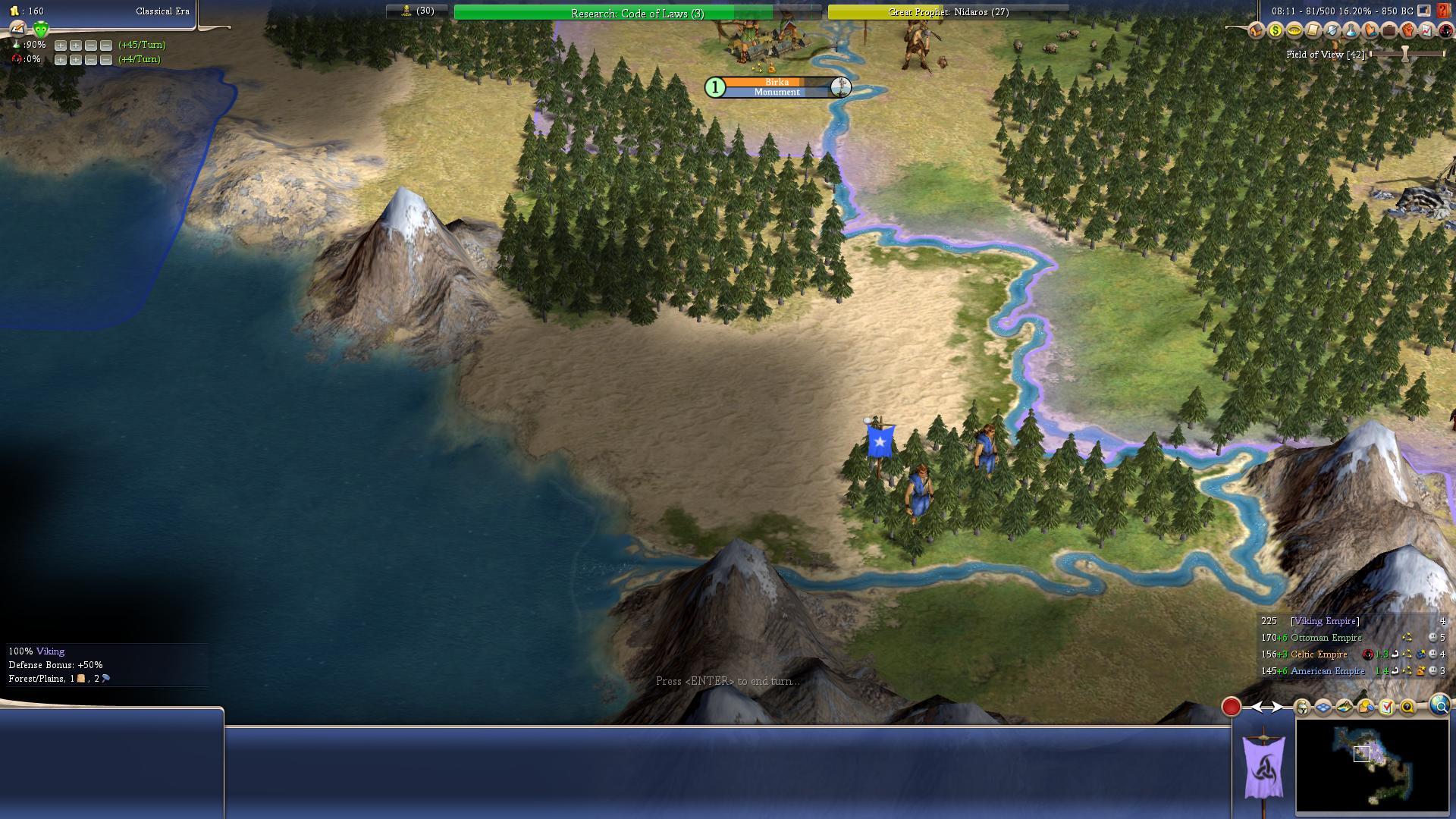 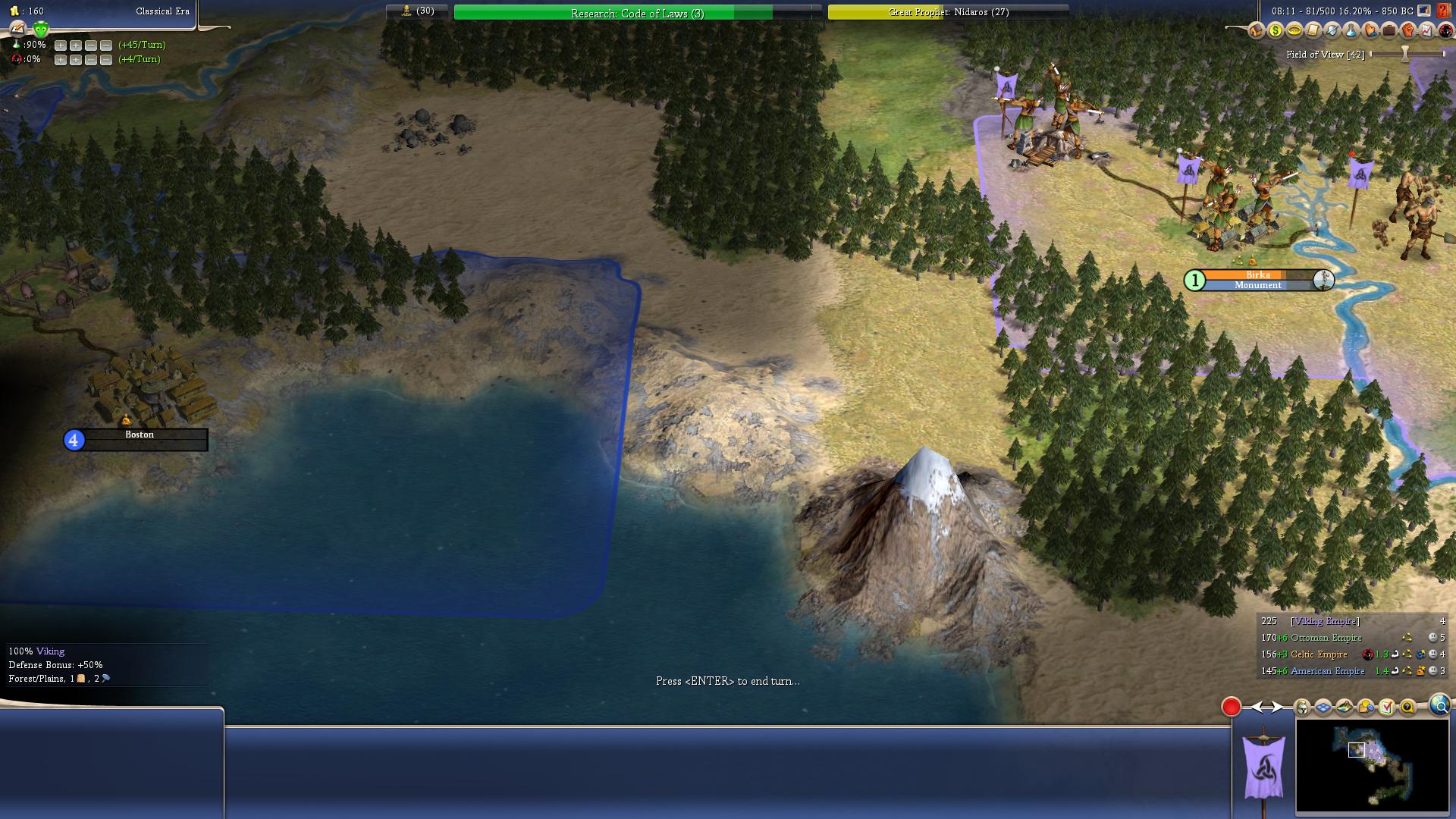 As you can see, I was already working on a road from Birka to Nidaros, but it was far from done yet, and I hadn't yet explored enough of the coastline for a water route. Now, both Birka and the rest of my empire were already connected to the Americans, but I didn't have an Open Borders Agreement with them yet, so that shouldn't have mattered. So what was going on?

next to name it is connected to your capital)
Z

Yes, unless one of the two civs is running Mercantilism, I think.

The greatest teacher, failure is.

Trade routes can also be one-sided. If one side has Astronomy (for example), only that side will get trade routes to you (not you to them). It can also be "weird" in early game with watery maps where "Ocean bridges" (Ocean tiles that connects 2 land masses but can be crossed only inside culture borders) can make one-sided trade routes possible too (in crazy instances we can talk about 200+ commerce generated for one side without nothing in return).
F9 demographics shows this "trade balance" at Export/Import list (All trade routes (total value of

Not exactly question but "Today I Learned" that (Cho Ko Nu) does colleratial damage to siege too! Zillon years into game and only now realized that, haha.

Spoiler :
Had to write this down after I finally "achieved" Emperor/Large/Mara game won using only them for attack (in total lost ~260 of them, fun unit for attacks from sea, on other hand Knights turned out their week spot (as generally one wants to go "Drill line" to scratch that 1st defender of city but Knights ignore first strikes, drastically increasing odds of no damage at all

elmurcis said:
Not exactly question but "Today I Learned" that (Cho Ko Nu) does colleratial damage to siege too! Zillon years into game and only now realized that, haha.
Click to expand...

Bombers and Cho Ko Nu's do collateral damage to them just fine.

for collateral damage), so it takes 5 Cho Ko Nus to do the same collateral damage as 3 Catapults.
They can attack from the sea though unlike siege ya.
Last edited: Jan 7, 2023
Kaitzilla vs. The World
The Largest Civ 4 Deity playthrough in history!​
C

The collateral strength of 3 for Cho Ko Nus does not mean they deal half damage compared to if they had the full 6. It gets weighted vs opposing base strength. For example a catapult hits a knight for 7 hit points, a Cho Ko Nu hits a knight for 5 hit points. If the Cho Ko Nu had the full 6 collateral strength it would also only hit for 7 like the catapult.
You must log in or register to reply here.

Hello Again - and a couple of quick questions
2