Today the 24th of may, it's exactly 5 months since I started the creation thread.It has taken very much time and work to finish this great project and I this would be nice to play.It's some small bugs that we can fix, specially the tech-tree.So here is a short history brief.

Vietnam was, together with Cambodia and Laos, a part of the french colony in Indochina.The country was occupied by the japanese in WWII, and on this time decleared the Viet Minh-movement leaded by the communist Ho Chi Minh, Vietnam for independent.After WWII france refused to acknowledge Ho Chi Minh's government, and it broke out a war between the french and the vietnamese.This war ended with defeat for the french in the battle of Dien Bien Phu in 1954.An international deal shared then Vietnam in a communistic part in north and a non-communistic part in south.Almost immediately it broke out a civil war between the two countrys.From 1959 got the communistguerilla in south, that was called Viet Conq, help by North-Vietnam.
The americans was worried by the spreading of the communism, and sendt military help to the south vietnamese.Then the conflict built up in 1965, USA began to send troops.......

If you'd like to know something more about this war, check out these two links.

About the weapons used in the war.http://islandcitytv.com/Honors/html/warAndWeapons2.htm

At war with ALLIANCE 2

Units in the scenario

I think that was enough to know for now.

Thanks to all these peoples and to all they who have posted in the creation threads!!!

So to the goodies!

This is the first version.Later versions comes of course.......later!
The file is 31,5 MB.

It's a huge file, but you get payed for it when you play the scenario.

EDIT:After the release it was discovered a lot of errors.So I took a closer look on it and fixed it.Here is a update of the BIQs and the text files.Just replace the text folder with the new one and the BIQs with each other.In the file it's also another BIQ VietnamWar SCO.In that BIQ it's the sea cut off, but in the other one, the sea isn't no longer cut of.

- Cobra, Mobile SAM and Flak is now movable.
- Have placed and deleted some units.
- Reduced the bombard strength of the Bomber.
- Fixed the previous errors.
- And some other things.

Here is the file:

Any bugs, comments, suggestions or something else about this scenario.Feel free to post.

The south- and north-vietnamese border. 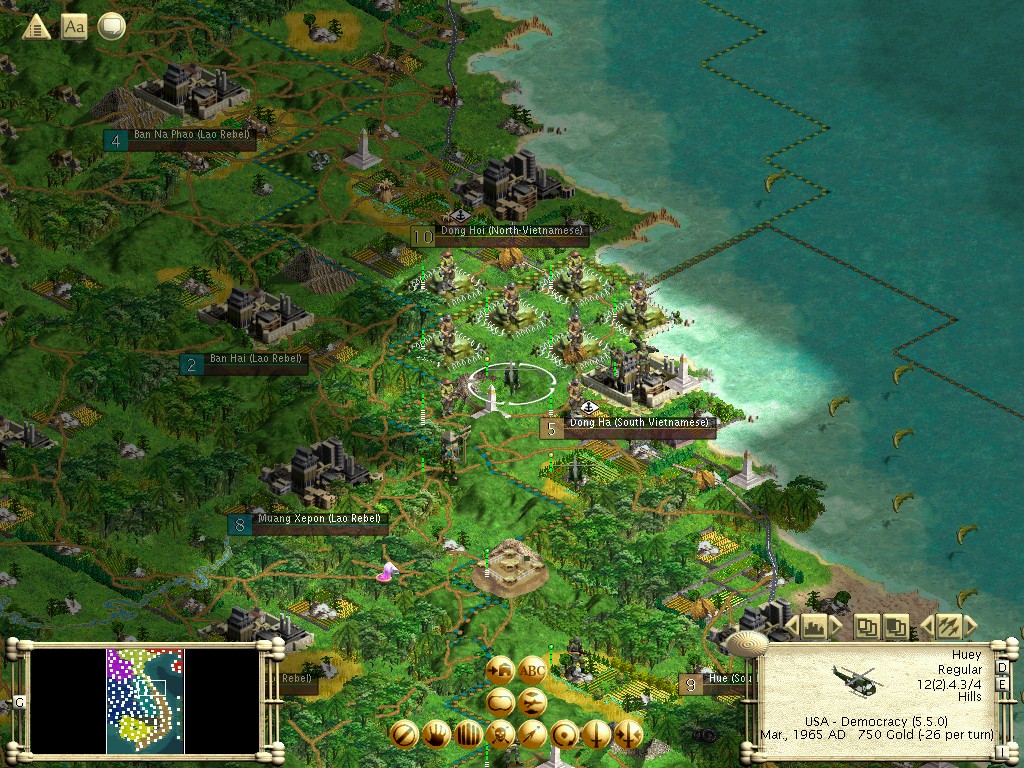 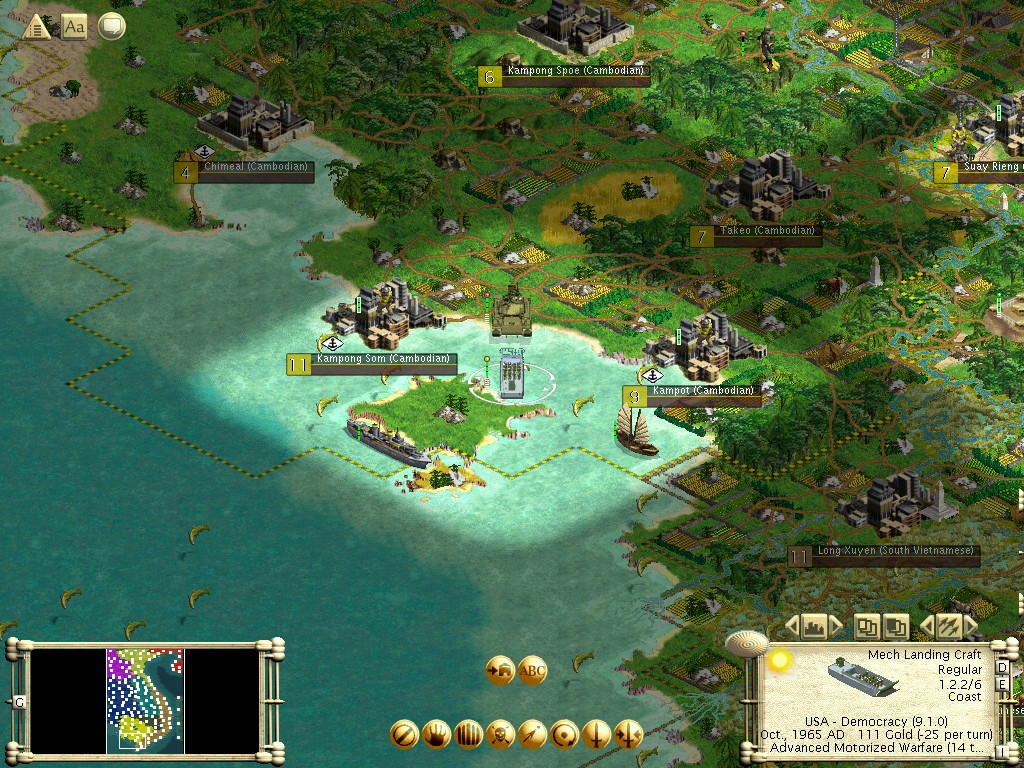 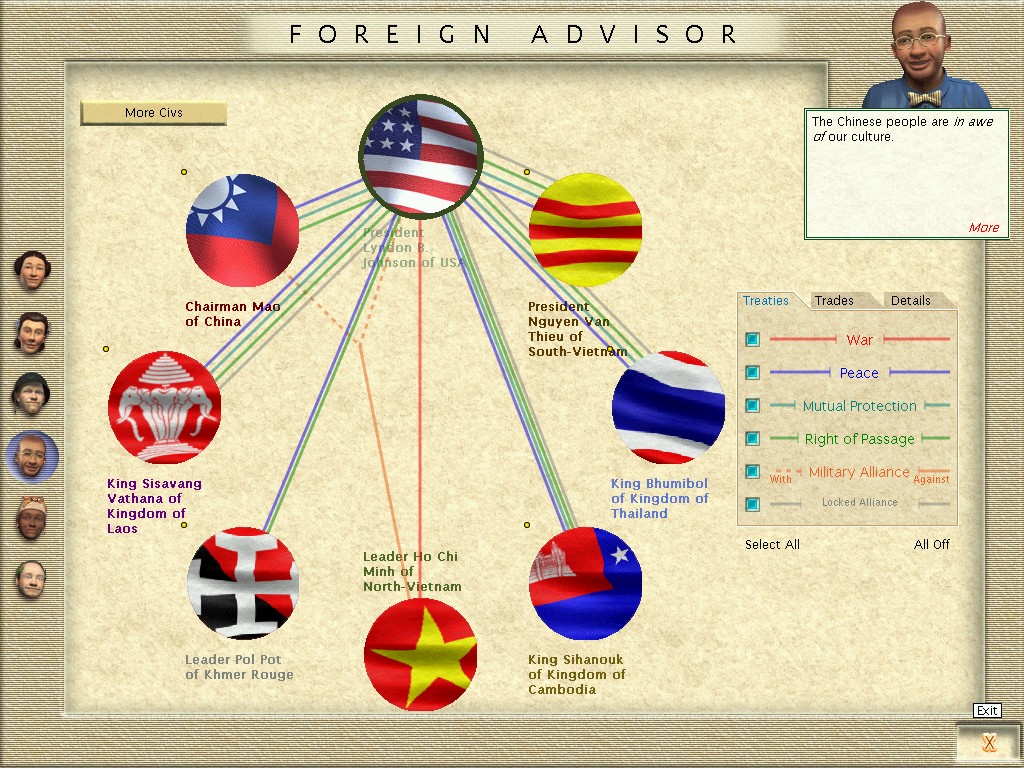 Thanks El.Could you post the Ho Chi Minh image from the editor?

i'm not at my home pc right now but i will be home for lunch soon and can do it then. this should be a winner!
Age of Imperialism Deluxe; 1895-1924 | AoI v4.1 Bug Fixes
The Vietnam War Deluxe | El Justo's Neglected Cookbook Thread
Current Succession Game: El-J 03: Going Rogue, AoI Style! | The Cold War Deluxe: The Fifties

this looks like a beautiful scenario, I'm downloading now

I like how the map isn't too big so most, if not all pc's will be able to play without lag

Hey, whenever I try to load it up, it says:


Any idea what's wrong? It looks cool, hope I get to play it!

Yippyfn said:
Hey, whenever I try to load it up, it says:


Any idea what's wrong? It looks cool, hope I get to play it!
Click to expand...

yes. it appears that the pediaicons.txt file included in the DL is missing that particular entry. if you open up the Pediaicons.txt file for the scenario and add that specific text (ICON_BLDG_Brothel) to it, it should work. if you can't get it to work right away or are unsure how to add this entry, i can post my pediaicons.txt file for this scenario, of which includes all required entries.
Age of Imperialism Deluxe; 1895-1924 | AoI v4.1 Bug Fixes
The Vietnam War Deluxe | El Justo's Neglected Cookbook Thread
Current Succession Game: El-J 03: Going Rogue, AoI Style! | The Cold War Deluxe: The Fifties

Eh......I think I have changed some things in the pediaicons.txt.So I can post it here.Is that ok?
M

Looks Great! It would probably be best if you post the new pediaicons.txt file. It would be much easier to replace the file, rather than us writing in new lines.

I'm going to attach a tech-tree upgrade file in the first post when Bobisback finish it.And there can the updated pediaicons.txt file be.It's a pity to discover such bugs, but it is just that it is.
Y

I'm sorry, but it's still not working.

Hmmmm, I never got this error, but now to the real reason I'm posting

After about 5 hours of uninstalling,reinstalling,and backingup files I have finally fixed some error to do with my version of conquests (this error was around for awhile not allowing me to play any dled scens, although this looked soooo good that i decided to fix it)
I'm in the middle of the game now as the USA, all I can say is this is one of, if not the BEST scenario I've ever played!!!!

To give you an idea of how good this is - I haven't actually played civ in about 3 months and now this made me addicted again!!! I actually can't wait till I'm done typing to go and finish the game
The art is just plain beautiful, the balance is excellent, and the new units are excellent, plentiful but not overwhelming. The mountains, which I would never use in a normal game go perfectly with the deep green of the rest of the landscape, overall, the map definatley gives the whole scenario a chaotic feel(which I assume is intentional

) . The fire bases are neat concept and act kindof as a place to garrison/heal units and have good protection. Also it has an excellent turn limit.

Now to things I think could be improved -
Tech tree - well what can I say - just make it more obvious which techs go to which techs, some overlap, there is a very unorganized feel to it
Civilopedia - just get the entries in there, they don't have to be pretty or even have hypelinks I just want to be able to know the enemies strengs/weaknesses before I decide on a strategy (in other word I don't want to get slaughtered unexpectedly

)
Units - NLF infantry are sometimes invislible when they are attacked/attaking, Huey attack is VERY hard to see i had to squint just to see the tiny white flicker also the death is kinda wierd (except for one angle it's just a tiny white explosion/spot), I don't know if the USA is ever able to create ships but I hope so (I'm not knowlegable of Vietnamese history so ignore if it's historically correct), are there invisible units? my units seem to be attacked via ZOC yet i don't see enemies.
Scenario information - the opening box (aka scenario information) should be updated, now it say the US has just discovered farming, irrigation etc...

Other than that this scenario is excellent,
If the above problems are indeed fixed I would say it is comparable (if not better) than some of the conquests!!!!!!
GREAT JOB!!!
I BOW BEFORE THEE

Edit-I got it to work! Thanks for your help guys, I really appreciate your patience with me! Expect a playtest report soon.
You must log in or register to reply here.