South Africa: What you should do is use the Workshop downloader and extract the file.
​

- Greenland specific decisions are not showing in the Decisions-screen (other decisions like the ones with JFDLC are there)
- There is no text showing when first meeting Greenland as AI.
- In the social policy screen, it mentions Cultural Ideal "Colonial" but shows the 3 policies belonging to Northern
- UA: Walrus spawns with a camp on it and indication of 4 happiness and 1 food/prod/gold when worked. However, when city expands to include the icetile with walrus, it is not a workable tile for the city or doesn't provide yields from it in any other way (see logs) Also,walrus does not count as a luxury resource for happiness (not showing in happiness calculation). With this, assume that other feats involving Walrus (trade route to city with Walrus, Mead Hall extra movement to units when working Walrus are also broken....
- The WLTKD on Mead Hall was quite short (only 4 turns) which didn't feel that beneficial. Perhaps better to have a normal length WLTKD?

Starting game with Kanem Bornu, just noticed some TXT_KEY_... with the Askawr (also in Civpedia for this unit and it's unique promotion), but also Decisions. 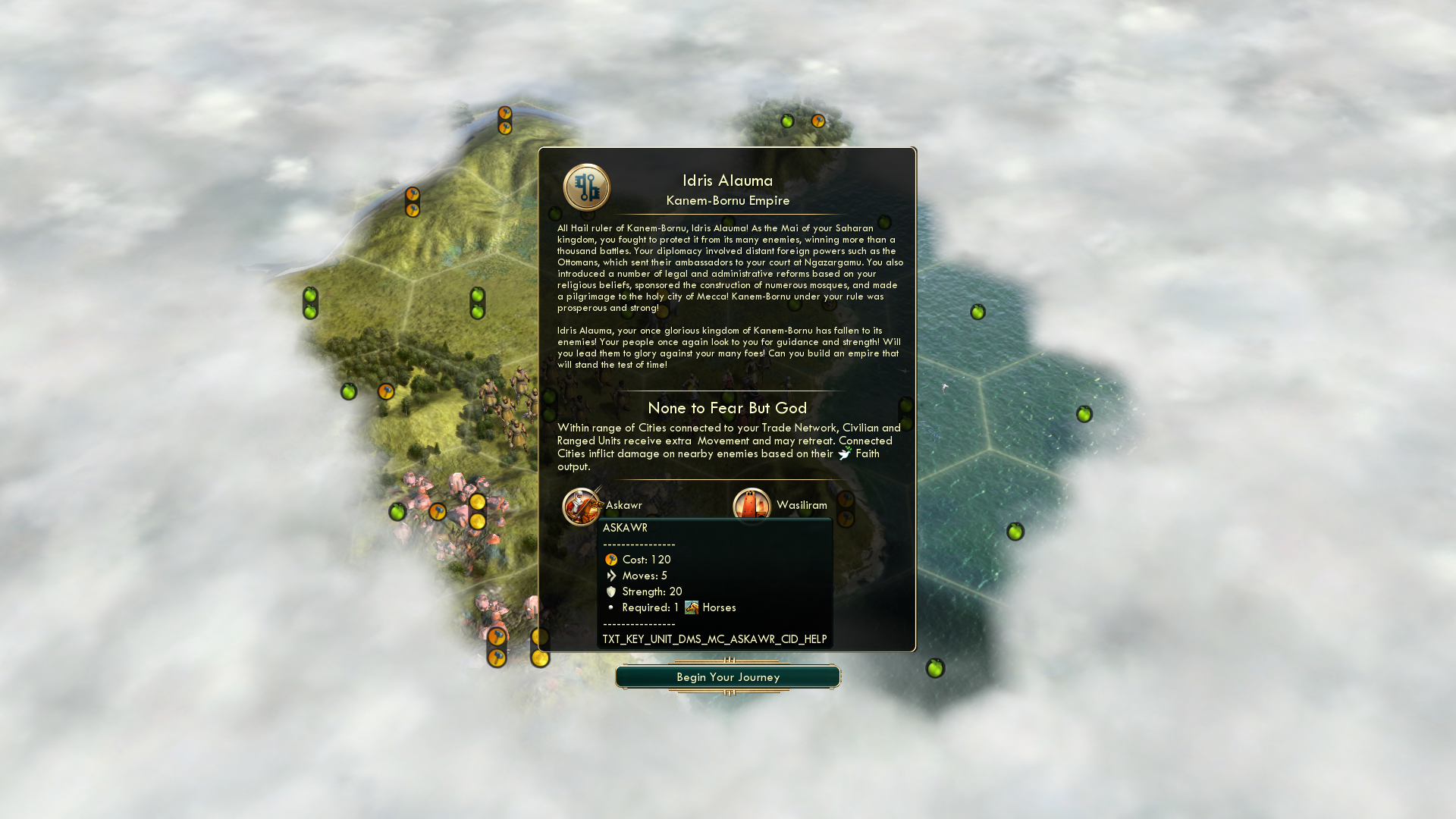 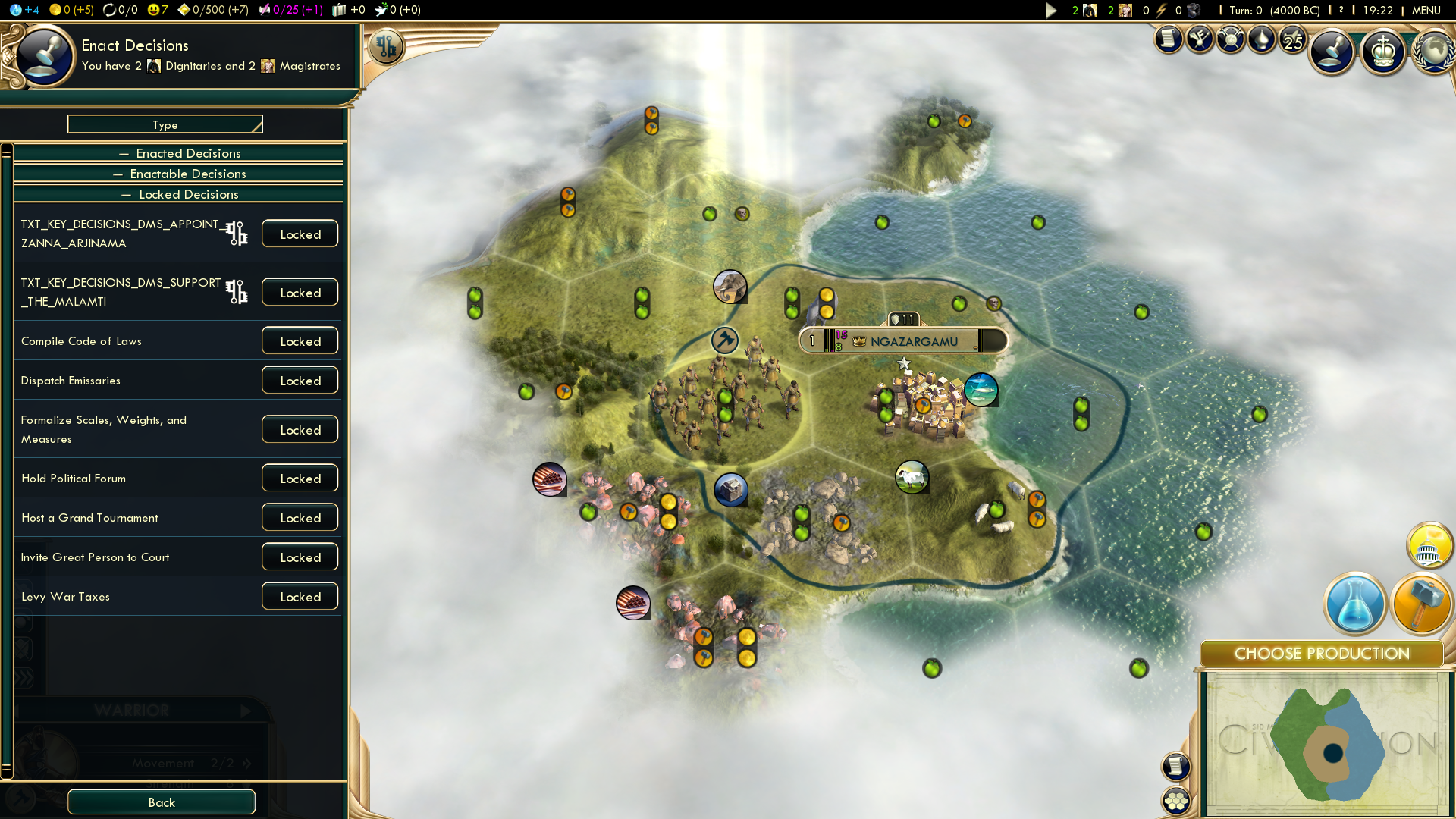 
Stef09 said:
Starting game with Kanem Bornu, just noticed some TXT_KEY_... with the Askawr (also in Civpedia for this unit and it's unique promotion), but also Decisions.

Could be to do with the CID support being outdated I guess, although iirc the TXT was still working fine in the Days of Thugs...

But yea lad plz I wouldn't have expected to have to remind you that logs are crucial to finding the sources of bugs...

Didn't think relevant for this one, since already on turn 0, but herewith...

Do you even have CtD enabled? Is not CD - cultural diversity?
​

SLGray said:
Do you even have CtD enabled? Is not CD - cultural diversity?
Click to expand...

I am not questioning the mods themselves. I was just wondering if the member meant cultural diversity or cities in development in his/hers mod list.
​

SLGray said:
I am not questioning the mods themselves. I was just wondering if the member meant cultural diversity or cities in development in his/hers mod list.
Click to expand...

And here I was wondering if you were going to release Ithaca in honor of Odyssey day...

How are the remaining updates coming along (Faroe, South Africa, ..)? Hope you can get around to working on/releasing those soon!!

Do you mean updated to today?

Updates addressing the bugs reported just a few posts ago

Hi I'm currently running into an issue with the Dervishes and Kasanje where they refuse to appear on the civ selection screen for YNAEMP or for a vanilla game. I have checked the logs, and they are both being registered in the database (as seen in stopwatch.log). Any help would be much appreciated!

Dervishes updated to v8 and Kasanje to v9.

Both:
- Solved issue where neither civ appeared in the civ selection screen when loaded together (actually rather, I couldn't replicate the problem, but tested with all the mods listed in Limerickarcher's report and more and it worked fine - might have fixed it without realising it tho).

Kasanje:
- UU: Solved issue with ctd when capturing barb and CS worker. Unfortunately, there is still an issue where capturing CS workers will sometimes just delete the captured unit - still better than a ctd tho.
- UU: Added further limitations to the amount of Mavalas spawning to not clutter map too much .
- Support: Fixed compatibility with JFDLC (broke CID support tho), so that Mavala units actually work as intended (provide Citizens upon being expended).

Thanks for the updates.
​

Awesome job! Seems quite complex and I love the funky civ colour, + an UI that is intertwined with the entire design

Yaay!!! The Malagasy Kingdom is now a full civ (not just a "minor" city-state)! Thanks a lot!
Steam-Only is unfair, especially to Offline and Mac users. Steam should be OPTIONAL to all, not mandatory. Socratatus
You must log in or register to reply here.

Can someone try to do a Scramble for Africa Mod?