Challenge: A Billion of People!

Location
In the dark

JujuLautre said:
Post a save more than screenshots; only with a save can people track a potential bug
Click to expand...

Can't even load the save myself. Which version of RFC is that ?
Want to win on noble? Check my guide

Location
In the dark

JujuLautre said:
Can't even load the save myself. Which version of RFC is that ?
Click to expand...

Don't know. It might be the one that came with BTS and it might also be the most updated one. But, I'll redownload the newest update and see if it works.
Edit: also, wasn't opening through the link for me. Kept on wanting to go to Warlords when it is from Beyond the Sword... Attempting it now with the reinstalled RFC.((was creating a few civs for my mod instead)) Oh yeah, forgot to mention; It was the fully updated version. Okay. starting over. might work now.
The Kingdom of the Two Sicilies in A Tale of Common Things
Lesa in End of Empires
Fascist Austria in The Bonaparte Legacy
The Kingdom of Brittany in Capto Iugulum
A player of NESCraft
D

Well I'm going to try Persia, because I hope the power of satrapy will help me with stability in conquest. I'm using the latest version of RFC so I hope it's okay. My plan is to ignore my west and attack east at the start. Gave Persians a try, made it by 1799. could have been 1780ies had Egypt not revolted.
I'm sure it could have been done much faster, played rather casual and never pressed the stability.

Settled Pathragada with start settler and Damaski as soon as Arab starting zone had triggered. Cleaned southern china shortly after collapse and turk conquest rolled on to greece. Rest of Europe was too clustered to get decent city growth. Settled North america right after astronomy and south when galleons came back.
Vasalized Russia when they asked (to avoid them doing silly stuff) and greece,tyrkey,khmer when i did not need more of their land. To avoid collapse and for viceroy stability. Got Portugal by mistake at some point. So I was trying to get as much people as I could with only 1 city (turned One City Challenge on). Starting as maya, walking north to build my city at the best spot. After a while my research was too low to research any techs (took 20+ turns to research a tech), so I decided to turn the slider to 0% en buy all the techs I would need. Since I used all my extra population as merchants, the money per turn was very high. Wait, why did you turn all your extra population into merchants? Well, a Great Merchant not only gives a gold bonus, but also +1 food. In total I got about 14 of them (+14 food = +7 pop).

Figured out nobody was going to trade me corporation/medicine so I decided to research it myself, but failed at getting sushi. I bought the techs up the refrigeration line and researched refrigeration myself. I was able to get Cereal's which gave me another +7/+8 food.

In the 2070's America started eating my BFC tiles, even though my culture was much higher in the tile (about 79%), and they suddenly declared war on me. At this moment I gave up. It became too boring and my people were starving; I ended with pop number 52, which represents almost 310M population.

Note that this game was just for fun, and there is a lot of improvement left. E.g. I adopted pacificm asap for the 100% GP points bonus, but forgot to get a state religion. And most probably I could get even more food from Sushi instead of Cereal.

The biggest growths came from:
1) Opera House, which unlocked unlimited happiness
2) National Park, at this point I didn't need to get as much health resources as possible, as the unhealthy from population was removed
3) Biology, because every farm will get +1 food

Again this game was just for fun. If someone succeeds in getting 1B pop, you are a very good player. If someone gets 1B pop before 2020, you are a hero

Please forgive me if my English is not that good

I have always wonder, if 2 billion people is possible. So one funny viceroy game as Germany answered that question. In deed it is

Gave this challenge another shot, like my previous attemp with only one city as Mayans and found out this would be impossible (actually it would take a veeeeeeeeeery long time but not completely impossible). The problem is that I need another 40 Great Merchants to reach 1B people, and by that time global warming would have turned tiles into desert. It would require even more great merchants and so on... Without global warming I guess it is possible to achieve 1B people in 1 city ( = 75 population number) around 2500AD.

I managed to reach the 55 population number (around 371 million inhabitants) in the 22nd century. That's 3 population numbers higher than my previous attemp. The differences were getting representation early enough to keep science up, focus on military (invaded America twice and razed cities, 2x Washington and once a city to the southwest of Uxmal. I founed Sushi this time instead of Cereal but it was actually worse because I didn't have any of the resources myself and had to trade everything (gave a food bonus of +1/+3 to a maximum of +5, depening on AI wars). At the end global warming turned 1 grassland to a desert, removing the tile's food which made me stop after the next growth.

Still a big city though 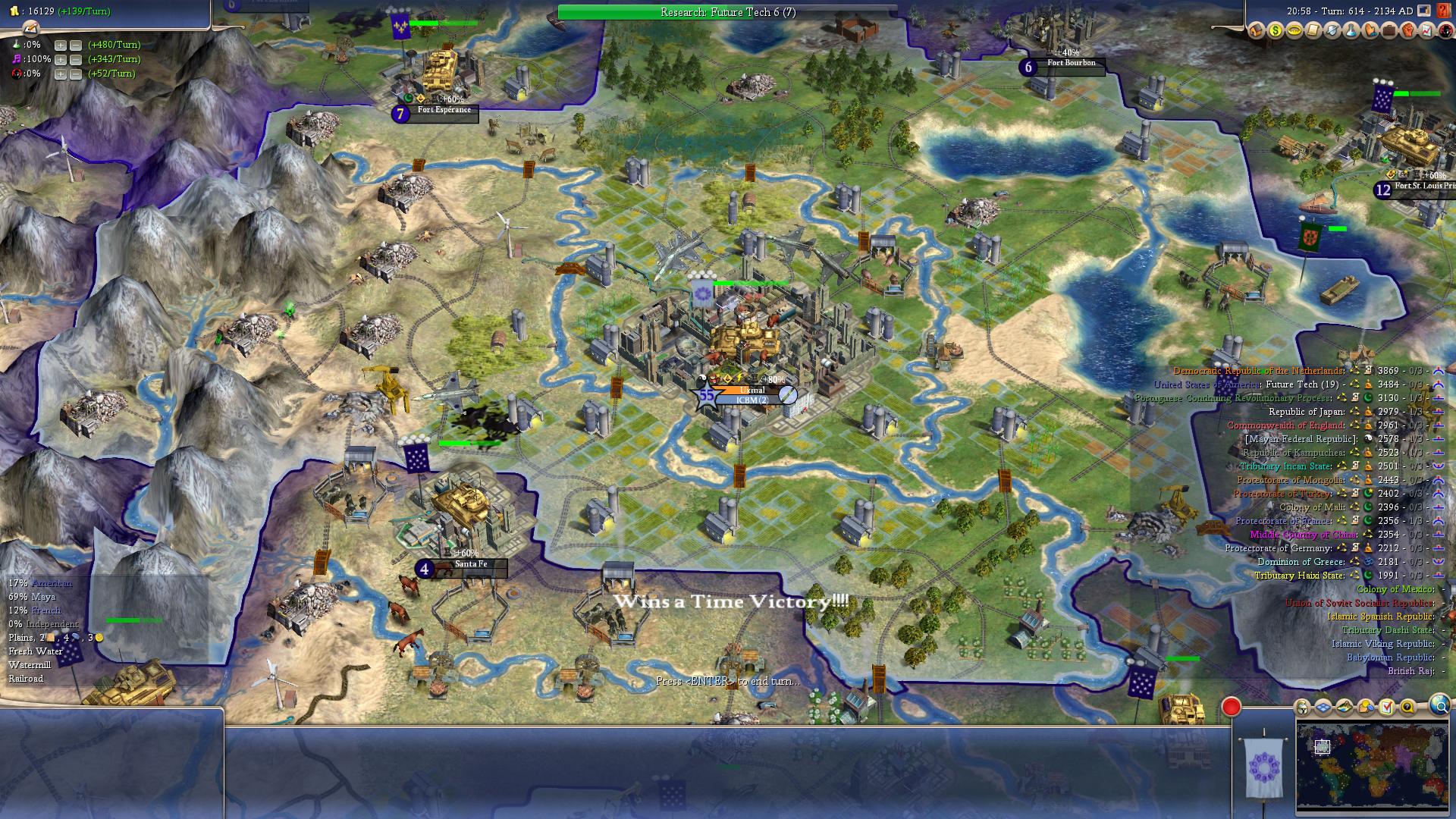 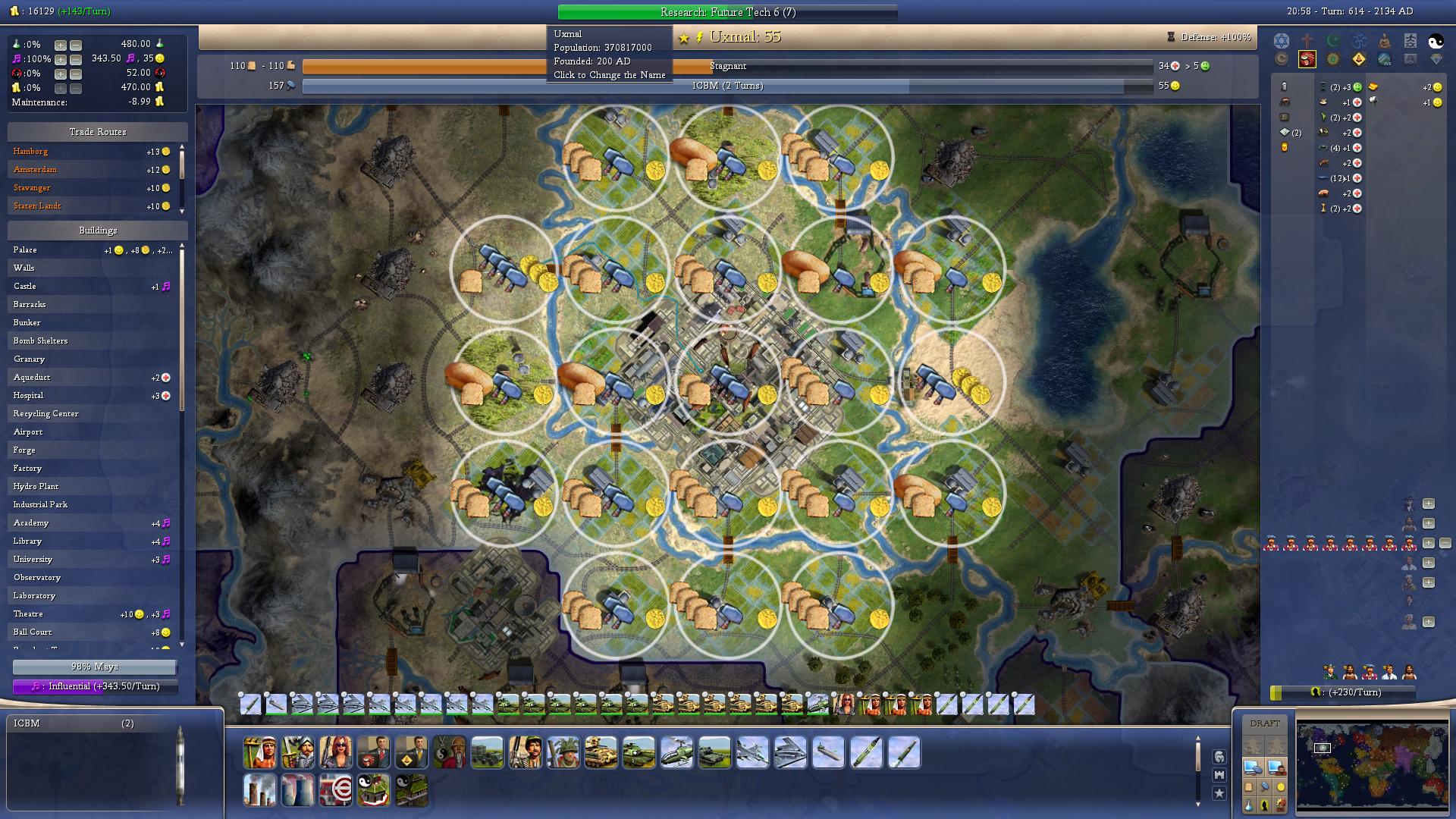 Challenge: A City of Gold

The Players Revision of World's History[RFC:MP]
2 3