Thank you! Can't wait to see your amazing units in action

Hi, just a quick update and a small teaser

I continue adding new technologies in the Rules.txt file before I start from scratch in a new 4-map game using the fantasy pre-made game. But in the meantime I have prepared a new People.bmp file using @Fairline 's amazing units included in the game and some background flags I've drawn, I love the final result and gives a nice atmosphere in my opinion

So the happiest citizens are the most loyal units for each cause. Content citizens are regular troops, and then unhappy citizens depict "troublemakers" for each side, including Repoublican simpathizers (working class) for Nationalists and the CNT (anarchists) for the Republicans.
Specialists depict police corps (entertainers), traders (taxmen) and diplomats (scientists) for each side.

In-game view of Barcelona, my hometown:

I hope you like them as much as I do!

Ok I did minor tweaks, moved the coloured icon to the left so it's visible on big cities where the citizens stack to each other.

Also changed some units and revised alignments. Now I'm entirely happy with it

I've added yellow wings and tail to the Boeing 281 (export version of the P-26), as apparently it's how it actually looked like. It's also good to bring more colour variety as most of the Republican airplanes were all plain olive drab! 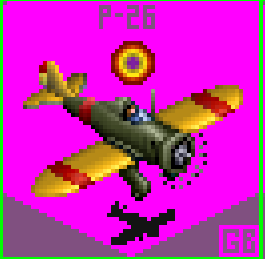 I'm putting huge effort on historical immersion. The completely redesigned tech tree will not only allow the different foreign reinforcements to arrive (as per the previous versions of the scenario), but will actually allow players to take historical decisions that might change the fate of history... 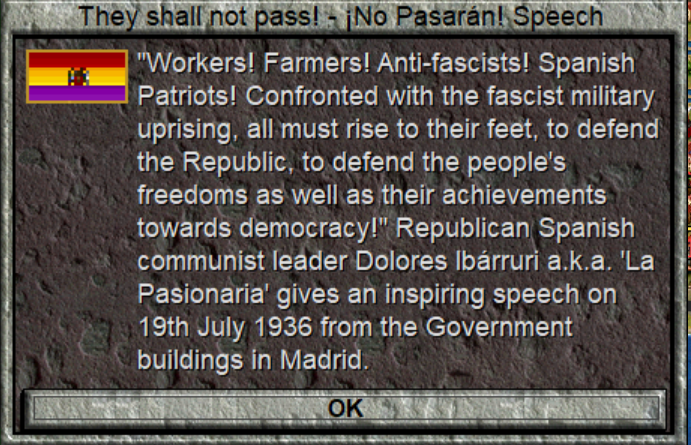 These days I'm investing loads of hours in the scenario as I see myself quite motivated with it. I have been preparing the 1st of the extra maps I announced on a previous post: the political map. Today I finished all its terrain graphics and I can show you some PoC screenshots.

The way it works it's simple: I'm using a terrain slot for each country/civ. Then its resource #1 represents major cities (big flag) and the resource #2 a minor city/objective (small flag - unit shield actually). The map itself doesn't have any "civ" city, it's just plain custom resources and the city names are just TOTPP labels (landmarks).

See an example of western Andalucía and the Strait of Gibraltar area at the start of the war: 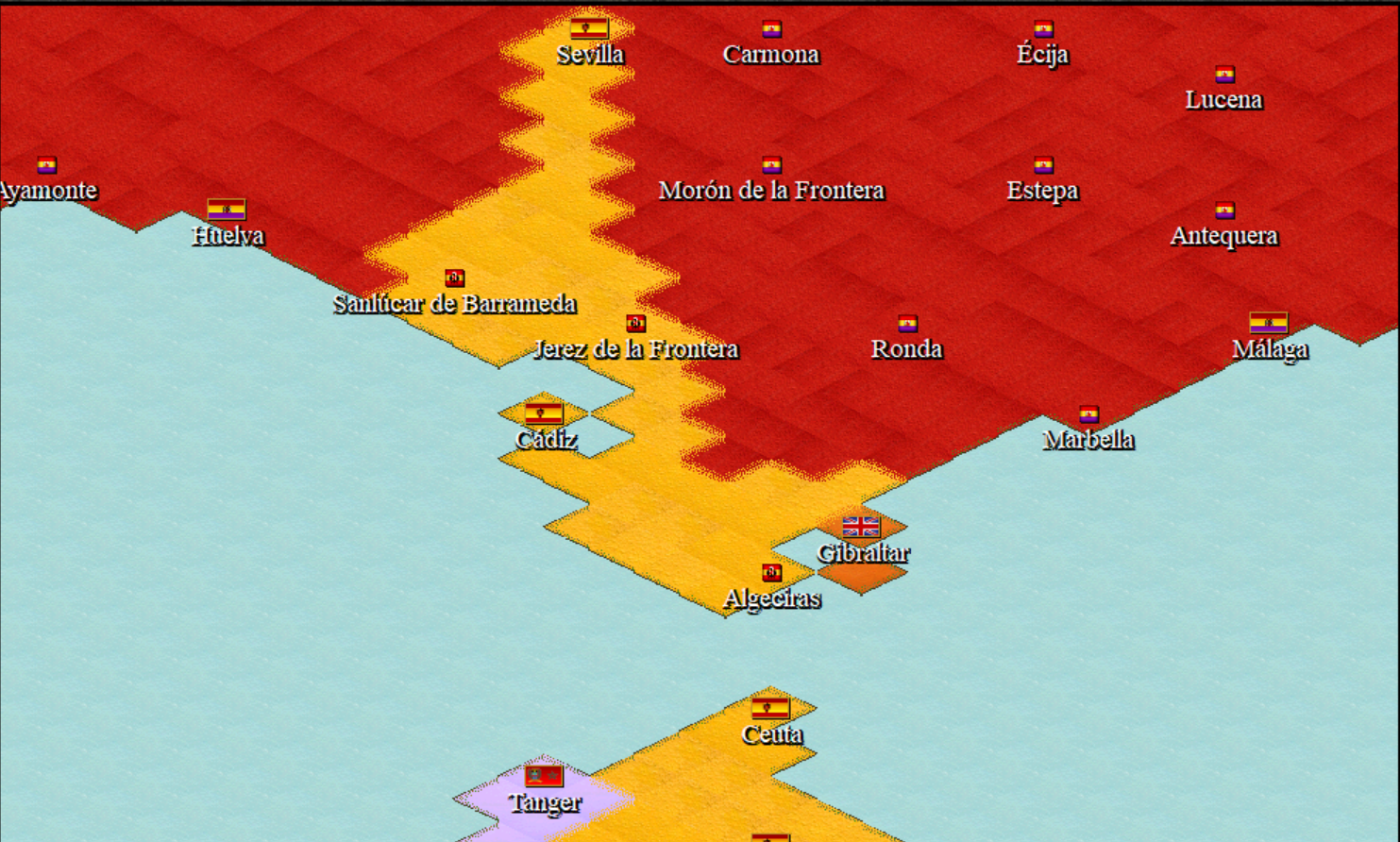 This is how some of these terrain rows look like. Each country has the own civ colour, with some texture, and the resource flags (Yes, there's room for Andorra to be featured 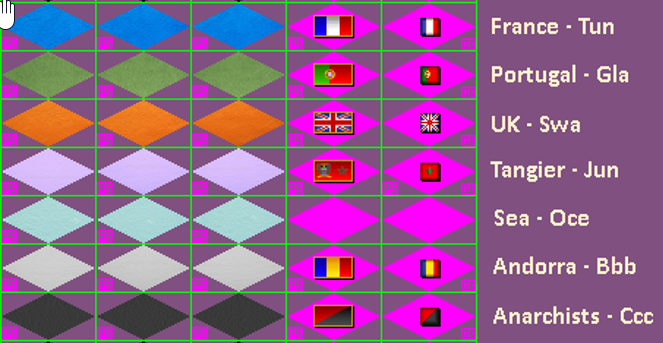 What do you guys think of the feature?

I really like the idea of a political map because it allows you at a glance to see all the areas under your control. It can also be used as a strategy tool to determine where you may want to launch your next offensive or to track your enemy‘s progress.

Did you envision other uses for it?

tootall_2012 said:
I really like the idea of a political map because it allows you at a glance to see all the areas under your control. It can also be used as a strategy tool to determine where you may want to launch your next offensive or to track your enemy‘s progress.

Did you envision other uses for it?
Click to expand...

Hi! The political map is, as you say, just to have a quick check to see what you control so far and how the frontlines progress. It's merely for the visuals as I find the feature really cool and with the different terrain tiles, custom resources and totpp landmarks it works well in my opinion.

For strategy I plan a completely different map (war room style) which will highlight all military objectives, strategic resources, key industry, communications, etc, as well as provide a visual aid on the last turn's attacks (where the combat is happening), last turn's bombing runs, an many more features that I want to experiment with (related to the actual locaton of your units). This is all very ambitious, I know, but I believe it's all achieveable. I really want to benefit from all the features I can from ToT, TOTPP and Lua as back in the day I was really limited with MGE (and I was a kid with lesser standards of quality

This is what I plan to do with the additional maps:


Pablostuka said:
I'm still not taking advantage of: ToT multi-maps. I have been going through some ideas (I hope innovative enough) that I want to implement here in my SCW revamp, and with Lua it will be possible:

- Main map: Current map with units, cities, etc, good old civ game, this is where all action will occur. Nothing new here.
- Political map: A quick "read-only" map showing what territory currently controls each tribe featuring plain simple colours (like any standard political maps). Helpful to see how the frontlines progress, the different regions, borders, etc. Lua will maintain each tile in this map depending on how frontlines progress in the main map (on city captured, etc).
- Weather map: I plan to have a randomly generated weather engine written in Lua for the scenario which will be based on seasons (extracted from the current turn) and geographical areas/regions as per realistic climate behaviours in Spain. Whatever current weather conditions occur on each tile and turn (and this "read-only" map will display them as in a real weather map, with symbols, etc) will affect combat happening in the main map introducing extra combat variables. From the heavy rains and muddy fields of the battle of Guadalajara (march 1937), the freezing -20°C and deep snow of the battle of Teruel in winter 1937 to the scorching over 40°C of the Ebro battle in summer 1938, the very variable climatic conditions in Spain really affected the historical events depicted in the scenario.
- Strategic map: Another "read-only" map which shows in detail important objectives, industrial and military resources, and where the combat is currently happening.

All sounds crazy, right? well, I'll try to get it implemented and working

So I finished the political map for the start of the game: 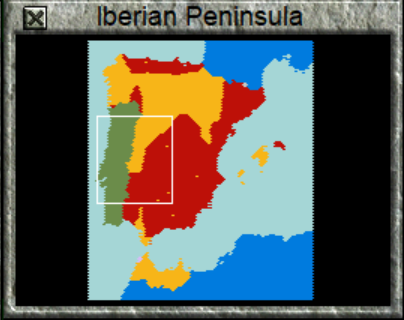 And main view with small zoom: 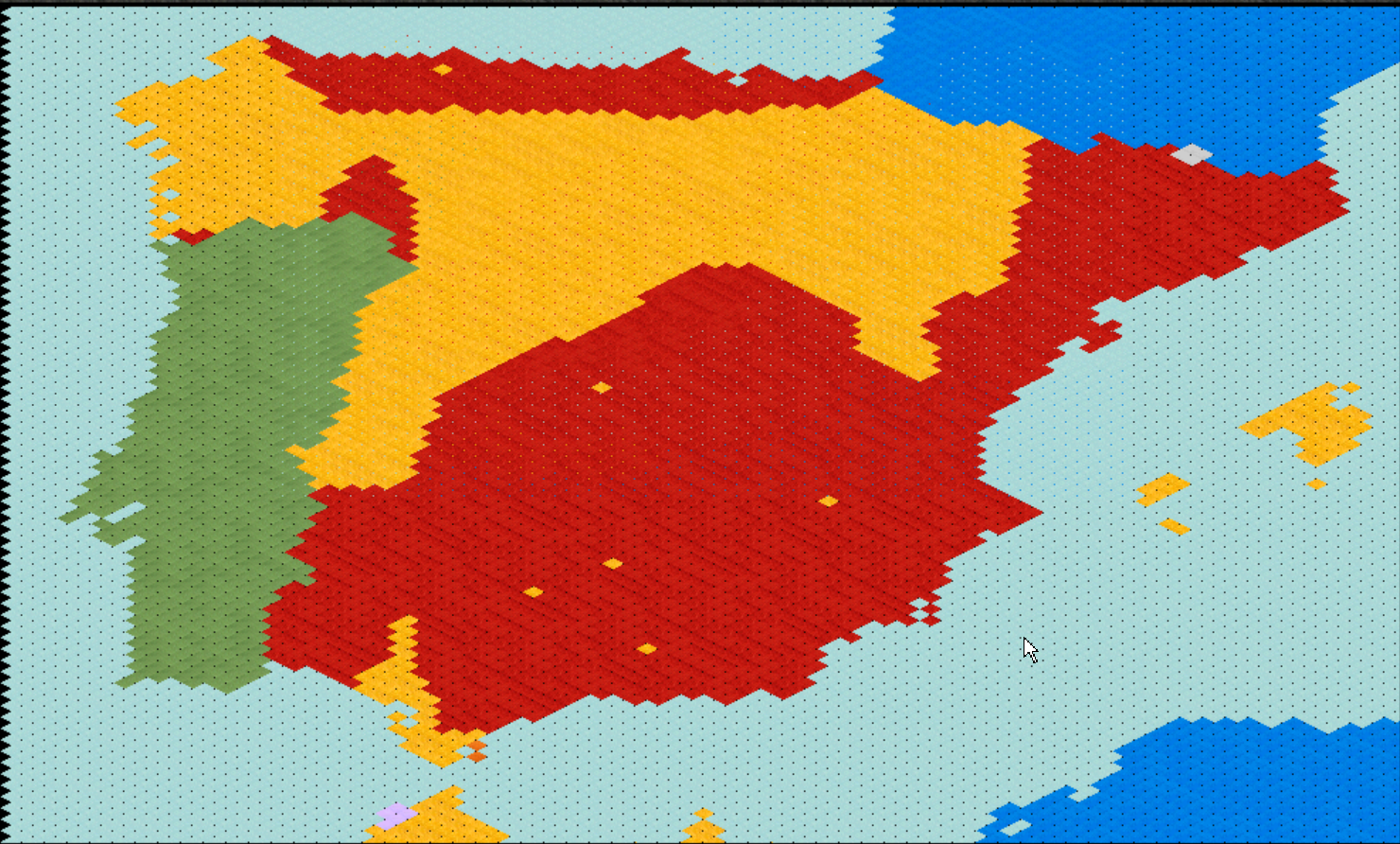 Next will be either the strategic or the weather map. Once all .MP files are ready I'll be able to start a new "sci-fi/fantasy" game from scratch using these and import all my game data, then hopefully the 4 maps will be integrated in the game without issues (cities disappearing, etc)

Looks really interesting. I assume Portugal/France will be off limits to both sides and if so how do you intend to make it so (Impassable terrain borders or some kind of border unit)?

tootall_2012 said:
Looks really interesting. I assume Portugal/France will be off limits to both sides and if so how do you intend to make it so (Impassable terrain borders or some kind of border unit)?
Click to expand...

Lua again, on move unit. If player tries to enter in another country's territory, show a pop up message, then cancel the move. With this, no need to "waste" a valuable unit or terrain slot, as checking the same coordinates where the unit is moving to in map 2 will tell me which country the unit is moving to. Or probably have a list defined of "impassable" coordinates, whatever makes more sense.

There will be an exception, because if the Nationalist player takes certain decisions (reaches certain techs), then they will be able to enter Portuguese territory. This is what actually happened historically, as Nationalist troops were allowed passage through Portugal while the road from Sevilla through Extremadura to the north was controlled by the Republican side. Salazar helped Franco in multiple ways, not only sending "volunteers", and the free transit was one of these "favours".

Preparing some icons for the new strategic map...still putting my thoughts together on what I want to display there and how

The weekend was quite productive, but I still have room for many options for the strategic map...need to think if I want to include more markers 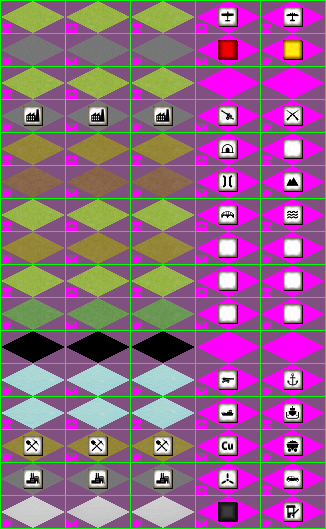 To rest from maps and icons, I started with the improvement images.

I love the TOT feature to be able to use custom photos! It adds a lot for the historical immersion 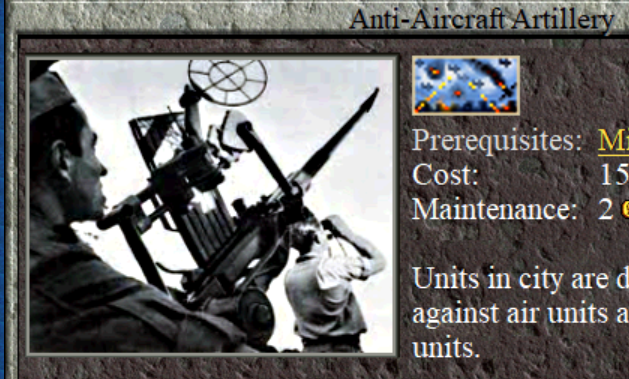 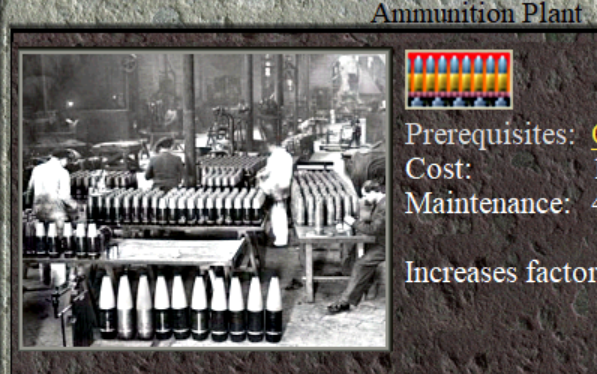 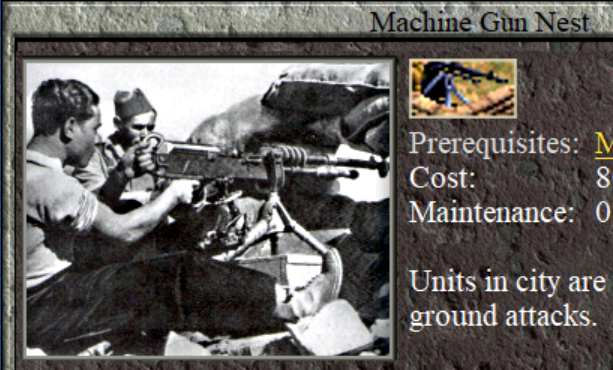 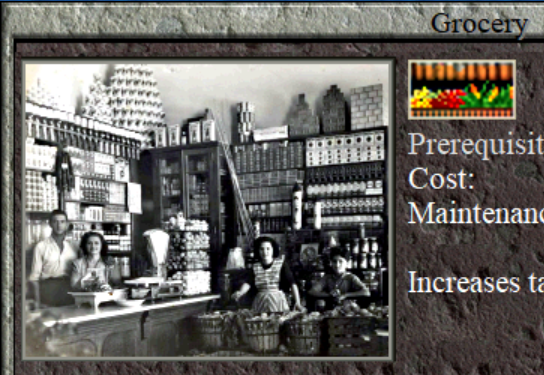 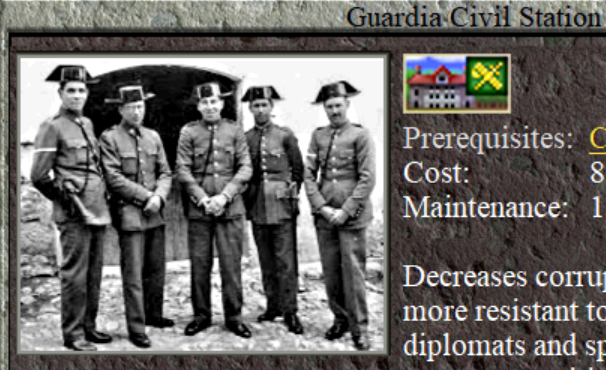 Another weekend is finished and this time I completed the work required in the icons and improvements files, plus had all the custom photos for each building/wonder (finding, resizing, adjusting, etc...not a trivial task!

Next: either go back to the tedious strategic map or I'll work on the dialog and city graphics. I have no patience for repetitive tasks!

Getting there...I'm working on different backgrounds and buttons for each side. Still loads of work left... but I hate the original grey textures and I'm quite happy

But some weird pixels don't look as they are supposed to! 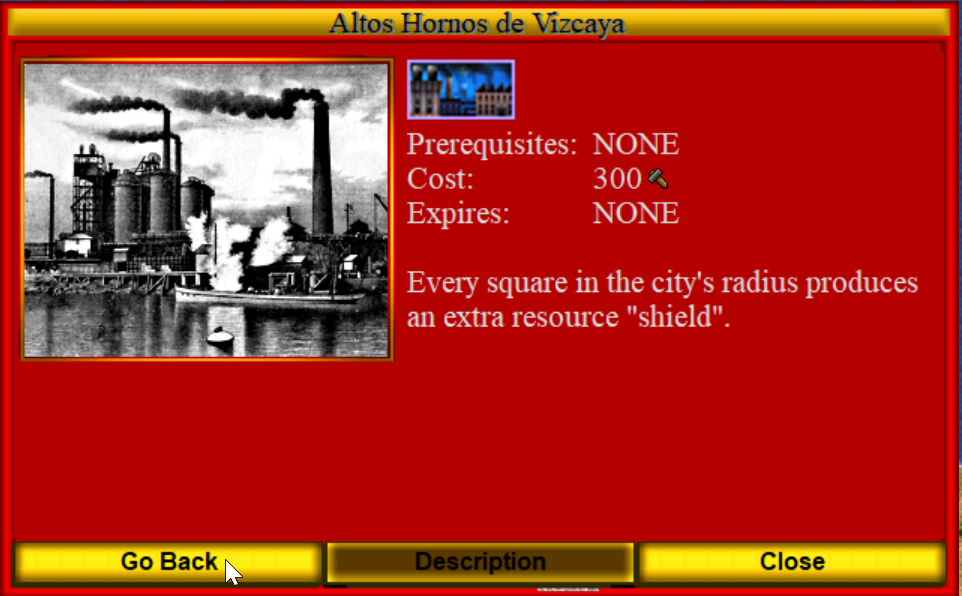 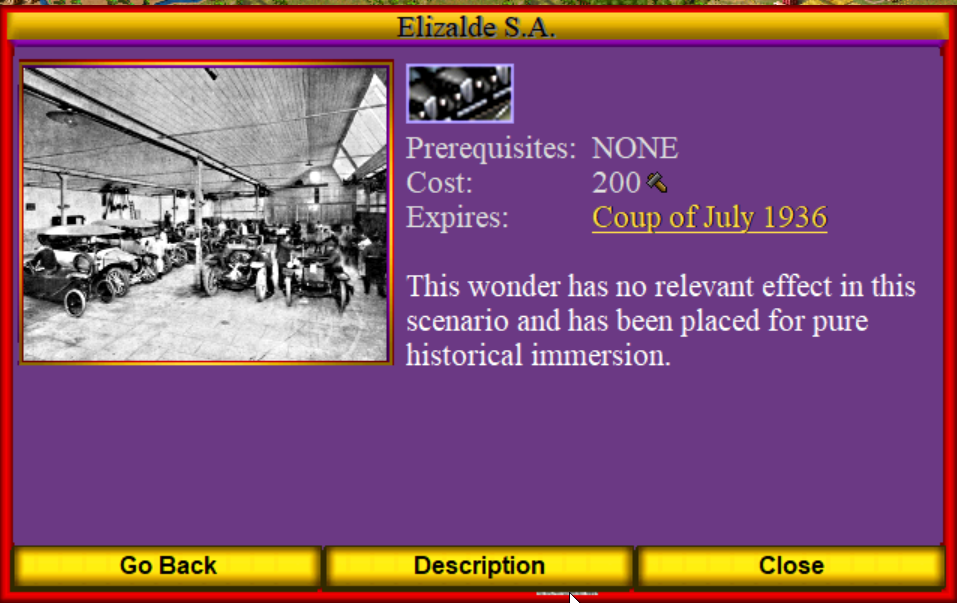 L
Is there a definitive list/source for downloading "complete" TOT/TOTPP scenarios?